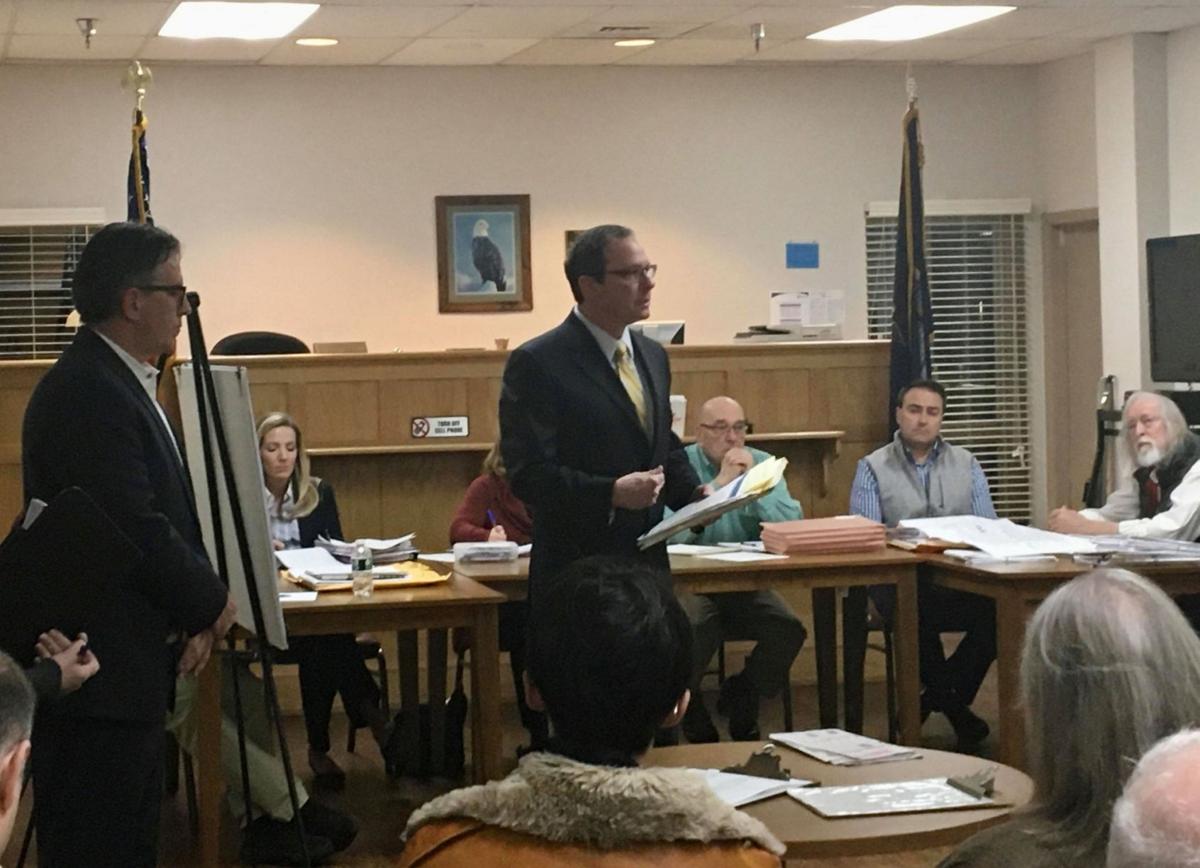 Amanda Purcell/Columbia-Greene MediaAttorney Paul Freeman speaks on behalf of People USA, a nonprofit based in Poughkeepsie that is proposing a detox center in Greenport, on Tuesday at the Greenport Planning Board meeting held at 600 Town Hall Drive. 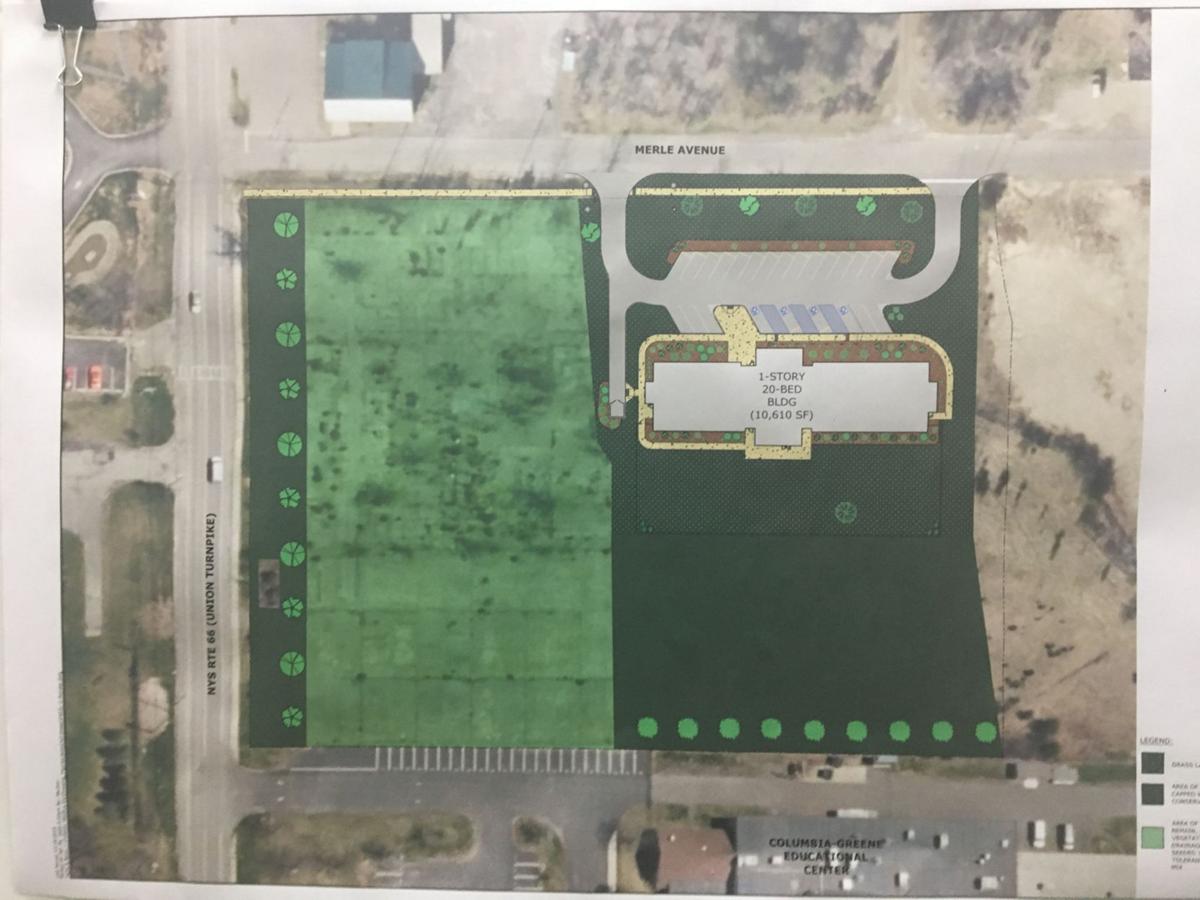 Amanda Purcell/Columbia-Greene MediaPlans for a 20-bed, medically supervised withdrawal stabilization facility at 1.5 acres near the corner of Merle Avenue and Route 66 were approved Tuesday at the Greenport Planning Board meeting held at 600 Town Hall Drive.

Amanda Purcell/Columbia-Greene MediaAttorney Paul Freeman speaks on behalf of People USA, a nonprofit based in Poughkeepsie that is proposing a detox center in Greenport, on Tuesday at the Greenport Planning Board meeting held at 600 Town Hall Drive.

Amanda Purcell/Columbia-Greene MediaPlans for a 20-bed, medically supervised withdrawal stabilization facility at 1.5 acres near the corner of Merle Avenue and Route 66 were approved Tuesday at the Greenport Planning Board meeting held at 600 Town Hall Drive.

GREENPORT — The detox center for the corner of Merle Avenue and Route 66 was approved unanimously by the Greenport Planning Board on Wednesday.

More than 40 people attended the public hearing on the project Tuesday, with several residents from outside Greenport in attendance.

The proposed 10,610-square-foot, 20-bed, medically supervised withdrawal and stabilization facility on 1.5 acres at Merle Avenue and Route 66, would open within 9 to 12 months.

The single-story building would serve as a place for patients to seek help and get referrals and transportation to a recovery center.

“It is a stopgap, to help somebody who voluntarily wants to get help, who is suffering from addiction,” attorney Paul Freeman said on behalf of People USA [the nonprofit proposing the project] on Tuesday at the meeting held at 600 Town Hall Drive. “...Columbia and Greene counties are two of the worst per capita opioid trouble spots in the entire state of New York.”

Eight people spoke during the public hearing. All of the speakers were in favor of the project.

Hudson Mayor Kamal Johnson attended and offered his support for the project.

“The trend is going down across all of the other counties in New York State, except for Columbia and Greene counties,” Johnson said. “The only way we can stop this epidemic and get people real help and save lives, is if we change the narrative and we have facilities like this.”

The detox center is one pathway to recovery and one component but there is still a long way to go in bringing the recovery process to the county, Hudson Police Commissioner Peter Volkmann said Wednesday.

“I think it is a great thing that we’re able to bring resources immediately available to Columbia and Greene,” Volkmann said Wednesday. “This is just one component in dealing with this crisis. The detox will help people begin that process of recovery and it will help us greatly. Before, we would have to drive 45 minutes to Albany or Kingston for a detox resource.”

People USA is a nonprofit organization that provides people living with mental health or substance abuse issues with peer services and behavioral health care, according to its website.

Planning Board Chairman Edward Stiffler reiterated concerns for the neighbors of the detox center. The facility would be built across from an apartment complex, The Falls, a day care and Questar III on Route 66.

Patients typically will stay at the facility anywhere from 1 day to 7 days, with most patients staying an average of 4 days. Nurses will staff the facility 24 hours a day, and a medical doctor will be at the facility during the day and on call during the evening hours. The staff will help the patients through the withdrawal process and entering a rehabilitation facility.

The parking lot, with 24 spaces, will face Merle Avenue, will primarily be used by employees.

The project will be set back from the highway several hundred feet to give privacy and quiet to the patients.

The facility is strictly for detox, not mental health treatment, Miccio said.

Hudson 4th Ward Supervisor Linda Mussmann, a co-founder of Columbia County Bail Fund, said she supports the project on behalf of many people who had just been released from jail and were seeking treatment.

“Many of them have needed to this facility badly,” Mussmann said. “Some had to go to faraway places or couldn’t get in one at all.”

The project has received preliminary approval from state Office of Alcohol and Substance Abuse Services. It is also touted as part of an effort by Gov. Andrew Cuomo to combat the opioid crisis in New York State, said attorney Paul Freeman, who is working on the project on behalf of People USA.

You don’t “detox” without competent mental health. I’m proposing, in court, that we convert the monster new jail in Coxsackie to a legitimate treatment/medical center. We don’t have a hospital in Greene County and continue to be the worst in terms of opioid addiction.

The jail was NEVER justified and was forced by overt fraud. RicciGreene lied. Delaware lied. Katerskill lied, then recanted. Barton and Loguidice avoided, then made a report to rehab 80 Bridge St. for $3.8 million, cheap.

County Law § 216 REQUIRES the Sheriff’s office to be in Catskill. So, rehab 80 Bridge Street, put the Sheriff’s Office back there with a few holding cells (not a jail, so not required to comply with jail regulations - just holding cells), and convert the monster in Coxsackie to a rehab/medical facility (without SCOC oversight). Add some actual psychiatrists and PhD psychologists.