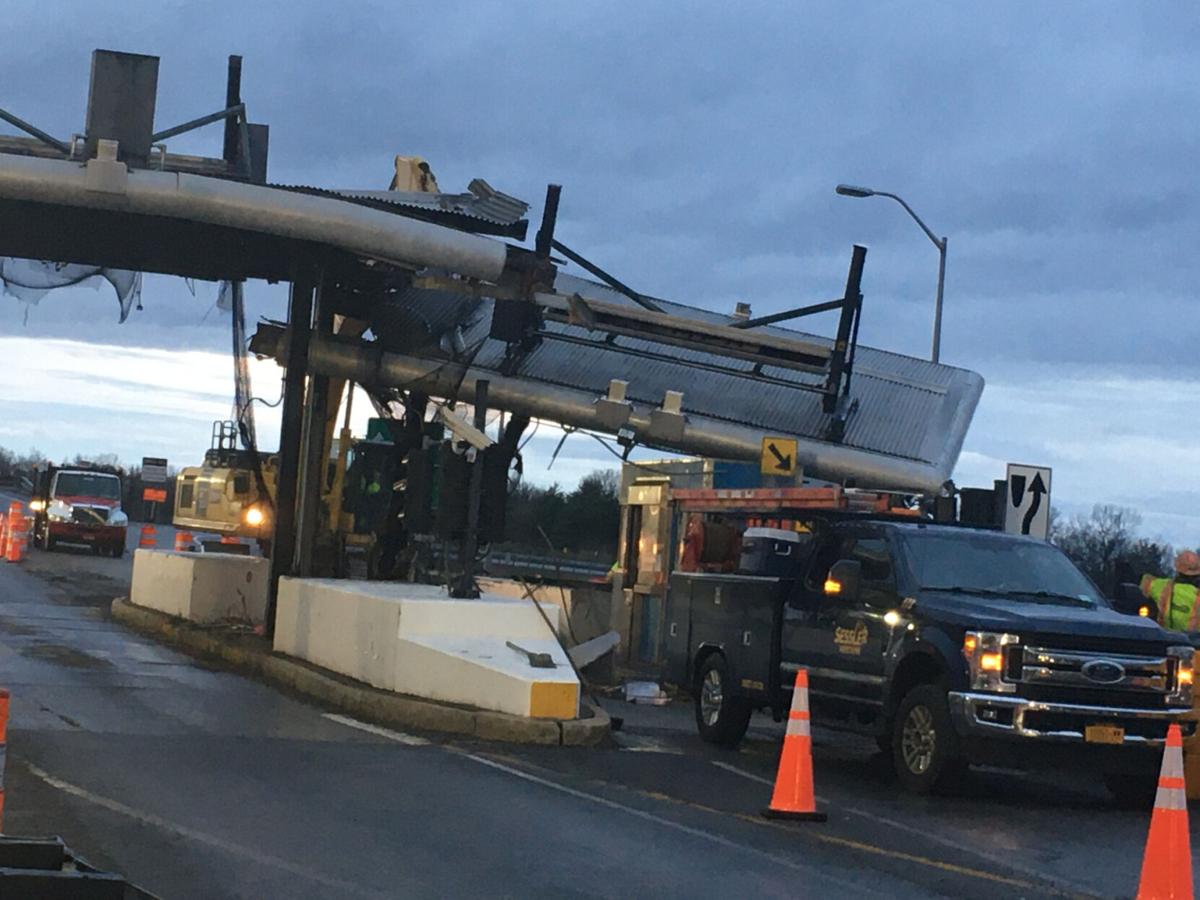 The canopy above the Exit 21B tollbooths is torn down. Melanie Lekocevic/Columbia-Greene Media 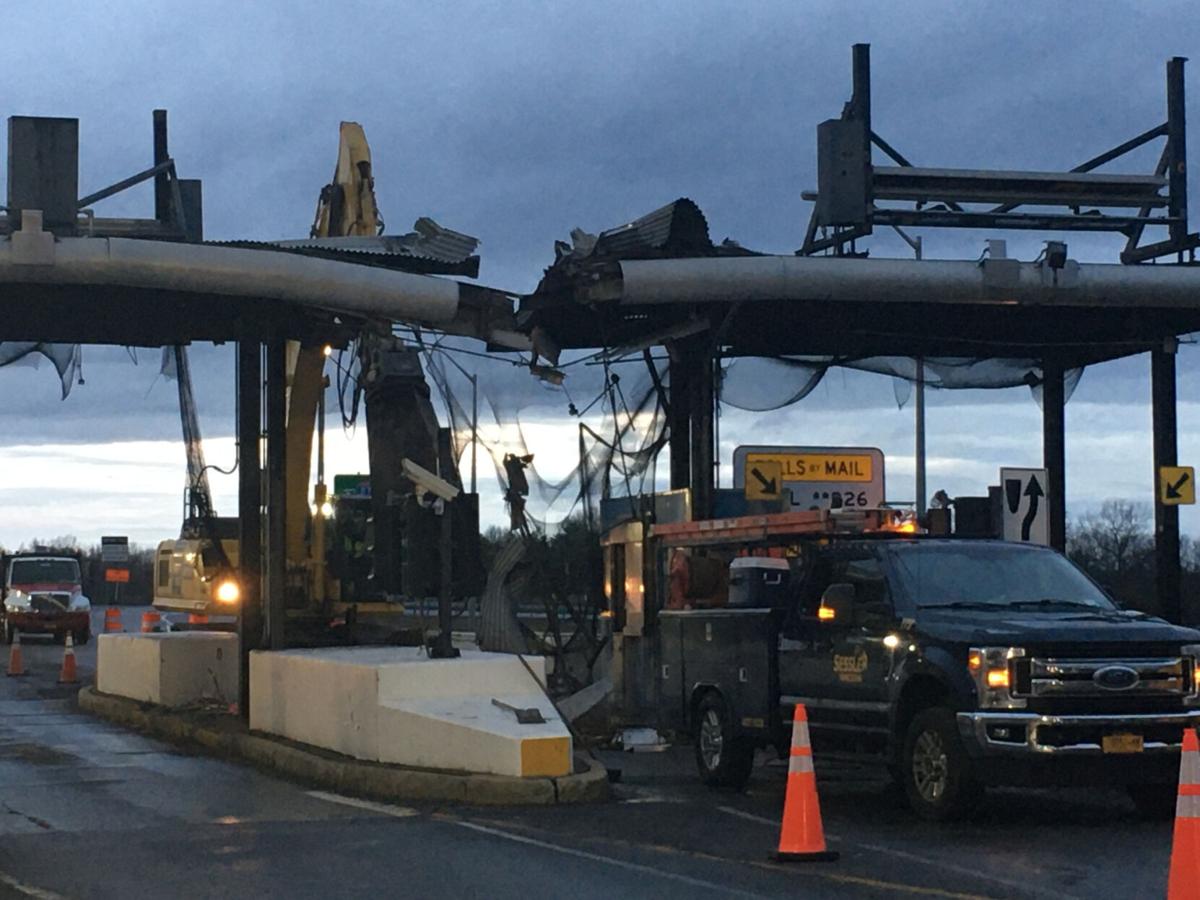 A wrecking crew makes the first break in the canopy above the Exit 21B tollbooths Monday evening in preparation for the booths’ removal. Melanie Lekocevic/Columbia-Greene Media 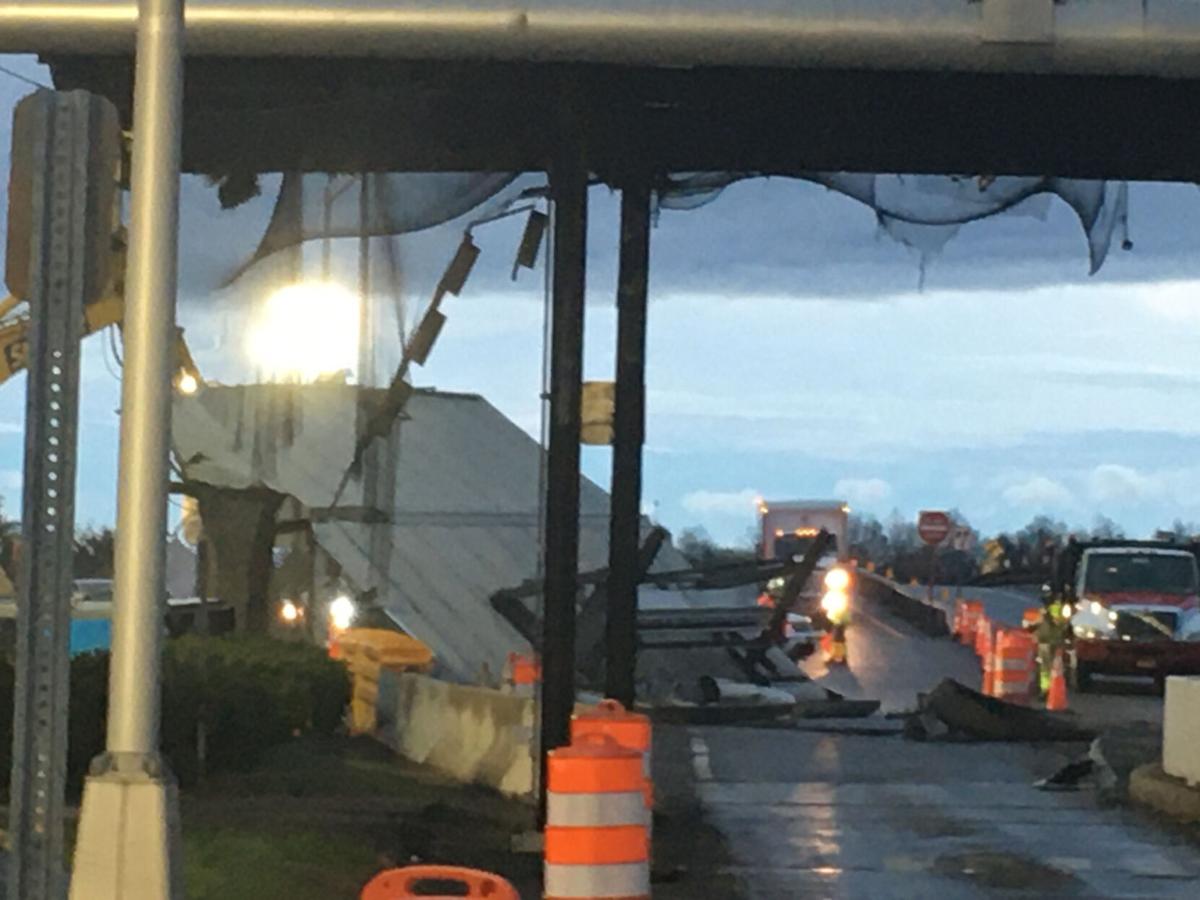 A construction vehicle drags the Exit 21B canopy off the road following its demolition. Melanie Lekocevic/Columbia-Greene Media

The canopy above the Exit 21B tollbooths is torn down. Melanie Lekocevic/Columbia-Greene Media

A wrecking crew makes the first break in the canopy above the Exit 21B tollbooths Monday evening in preparation for the booths’ removal. Melanie Lekocevic/Columbia-Greene Media

A construction vehicle drags the Exit 21B canopy off the road following its demolition. Melanie Lekocevic/Columbia-Greene Media

COXSACKIE — Demolition of the toll plaza at Exit 21B of the New York State Thruway began Monday evening.

The booths are being demolished as part of the state’s shift to cashless tolling, which began in November.

Construction vehicles began preparing the area around 6 p.m. Monday, keeping one lane of traffic open in each direction, entering and exiting the Thruway.

The first step was creating a break in the canopy that hangs above the tollbooths as one section where vehicles enter the Thruway was prepared for removal.

At around 7:15 p.m. traffic was stopped as the demolition equipment moved in.

The canopy emitted a loud bang as it came crashing down safely.

It took about 10 minutes for the wrecking crew to tear down a portion of the canopy and drag it to the side of the road for removal.

The entire toll plaza will be demolished over the course of about a week, Jonathan Dougherty, deputy director of media relations and communications for the New York State Thruway Authority, said last week.

“They go lane by lane and dismantle it in pieces,” Dougherty said.

The Thruway moved to cashless tolling in November, with drivers passing through electronic gantries on the road and near Thruway entry and exit ramps, where tolls are deducted from their E-ZPass units or their license plate is photographed for Toll by Mail. Cashless tolling went into effect Nov. 14.

Demolition of the tollbooths is the second part of the two-phase, $355 million project.

The Exit 21 toll plaza in Catskill is slated for demolition in June.

To date, roughly 15 of the 52 former toll plazas have been removed, Dougherty said Tuesday.

“When completed, 52 toll plazas, approximately 230 individual tollbooths, will be removed, creating highway speed, true open-road tolling by the end of summer 2021, weather permitting,” Dougherty said. “As construction continues, drivers should expect traffic shifts and increased construction activities near toll plazas. Motorists should use caution while driving in these areas, as they will be active construction zones with 20 mph posted speed limits until the tollbooths are completely removed and interchanges reconfigured.”

The New York State Thruway Authority was created in 1944 when Gov. Thomas E. Dewey authorized construction of the thoroughfare, the first superhighway running from New York City to Buffalo, according to thruway.ny.gov. Ground was broken for the project in Liverpool in 1946.

The first toll collectors were hired and trained in 1954, and assigned to the first toll stations between Lowell and Rochester, which was the first completed portion of the Thruway to open to traffic.

Cashless Tolling Constructors, LLC, was awarded the project to covert the ticketed system to cashless tolling in June 2019.

“The conversion to cashless tolling is one of the largest projects in the Thruway’s 66-year history,” Thruway Authority Executive Director Matthew Driscoll said in a statement when cashless tolling was announced in November. “This unprecedented achievement is a significant milestone that will modernize the Thruway system for millions of drivers and ushers in a new era for toll collection that will benefit generations to come.”