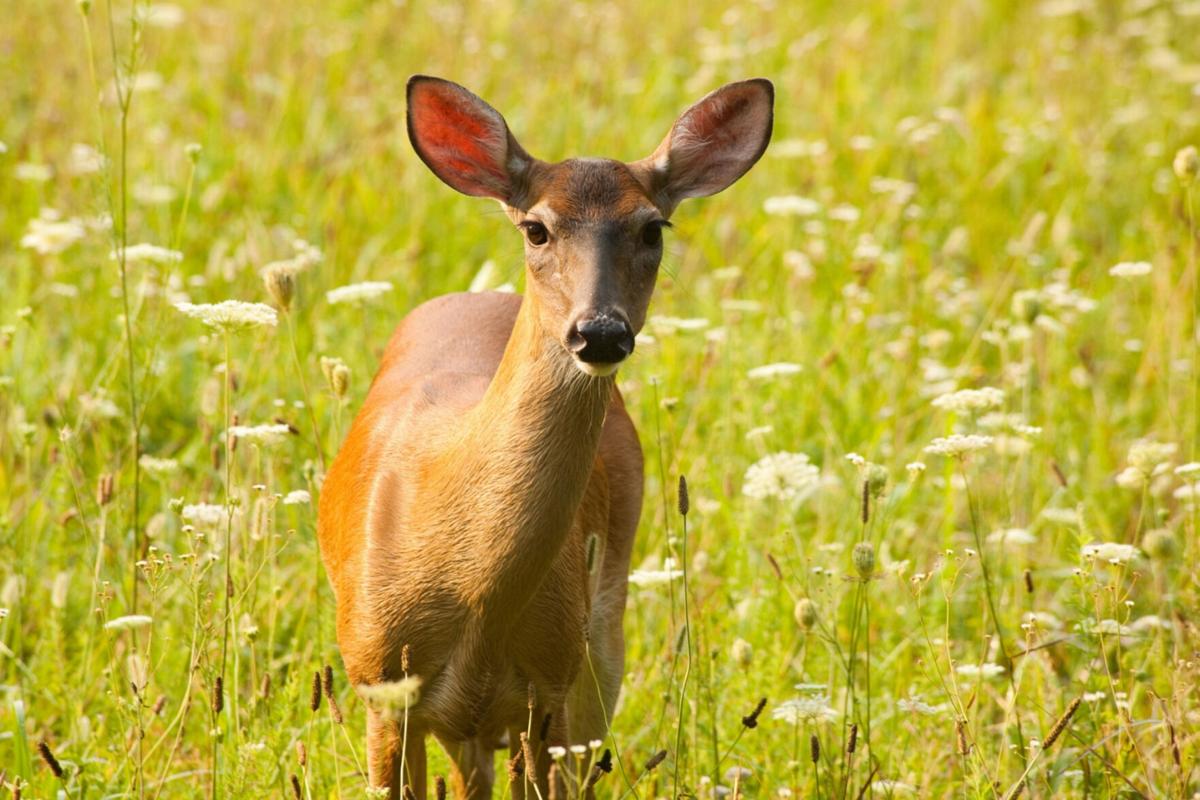 The number of deceased deer in upstate New York has more than doubled in the last three weeks. Courtesy of Department of Environmental Conservation 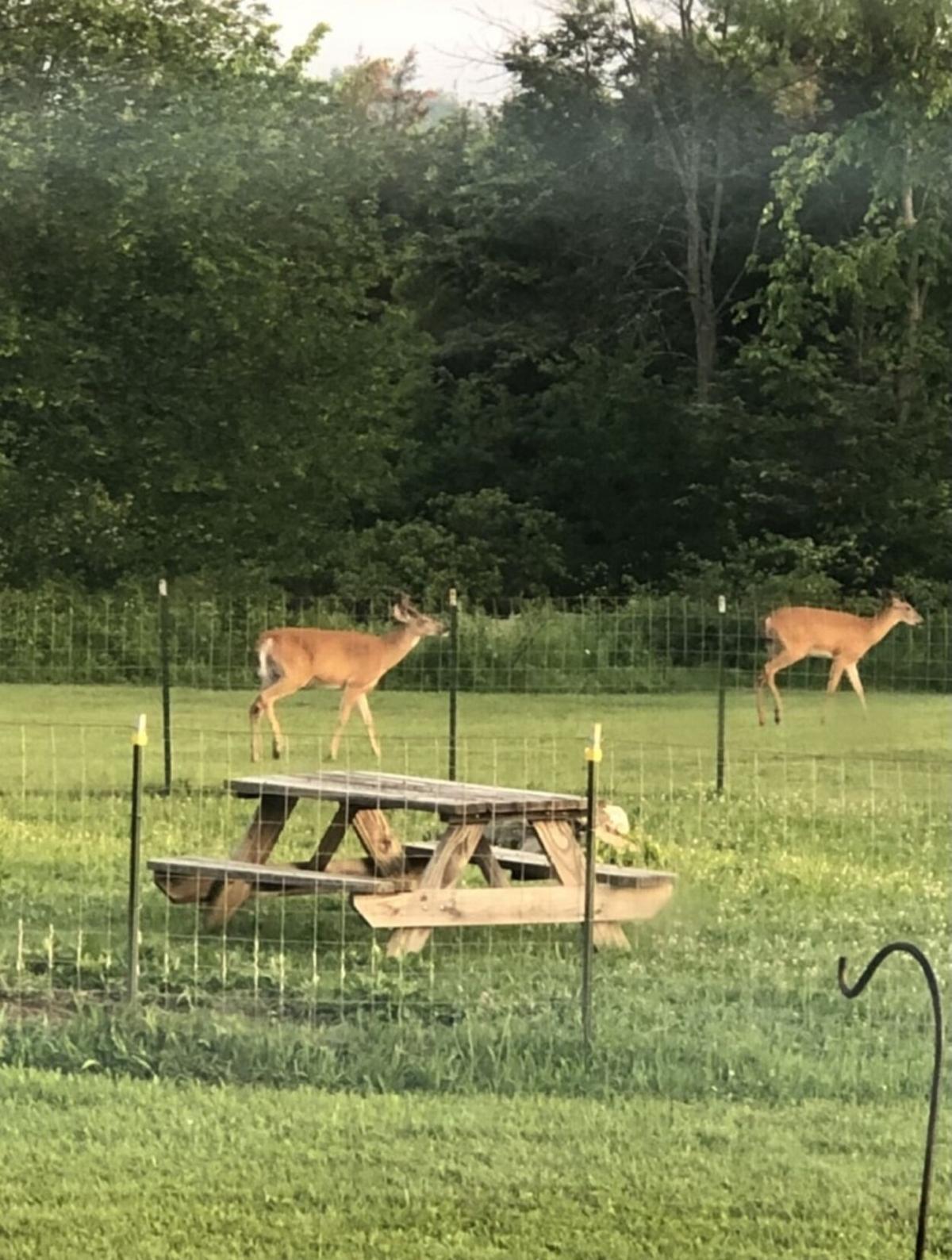 There are many fewer deer in Columbia and Greene counties following the EHD virus outbreak. Contributed photo 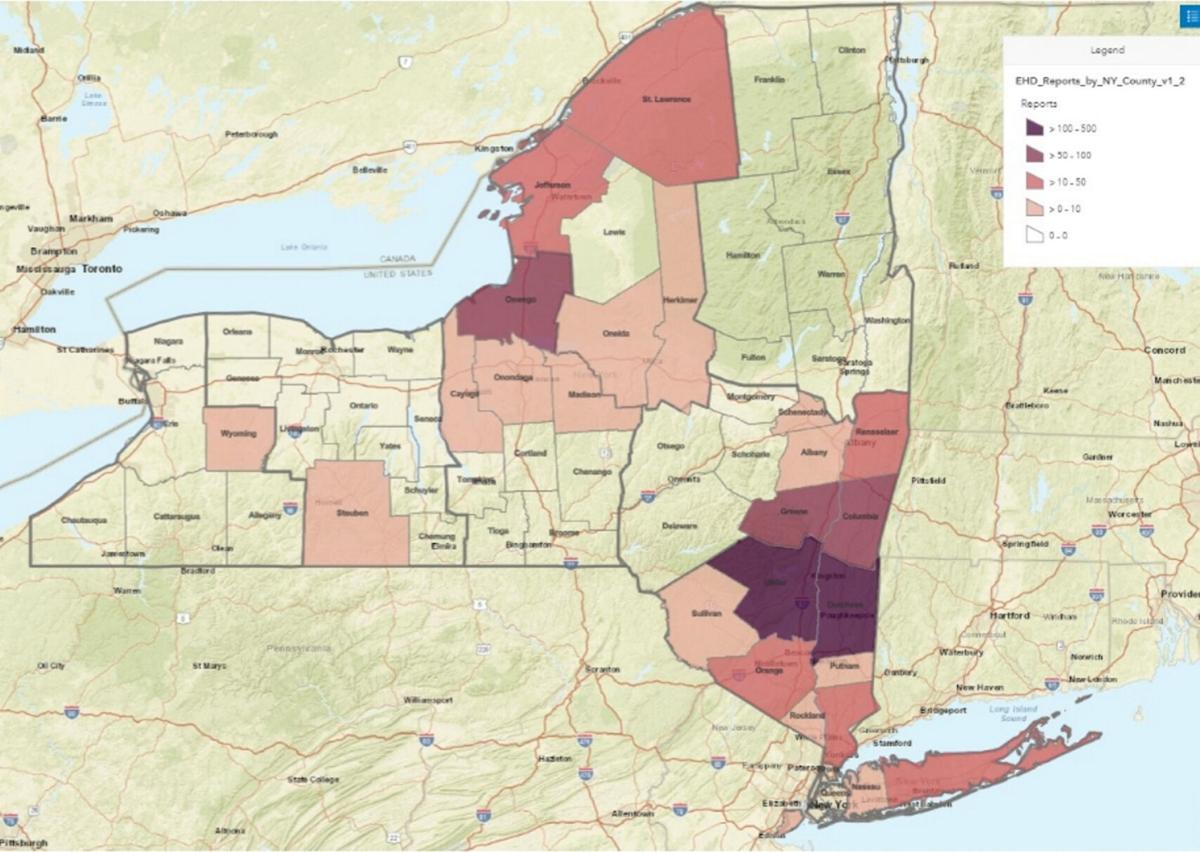 Showing the counties affected by deceased deer in upstate New York. The total has more than doubled in the last three weeks. Chart courtesy of Department of Environmental Conservation

The number of deceased deer in upstate New York has more than doubled in the last three weeks. Courtesy of Department of Environmental Conservation

There are many fewer deer in Columbia and Greene counties following the EHD virus outbreak. Contributed photo

Showing the counties affected by deceased deer in upstate New York. The total has more than doubled in the last three weeks. Chart courtesy of Department of Environmental Conservation

Greene County reported 110 deer have been killed in a severe virus outbreak that has decimated the deer population in a contiguous four-county area in less than a month, according to the state Department of Environmental Conservation.

The number of deer that have been found dead in upstate New York has more than doubled in the past three weeks, according to the DEC.

The total number of deceased deer cases under investigation Wednesday was 1,521. That’s up from 700 on Sept. 16.

The vast majority of the affected deer are in the mid-Hudson Valley region, according to data from DEC.

Columbia County reports 183 deer are dead. But that number is dwarfed by the numbers in Dutchess and Ulster counties. Dutchess County has reported 312 dead deer, and Ulster County leads the state with 505 cases, according to the DEC.

The disease is not transmissible to humans, Miller said.

Symptoms of the virus include fever, hemorrhaging in muscles or organs and swelling of the head, neck, tongue and lips. A deer infected with EHD may appear lame or dehydrated, Miller said.

Infected deer will frequently seek out water sources and many that succumb to the disease are found near a water source.

There is no treatment for EHD and no means to prevent it, Miller said. Dead deer cannot pass the infection to other animals. The virus has been in New York since July and has had time to circulate and spread prior to the first killing frosts. Consequently, it has been more widespread this year than during previous outbreaks, Miller said.

EHD outbreaks do not have a significant long-term impact on regional deer populations, but deer mortality can be significant in small geographic areas.

In New York, the virus that causes EHD is typically fatal for deer. It is transmitted by biting midges, small insects sometimes called “no-see-ums” or “punkies.”

The disease is not spread from deer to deer and humans cannot be infected by deer or bites from midges, Miller said.

Once infected with the EHD virus, deer usually die within 36 hours, Miller said.

EHD outbreaks are most common in the late summer and early fall when midges are abundant, although initial cases this year were detected in late July.

Sightings of sick or dead deer that are suspected of having EHD can be reported to DEC with a new online reporting form available at dec.ny.gov/animals or by contacting the nearest DEC Regional Wildlife Office, Miller said.

DEC has alerted Department of Agriculture and Markets veterinarians in the region to be aware of the disease and to report suspicious cases among captive deer, Miller said.

The presence of the EHD virus was first confirmed in New York state in 2007 with relatively small outbreaks in Albany, Rensselaer and Niagara counties, and in Rockland County in 2011. From early September to late October 2020, a large EHD outbreak occurred in the lower Hudson Valley, centered in Putnam and Orange counties, with an estimated 1,500 deer mortalities.