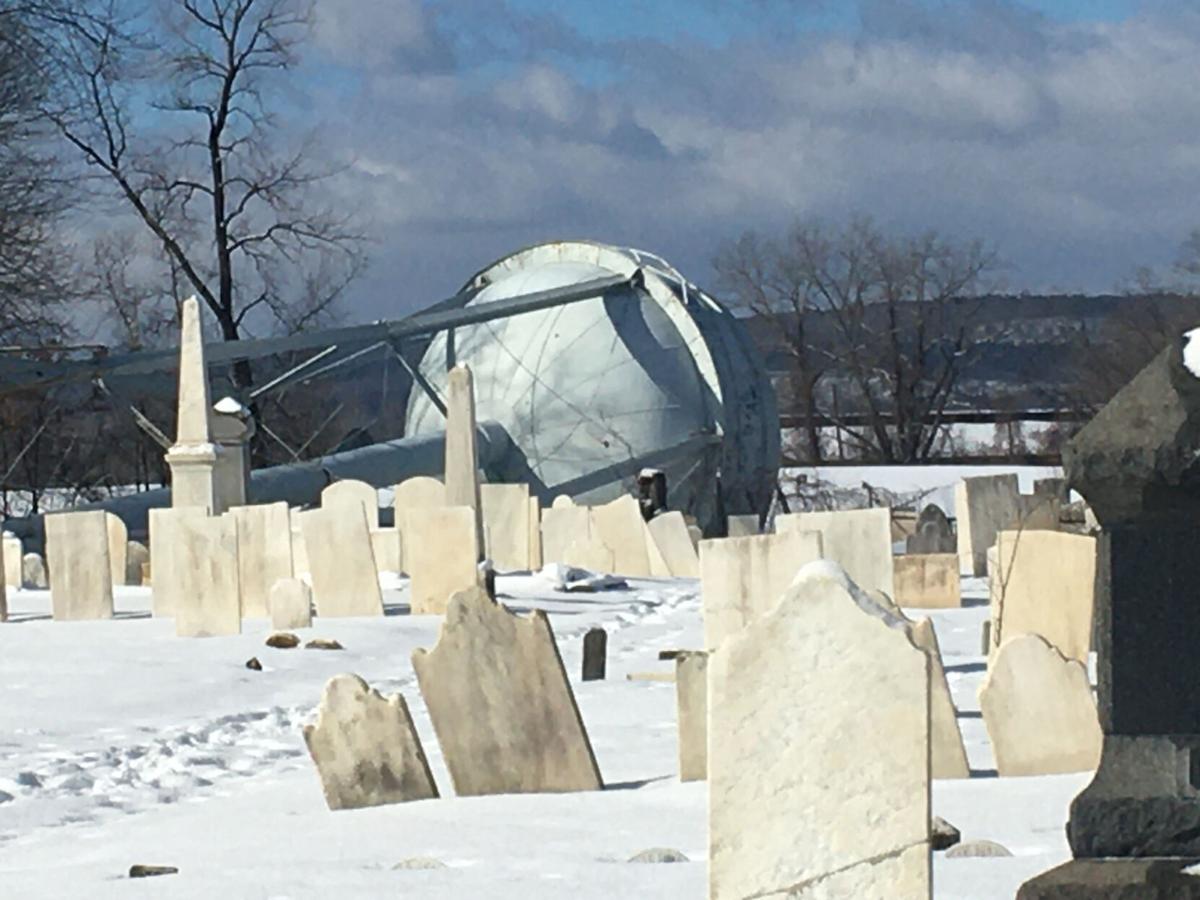 The Coxsackie water tower after it was razed Saturday morning. Melanie Lekocevic/Columbia-Greene Media 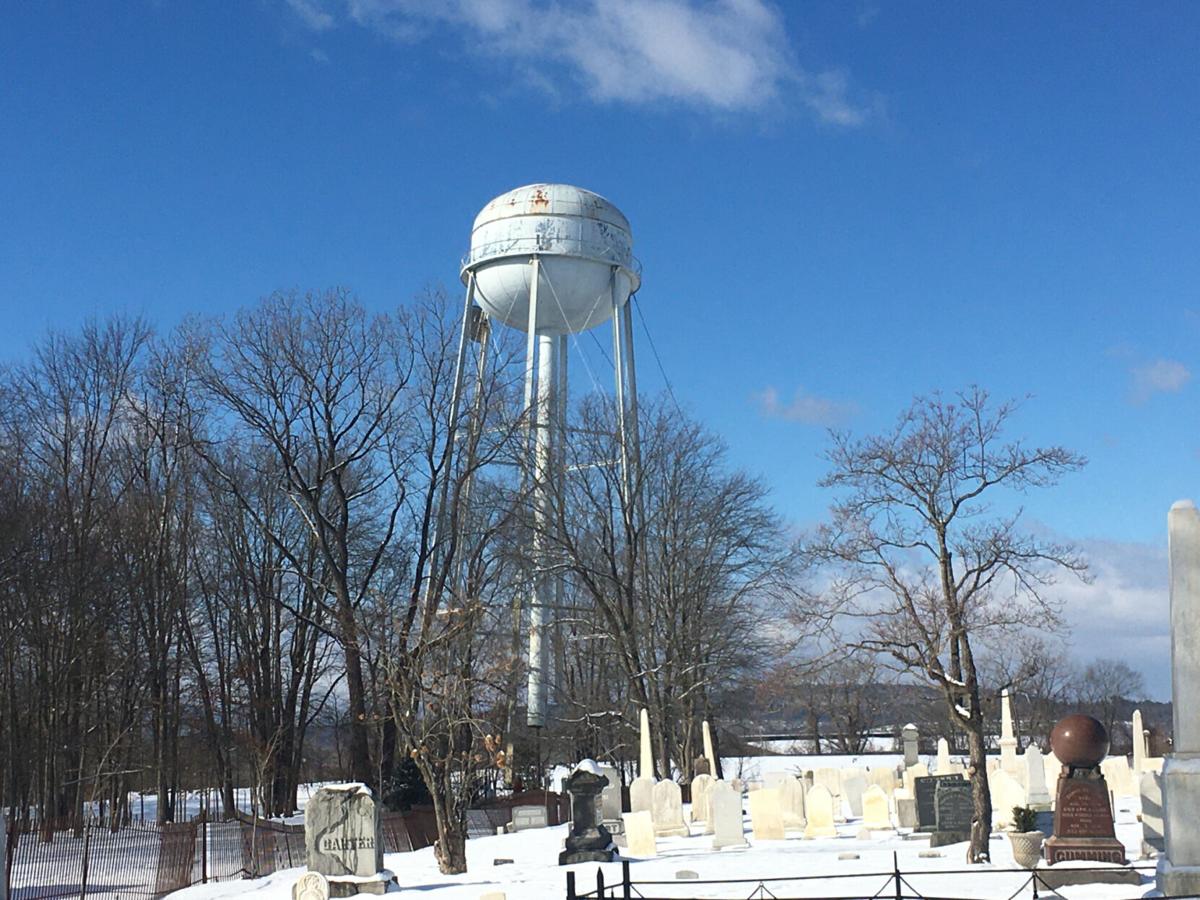 The Coxsackie water tower after it was razed Saturday morning. Melanie Lekocevic/Columbia-Greene Media

COXSACKIE — With a boom but little fanfare, the old Coxsackie water tower near Mansion Street was demolished Saturday morning.

Dozens of residents lined the street and watched from the Coxsackie Senior Center parking lot as the tower came down at 10 a.m.

“It was the end of an era. That’s why I am here,” said Coxsackie resident Pat Meyers.

A muted bang took down the decades-old tower behind the Coxsackie cemetery as spectators watched in awe along Mansion Street.

“It was very exciting to watch it,” said Dulce Juusola, of Cairo.

The water tower has not been in use for years, said Alan Tavener from Delaware Engineering, the village’s engineering company, who was on hand to watch the demolition.

“The village contracted with Wargo Demolition to bring it down. They were the contractor who did it,” Tavener said. “It was obsolete, pieces of it were falling off and it hasn’t been in use in many years.”

Prior to demolition the tower was inspected and found to be free of asbestos or any other contaminants, Tavener said.

“It’s made of steel, there is no asbestos or any contaminated materials, so it will just be hauled off to Albany for scrap,” Tavener said.

The tower was located on land purchased by the village of Coxsackie in 1941, but it is unclear exactly when it was built because the United States entered World War II shortly after, Town Historian Michael Rausch said after the tower was razed.

The water tower used to supply the village with water, but hasn’t been used in some time.

“They have been trying to get this down for years,” Rausch said. “It hasn’t been in service for quite a while. It used to service the village.”

The property where the Climax Reservoir is located was purchased by the village of Coxsackie in 1940 and water was piped in to the tower from there.

“It served the village for decades, starting whenever it was built,” Rausch said.

At one point, the water tower also supplied the former American Valve factory that was adjacent to it, Tavener said.

American Valve was sued by the state and the Department of Environmental Conservation in 2000 to pay for the cleanup of the site where the factory once stood, which was found to be contaminated by lead and toxic solvents after the factory closed down, according to the state Attorney General’s Office website.

A (corrupt) reason to build a sheriff's office and jail and homeless Gulag in Coxsackie is to get our county to pay for Coxsackie’s water system upgrade. Martinez appointed his friend as the ethics chair for the county. Pathetic.

Dude. Give it a rest already. Spreading your toxicity all over this “media outlet”. HV360 is not your soap box.

"our county".... I don't understand why you would consider it yours, considering all you do is put it down.

I one would think you would be happy about the homeless gulag, at least you have a back-up plan if things don't work out at four seasons, right?

He wants to talk about professionalism? That's comical considering everybody has seen the video of him on the surveillance cam getting in people's faces, the only professional thing about it was the way the deputy locked his a** up. He's like some kind of retarded terrorist.

And his numerous arrests for DUI, violation of a restraining order, his filing of frivolous law suits etc. He's a professional idiot.

Anyone can Google search his name and read about his interesting antics. One of those traffic stops they initiated a sobriety check. He used 9/11 PTSD as an excuse for his erratic behavior. Now I don’t know about you, but I have close friends that were actually in Manhattan during that tragedy and that pulled their friends and fellow coworkers from the rubble. Disgusting behavior on his behalf, in my opinion.

Every town has a village idiot. Catskill has theirs. Scott Myers has that distinction.

I know who Coxsackie’s is!