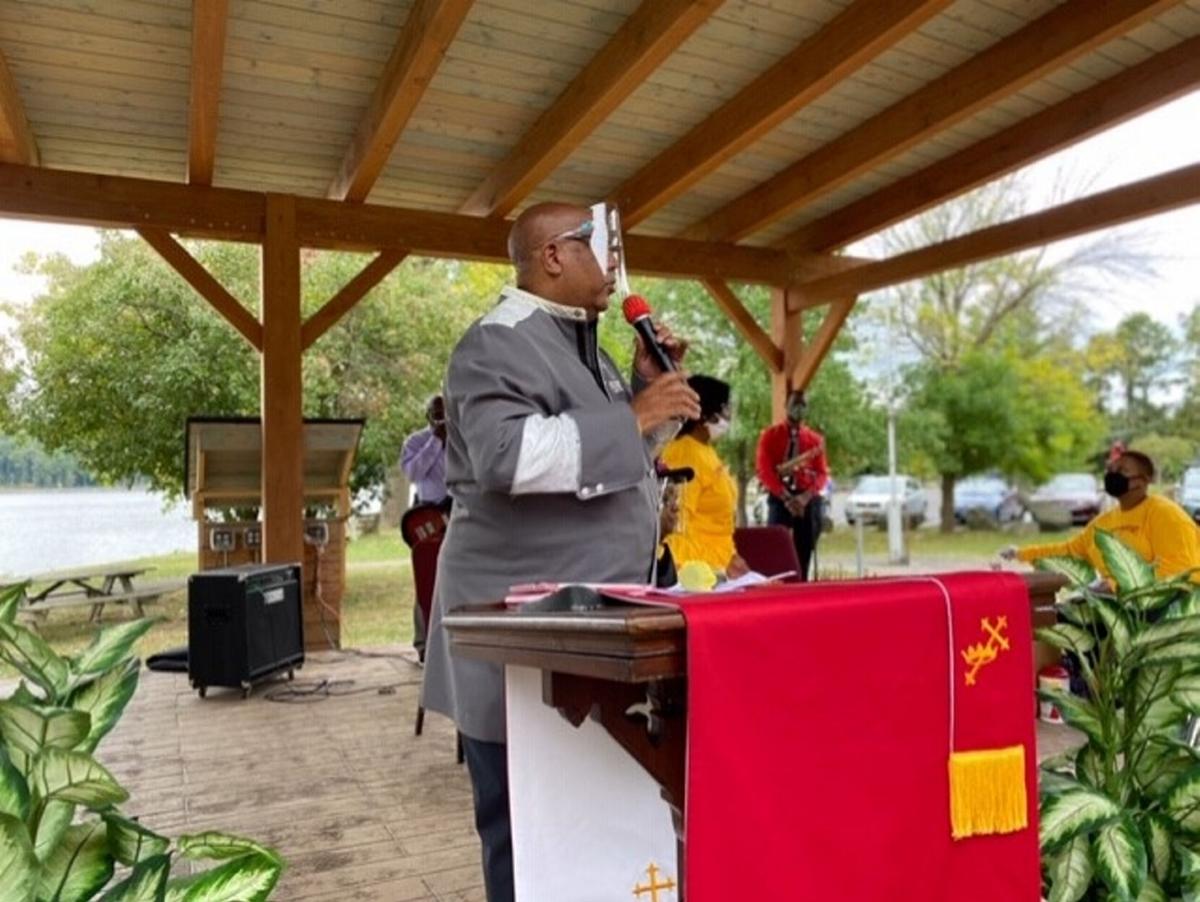 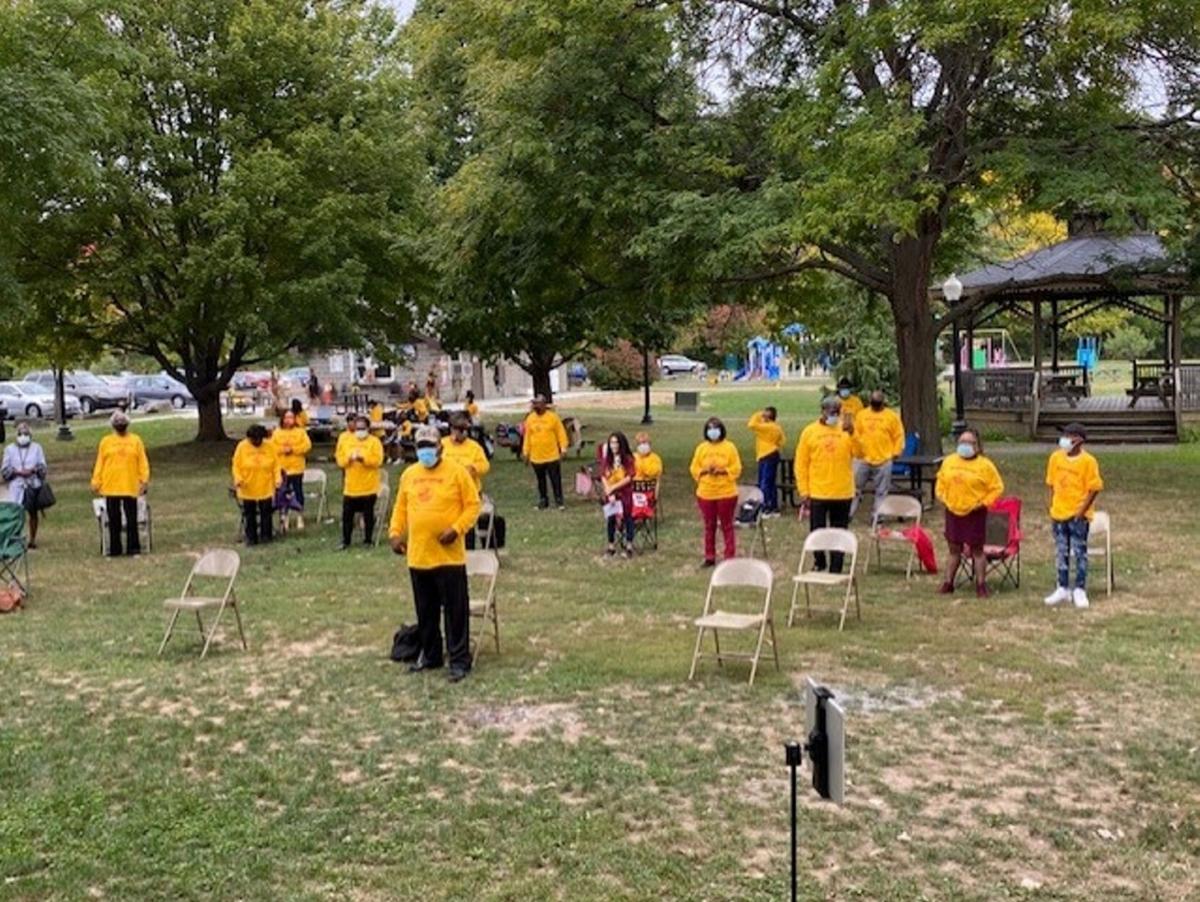 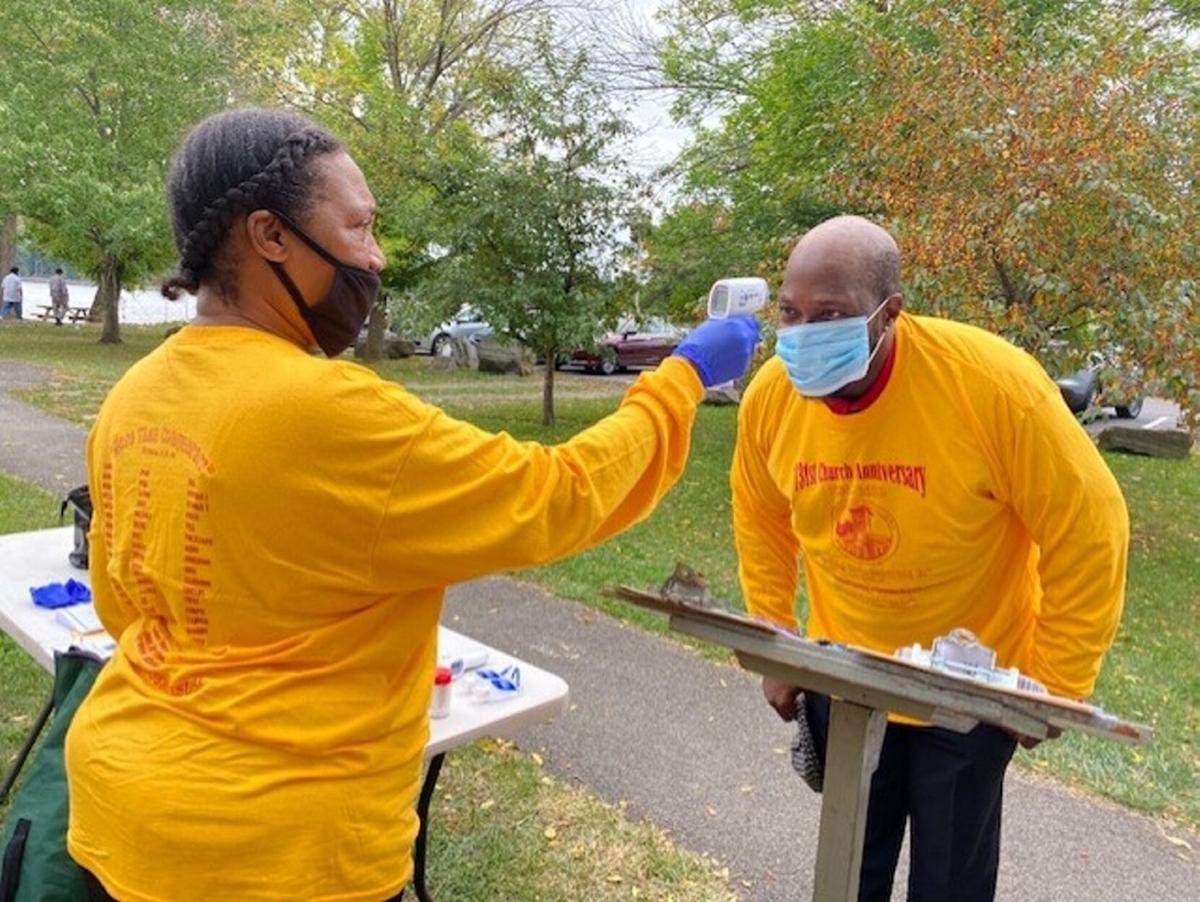 Congregants' temperatures were taken as a precaution against spreading the coronavirus. Contributed photo

Congregants' temperatures were taken as a precaution against spreading the coronavirus. Contributed photo

CATSKILL — When the Second Baptist Church of Catskill marked its 131st anniversary Sunday, it had another reason for celebration.

It was the congregation’s first in-person service since the onset of the COVID-19 pandemic.

Built in 1895, the church has a history of overcoming obstacles and beating back adversity.

Although COVID-19 altered the annual celebration, the community came together at Dutchman’s Landing for worship, song and a to-go barbecue.

“It was our first time being physically back together in worship since March 15,” the Rev. Richard Turpin said Wednesday.

About 70 congregants and an unknown number of spectators and passersby were part of the event.

“After 131 years of serving the community, it even seemed closer in what God would have us do by worshiping out in the community and not behind the closed doors of the church,” Turpin said.

“There were passersby that stopped to receive the singing and the words that were going forth,” she said. “There were people on boats who stopped rowing their boats and sat on the water and enjoyed the church service. Men, women and children that came together excitedly and brought lawn chairs.”

The annual celebration serves as a reminder to the community of the support the church offers, the Rev. Richard Turpin said.

“It’s to remind the community that the church is not a regular house but a house of faith and God,” he said. “When there’s anything going wrong, there’s a house we can come to called the church to relieve our pain and relieve our fears because we are followers of Christ.”

Attendants were asked to sanitize their hands and masks were required, the Rev. Richard Turpin said.

“We did provide masks for anyone who did not have one,” he said.

Second Baptist received donations from Fidelis Care and Deacon Wayne Neal. In addition to the to-go barbecue, school supplies were distributed to youth and a voter registration booth was available.

“Everyone did something to make sure that we had a safe and enjoyable time together on Sunday,” the Rev. Suzette Turpin said.

In addition to COVID considerations, the worship services also took into account the racial heritage of the church.

“We have a segment within our church called Black Lives Matter,” the Rev. Suzette Turpin said. “In light of our current culture, I highlighted some of the accomplishments by Black individuals, those trailblazers that have come before us. If it had not been for their words and their efforts and their faith, we would not be celebrating 131 years.”

The state Department of Health in 1995 ruled the church was structurally unsafe, causing the congregation to move services to the Catskill Community Center and Hop-O-Nose activities building for seven years, the Rev. Suzette Turpin said.

“They helped with fundraising, providing labor, soliciting labor and carrying on the spiritual elements of the church while the church was uninhabitable,” she said. “We came together as a church family as we worked on the church.”

The church received its certificate of occupancy in 2004, the Rev. Suzette Turpin said.

COVID-19 has actually increased the size of the congregation, the Rev. Richard Turpin said.

“COVID has added to our numbers but it also eliminated us from doing the social programs and little contests and special incentives because we could not come together,” he said. “On a bigger scale, it brought out more people who had not been to church and embers from all churches because we all are in the same position and couldn’t open our doors.”

At the church’s 129th anniversary celebration, the congregation decorated tables with the colors, symbols and food of one of the 12 tribes of Israel and gave a three-minute presentation.

“Due to the weather, we had our last outdoor service for the year,” the Rev. Richard Turpin said. “We will be waiting for Gov. [Andrew] Cuomo to allow us to go back to our full congregation coming together in one service. Until then we will use Facebook, Zoom and conference calling to conduct our worship services and our Bible studies.”

All are welcome at the church, the Rev. Richard Turpin said.

“Thank you to the community for receiving the help and the support that we give to you,” Turpin said. “Everyone is welcome to the church that love rebuilt.”

Congratulations on the 131st Anniversary for the congregation. One of the pillars of the Catskill area community. Blessings to all.