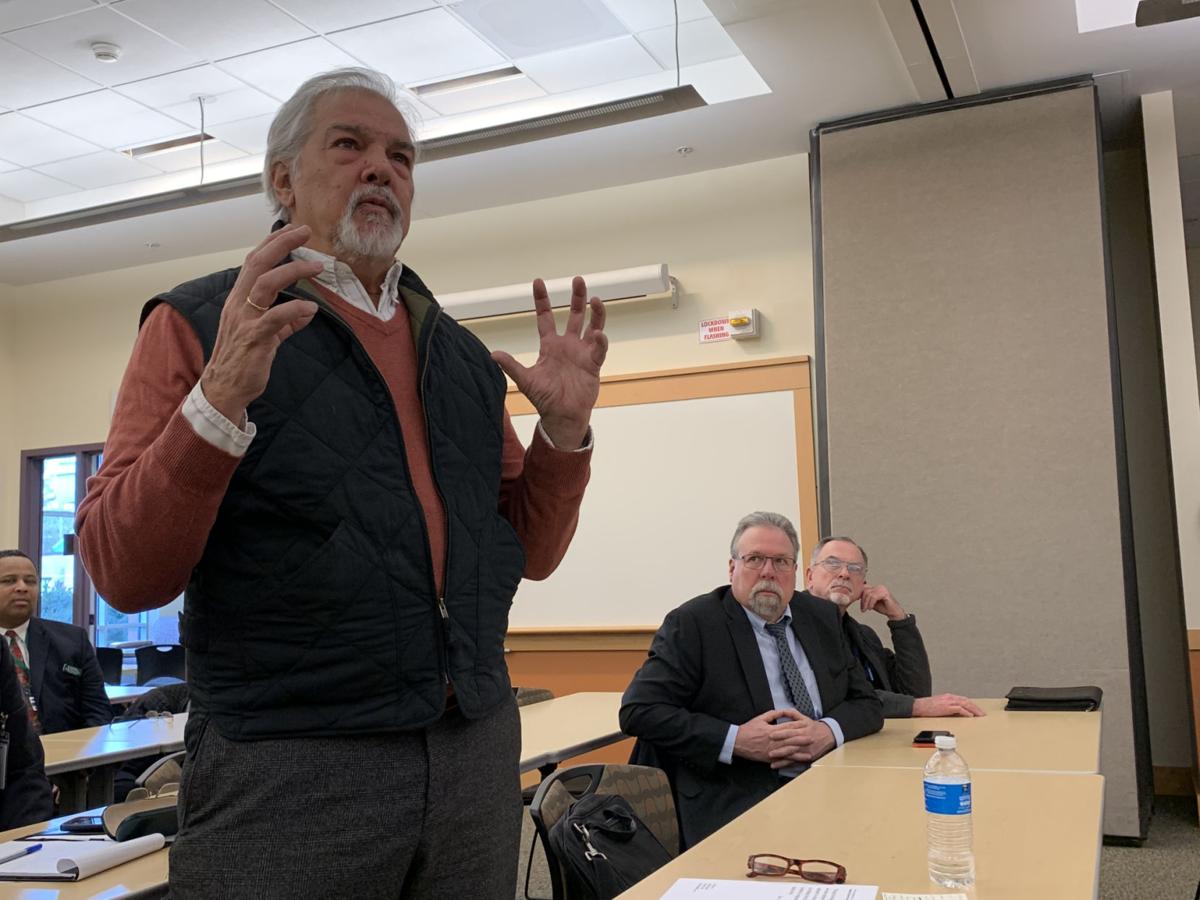 Kate Lisa/Johnson Newspaper Corporation Catskill resident Hudson Talbott, a member of the Thomas Cole Board of Trustees, speaking about the negative impact a proposed merger of the state Bridge and Thruway authorities would have on the region. Talbott spoke about his concerns Wednesday following a presentation about the 2021 state budget at Columbia-Greene Community College. 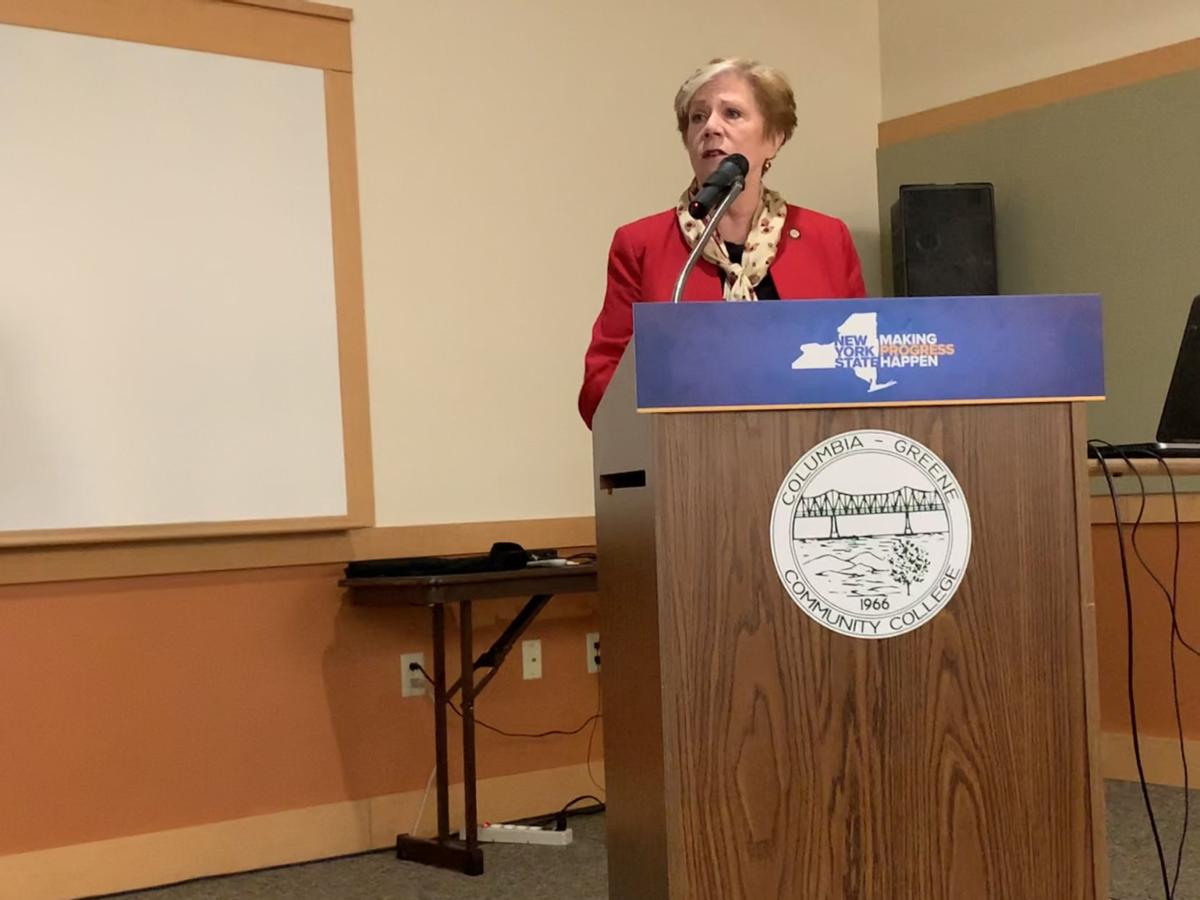 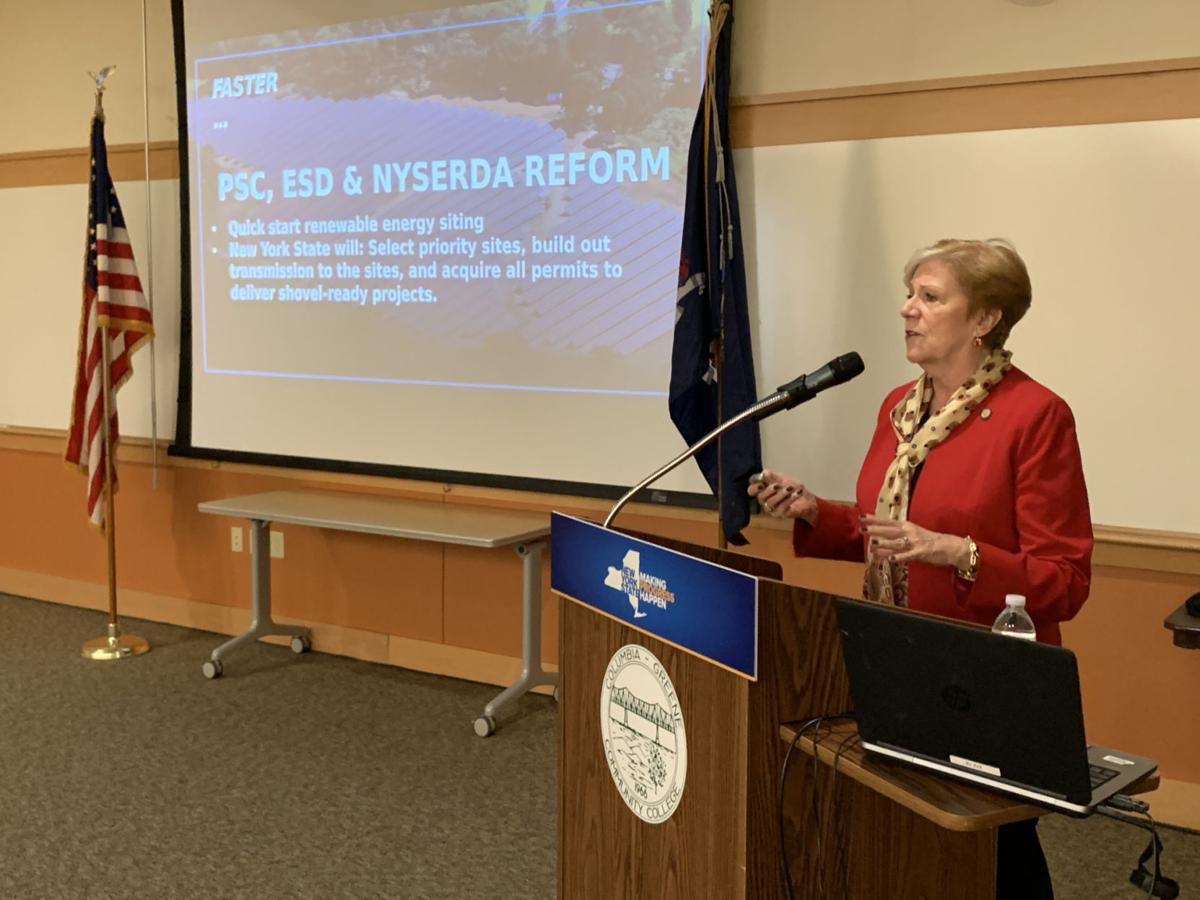 Kate Lisa/Johnson Newspaper Corporation Catskill resident Hudson Talbott, a member of the Thomas Cole Board of Trustees, speaking about the negative impact a proposed merger of the state Bridge and Thruway authorities would have on the region. Talbott spoke about his concerns Wednesday following a presentation about the 2021 state budget at Columbia-Greene Community College.

GREENPORT — Residents and officials questioned the governor’s proposal to abolish the state Bridge Authority on Wednesday following a 2021 budget presentation with several representatives.

Reardon reviewed the state’s Fiscal Year 2021 budget Wednesday, highlighting Cuomo’s vision for the coming year. The governor’s budget is a roughly 2% increase over the previous year and includes money allotted to tackle several issues, including a $33 billion, five-year plan to tackle climate change to restore the environment and reduce carbon output.

“New York continues to lead the country as the country’s progressive capital,” Reardon said. “We must and we will continue to make that progress continue in our state.”

One of the Cuomo’s budget proposals is to abolish the state Bridge Authority and merge it with the state Thruway Authority.

Children’s author Hudson Talbott, of Catskill, who sits on the Thomas Cole House Board of Trustees, stood to voice his concerns about the proposed merger following Wednesday’s presentation.

The Rip Van Winkle Bridge connects the Olana State Historic and the Thomas Cole National Historic sites. Talbott brought up the Hudson River Skywalk — a new walkway connecting the Thomas Cole site with Frederic Church’s Olana, which opened last June — and how numbers at the Cole House have more than doubled since.

“But it’s more than that — it’s about creating this identity that’s attracting people,” Talbott said. “We have become the Hudson River School region, and that all started with the Bridge Authority. They are important neighbors and citizens of our region, and I am very concerned about the loss of that.

“The Bridge Authority isn’t technically economic development, but it virtually is for us,” Talbott said. “There might be a cost saving if you conflate the two, but we are probably going to lose, in other ways, generating income for our region.”

Both authorities are in the process of converting to cashless tolling by the end of 2020.

“There will be no disruption to the operations of the Bridge Authority, and tolls will continue to be kept among the lowest in the nation, serving the authority’s operational and capital needs and keeping its long-term capital plan intact,” according to a Feb. 13 statement from Thruway Authority Executive Director Matthew J. Driscoll.

“While the two authorities will merge operationally, their revenue and how it is utilized will, and must be, invested to support their operations and capital programs,” he said. “Bringing these authorities together will streamline administrative functions to reduce duplication, achieve economies of scale in purchasing and contracting and deliver savings to toll payers.”

The area’s partnership with the Bridge Authority is critical to attract visitors and tourists to the area, Olana Partnership President Sean Sawyer said.

“And what makes this a distinctive place to live and visit as a tourist,” Sawyer said. “The partnership we’ve had is unique to the regional construct the authority has provided since 1932. It’s essential to our identity, to attracting visitors, permanent residents and businesses.”

The Olana Partnership employs about 40 people, Sawyer said, adding half of them live across the river in Greene County.

“They are terrified — making radical carpool plans because the toll could go up,” Sawyer said. “It’s very much an economic development and tourism issue.”

“Thirty-nine percent of our students live in Greene County,” Drummer said. “Many of them struggle to pay the toll as it is. Should that toll be increased, it will be devastating for that population of students.”

Reardon urged residents to send letters to their local and state representatives or contact the appropriate Regional Economic Development Council with comments about the state’s 2021 spending plan.

Twin County representatives on both sides of the aisle Wednesday took a stand against the possible Bridge Authority merger.

“This reeks of the governor’s textbook gamesmanship,” Assemblyman Chris Tague, R-102, said. “The Bridge Authority is one of the most efficient agencies in the state, so naturally, Cuomo is targeting it as a potential revenue source. He’s got a massive budget hole and budget season is right around the corner. I say, let the authority remain on its own as a functional and necessary part of the river’s economy. It’s already successful. If it’s not broke, why does Cuomo want to fix it?”

“Gov. Cuomo’s proposed merger of the New York State Bridge Authority and the New York State Thruway Authority is a bridge to increased tolls and decreased bridge maintenance,” Jordan said. “I have real concerns about such a merger driving up tolls for local motorists who utilize the Rip Van Winkle Bridge for their daily commutes.”

“I join with my fellow Hudson Valley colleagues to oppose this proposal and to urge the governor to remove it as part of his 30-day amendments and keep the highly efficient and effective Bridge Authority independent as it was originally intended,” Barrett said in a statement. “The Bridge Authority was established...to ensure smooth and affordable travel across the Hudson River and to keep these bridges, which function predominantly as local roads for the Hudson Valley, independent from the fiscal stresses of the state’s finances.”

The five bridges serve tens of thousands of commuters, Barrett said, and are solely funded by their tolls. The authority employs 190 local workers and connects communities on both sides of the Hudson River.

“Indeed, abolishing the Bridge Authority runs a real risk of leading to increased tolls for drivers and a seriously negative impact on our Hudson Valley economy and communities,” Barrett said. “The Bridge Authority keeps these Hudson Valley landmarks operating safely and efficiently, consistently earning top bond and quality ratings...This system [links] both sides of the Hudson River for residents and others who travel back and forth to school, work, doctor’s appointments, religious services, family visits and more. This is a true case of ‘If it’s not broken, why fix it?’”

The merger could affect the Thomas Cole and Olana historic sites, Jordan said.

“How would a merger affect these two vital cultural, historical institutions and impact area tourism?” the senator asked. “Ultimately, the proposed merger is bad for motorists, bad for business, bad for tourism, and bad for the Hudson Valley, which is why I will oppose it moving forward. The governor needs to listen to the serious and substantive community concerns from the people who live and work here.”

The governor’s nearly $178 billion proposal is a roughly 2% increase over the previous year and includes money allotted to address several issues, including a $33 billion, five-year plan to tackle climate change to restore the environment and reduce carbon output — including the $3 billion Restore Mother Nature Bond Act.

“This is critical money to take care of the infrastructure that has frankly been battered by the change of the weather, the rising of the lakes, the overflowing of the rivers...We have to make sure we restore that so we don’t lose the very nature we depend on,” Reardon said. “This is critical and it has to be done.”

Next year’s proposed spending plan increases the state’s infrastructure program by $25 billion, raising it to $275 billion, according to Cuomo’s executive Budget Book on the governor’s website. The infrastructure program includes $11.8 million for Albany Corning Preserve Bike and Pedestrian Connector Ramp, $14.7 million for bridge deck replacement on Interstate 90 over Fuller Road/I-90, over Erie Boulevard, and $9.5 million to construct a new linear park or pedestrian access to the Hudson River along the I-787 Clinton Avenue ramp in Albany.

The state will also make investments to expand the e-vehicle industry, an extra $10 million for the census with $1.2 million for the Capital Region, increase funding to address homelessness, forming a panel to lower the cost of prescription drugs, capping insulin co-payments at $100 a month, a permanent ban of flavored e-cigarettes, closing the out-of-state conviction loophole, passing a domestic terrorism law, funding $2 million for the State Police Hate Crimes Task Force, instating automatic manual recounts for close elections and legalizing the adult use of cannabis.

“We know all the states around us are passing legislation,” Reardon said. “We don’t want to be an island so we can’t control what goes on in and around the state. We have to be able to control it, make sure it’s done equitably and fairly and make sure it’s adult use only.”

Cuomo formed a Medicaid Redesign Team, or MRT II, to identify cost-saving measures to provide $2.5 billion in gap-closing savings in 2021 and ensure Medicaid spending for the future, according to the governor’s website.

“We have to get this done,” Reardon said. “We must address the way local governments administer Medicaid and ensure they have a financial incentive.”

The budget proposal also includes an $826 million increase for school aid, a 3% increase, and ensures the vast majority of that funding — 85% — goes to high-need schools and districts.

The state’s higher education operating aid is slated to increase $257 million, or 3.4%, and raising the income eligibility for the Excelsior Scholarship to $150,000.

Kate Lisa covers the New York State Legislature for Johnson Newspaper Corp. Email her at klisa@columbiagreenemedia.com, or find her on Twitter @KaitlynnLisa

As stated in the article. The Thruway/Bridge Authority merger will destroy every region of the Hudson Valley. Tolls will be $5 as the governor has wanted for years. Bridges will fall to the wayside for projects towards NYC. Elderly, students, nurses, teachers, and the daily commuters will be faced with tough decisions. Should they cross or find somewhere else. This will deplete small businesses quickly. This is an election year and this topic will not be forgotten in November. Letters and concerns are great. But we will judge by the outcome. Not by trying.