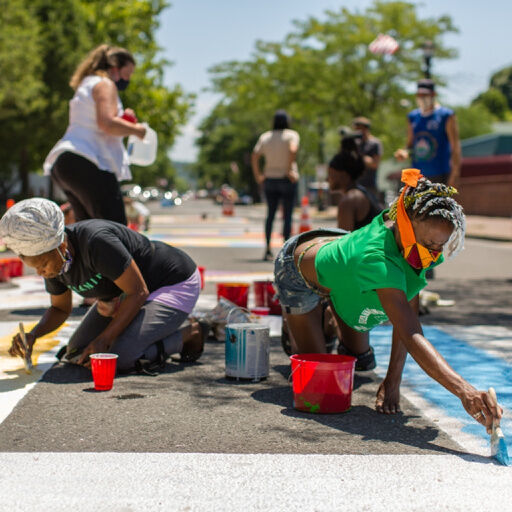 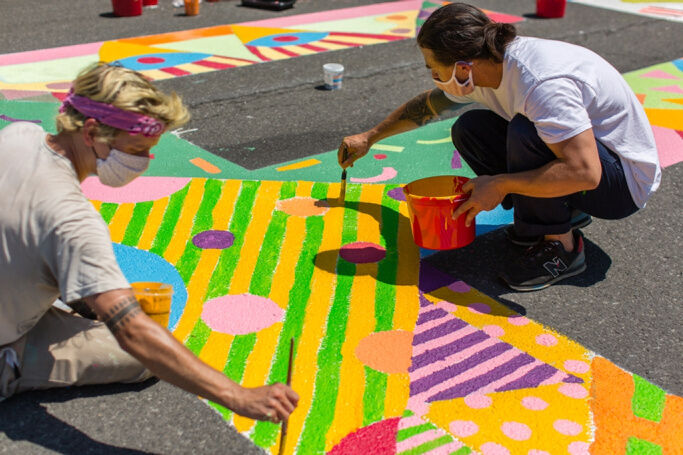 The mural’s organizers put the word out “neighbor to neighbor” to encourage community participation in the mural. Molly Stinchfield/Hudson-Catskill Housing Coalition 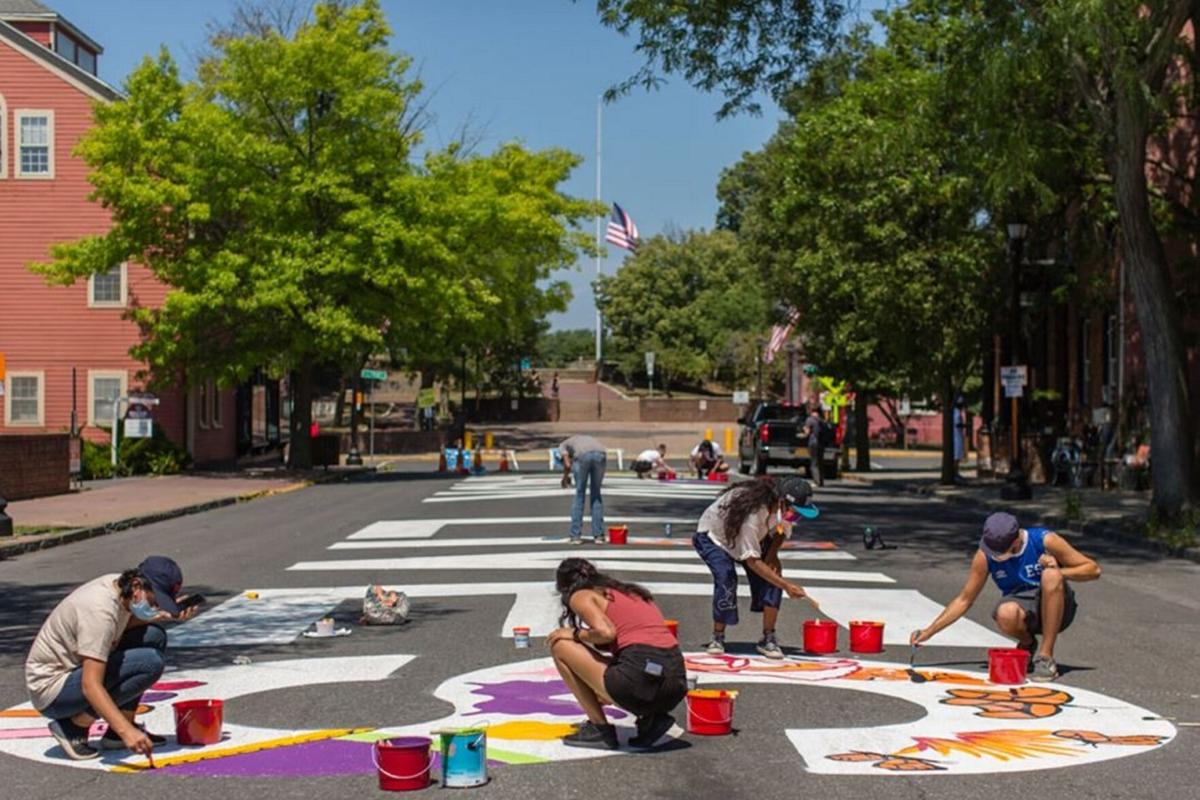 Hudson’s Black Lives Matter mural is sets to be completed Sunday, with an inauguration planned for August.Molly Stinchfield/Hudson-Catskill Housing Coalition 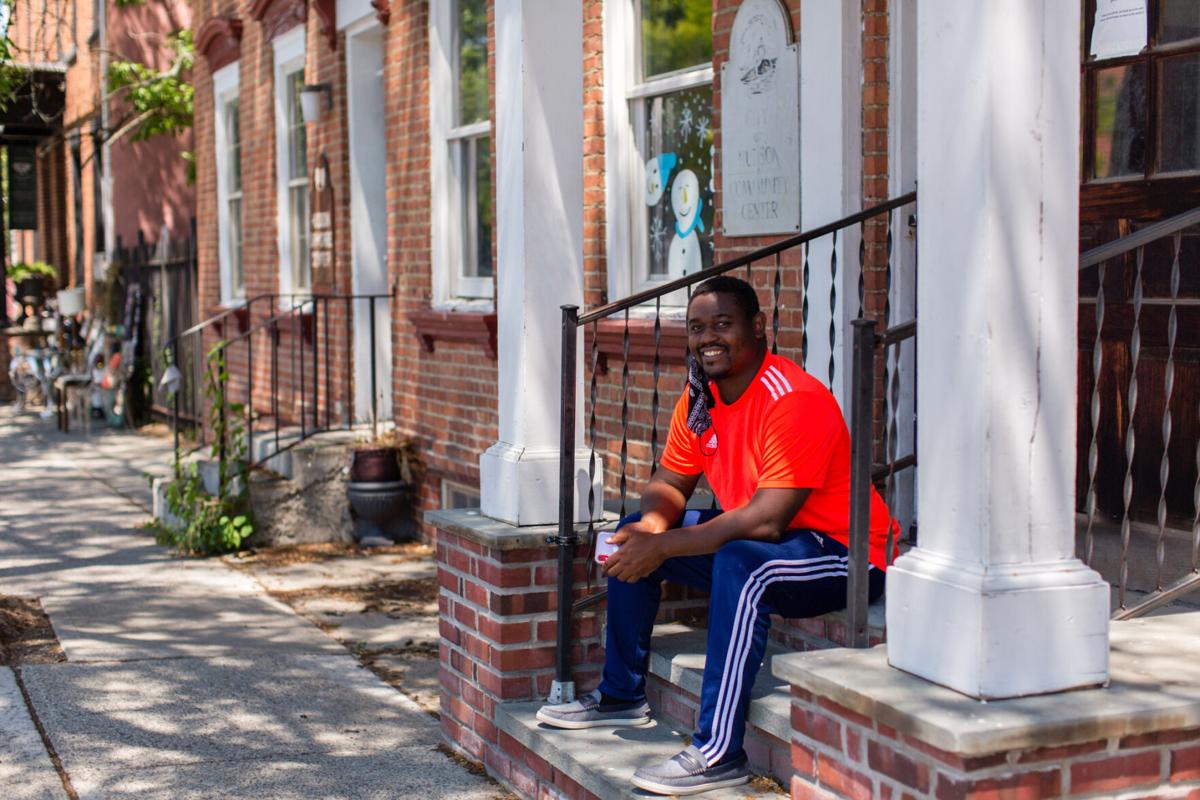 The mural’s organizers put the word out “neighbor to neighbor” to encourage community participation in the mural. Molly Stinchfield/Hudson-Catskill Housing Coalition

Hudson’s Black Lives Matter mural is sets to be completed Sunday, with an inauguration planned for August.Molly Stinchfield/Hudson-Catskill Housing Coalition

HUDSON — Quintin Cross grew up watching his city change, but one thing has remained constant.

“Warren Street has always been the divide separating rich and poor,” Cross said.

So when Cross proposed a Black Lives Matter mural to Mayor Kamal Johnson, Warren Street was the obvious location.

“We wanted to make a statement,” Cross said. “This is about bridging the gap of social distance, the separation between our side of town and the other side of town.”

The Warren Street mural will be completed Sunday, with its final three letters set to be painted by local artists. An inauguration is planned for August.

Cross approached the mayor after first consulting with Tandra LaGrone of In Our Own Voices, the organization that spearheaded Albany’s mural.

After getting the green light from Johnson, Cross and members of the Hudson-Catskill Housing Coalition, the organization he cofounded earlier this year, set to work building community support for the project.

The idea was quickly taken up by local artists Chris Freeman and Baju Wijono and Tourism Board member Chris McManus, who stepped up to offer logistical support at the mayor’s invitation.

Just one month after first proposing the mural to Johnson, Cross stood on Warren Street watching Freeman, Wijono and McManus slap chalk lines onto the pavement to map out the street-sized letters spelling out “Black Lives Matter” between Front and 1st Streets.

The group decided to create the mural, rather than hire professional painters to the tune of $20,000, as cities such as Albany and Schenectady have done. Cross estimates that the Hudson-Catskill Housing Coalition spent about $5,000 on painting materials.

“That is the beauty of Hudson, there are always folks volunteering,” Cross said.

The mural was communal effort, a reflection of the city’s ingenuity and artistic spirit, its creators said.

The mayor, who has watched the group’s progress from afar, said Hudson’s mural is unique, as much out of choice as financial necessity.

“The idea was to make it different from all the other cities,” Johnson said.

Freeman, Wijono and McManus first marked outlines of the letters in chalk, which they then traced in white spray paint with a line striping tool.

The group then rolled a layer of white paint inside the outlines to create a canvas for local artists to fill in. The group made an effort to seek out to artists whose work wouldn’t otherwise be seen by a large audience.

“We wanted to highlight folks who don’t have a shop or a studio, bridging the gap and giving people the opportunity to come together,” Cross said.

Cross put the word out “neighbor to neighbor” and before long, each letter was assigned to a different painter. Last weekend, the street was filled with artists painting their assigned letters with vibrant designs.

The mural’s location is an important feature of its message, Cross said.

Tourists leaving the Amtrak station will be welcomed by the words “Black Lives Matter,” letting visitors know that the city is a place that affirms Black lives, he said.

“In Hudson, we are acknowledging that Black lives matter and creating space for those conversations, those dialogues,” Cross said.

The city’s support stands in contrast to its neighbor across the river. The Catskill Village Board rejected the Hudson-Catskill Housing Coalition’s proposal to create a similar mural, a move that Cross said reflects the sad reality that the Black Lives Matter movement is still viewed by some as controversial.

The mural’s location in front of the Shiloh Baptist Church also holds special meaning for Cross, whose great-grandmother, grandparents and mother all attended services at the church.

Shiloh Baptist’s pastor, Rev. Alan E. Williams, said the mural is coming along nicely with participation from his congregation.

“I think it’s important to have a mural in the city of Hudson to bring attention to this international BLM movement,” Williams said. “As I view the movement, it causes the nation to address the social and racial injustices that exist in our nation and work towards developing policy and procedures that will bring about justice, equality, equity and opportunity for all the nation’s citizens.”

As much as the mural reflects Hudson’s unique DNA, it also seeks to be part of the national conversation about racial justice, its creators said.

“This moment makes Hudson part of a bigger community, part of a web of concern connected to other citizens in other towns, said Freeman, a Hudson-based artist.

The mural is also connected to an earlier fight for justice through Wijono, who painted graffiti on the Berlin Wall as part of an anarchist movement to protest that city’s division.

Wijono moved to New York City soon after the Berlin Wall came down and moved on to other art forms. Painting Hudson’s mural marks his return to street art.

Wijono recalled his youth spray-painting graffiti, always on the lookout for cops, and said this time is “completely different.”

“The community is on my side, it’s out in the open,” he said.

Cross agreed that the project has brought the city’s many factions together, something he hopes will continue even after the mural is complete.

“Art brings people together,” he said.

Black Lives don't seem to mater in Catskill. They only think of a giant unneeded and very expensive jail. Sad, and stupid.