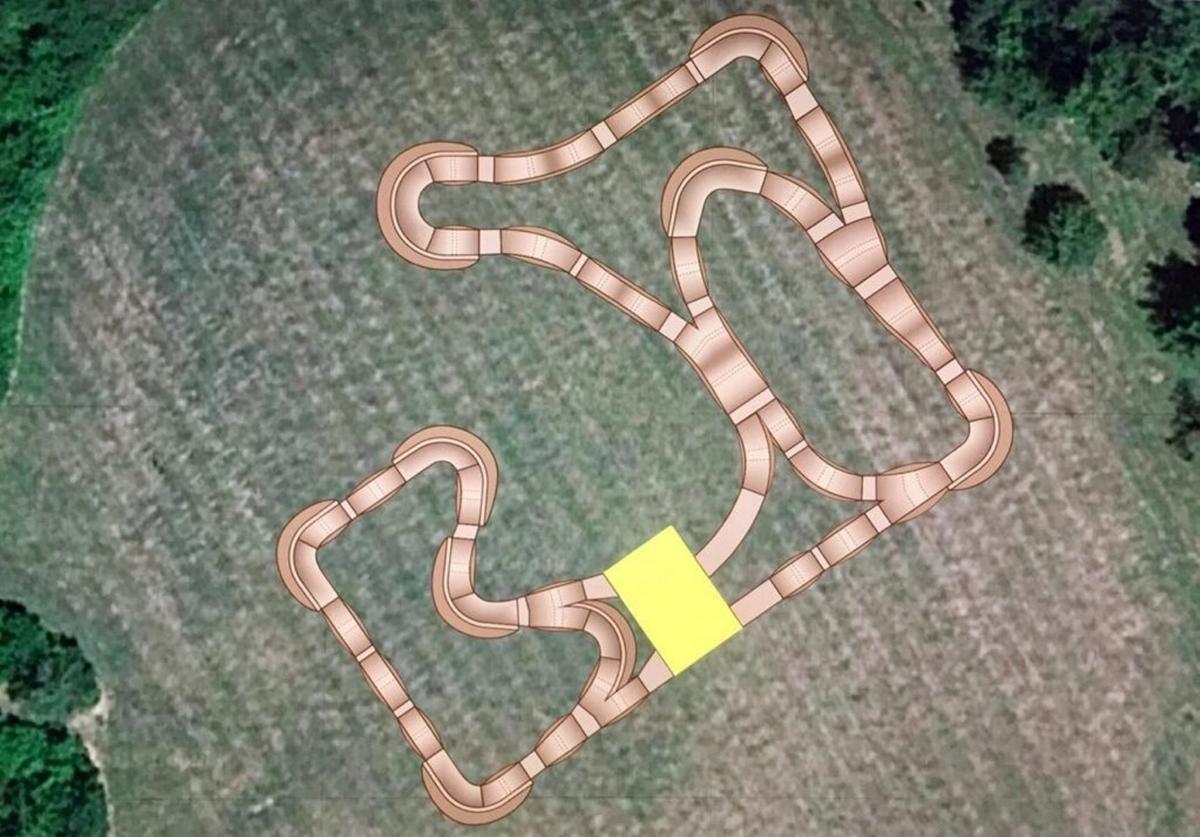 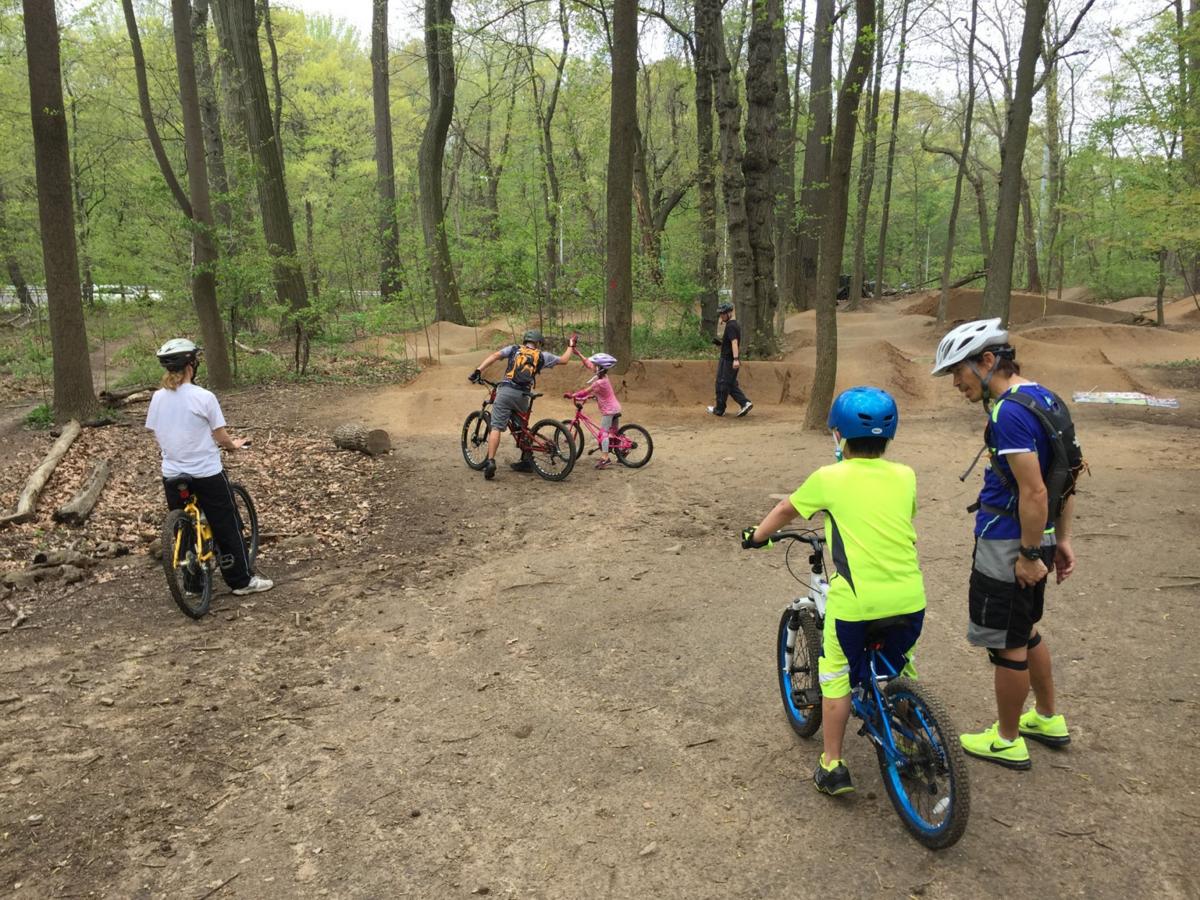 A bike skills park is planned for Greenport in 2020, and is expected to draw visitors from near and far. Contributed photo

A bike skills park is planned for Greenport in 2020, and is expected to draw visitors from near and far. Contributed photo

GREENPORT — Children and adults from both sides of the Hudson River can soon enjoy a new off-road cycling park closer to home thanks to volunteers and bicycling enthusiasts working to make it happen.

Volunteers are raising money to build a pump track and bike skills park behind Greenport Town Park, 413 Joslen Blvd. A pump track is a continuous loop of dirt with mounds that cyclists of all ages ride. The rider uses their upper and lower body to navigate the turns and mounds as they move around the track.

“A pump track might look like a pile of shaped dirt to nonriders, but this pile of dirt can pay huge dividends to the community in improvements for the lives of our young (and old) residents,” said Zach Feuer, who is a volunteer for the Columbia County Mountain Bike Alliance, the nonprofit group of cycling enthusiasts overseeing the project.

“The positive attributes that come from kids biking are inspiring to see,” Feuer added. “Kids who bike have improved fitness, coordination, confidence, camaraderie, appreciation for nature, and some pick up basic mechanical skills.”

Pump tracks can be ridden by cyclists of all ages and skill levels, said Stefan Friedemann, the main contact for the project and a member of the Columbia County Mountain Bike Alliance. Friedemann plans to use the park with his two sons, who are 11 and 15 years old. “Now that we have the track designs, we will begin fundraising for Phase 1 — a high quality pump track planned to be built at the end of 2019, beginning of 2020, to serve locals and as a cycling destination for riders of all ages and skills,” Friedemann said.

The park was designed in July by Jim Martinez, who has designed a number of pump tracks around the state. His most notable track is at Cunningham Bike Park in Queens.

“I live in Hudson near the firefighter’s home [FASNY Fireman’s Home] and have two kids who ride bikes,” said Erica Nance. “They pedal around the neighborhood and at the skate park, but are limited by asphalt and road traffic. Being able to ride at a park, away from the traffic, would be so welcome.”

Other parents and adult cyclists from Columbia and Greene counties have commented on their excitement for the park on its social media webpage.

Feuer has been doing weekly mountain bike rides for five years with kids in pre-kindergarten through sixth grade. Feuer and other volunteers currently have to drive close to an hour to North Bethlehem Park in Albany for the kids’ rides. Meanwhile, the nearest pump tracks are located in Queens, New York; Port Jervis, New York; and Bennington, Vermont – all too far for most Hudson residents to travel, Feuer said.

The bike park in Greenport will remove the huge transportation barrier that keeps a lot of kids from mountain biking, Feuer said.

“Pump tracks don’t have hills — which can be discouraging — are extremely fun and can be used by kids of all ages and force you to learn proper form while working out your whole body (not just your legs) — even kids on balance/strider bikes who are too young to use pedals can use a pump track,” Feuer said. “If built, this will be the only pump track in the Hudson Valley and will be a draw for riders.”

The town of Greenport this year offered organizers of the project about an acre of land behind the park for the construction of the outdoor dirt track. The land, which is mowed by the town, is unused. It sits behind the park and borders the Greenport Conservation Area, 319 Joslen Boulevard. The town has expressed interest in having volunteers cut trails into the area surrounding and behind the existing park, as part of an expansion, or phase two, of the project, Friedemann said. But as of now, volunteers are focused on the pump track as the main attraction, Friedemann said.

“The Greenport Park has an incredible location but not a ton to do aside from soccer and baseball,” Nance said. “Wouldn’t it be great if kids could ride bikes there? They could learn safe handling, balance, coordination, how to ride over uneven terrain, etc., and the parents would have a place to watch and socialize. Families with mixed-age kids could have young ones on the playground and older ones at the bike park. And there’d be something to do for siblings of kids who are there playing soccer and baseball.

“It’s very exciting that the Greenport Town Park has made space for this project, and the park has been designed. Now we just need contributions to get this thing built,” Nance added.

Volunteers need to raise up to $14,000 in cash and/or materials in order to see the project to fruition, Freidemann said. Volunteers have raised almost $5,000 so far, with several businesses donating materials, including Herrington Inc., A. Colarusso and Son, and Bank of Greene County. Coon’s Contracting has also offered help with equipment to move material, specifically dirt and clay.

Organizers are looking for material donations and labor to help lower the cost of construction, including clay and soil. Additionally, volunteers are looking for tarps, chain-link fencing, lumber, seating (benches), signage, trees and landscaping plants — for aesthetics, water absorption and shade — large rocks and small boulders for fun biking features, trucks for transporting items, and a water tank for maintenance (or underground water piping for a direct water source).

Tax-deductible donations to the construction of the park can be made to the Columbia County Mountain Bike Alliance online via the organization’s PayPal link on its Facebook page. Checks can be made out to Columbia County Mountain Bike Alliance, with “Bike Park” written in the memo portion, and mailed to: Attn: Stefan Friedemann, 3 Janis St., Hudson, NY, 12534.

Our family is grateful for the creation of this bike skills park! Our son, who is 10 and has been mountain biking for the past 3 years, comes home feeling exhilarated and balanced after he rides. I’m sure he will spend many hours at the park while he enjoys the company of his friends and friends to be.

This is a fantastic project! My kids and I are avid mountain bikers and will be supporting this project and spending countless hours riding there! Getting kids outdoors is of paramount importance in today’s day and age. And in fact, mountain bikers like all outdoor enthusiasts promote and support the preservation of our natural resources and forests! Good work!!

Wow, this is cool. I see a lot of families biking in the woods in Dutchess and Green counties, and up in Austerlitz, but there's not so much here in Hudson. And there's not a pump track like this for miles. It's going to bring in families from all over the region.

This is so cool. Me and my sons are real happy to see this happening. We have a house just over the Hudson....and we live down state. We will def be making trips up just to enjoy this. We need more stuff like this to keep our kids occupied in the outdoors. Thanks to all those working so hard on this.

I think this is a great thing for the community and much needed to grow cycling, as a kid everyone was on bikes, with the growth of technology (video games, smart phones) I have watched the kids coming up lose interest, we need to get people out there, this is going to be a great added feature to what is cultivating with Beebe hill, Elm Ridge, an Roundtop