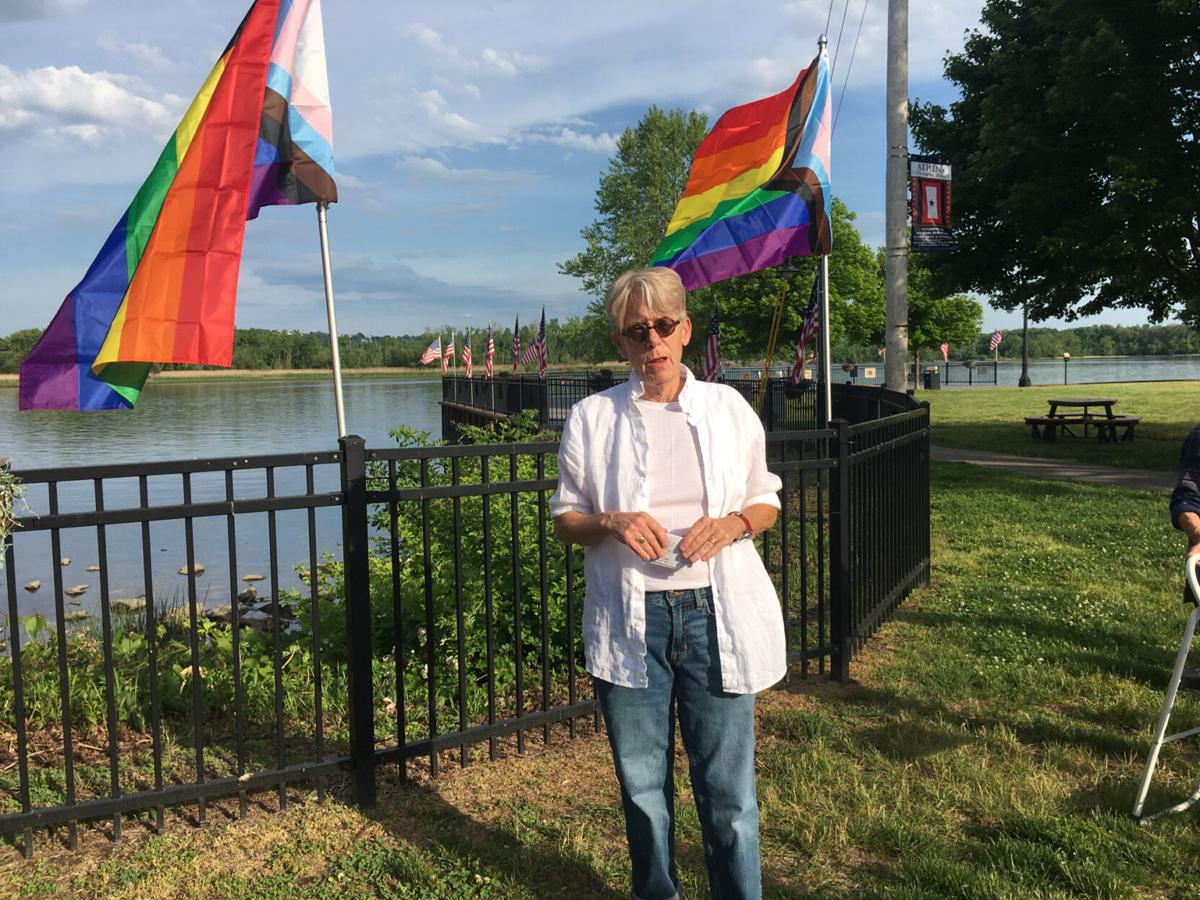 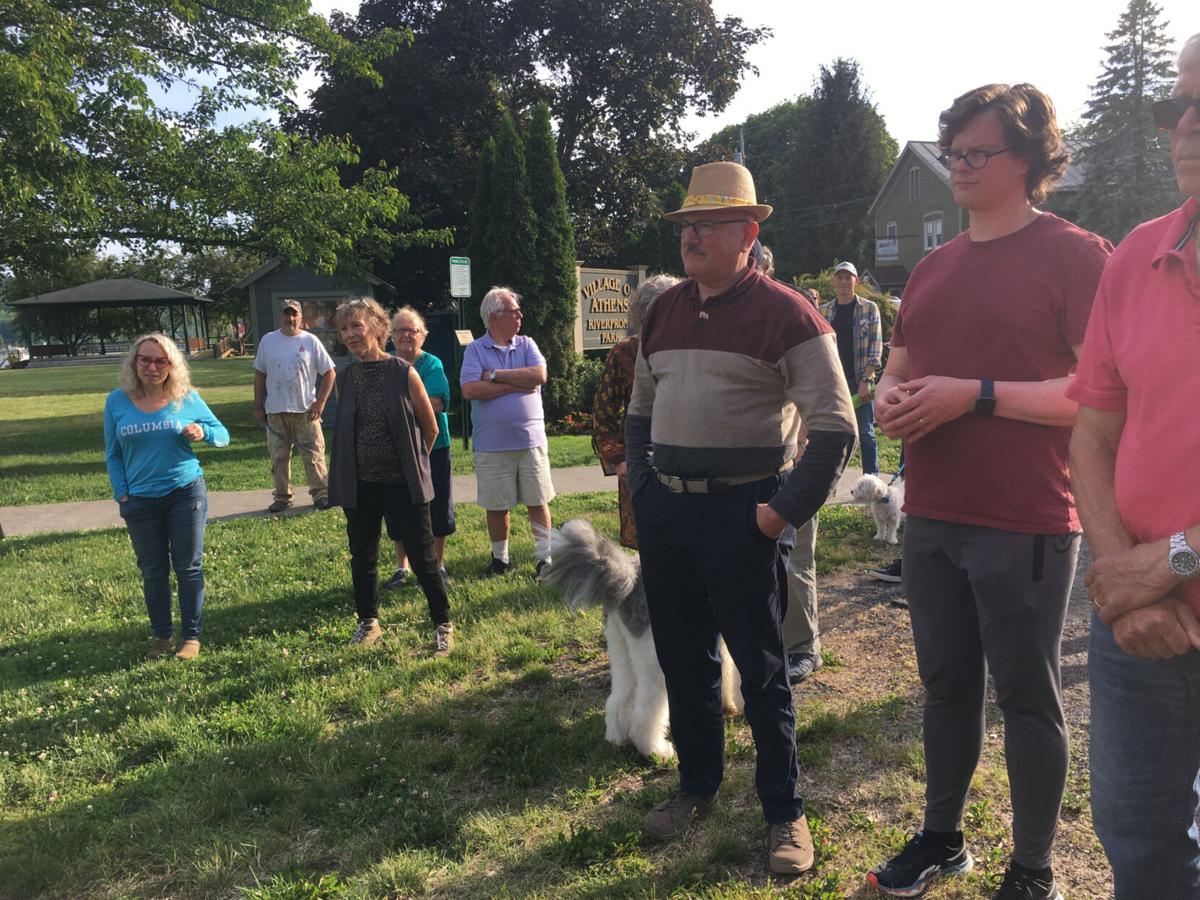 About 50 people turned out for a Pride event at Riverfront Park on Tuesday. Melanie Lekocevic/Columbia-Greene Media 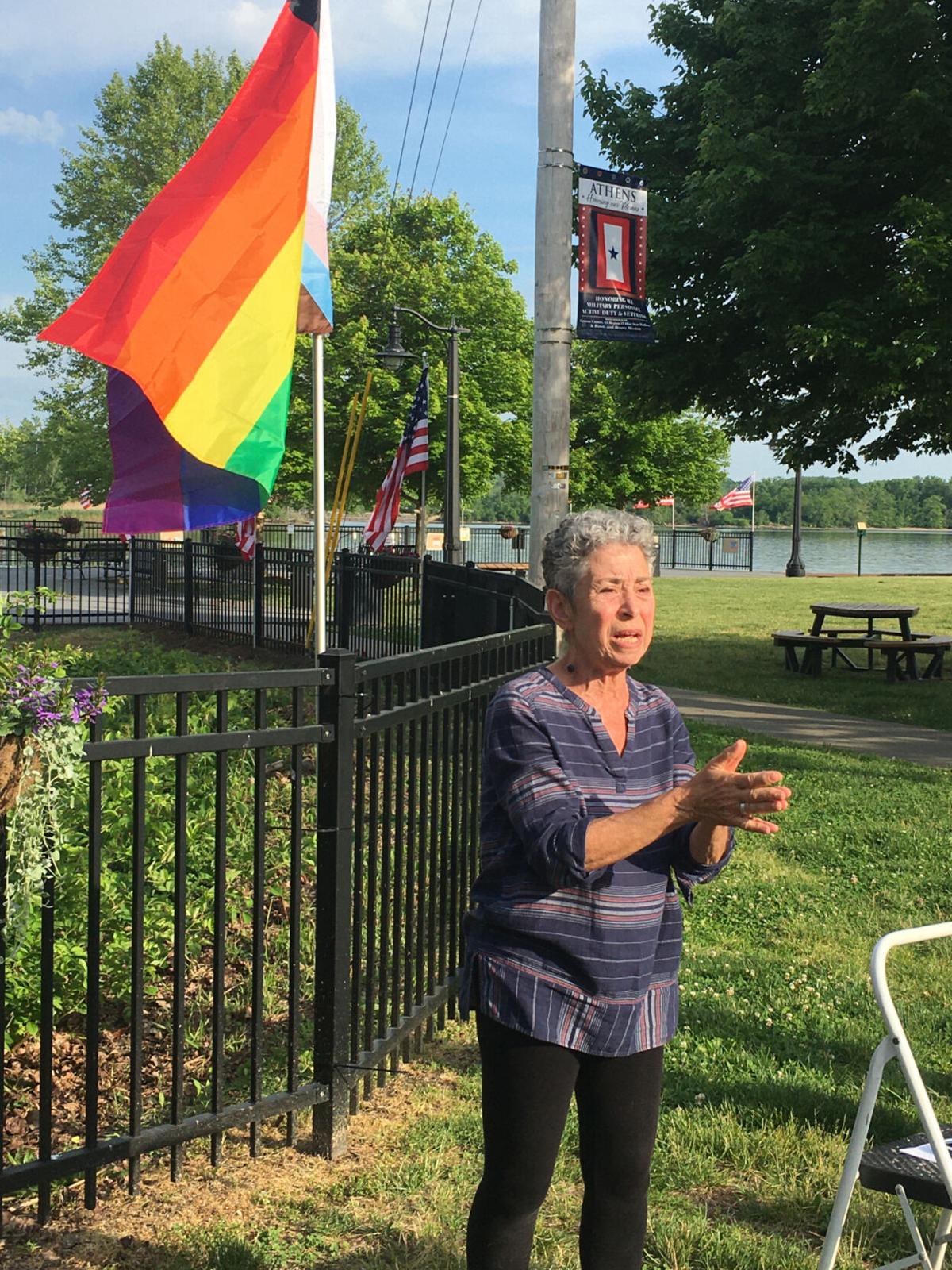 Event co-organizer Marya Warshaw stands beneath the Progressive Pride flag as she speaks to the crowd. Melanie Lekocevic/Columbia-Greene Media 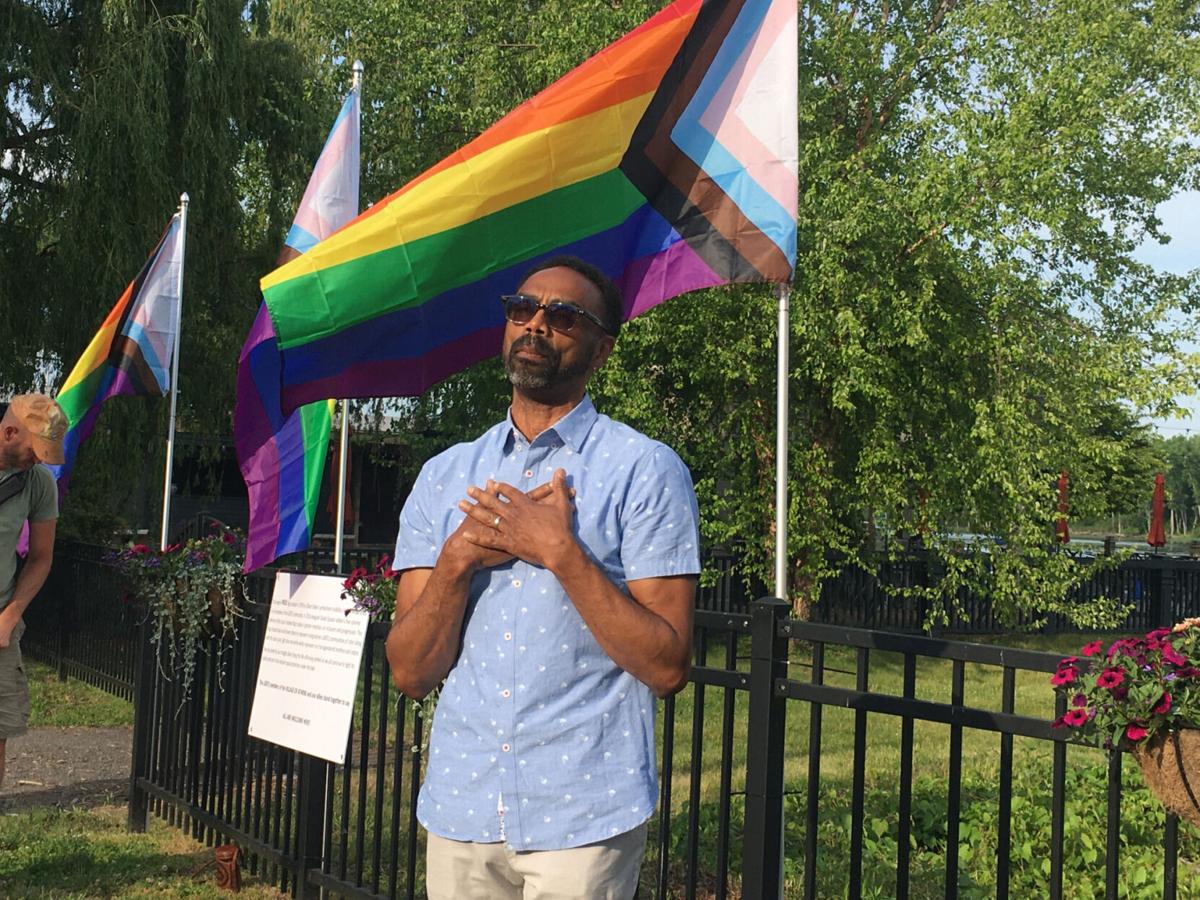 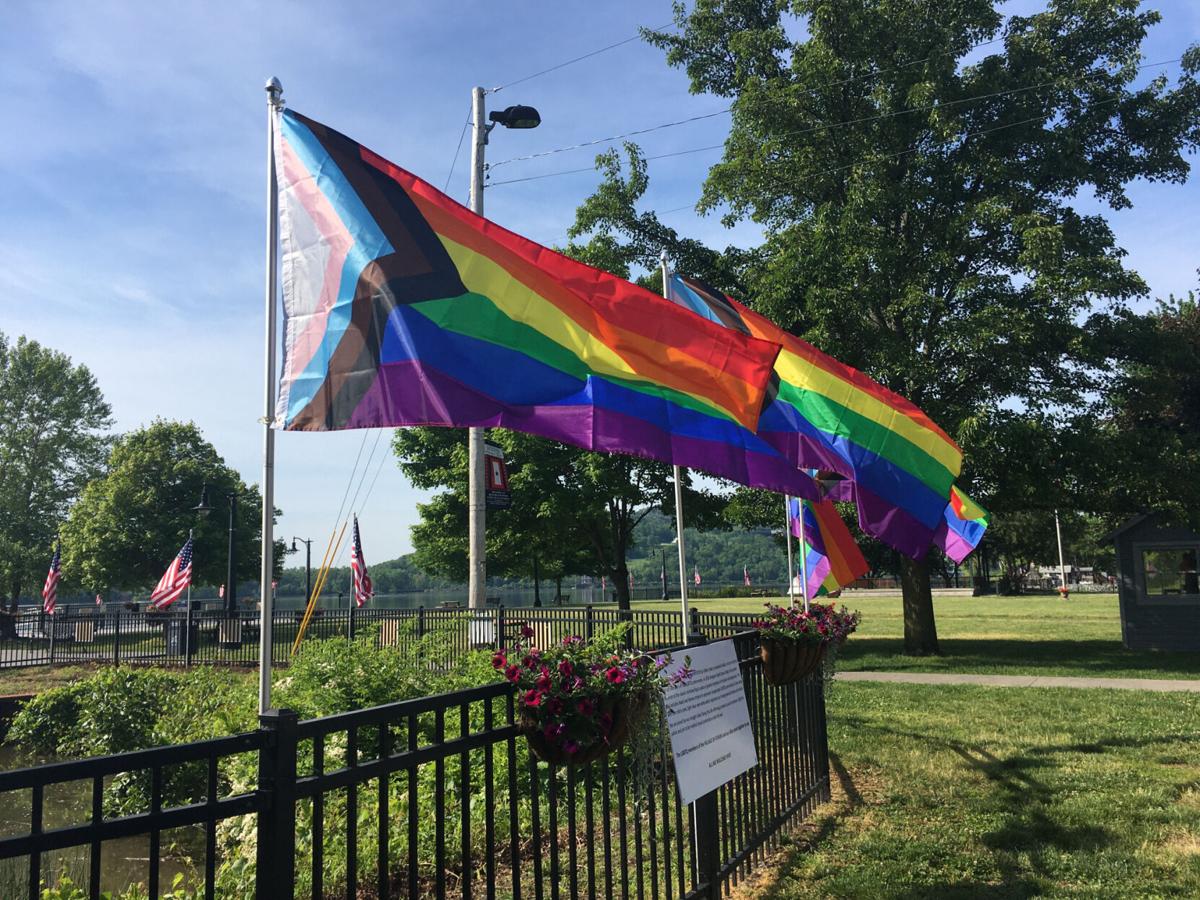 About 50 people turned out for a Pride event at Riverfront Park on Tuesday. Melanie Lekocevic/Columbia-Greene Media

Event co-organizer Marya Warshaw stands beneath the Progressive Pride flag as she speaks to the crowd. Melanie Lekocevic/Columbia-Greene Media

ATHENS — Four Progressive Pride flags are waving in the breeze at Riverfront Park in honor of Pride Month.

About 50 people turned out Tuesday evening for the second year to celebrate the LGBTQ community, an event organized by residents Jane-Cole Raftery and Marya Warshaw.

“We moved here a number of years ago and our motivation up here has been a blessing. I have been doing this stuff since 1969 and we have made progress, but we have a lot farther to go,” Raftery said. “That is why visibility here is so important.”

Raftery and Warshaw first put up a Rainbow Pride flag several years ago at their first Athens home and said the response was very positive among those in the LGBTQ community.

“Kids and adults who did not feel safe stopped us and told us that just seeing that flag gave them a feeling of belonging and safety,” Raftery said. “That was everything.”

Offering a sense of inclusion was the motivation behind Raftery and Warshaw’s decision to distribute a variety of Pride flags to all comers. Suggested donations of $20 will go to the D.R. Evarts Library, but flags are available to anyone who wants one, regardless of their ability to make a donation. So far, about $500 has been raised for the library, Warshaw said.

The library has displayed books this month focusing on LGBTQ issues, Raftery said.

“That is a really big, visible, bold thing to do here,” she added.

The one flag the group ran out of and has not yet been replenished is the Straight Ally flag, which is flown by heterosexual people who want to show support for their LGBTQ brethren.

“We had no idea it would be so popular,” Warshaw said. “It was extraordinary.”

Raftery and Warshaw were granted a permit from the village to post the flags in the park. Progressive Pride flags differ from traditional rainbow flags, which were created in 1978 by Gilbert Baker, according to a sign posted at the park. In 2018, designer Daniel Quasar added a chevron with five additional colors.

“This flag includes black and brown stripes to represent marginalized LGBTQ communities of color along with the colors pink, light blue and white, which represent our transgendered brothers and sisters,” according to the sign.

The purpose of the flag is to promote inclusion for all, Warshaw said.

“This is a flag that has never been about excluding anyone and it is extremely inclusive,” Warshaw said. “It is not about hate, it is not about who doesn’t belong. It’s about that all of us belong.”

Local dance teacher Marcus McGregor was among those in the audience who shared their experiences.

“Theater is where I found my refuge and a lot of gay and trans kids find their refuge in theater,” McGregor said. “I talk to these kids all the time because they can’t go home and talk to their parents.”

“If you can fly a flag outside your house so these kids will know they have allies in the community, that is a great way to show it,” McGregor added. “They don’t have anyone they can talk to. Get a flag if you can.”

Resident Guy Griggs said he was proud of the progress the village has made with regard to inclusion.

“It has been incredible to see a community really move the needle when it comes to diversity and inclusion,” Griggs said.

Eric Delage, the former owner of Winkle’s Bakery, said his business was among the first to fly a rainbow flag in Catskill.