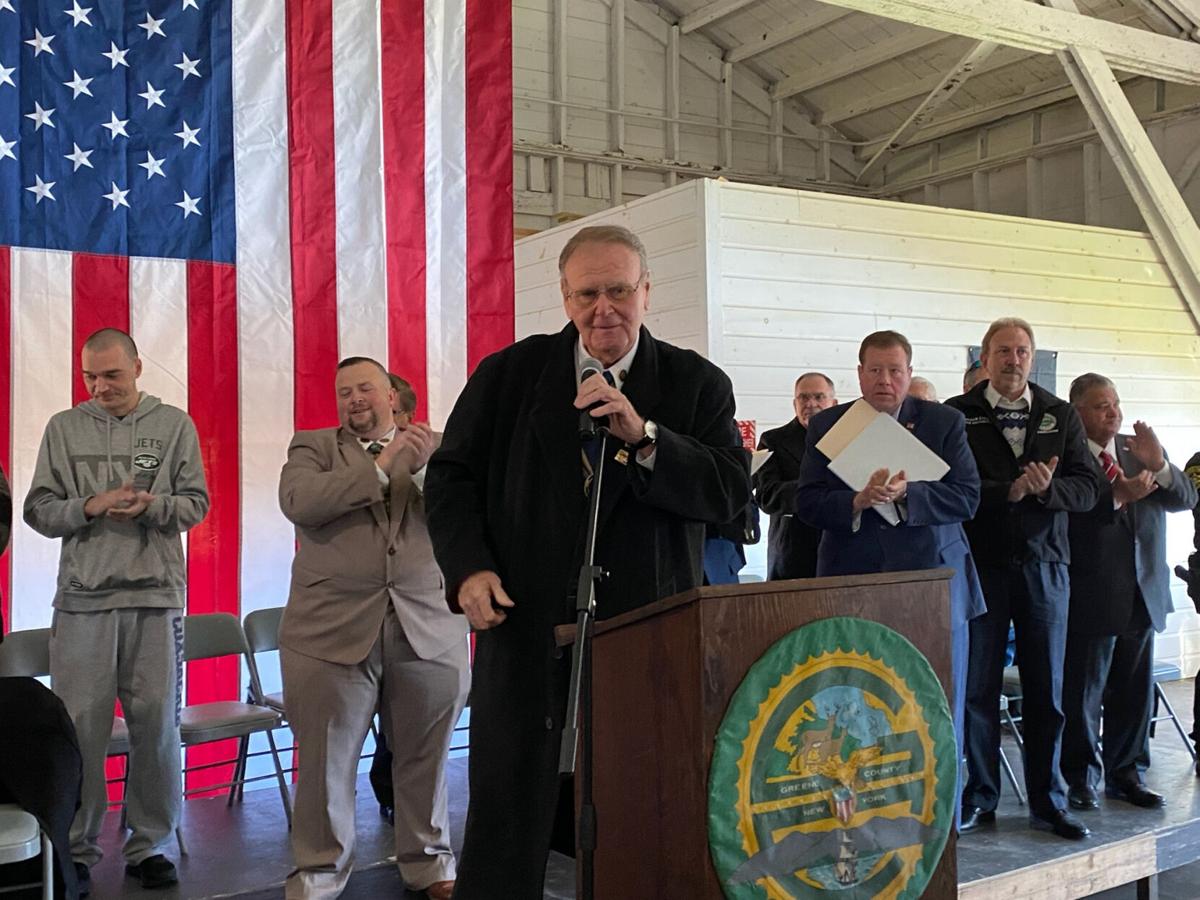 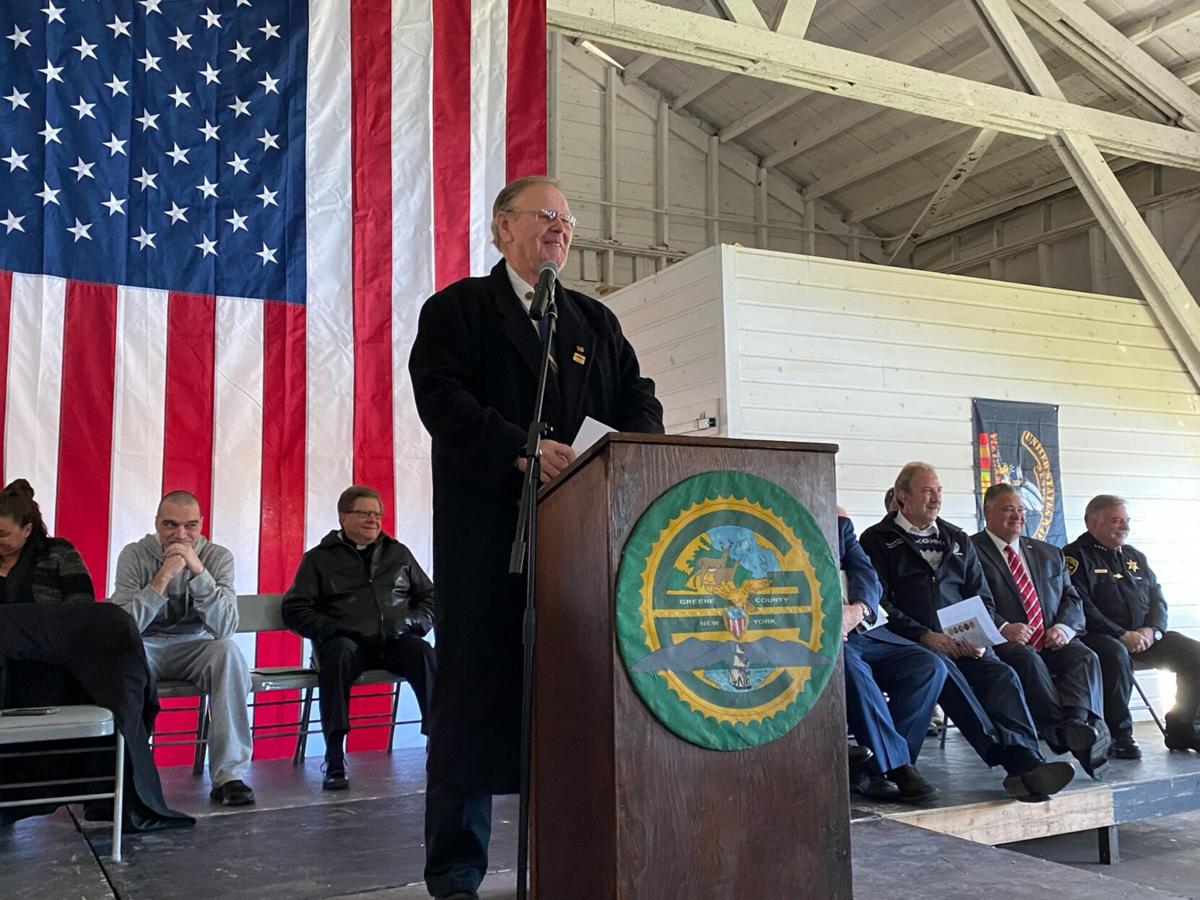 CATSKILL — After serving his country and community for six decades without acclaim, U.S. Navy Equipment Operator 2nd Class Thomas Andreassen was honored as the Greene County Veteran of the Year at a ceremony Saturday at the Historic Catskill Point.

The Leeds resident got his day in the sun as local veterans and elected officials gathered on the waterfront to salute him.

The ceremony was not held in 2020 due to COVID-19, and the community made up for lost time this year as a large crowd gathered to honor Andreassen.

After a procession of speakers, the man of the hour took the stage.

“I think it was easier going through Vietnam than it was being here today,” the humble Andreassen said to laughs from the crowd.

The 45-year Greene County resident enlisted in the Navy in 1965 and subsequently served two tours of duty in the Da Nang Province during the Vietnam War as part of the Seabees unit. After Vietnam, Andreassen served a four-month tour of duty in Antarctica.

“If no one can see any amusement in those two assignments, you’re dead,” he said.

Markou quoted from “The Road Not Taken” by poet Robert Frost as he paid tribute to Andreassen.

“Two woods diverged in a yellow wood, and sorry I could not travel both, I stood and looked down one as far as I could,” he quoted. “Thomas Andreassen took the road less traveled. The road that led along the path of remembrance and service. It was as if he was chosen to be the one who remembers.”

During the course of his military career, Andreassen was decorated for his service on several occasions, including the Vietnam Service Medal with Fleet Marine Force Combat Operations Insignia and he also received a pair of Bronze Stars.

In 1969, Andreassen was honorably discharged from his military service, but when he settled in Greene County in 1976 he began serving the region’s veterans by joining every veterans’ organization he could find and assisting with military funerals.

Greene County Veterans Service Director Michelle Romalin Deyo presented Andreassen with an engraved flag case and told the crowd that whenever she needs assistance with any veteran, Andreassen is her first call and he never turns down a request.

Andreassen’s wife Joy submitted the application for the award without his knowledge, which caught Andreassen off guard when he was told he had been selected to receive the annual honor.

“It was a shock,” he said after the ceremony. “I enjoy helping doing the military funerals, I like helping the vets. I want to see patriotism really expand in this country. Patriotism is dwindling, as far as I’m concerned. I don’t think the kids are being taught patriotism in schools. Thankfully in Greene County they are. But there are a whole lot of schools that are anti-American. I’d like to see that change. I can’t change it but somebody younger could.”

Andreassen was born in Brooklyn in 1945 and moved to Saugerties as a child, before moving to Leeds 50 years ago. He said Saturday he was accepting the Veteran of the Year honor on behalf of all his peers.

Andreassen noted that the county honors two veterans each year, a deceased veteran in May for Memorial Day and a living veteran in November to mark Veterans Day.

“I’m lucky I’m being honored in November,” Andreassen said to laughs from the crowd.

Surrounded onstage by his large extended family of children, grandchildren and great grandchildren, Andreassen thanked his wife for her decades of support.

“I want to give a special shout-out to my wife Joy, who has been with me during the best and worst times,” he told the crowd. “There have been many of both, as I know many of you in the audience can relate to. She too could be behind this podium for all the vets and individuals she has supported and assisted over the years. I love her and think she’s a keeper.”

During his speech, Andreassen grew emotional as he recounted a war story his father in-law told him on his deathbed about attempting to save a fellow soldier’s life during World War II only to see the man killed by a German soldier’s bullet while Andreassen’s father was carrying him.

“Let us never forget their sacrifice,” Andreassen told the crowd.