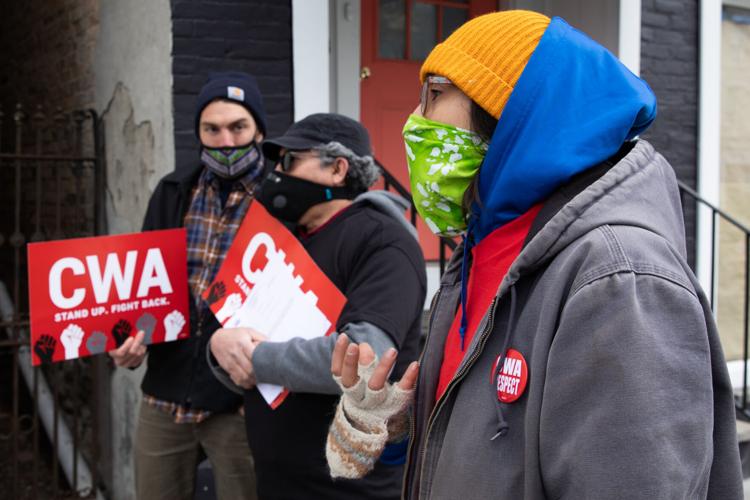 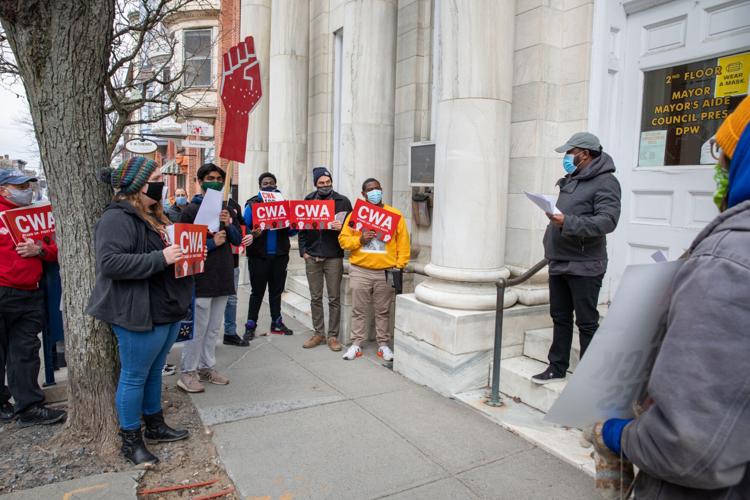 Mayor Kamal Johnson told the protesters March 16 that while he supports them, he needs to consult with the city legal team before signing his name in support of the efforts. Aliya Schneider/Columbia-Greene Media 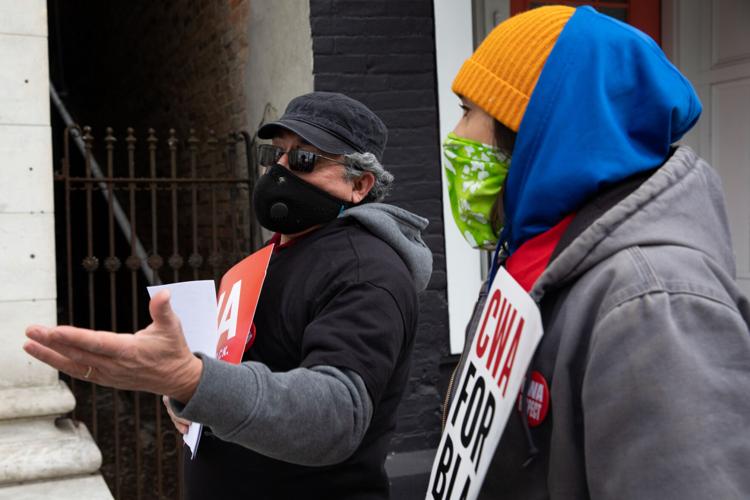 Juan Sanchez, left, who works full-time as a cleaner at the youth department, has had trouble communicating with union representatives because he does not speak English, he said in Spanish. A co-worker translated his remarks. Aliya Schneider/Columbia-Greene Media 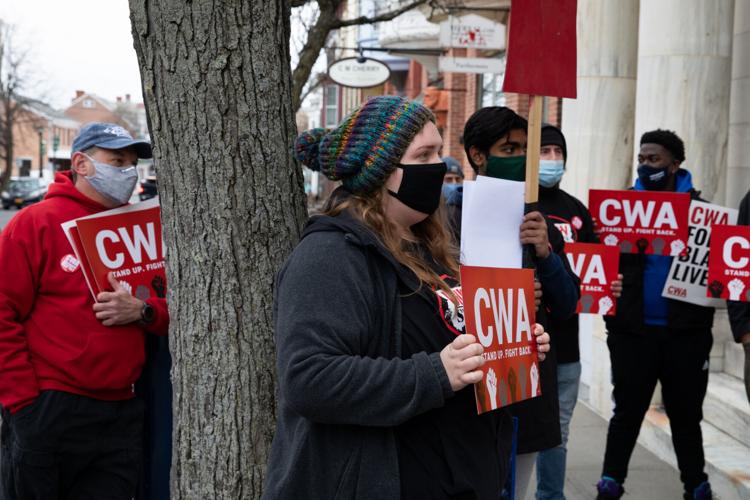 Youth department secretary Karlee Burchfield has led her co-workers in efforts to unionize with CWA, she said. Aliya Schneider/Columbia-Greene Media 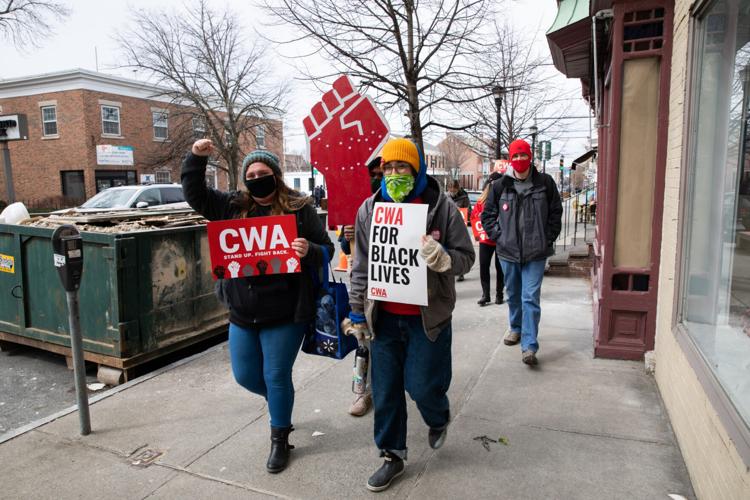 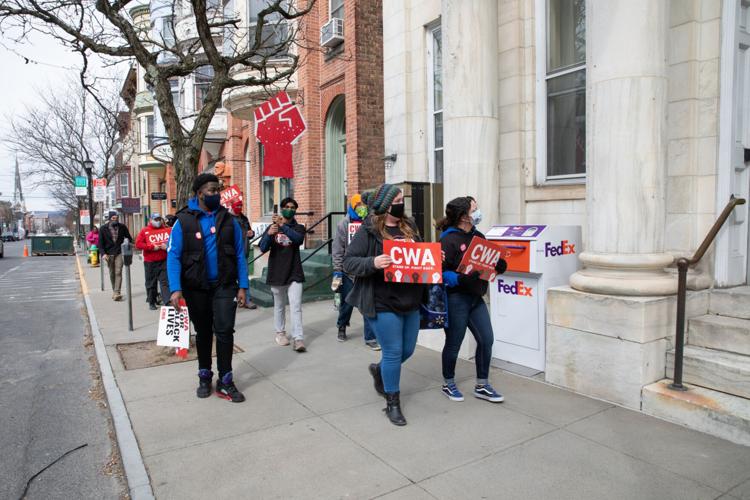 Mayor Kamal Johnson told the protesters March 16 that while he supports them, he needs to consult with the city legal team before signing his name in support of the efforts. Aliya Schneider/Columbia-Greene Media

Juan Sanchez, left, who works full-time as a cleaner at the youth department, has had trouble communicating with union representatives because he does not speak English, he said in Spanish. A co-worker translated his remarks. Aliya Schneider/Columbia-Greene Media

Youth department secretary Karlee Burchfield has led her co-workers in efforts to unionize with CWA, she said. Aliya Schneider/Columbia-Greene Media

HUDSON — Youth department employees marched to City Hall on Tuesday to ask for Mayor Kamal Johnson’s support for the workers’ efforts to unionize.

A group of 11 people marched from the youth department to City Hall, 502 Warren St., at 1 p.m., calling for the department’s unionization through the Communications Workers of America.

Over the course of the group’s discussions with the mayor, the crowd grew to 15. The group chanted in front of City Hall, briefly waiting for Johnson to meet them.

Most other city departments are part of the Civil Service Employees Association, with the exception of the police department, which is part of a law enforcement union.

Johnson, Common Council President Thomas DePietro and Youth Director Nick Zachos do not know why the youth department is not represented by CSEA.

Youth department workers are offered CSEA health insurance, but they do not receive legal representation from the union and cannot participate in the union meetings to represent the department, Youth Department secretary Karlee Burchfield said. Burchfield has led efforts by the department to unionize with CWA.

All 22 youth center employees have signed on in support of joining CWA, Burchfield said.

Burchfield asked Johnson if he would support the group when he came outside to meet them Tuesday afternoon.

Burchfield and Johnson ended up speaking over one another when Burchfield began to talk about people of color.

“We need to be protected,” Burchfield said. “We cannot continue to let this happen to our workers that are helping the impoverished and the people of color of our community.”

Burchfield responded she is not telling Johnson how to feel, and the two stepped on each other’s statements, with Johnson saying he has fought for the youth center for years.

After the rally, Burchfield said she was elected to represent her co-workers.

“I was voted in by my co-workers,” she said. “They wanted me to be their voice and that is an issue that we face. Whether or not the mayor is a person of color plays no difference into the politics of the city and we are marginalized for the people of color we serve and we employ, and it may sound crazy coming from a white person, but that is what I see happen to my co-workers every single day.”

The department largely employs and serves people of color, she said.

“There’s a history of the youth center being singled out,” Burchfield said. “People think that’s crazy because we have a person of color as the mayor, but that doesn’t change anything or how we’re perceived as a department.” She pointed out the department does not make revenue for the city, but it provides food and a safe space for community members.

“We do so much for the community and get so little back,” she said.

Johnson has always supported the department’s unionization efforts, but he has to make sure it is done legally, he said.

The CWA has not followed through with its correspondence with city labor attorney Elena DeFio Kean, Johnson said. The union was asked by the city to send documentation and clarification, and it did not, Johnson said.

CWA business agent Rob Pinto asked Johnson multiple times in front of City Hall if he would sign a voluntary recognition form supporting the union. Johnson responded each time that he would do so once union representatives speak with the city attorney.

The CWA has resisted working with the attorney because the city asking for clarification means it will try to eliminate some employees from the union’s representation, such as part-time workers, Pinto said. Pinto said he thought Johnson would sign in support without going through city lawyers.

“All the mayor has to do is wave his pen and sign a letter that says he voluntarily recognizes this group and it’s done,” Pinto said. “And the mayor continually refers to lawyers in this case.”

The union will go through the city’s legal team, but if the department does not get the protection it deserves, they will be back, Burchfield said.

Johnson said to the protesters they were led astray coming to City Hall, saying they should be protesting CSEA.

But the department is not interested in CSEA, Burchfield said.

Youth Department program coordinator Vanessa Baehr had a bad experience reaching out to the CSEA, she said at the rally.

Workers want to be protected so they can do a better job serving the city, Baehr said.

“We work to serve the community,” she said. “That service is real. But you can’t do a good job if you’re not supported, so hopefully we get some support down the road.”

Baehr has worked at the youth center for 10 years, two of which she was a full-time worker, she said. She hasn’t been part of a union and her health care is terrible, she said.

Johnson said he has been mayor for just over a year and these problems precede him. He formerly worked at the youth center.

Zachos has not been involved in the union discussions because he is a manager, he said.

Johnson was an advocate for Columbia Memorial Health workers’ union during prolonged negotiations with hospital management.

Blockchain for A Greener Future: What You Need to Know