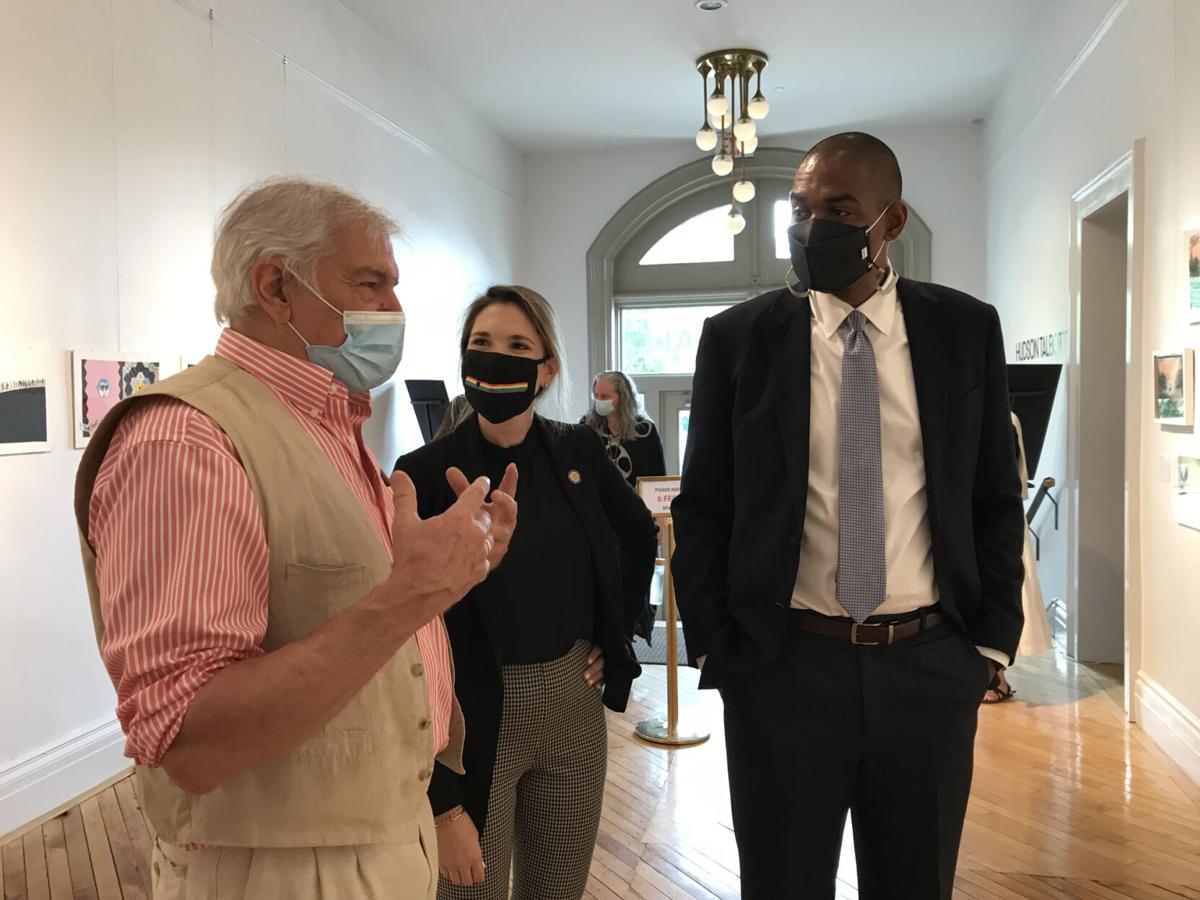 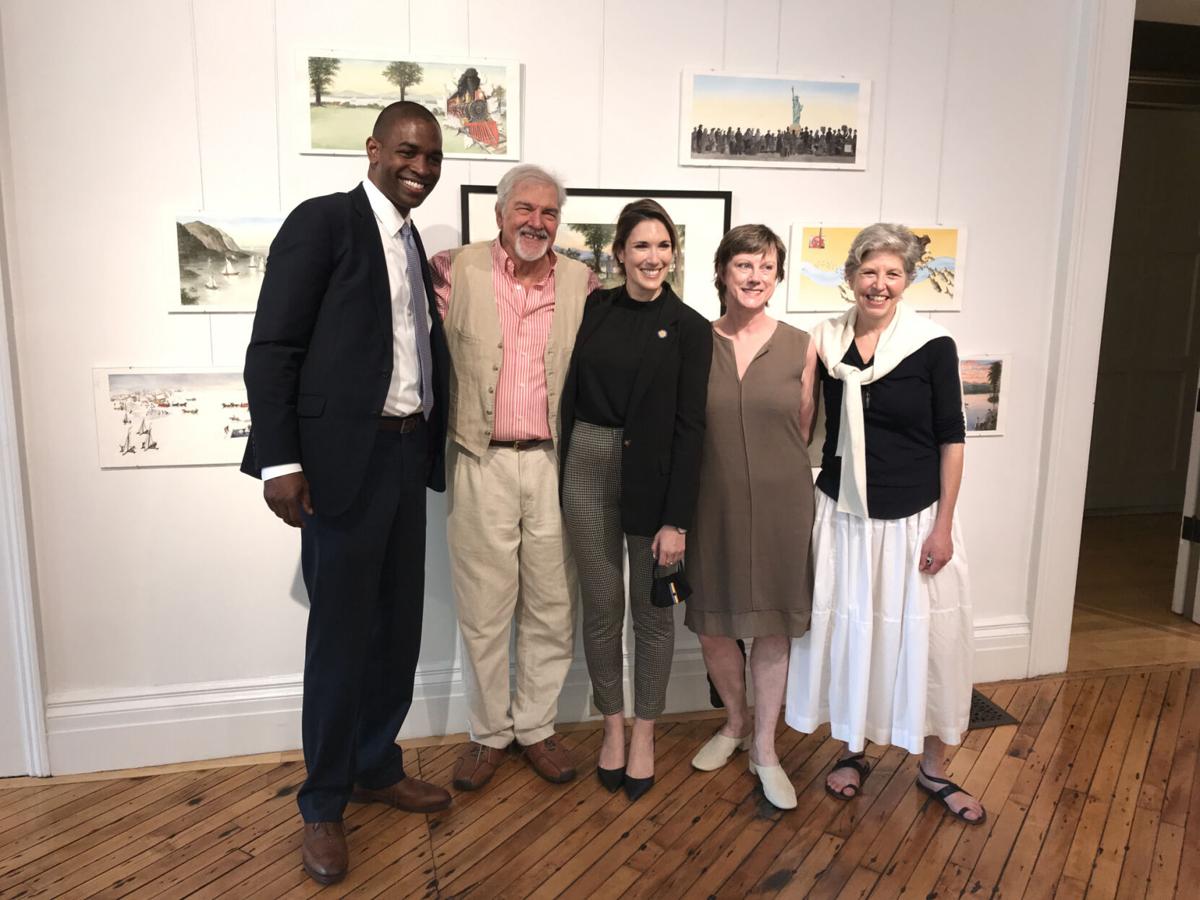 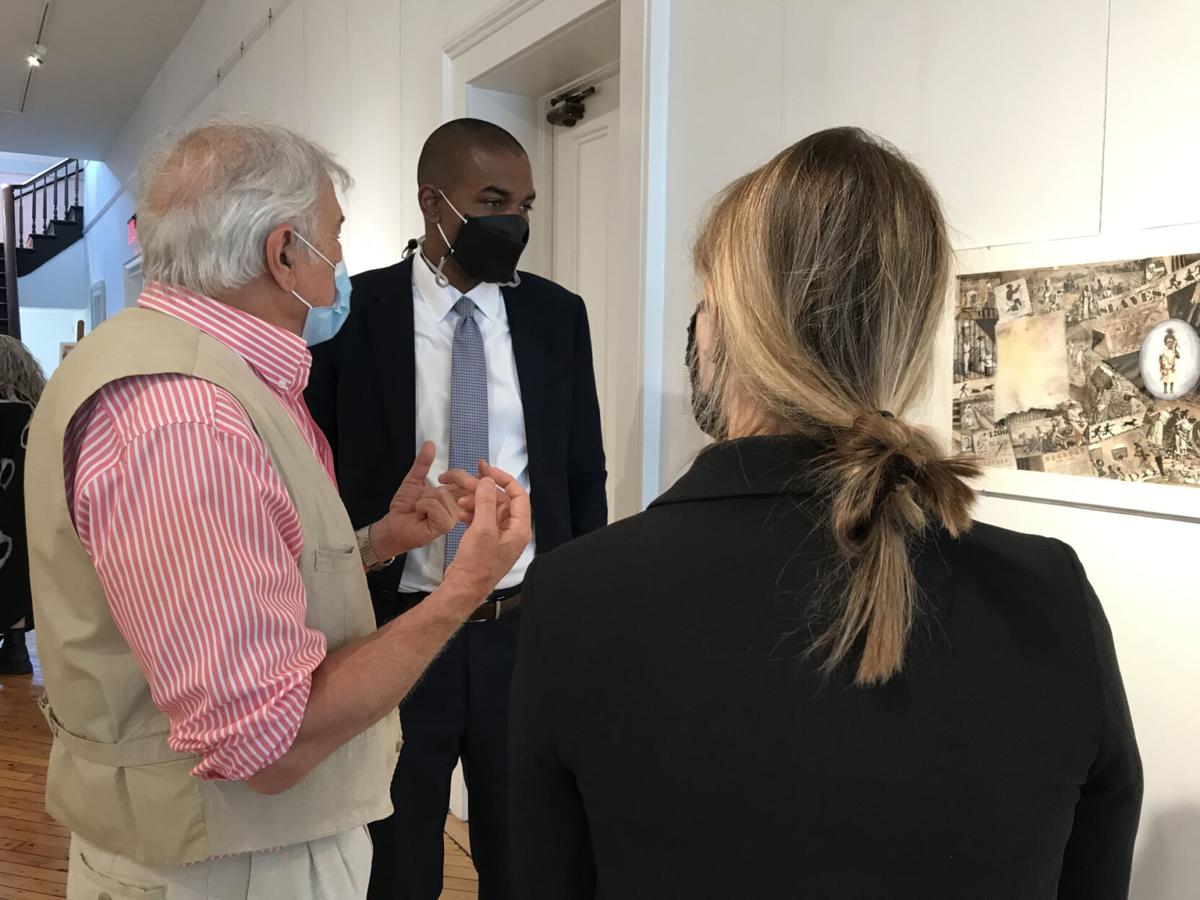 Talbott, who lives in Catskill and has a studio in an old farmhouse outside of Cairo, welcomed U.S. Rep. Antonio Delgado, D-19, and state Sen. Michelle Hinchey, D-46, to a members-only preview at Hudson Hall, the day before the exhibition opened to the public.

The free exhibition will be on display until Aug. 15, by reservation.

The exhibition is for both children and adults, with illustrations from Talbott’s books as well as from playful advertising work for clients such as Bloomingdale’s and the Statue of Liberty Centennial celebration, according to Hudson Hall.

The opening pieces are from Talbott’s 2009 book “River of Dreams: The Story of the Hudson River.” A musical inspired by the book called “River of Dreams” will be performed at Hudson Hall in 2022 by the Harmony Project Hudson, Talbott said Monday.

Talbott was planning the show at Hudson Hall before COVID-19 hit, postponing the plans. Hudson Hall encouraged Talbott to exhibit illustrations beyond his “River of Dreams” artwork, he said Monday. “They sort of encouraged me to make it retrospective and really put in as much as I wanted to,” he said. “I wasn’t initially intending to make it as comprehensive as it became.”

The exhibition has about 140 pieces from 40 years of Talbott’s career. It surveys various eras of books he has written and illustrated over the years, he said. It presents an opportunity for people to see Talbott’s original illustrations in person, rather than prints on the pages of his books.

Talbott’s best-known book is arguably “We’re Back: A Dinosaur’s Story,” which was adapted into a movie produced by Steven Spielberg.

Some of the pieces in the exhibition show Talbott’s process, with a number of rough sketches from his development of book covers, he said.

The exhibition is organized by book, and Talbott shares commentary throughout the exhibition about the process of creating each story, such as venturing into the depths of the Amazon rainforest, traveling with a wildlife veterinarian or meeting with his friend who rescued hundreds of Jews during the Holocaust.

“Each book sort of has a story that goes along with it, a personal story, so it’s fun for me to have that opportunity to share my stories and my experiences and why I would do a book about that subject,” he said.

The exhibition includes work from 14 of Talbott’s more than 20 books, he said.

“The hard part really was editing it down,” he said. “I have so much work generated and obviously I couldn’t put everything in ... it’s like choosing between children, you know?”

Talbott plans to launch his next book, “A Walk in the Words,” at Hudson Hall in August. The story is about Talbott getting comfortable with being a slow reader, and being “a little dyslexic,” but still loving storytelling, thus pursuing art, Talbott said.

“It’s sort of my own story and I hope it is supportive and inspiring to other kids who struggle with reading,” he said. “That’s really what it’s about.”

“It’s incredible to see our local arts and cultural organizations able to welcome visitors again after having their doors closed for 18 months,” Hinchey said Monday. “It was an absolute pleasure to stop by the historic Hudson Hall for their recent retrospective art exhibit featuring the incredibly talented local Catskill resident, Hudson Talbott. Hudson’s work tells critically important stories in authentic and accessible ways — from his history of life along the Hudson River, to whimsical children’s books, to chronicling the Nazi invasion of Holland, Hudson’s talent should be experienced by everyone. It was an honor to join for the opening of the exhibit and I encourage everyone in the area to stop by Hudson Hall to check it out.”

Delgado also praised Talbott and the opportunity to attend the preview.

“It was great to be back at Hudson Hall to view the amazing work of Hudson Talbott with the man himself,” Delgado said Monday. “Hudson continues to create powerful art while preserving and supporting the works of local artists. I’m thankful we can once again join together at cherished community institutions like Hudson Hall to celebrate our region’s storied tradition of art.”

City Treasurer Heather Campbell also attended the preview on Friday. Talbott’s illustrations and children’s books are some of her favorites, she said.