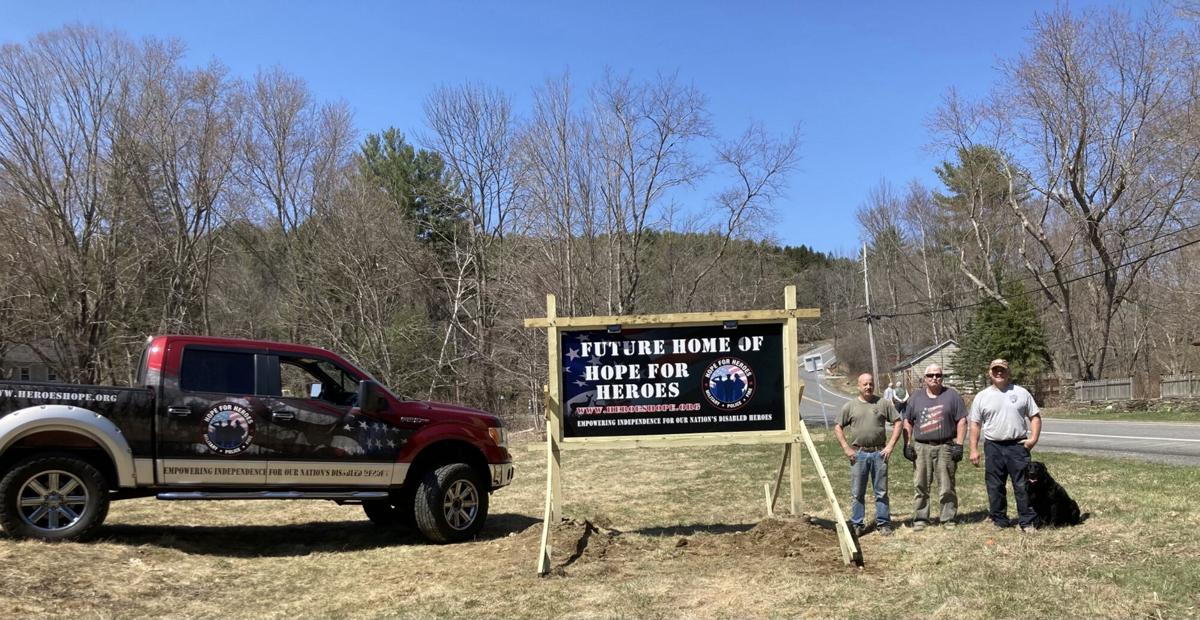 Members of the group pose with the newly built sign. Courtesy of Hope for Heroes 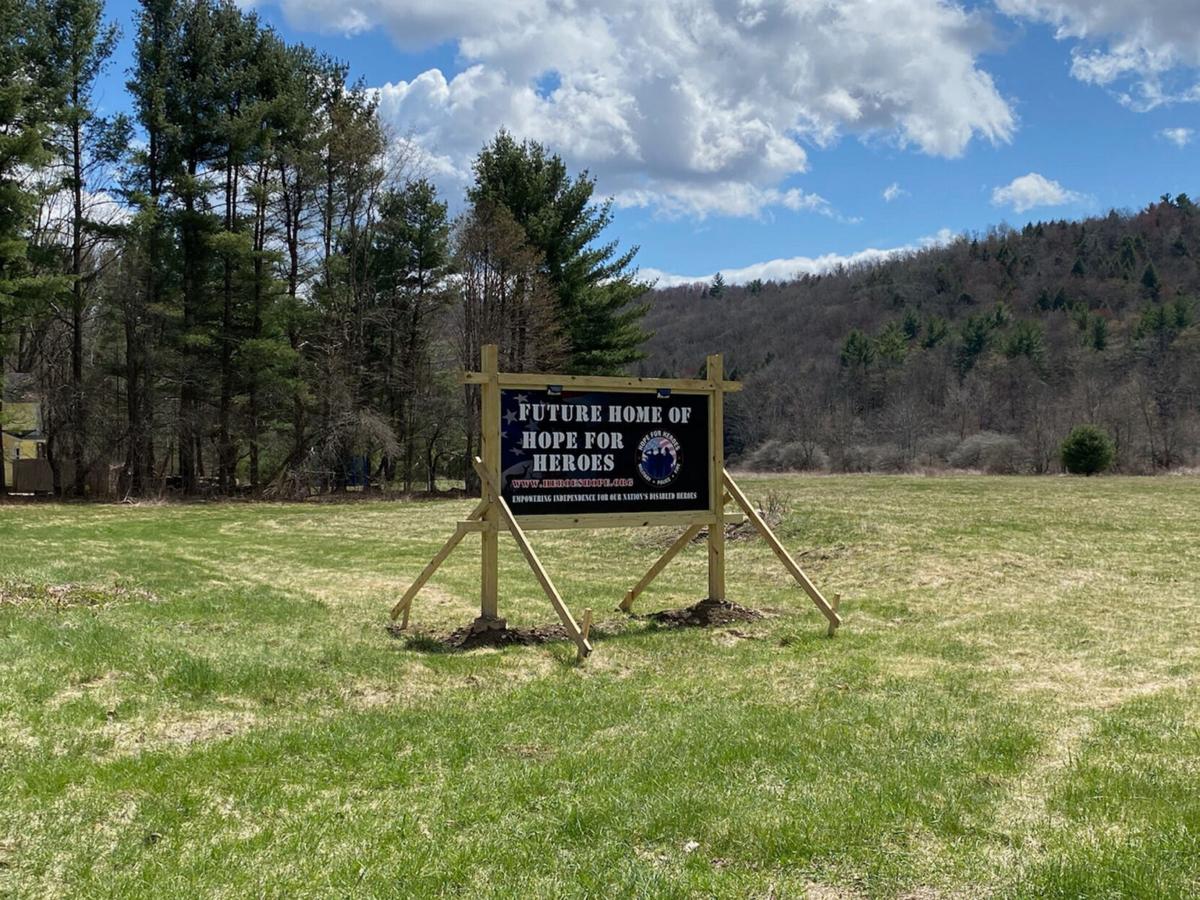 The Hope for Heroes sign in Hillsdale. Contributed photo

Members of the group pose with the newly built sign. Courtesy of Hope for Heroes

The Hope for Heroes sign in Hillsdale. Contributed photo

HILLSDALE — The Hope for Heroes Foundation has gained attention in Hillsdale for a sign put up on their property on Route 71, just off of Route 22.

The Dutchess County based nonprofit organization was founded by Executive Director Mitch Serlin, a retired Westchester County K9 police officer and U.S. Army 101st Airborne Scout Sniper, in 2010. Serlin has struggled with post-traumatic stress disorder and formed Hope for Heroes to provide experiences that are physically and emotionally feasible for veterans and emergency responders with disabilities.

The group has a three-bedroom get-away on 1,530 acres in Kentucky where members hunt and fish and plans to build a six-bedroom house in Hillsdale.

But some residents have been caught off guard by the organization’s presence in the town.

Resident Alex Bloomstein brought up the organization at the town board meeting Tuesday night. He said he noticed a sign for the organization and was caught off guard by its plans to build. The language used on the organization’s website and social media looks like they have a big definite project for the location, he added. “I just wonder if anyone in the town knows anything about what’s planned there,” he said.

Bloomstein pointed to language on the organization’s website: “Our most ambitious plan is the construction of a 120-acre, handicap-accessible lodge in beautiful Hillsdale, New York, where Heroes can gather for outdoor events, which will include hunting, fishing, kayaking as well as skiing.” The organization has photos of people digging a hole to install the sign, he said. Bloomstein said the group used an excavator for the sign and does not believe the group got a permit for its sign or any construction.

Hope for Heroes Foundation posted on Facebook April 11 thanking donors and announcing the future site of its Hillsdale lodge: “This sign signifies more than just a place holder for our future lodge, it represents hope to so many more future heroes that we will be able to reach!!!”

Deputy Town Clerk Elizabeth Sheer said she spoke with town Building Inspector and Code Enforcement Officer Lee Heim, who said he has not been contacted by the group. Sheer assured the board that nothing is being built at this time other than the sign.

Barbara Pascale Olsen, Planning Board chair, said some information was presented to the board last summer, but not an application or site plan. The zoning board determined the group was excempt from Planning Board review as a not-for-profit organization, she recalled.

Ward said anyone building anything in the town is subject to Planning Board approval, regardless of being a charity. Tiger agreed, saying there are no exceptions.

But engineer Pat Prendergast, of Valatie, who presented the group’s project to the zoning board, said the town code states non-profit organizations do not need site plan approval on properties over 10 acres.

Town Supervisor Christian Kersten said he spoke to the Sheriff’s department after receiving complaints from residents about men on the property shooting guns into the air.

Serlin said Wednesday the group plans to have some hunting excursions on the property but will not be turning it into a shooting range.

Hunting is among other activities the group plans to partake in on the property and in the community. “Columbia County just affords so much,” Serlin said.

The group plans to produce maple syrup, forage, ski, fish and potentially snowmobile. While the land will be the group’s main site, they plan to support local businesses, he said. “Based on what our needs are we are bringing tourism and shining a light on Columbia County because some of the individuals that will be with us have never been there before and didn’t know about it,” he said. “... I think Hillsdale and Columbia County is one of the nicest places in the country.”

Hillsdale is not unfamiliar territory for Serlin. His family visited on weekends as he grew up, going to Catamount and Copake Lake. “I’ve been in the community since I’ve been a kid,” he said. “The area is just so beautiful, you can’t beat the Hudson Valley.”

Serlin’s organization serves about 50 individuals per year, but he hopes that will increase with the Hillsdale property.

“Once we get a foothold there and we start doing some events, the numbers will increase, but it won’t be thousands,” he said. “It’ll be hundreds or whatever.”

The group typically hosts between four and six individuals, and sometimes up to 10, at events. The group plans to build a six bedroom home on its Hillsdale property but does not yet have a construction timeline, because they are fundraising for expected $1.2 million costs.

“Unfortunately until we get some of the funds we don’t have a targeted date yet but once we secure the funds for the building and we hear back from the grant process we may have a better idea of when we’re going to start the project,” he said.

Many of the group’s donors are in the Northeast, and Serlin likes inviting donors to participate in group events rather than just sending a check, which gives Hillsdale another appeal.

“I love Kentucky, but the money is in the Northeast,” he said. The group bought the Hillsdale property in the fall and has used it for hunting and metal detecting, Serlin said.

“We’re just an organization just trying to help heal and empower,” he said. “As we put it, we empower the independence for our nation’s disabled heroes. That’s all we’re trying to do.”

its cool that they were able to use an "escalator" to put the sign in!

Back to learning: Tips to avoid a heavy load

The right advisor can boost your financial health

Save Money in the Kitchen Every Day

Kids and the COVID vaccine: What should a parent know?

Tips to Ease the Stress of Relocating to a New Area