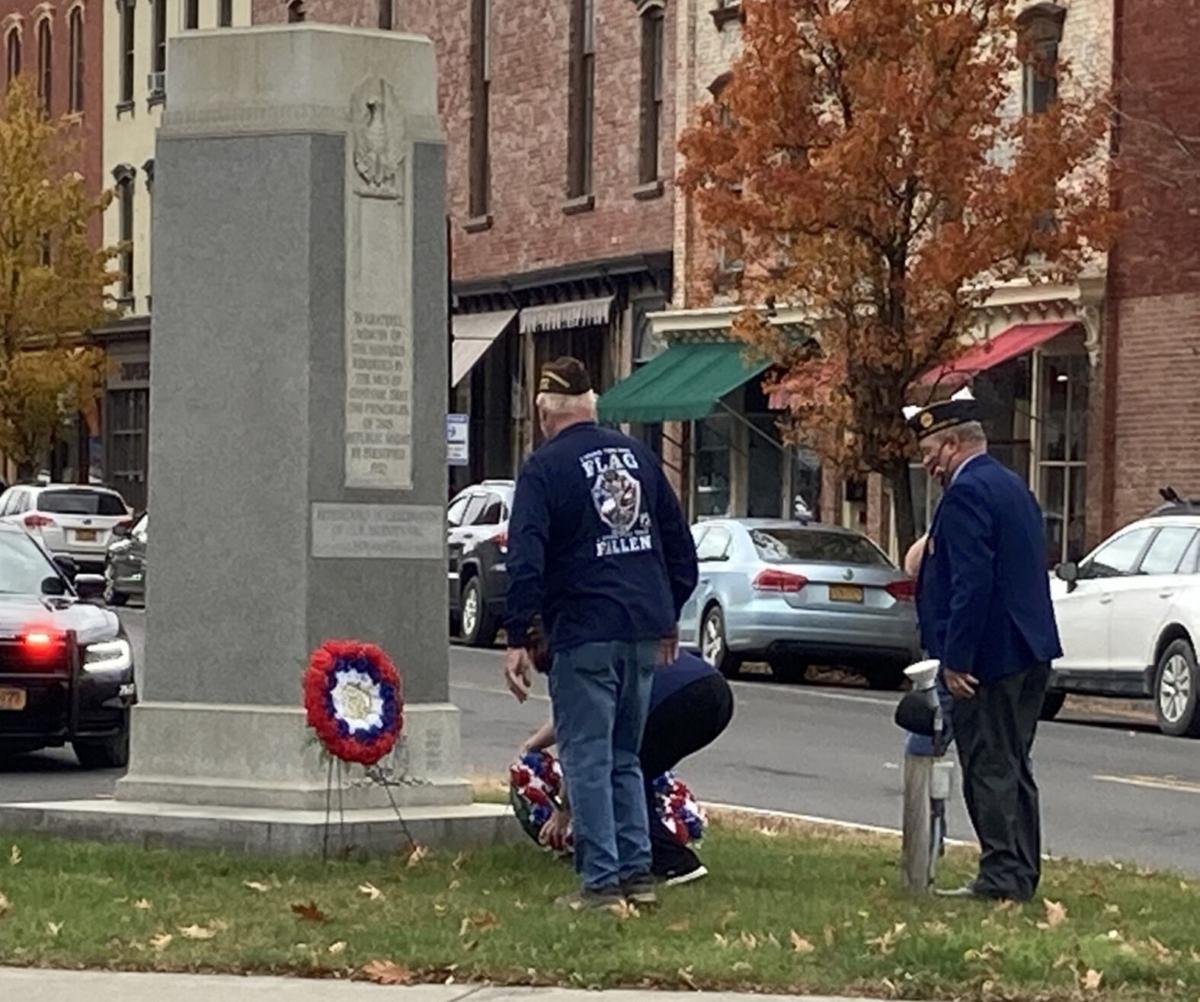 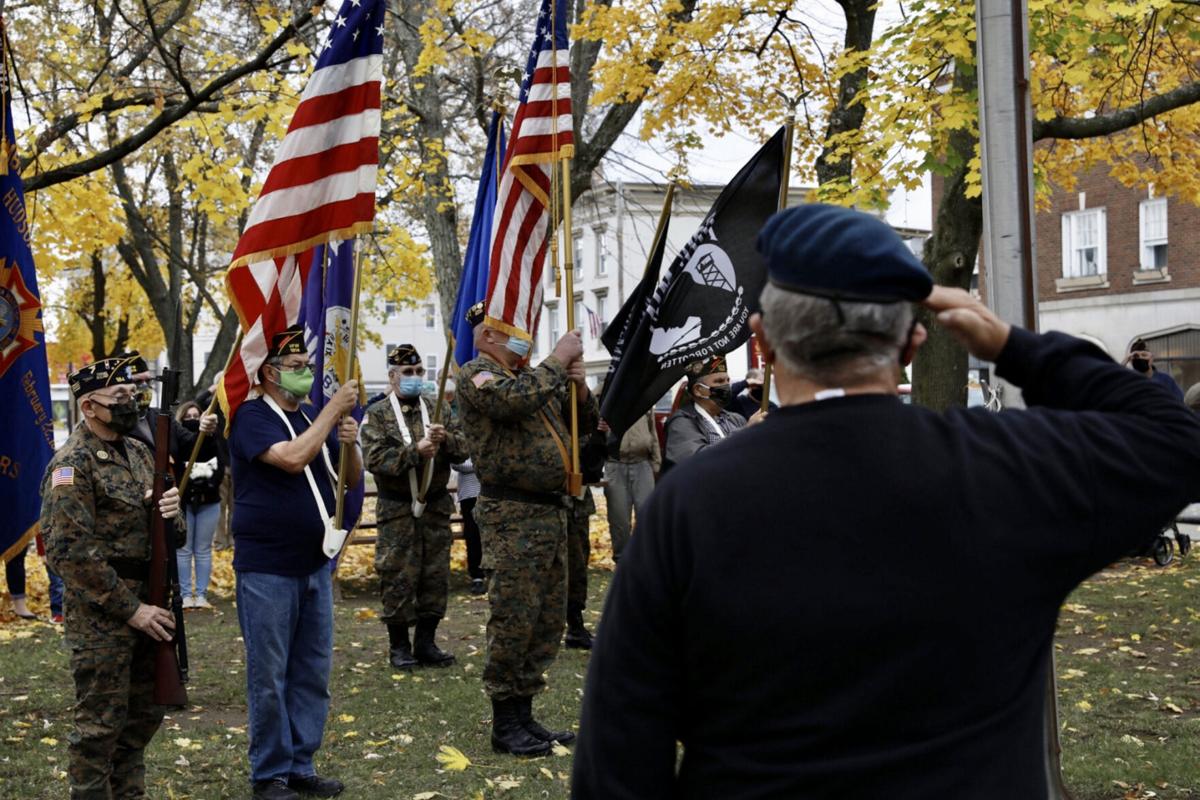 A veteran salutes the flag during Wednesday's ceremony in Hudson. Aliya Schneider/Columbia-Greene Media 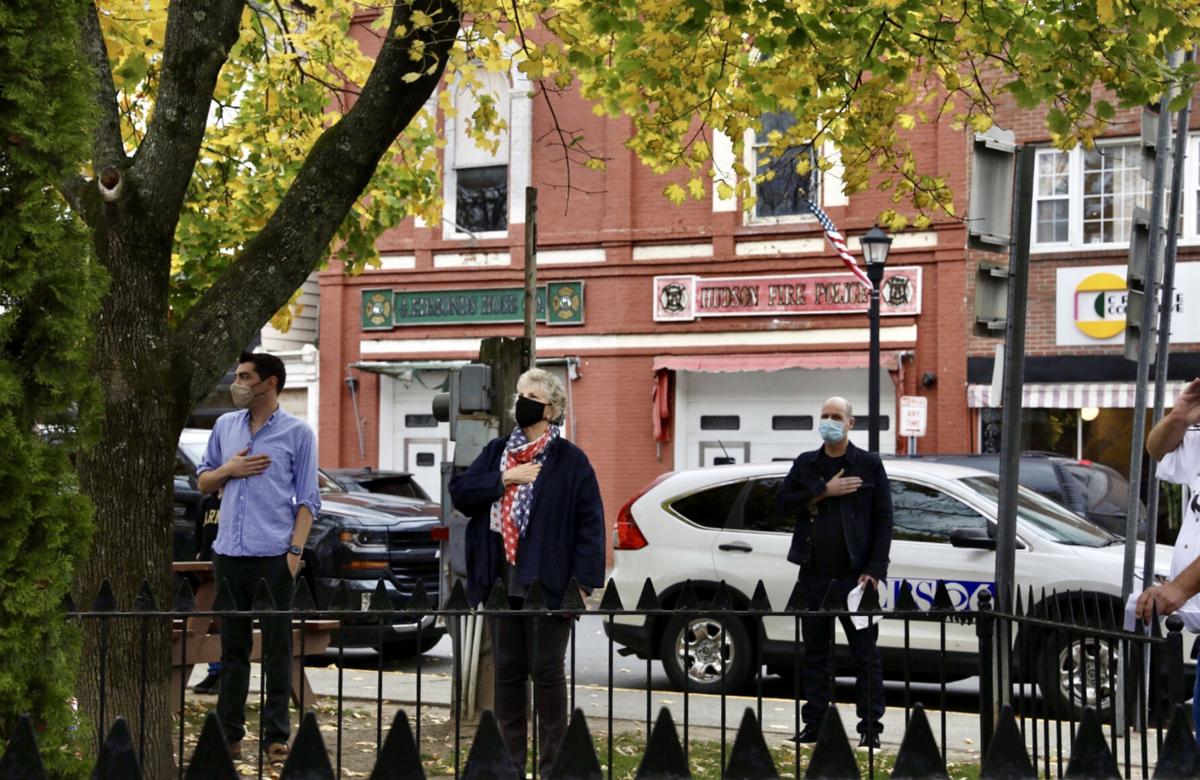 Assemblywoman Didi Barrett, D-106, center, puts her hand on her heart during the ceremony in Seventh Street Park in Hudson. Aliya Schneider/Columbia-Greene Media 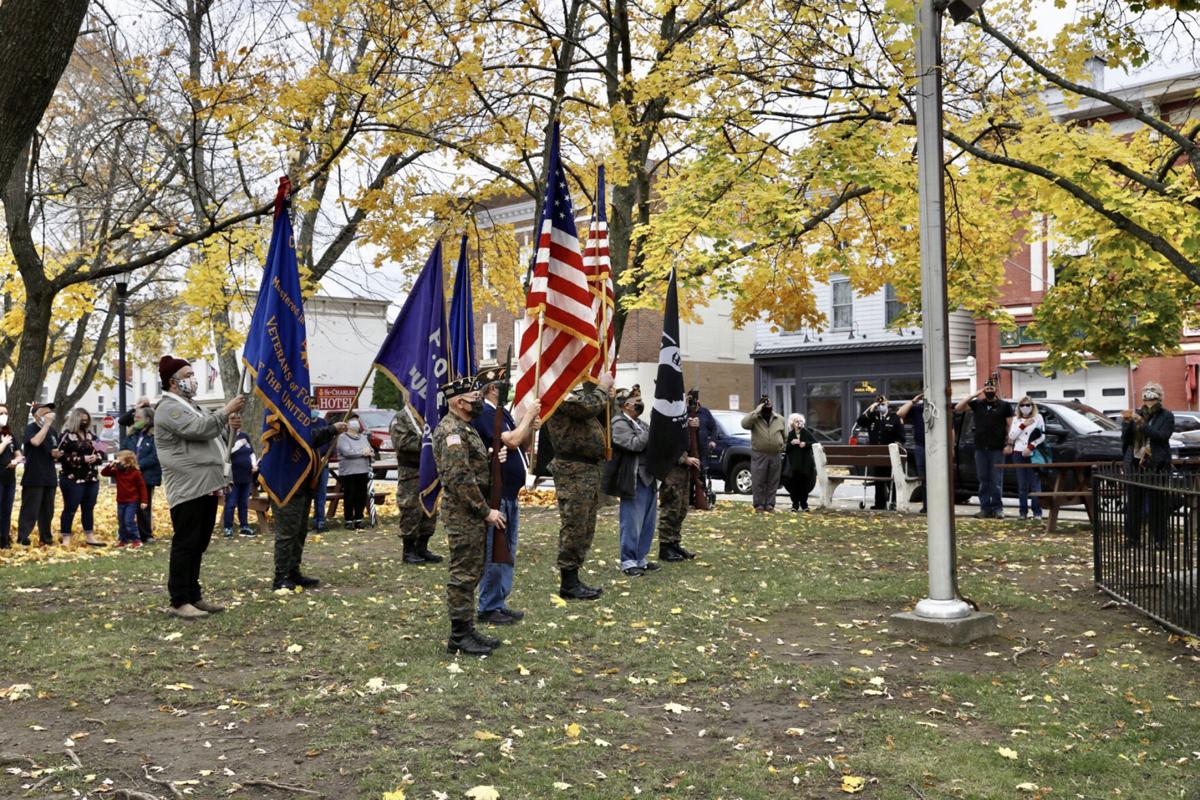 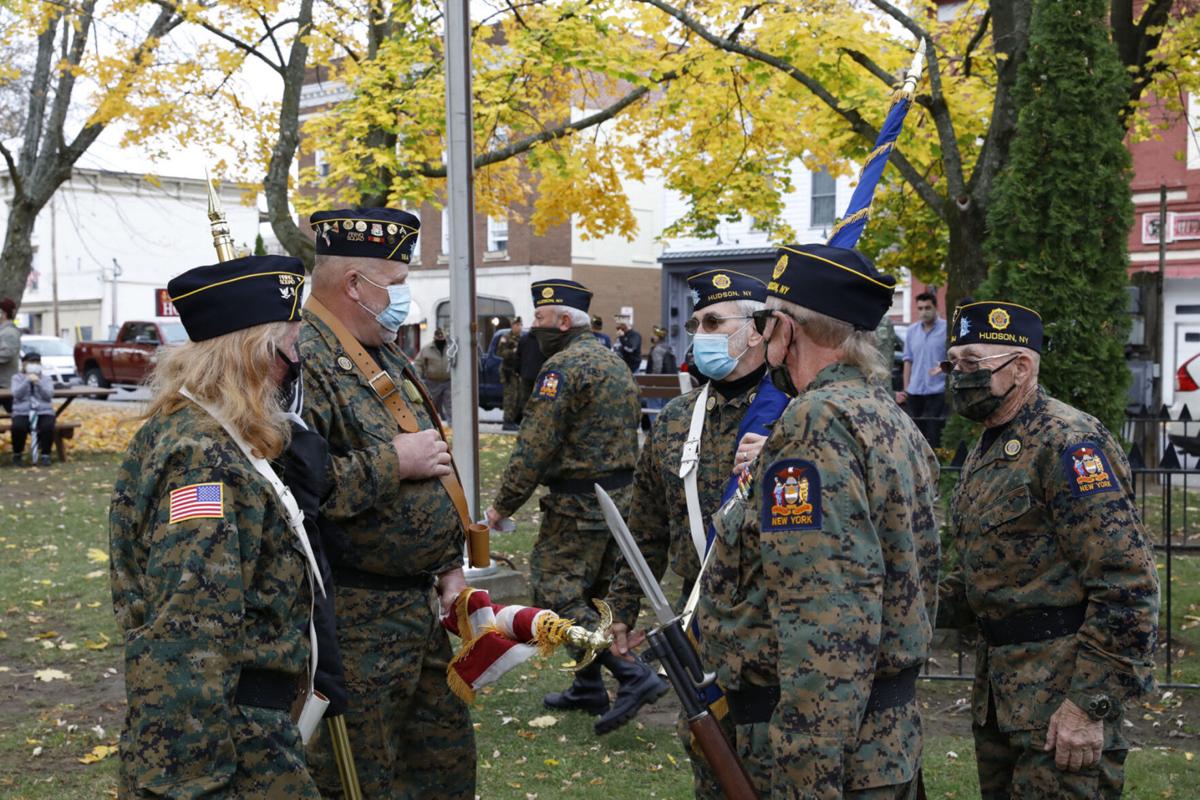 Veterans talk with one another after the ceremony in Seventh Street Park in Hudson on Veterans Day. Aliya Schneider/Columbia-Greene Media

A veteran salutes the flag during Wednesday's ceremony in Hudson. Aliya Schneider/Columbia-Greene Media

Assemblywoman Didi Barrett, D-106, center, puts her hand on her heart during the ceremony in Seventh Street Park in Hudson. Aliya Schneider/Columbia-Greene Media

Veterans talk with one another after the ceremony in Seventh Street Park in Hudson on Veterans Day. Aliya Schneider/Columbia-Greene Media

This year marks the 101st anniversary of the first Armistice Day.

In 1919, President Woodrow Wilson proclaimed Armistice Day after the end of World War I. It was made a legal holiday in 1938 primarily to honor veterans of World War I, according to the U.S. Department of Veterans Affairs website.

In 1954, Nov. 11 became known as Veterans Day and became a holiday to honor American veterans of all wars.

Local veterans and supporters stood among the orange leaves in the park for the ceremony.

The parade was not held this year.

The parade was canceled because of the pandemic, she said, and while it doesn’t feel the same, the groups made the best of it.

“We still stood behind our veterans, and today I actually stood next to one of our veterans, so yeah, it was still a good day,” she said, “Any day with my veterans is a pretty awesome day.”

Sue Ann Shetsky attended the ceremony with family. They’ve been coming for years, she said.

“My dad and my uncles were all in the service — the Marines and the Army, so it means a lot,” she said of the holiday. “It just means a lot to us, and just trying to pass it down to the kiddies so they appreciate where we live in the USA.”

“I don’t come from a military family myself and I’m not a veteran,” she said. “But to really understand the veterans’ community and their needs, and as the first woman to chair this committee, I have put my focus to a certain extent on women veterans and their particular needs and issues, but also on the importance of behavioral and mental health.”

Veterans have been disproportionately impacted by food insecurity and limited access to transportation and medical care during the pandemic, she said.

“Suddenly everybody was saying, Oh, you know, let’s have telemedicine, let’s do all this online,” Barrett said. “But if you don’t have internet or you don’t have adequate internet and you don’t have a device that really helps you see who you’re talking to, going to an AA meeting online or having telehealth with your therapist is not really going to take you very far.”

The Outdoor Rx Act, which Barrett sponsored, has been delivered to Gov. Andrew Cuomo for review. The legislation requires the division of veterans’ services to review veterans’ access to the state’s parks, lands and facilities.

“I just heard earlier this morning, I think the governor is going to be signing my legislation called Outdoor RX, which really focuses on supporting wellness and recognizing the therapeutic benefits of outdoor recreation,” she said.

The SUNY Veteran and Military Action Council was introduced Wednesday by State University of New York Chancellor Jim Malatras. The council will work to implement policy shifts to increase access to education for military-connected students.

The council will develop a plan to reduce the cost of college by $5,000 over four years for active military, reserve and National Guard students and methods to transfer military service into college credit at SUNY schools. Implementation is expected by fall 2021.

Several police cars, fire trucks and vehicles carrying waving veterans drove in the parade led by flag bearers and honor guards that marched the parade route along Woodbridge Avenue and down Kinderhook Street.

“We are here to remember. We are here to honor all brave veterans who have served in the military since the founding of our country and those still serving,” said Jim Garvey, post commander for Chatham American Legion.

A number of people stepped out of houses along the parade route to wave at the passing veterans. The 15 minute parade concluded at the Main street gazebo in Chatham.

About 30 veterans and spectators gathered on Main Street for a brief ceremony.

Garvey called the current virus and pandemic a new war. He explained COVID restrictions this year required everyone in attendance to wear masks and stay 6 feet apart, and that gatherings have a limit of 50 people.

“To give some perspective on this new war, 33,373 people have died (of COVID) in New York state,” Garvey said. “37,324, died in the American Revolution, and there’s millions dying wordwide. This may be a virus to some, but it’s just another war.”

Members of the American Legion and the VFW placed three wreaths on the veterans’ monument across from the gazebo. The firing squad also gave a gun salute in honor of the holiday.

“While many veterans are humble, there is no such thing as an insignificant military service,” Garvey said.