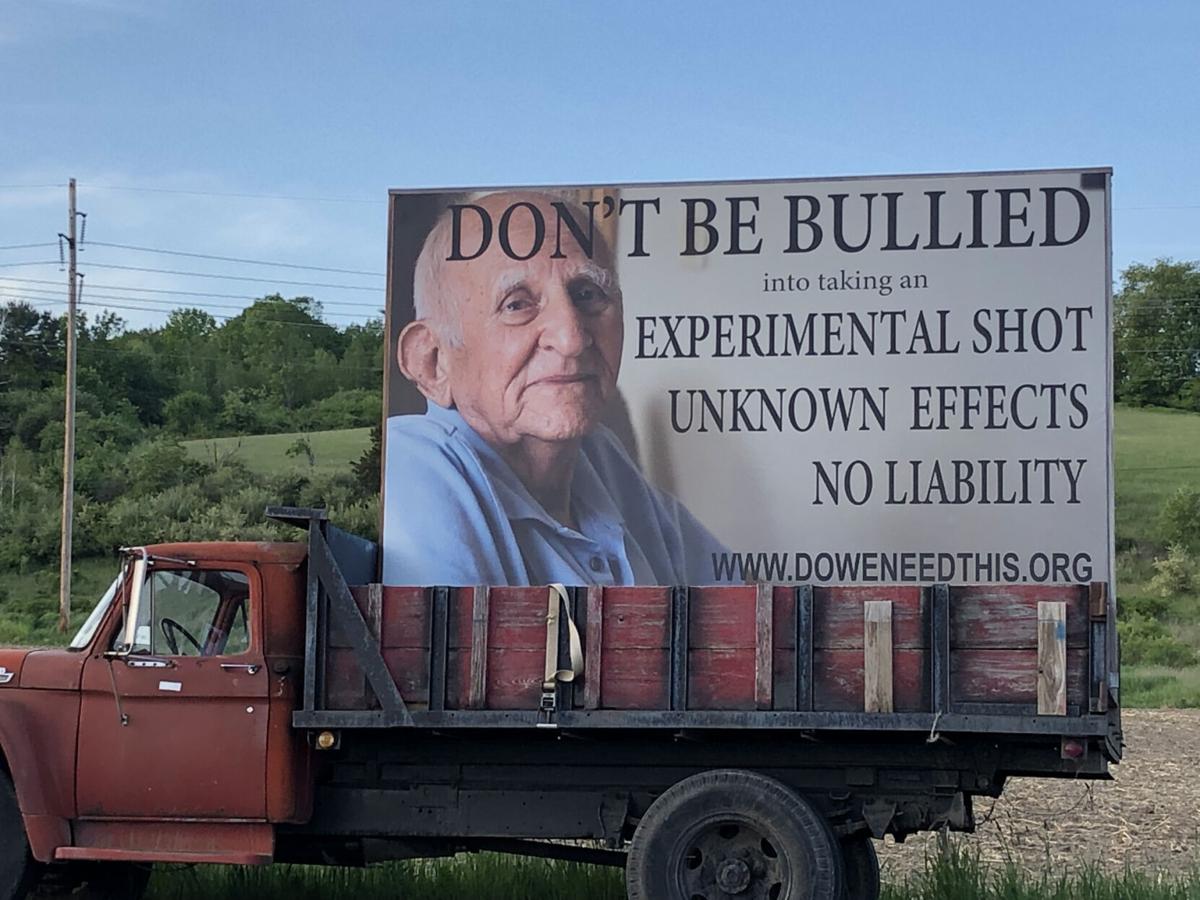 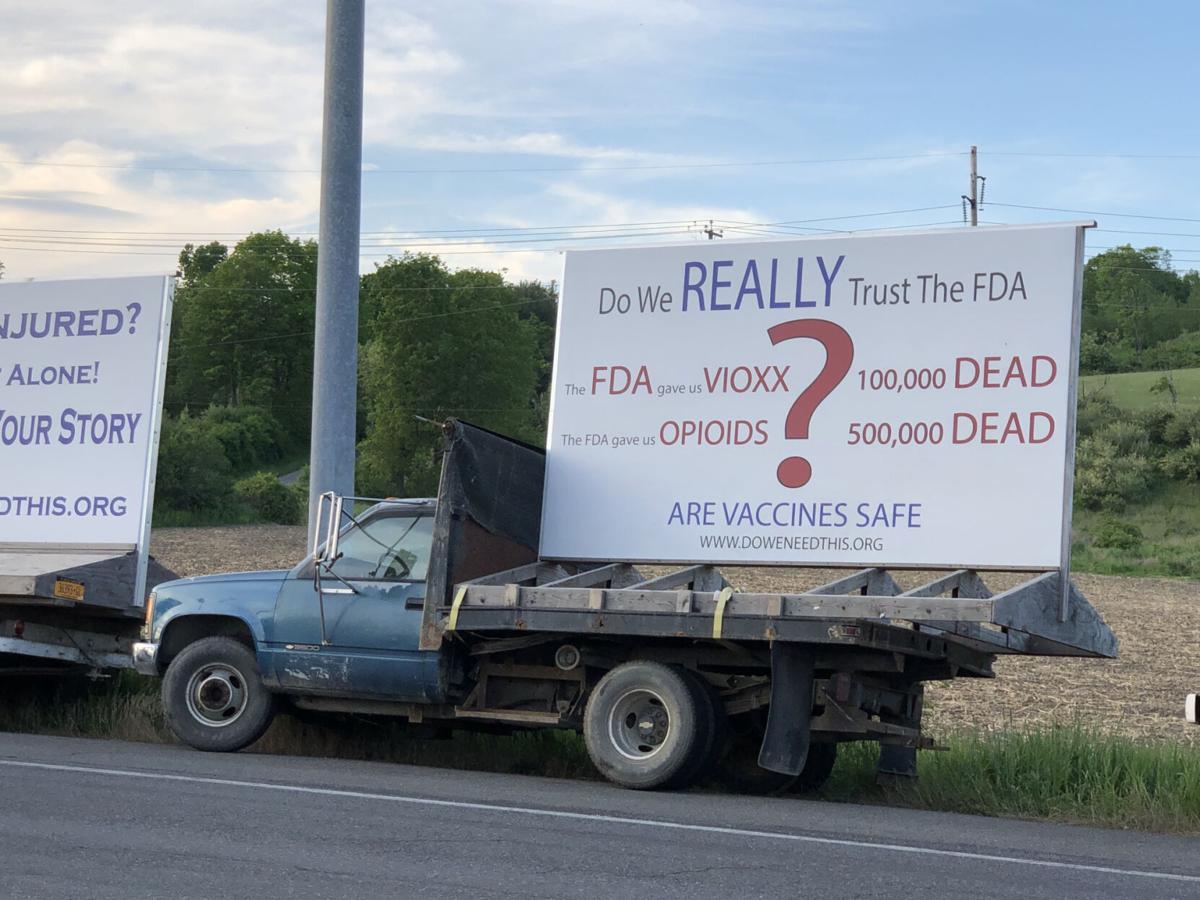 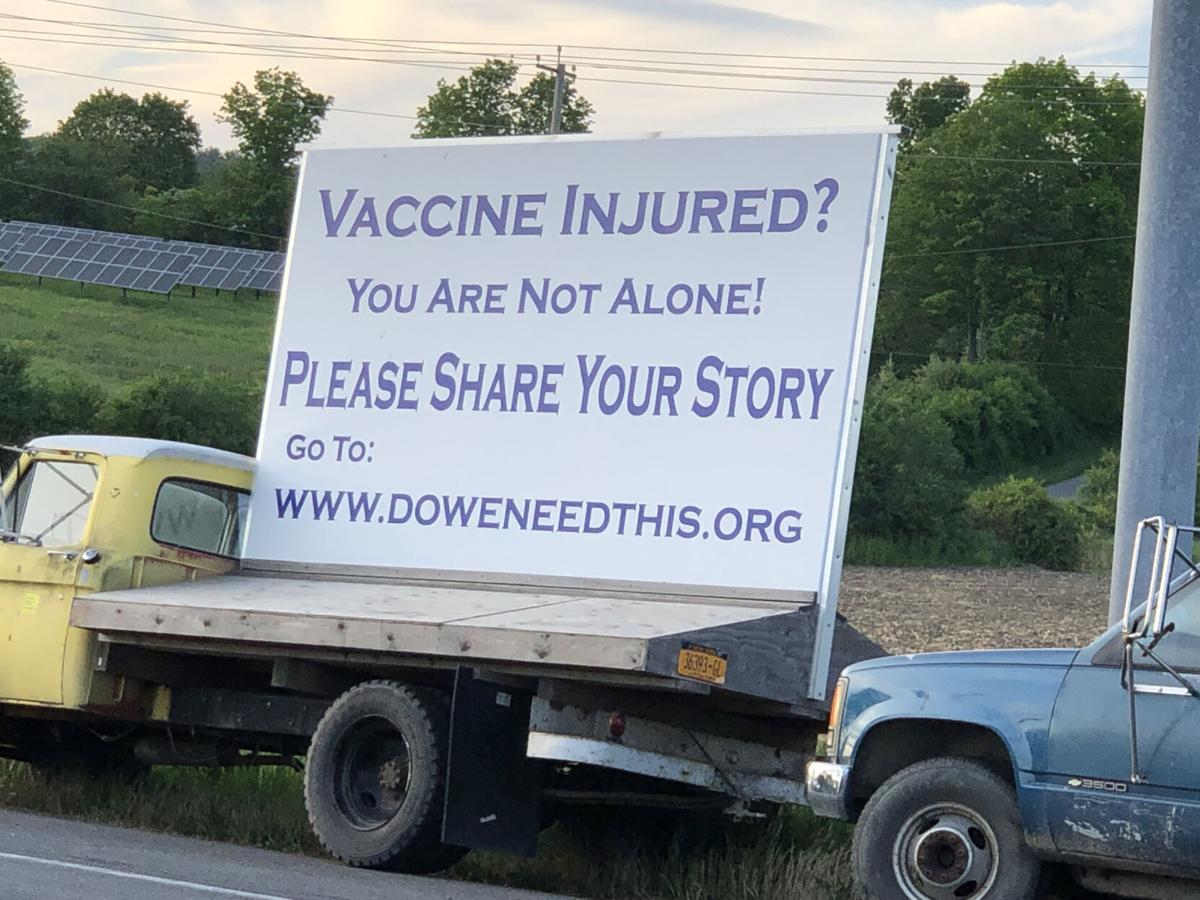 CRARYVILLE — A local anti-vaccination group parked trucks with billboards along the intersection near the Taconic Hills Central School District the day before a clinic at the school.

Three trucks with billboards atop them were parked Tuesday along the intersection of Route 23 and Route 11A, which leads to the school district. The signs bore messages critical of the COVID-19 vaccine.

There is a walk-in vaccine clinic at the school district from 3 p.m. to 5 p.m. Wednesday, Columbia County Director of Health Jack Mabb said. While the group has the right to express its First Amendment rights, their viewpoint is not based on science, Mabb said Wednesday. “It’s a free country,” Mabb said. “They can express their opinion. I have been concerned about these folks showing up at some of our school district pods and causing an issue. I am really glad they haven’t.”

Taconic Hills Superintendent of Schools Neil Howard said Wednesday it is the group’s right but he supports the COVID-19 vaccination efforts and trusts the science behind it.

“They have First Amendment rights,” he said. “You’ve also got your right to hit yourself in the head with a hammer and eat a stick of butter and I wouldn’t recommend those. People have a right not to get a vaccine, at this time anyway, so they can exercise that.”

The district has given those 12 years and older the opportunity to get vaccinated and sent letters to parents with the information for how to get vaccines, along with consent forms.

The group did not realize there would be a clinic the next day but knew there was talk of a clinic within the district.

“Don’t be bullied into taking an experimental shot,” one of the signs read.

Hillsdale resident Patrick Connors saw the signs next to the traffic light shortly after 7 p.m. Tuesday at the intersection of Route 23 and Route 11A, which leads to the school district. He said the signs were near sports fields and seemed to be placed in the closest location possible to the school without being on school property.

“At a time when we’re making significant progress in fighting this deadly pandemic and resuming our lives thanks to the proven effectiveness of these COVID-19 vaccines, it’s disturbing and downright dangerous that people are trying to confuse and frighten members of our community with disinformation, like that in these signs, about these life-saving vaccines,” he said Wednesday.

Tod Wohlfarth of Hillsdale saw the signs when he left the school after a policy committee meeting at 5:30 p.m Tuesday.

Erich Kress, who owns the trucks, said he parked the trucks around 7 a.m. Tuesday and took them home gradually between 8 p.m. and 11 p.m. The trucks were parked on the shoulder of the road, which he learned was legal from the sheriff’s department, as long as there aren’t any no-parking signs and there is enough space away from traffic that the parked vehicles do not pose a danger, Kress said Wednesday. Kress wanted to take advantage of the spot being legal to park. “I figured if people don’t like them they will put no parking signs there soon,” he said.

Kress knows the district has had talks about hosting a clinic but does not know the details of when, he said Wednesday afternoon, just hours before the school clinic.

“We didn’t want to wait until there is a clinic,” he said. “We wanted to get people thinking about it before there is a clinic, and hopefully there won’t be. But maybe there will and the messages on the signs, of course, speak for themselves and the hope is to be proactive in educating young people.”

Kress also hopes to park the trucks near the Ichabod Crane and Hudson city school districts.

The trucks were unattended throughout the day and Kress left his phone number in the window.

“Some people are happy and smile and wave, and other people look the other way and are grumpy, but I think there has been pretty good reception actually, people are happy to see them there,” he said.

Howard said Wednesday most people who contacted him about the signs wanted them taken down. Howard said the anti-vaccine group is in the minority.

Howard has been in contact with people who support the vaccine and has not heard from people fearing the inoculation will hurt their children.

Howard does not know if the group has had any effect on students getting the vaccine, he said Wednesday.

“We have the smartest minds in the world working on COVID-19,” he said. “I trust the science. I trust the math and the world has certainly changed. My focus is getting children as safely as possible back into school so that we can do as much direct instruction as possible. So they have their First Amendment rights. I totally support that, but it’s the same math and science that we teach in our school that supports the use of vaccines.”

Howard has not heard about efforts from the group to protest the clinic Wednesday.

“I don’t know who this group is,” he said. “I’ve got a lot of other things that I have to be concerned about.”

Howard saw the signs Tuesday but they were not there this morning, he said. He does not know how long they were visible. The group was not on school property.

“The only thing I’m worried about is they’re on the shoulder of the road and they may cause an accident,” he said. “There is a stoplight there and you have people passing and pulling to the left, pulling to the right. It presents a dangerous situation. I know I was concerned about that.”

The signs reference a local anti-vaccination group called Do We Need This.

Kristin Buckbee, who is involved with Do We Need This, said Wednesday the organization is more of a network than a group. “There really isn’t a group of people,” she said. “There is a network of people and it’s not homogenous so an individual or some people take on a particular initiative or cause and then maybe certain people in the network hear about it and help with it or not. There is all kind of activities but they don’t actually come back to the same circle of people ever, not yet anyway.”

Thankfully they are in the MINORITY as we vaccinate more and more each and EVERY day.

What is wrong with people that feel a need to make such public displays telling the world they don't believe in something. You don't want the vaccine, Fine. We don't care, its your right. Why are you so threatened by people who advocate for it that you have to put up a sign.