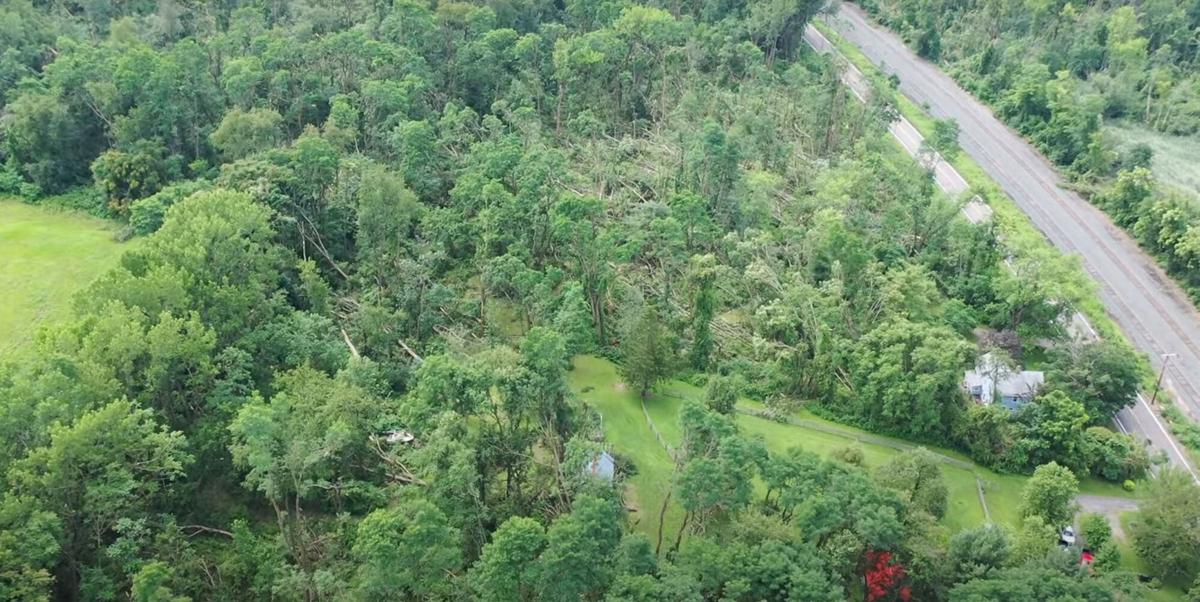 STUYVESANT — Town of Stuyvesant officials over the weekend were able to get a good look at the extent of damage left behind by last Wednesday’s severe thunderstorms.

“There was incredible damage that we were not able to see from the main roads,” Montie said.

Stuyvesant First Assistant Chief Stephen McGrath estimated last week that between 250 and 400 trees came down during the storm.

“He was very close in his estimation,” Montie said.

The department also wanted to see what path the storm took so they could plan for future storms, Montie said.

National Weather Service investigators determined it was a macroburst with straight line winds that reached 100 mph that moved through the area.

Route 9J and roads that intersect with 9J were the hardest hit. Areas south of county Route 26A saw the most damage.

Stuyvesant Town Supervisor Ron Knott viewed the video from the drone on Sunday.

“Thank God there was not too many houses in the way of that storm,” Knott said on Monday.

The majority of the land that was damaged is owned by New York state. The rest is privately owned, and Amtrak owns a portion of it, Knott said.

Knott was pleased with the excellent job that was done by state, county and town highway crews.

“Originally we were told that 9J might have to be closed for six days. Through their hard work, the road was reopened in 24 hours,” Knott said.

Last week’s storm took the same path through Stuyvesant as a confirmed tornado did on July 21, 2003. Montie said.

That storm moved through Greene, Columbia and Rensselaer counties starting about 3:30 p.m., and left more than 63,000 customers without power, according to records from the National Oceanic and Atmospheric Administration.

Skin Care Tips for When Sun Season is Over