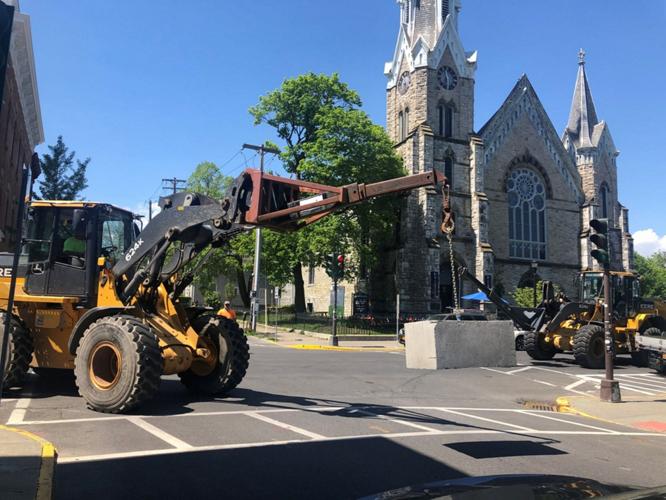 File PhotoDPW reinstalling the concrete blocks on May 17, 2021. 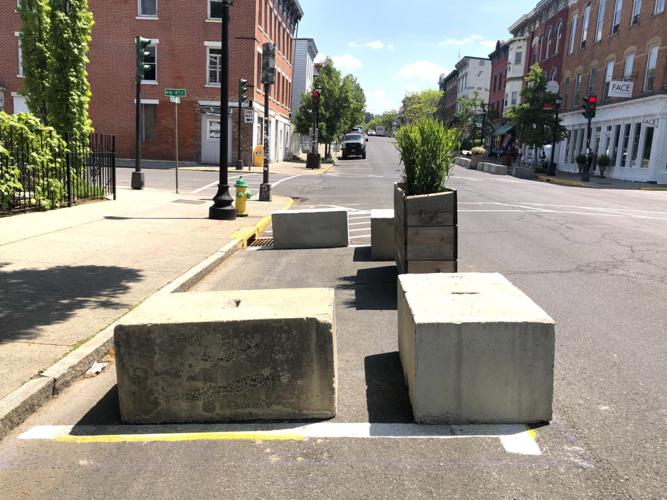 File PhotoConcrete blocks will return to Hudson this summer.

File PhotoDPW reinstalling the concrete blocks on May 17, 2021.

File PhotoConcrete blocks will return to Hudson this summer.

HUDSON — Mayor Kamal Johnson is in the process of finalizing details with the Hudson Business Coalition over logistics pertaining to the return of concrete street barriers meant to increase seating capacities for dining establishments over the summer.

Members of the greater Hudson community have wondered for weeks whether Johnson would authorize the return of the blocks for a third consecutive year.

Last week, 3rd Ward Councilmember Ryan Wallace, on behalf of the Common Council, emailed Johnson regarding the Council’s suggested recommendations for how to approach the execution of the effort, known as the Warren Street Seasonal Usage program.

On Thursday, Johnson met with Hudson Business Coalition President Alex Petraglia, who has partnered with the city to launch the program. After the meeting, Petraglia said the concrete block barriers and planters will return starting June 20 and remain in place until Oct. 3. He also said they would be available to all dining establishments in the city.

This differed from what Johnson said before the meeting. Initially on Thursday, Johnson said the program would start sometime the week of June 1, and that it would only be available for cafes, restaurants and juice bars without outdoor dining capabilities.

What constitutes outdoor dining is unclear in the city code. Craig Haigh, the city’s code enforcement officer, said Friday that what a business does with some of their sidewalk space is up to them. Businesses are allowed up to four feet of the sidewalk for outdoor seating as long as at least two feet of sidewalk is available for pedestrians to pass by.

Section 277-6 of the city’s code states “certain businesses can, on occasion, display their goods upon the public way in front of their place of business without impeding pedestrian traffic and that such displays, when properly maintained and controlled, can be a public convenience and will not adversely affect the surrounding area.”

Some businesses put out a sandwich board, and have small tables and chairs, though Haigh said nothing in the code refers to outside dining, a term he thought emerged from the pandemic when indoor dining was limited.

Johnson said after the meeting with the Coalition on Thursday that he is considering whether the program will be open to all dining establishments in Hudson or whether it will be restricted to cafes, restaurants and juice bars that do not have outdoor dining capabilities in the city.

Johnson defined outdoor dining in Hudson as a business with a designated courtyard or sufficient private space and not businesses that use the sidewalk for intimate table seating.

The different opinions illuminate a rift in consensus between the Coalition and the Mayor, who ultimately possesses sole authority to make decisions related to Hudson’s streets.

Last year, the program was in effect by Memorial Day. Petraglia said pushing back the start date has afforded the Mayor and the Coalition more time to iron out details of the rollout. Petraglia is drafting a memorandum of understanding that outlines the program details and formalizes the working agreement between the Coalition and the city of Hudson.

Petraglia said this year’s cost of the program, including the parking fees to be paid to the city, plants, soil for the planters, materials to repair and improve the planters, paint, reflectors and reflective tape will cost about $18,000.

“Last year there was a project manager who was being paid as well. That’s not the case this year,” Petraglia said Friday. “The Coalition is handling the planning and implementation, and we’re an all volunteer board of business owners in Hudson.”

Petraglia said the Coalition is in the process of trying to secure a grant to cover the cost of aesthetic and safety improvements of the barriers, fixing the planters, and covering the fees that businesses would otherwise have to incur for lost parking revenue. Both Johnson and Petraglia agreed that businesses will still have to pay a fee to help offset the costs associated with lost parking space revenue, regardless if any grant money is secured.

According to the Coalition’s non-final program detail sheet, participating businesses will have to make “reasonable accommodations” to provide at least one Americans with Disabilities Act-compliant table set. Also, according to the program detail sheet, this year’s program will adhere to a two-strike rule where a participating businesses first violation equals a warning, and the second results in a complete revocation of their ability to participate in the program. Businesses issued two strikes will have their barriers removed by DPW and incur a removal fee of $250 to the city.

“The Hudson Business Coalition is working on a grant to cover the cost of repairing the planters and we are coming up with a cost analysis for the lost revenue of the used parking spaces,” Johnson said.

Johnson also said businesses participating in the program would have to halt outdoor seating at 9:30 p.m.

“We want to be respectful to the residents that live on Warren Street,” he said. “This being the third year, we pretty much have been ironing out some of the hiccups from earlier years.”

Antony Katz, owner of MOTO, a cafe and motorcycle shop on Warren Street, said Thursday that he doesn’t want concrete blocks outside of his business, regardless of his eligibility for the program. “Last year, I felt like they were a road hazard,” he said.

No one was injured from car accidents Katz witnessed on Warren Street, but he felt they endangered drivers.

Hudson DPW Superintendent Rob Perry said Thursday that last year the process of reinstalling the blocks and planters took a day and a half with the help of crews from the county, Greenport and Claverack. He said the length of time it takes to install the blocks depends on how many blocks are needed for parking spaces.

In previous years the now defunct Tourism Board held the responsibility of orchestrating the money for purchasing the concrete blocks. In 2020, the city decided that providing the option to extend storefront operations into the parking lane would help support local businesses with post-pandemic economic recovery. Petraglia said Friday that the memorandum of understanding will be ready next week.

Sad to see this. The concrete walls are an eyesore and not contusive to traffic. Warren St. is not wide enough for this and two cars. I understand the concept but believe there has been enough time to figure out another type of barrier that is not so intrusive.