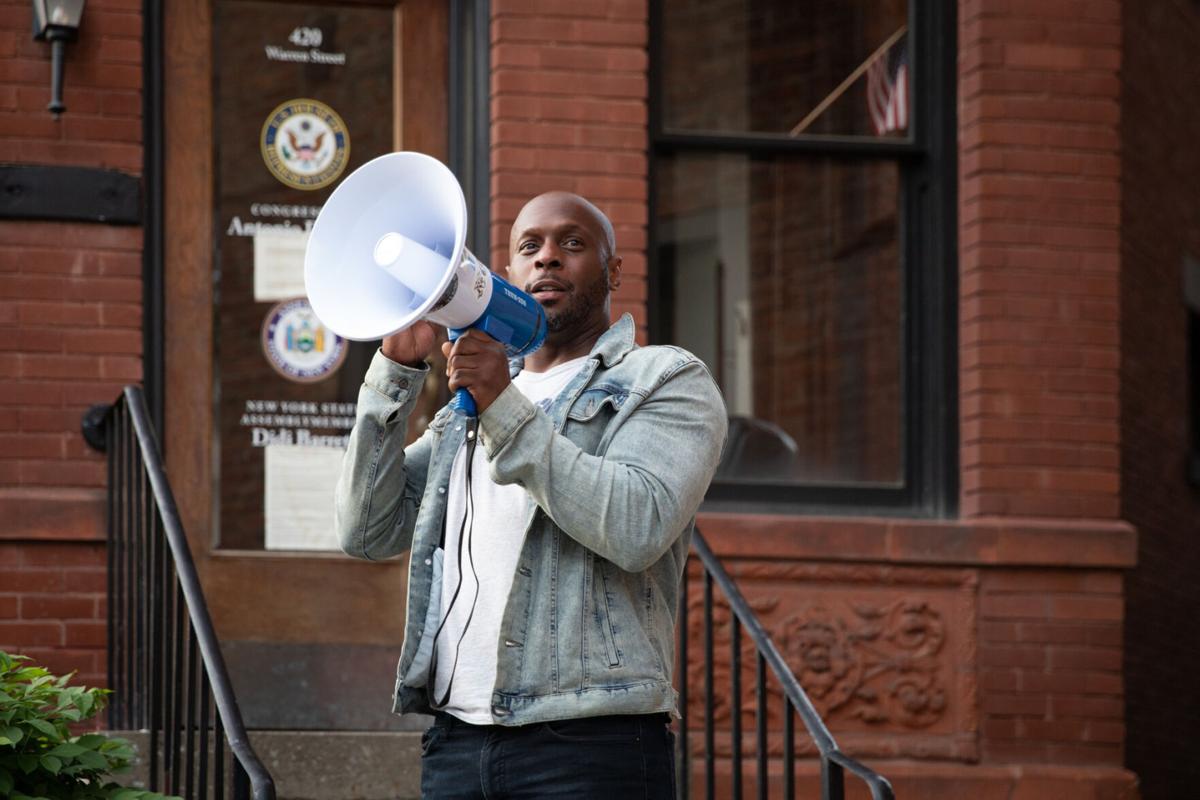 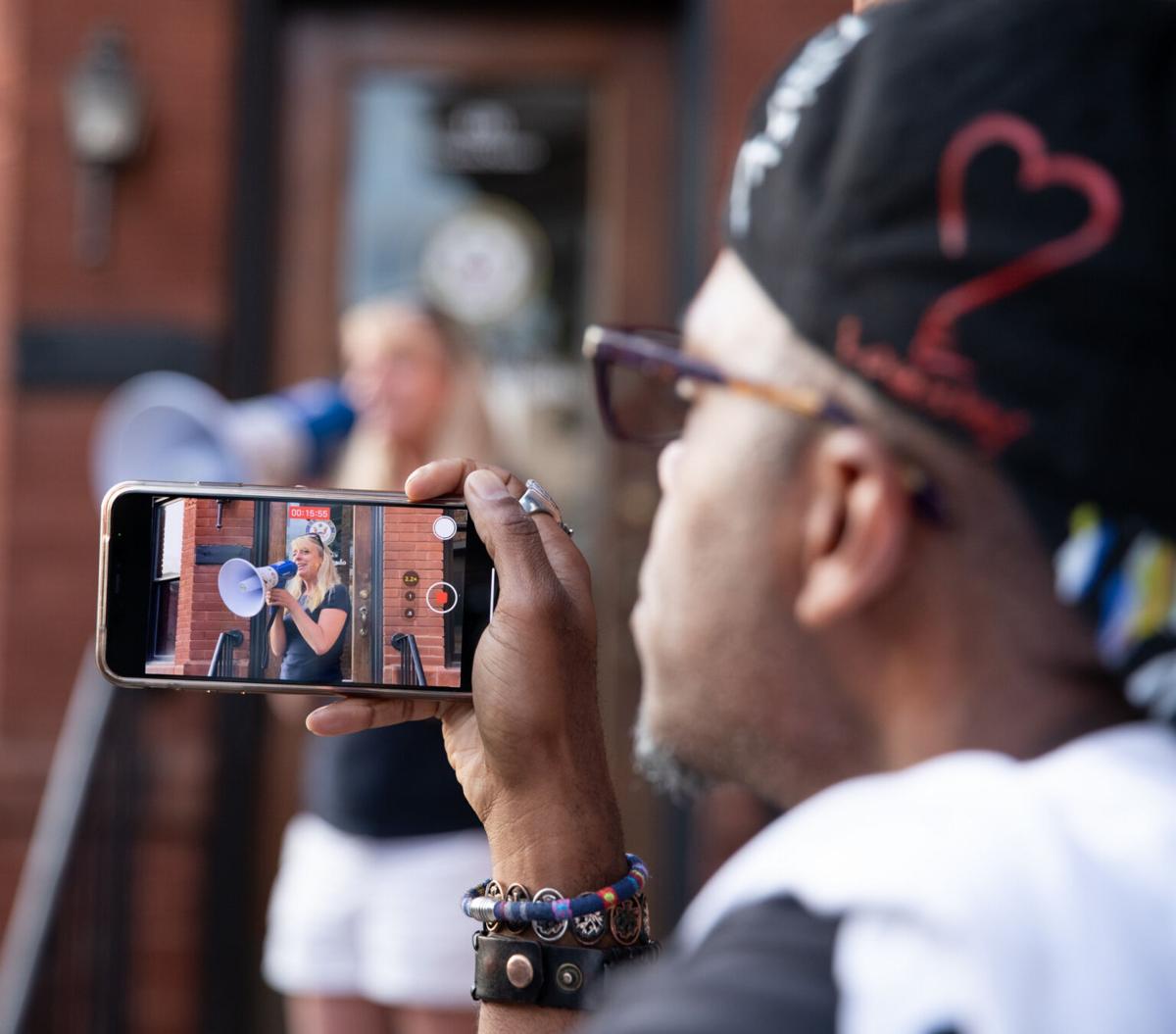 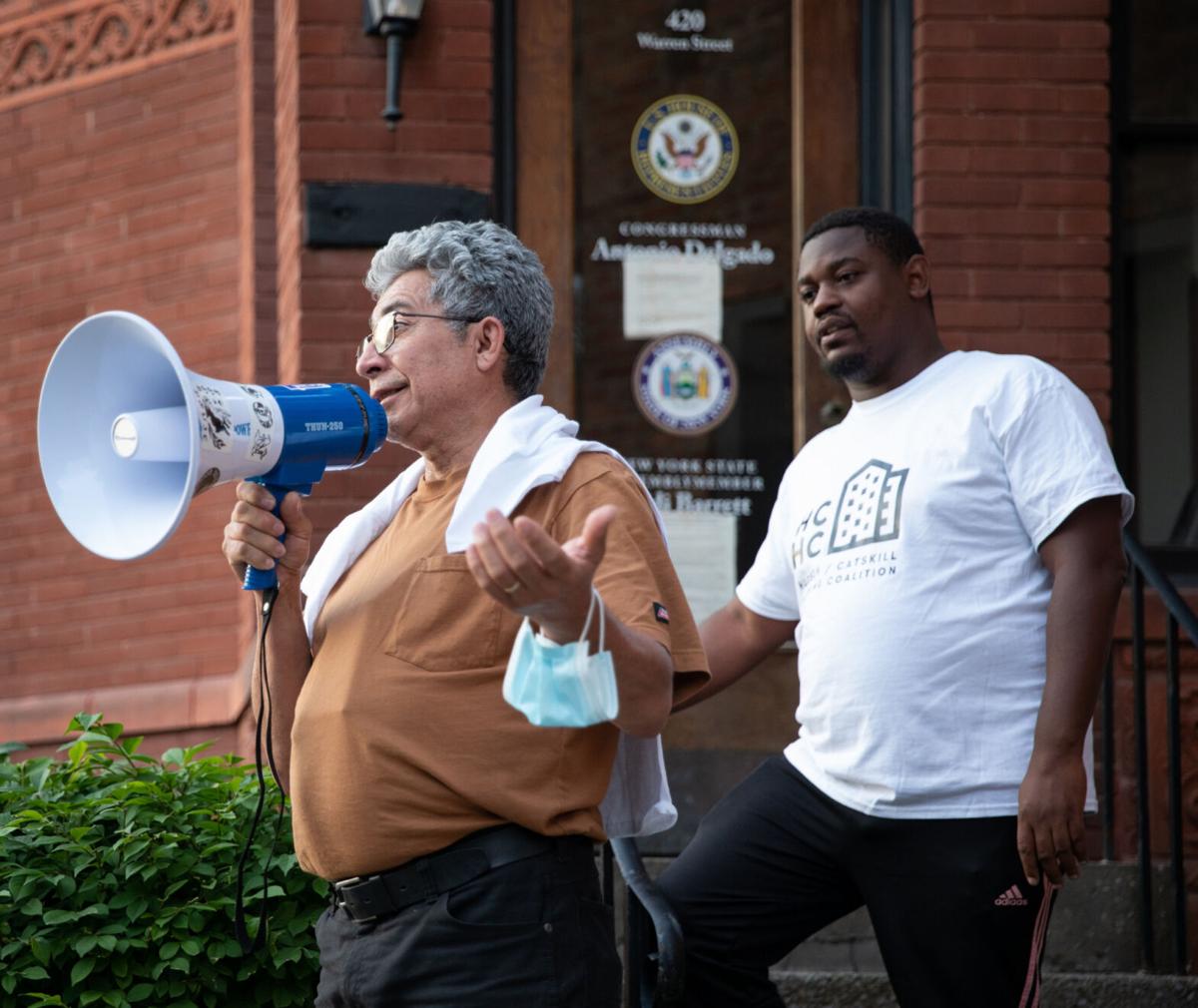 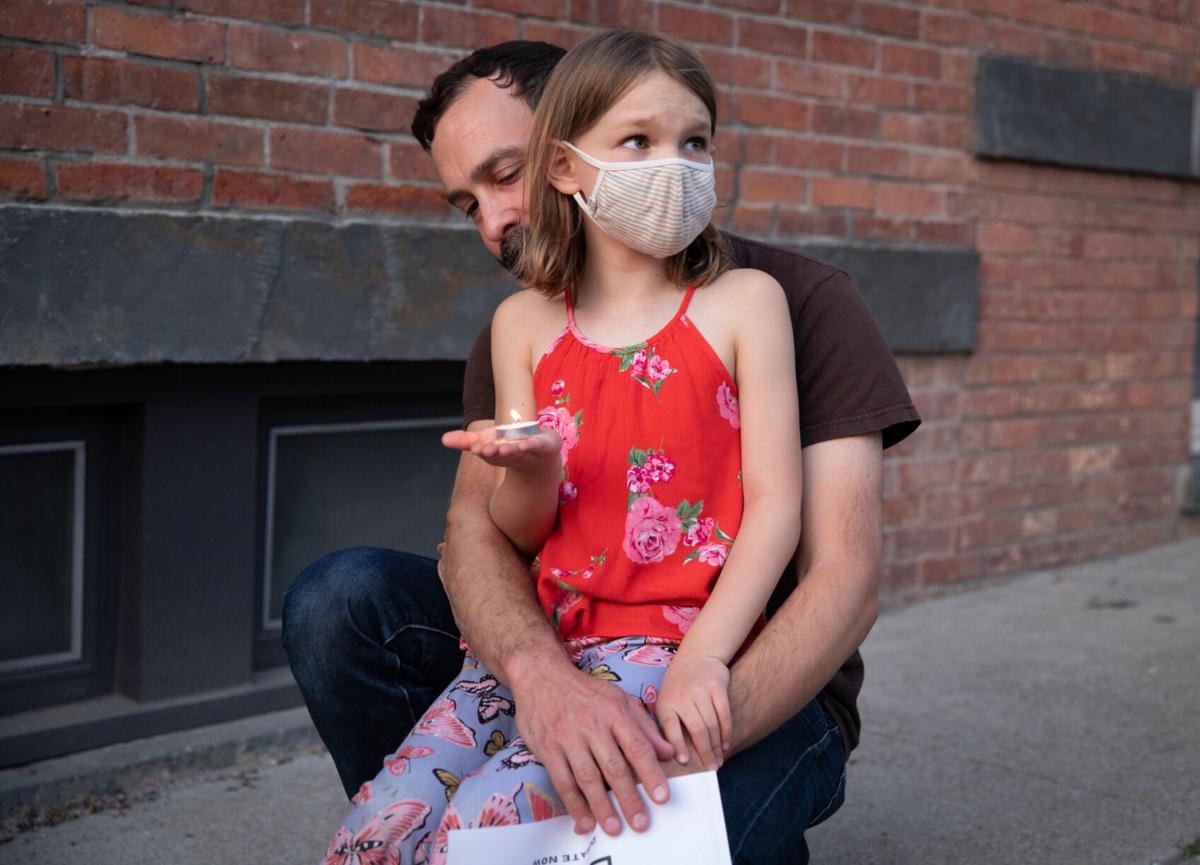 A young attendee holds a candle during the vigil. Aliya Schneider/Columbia-Greene Media 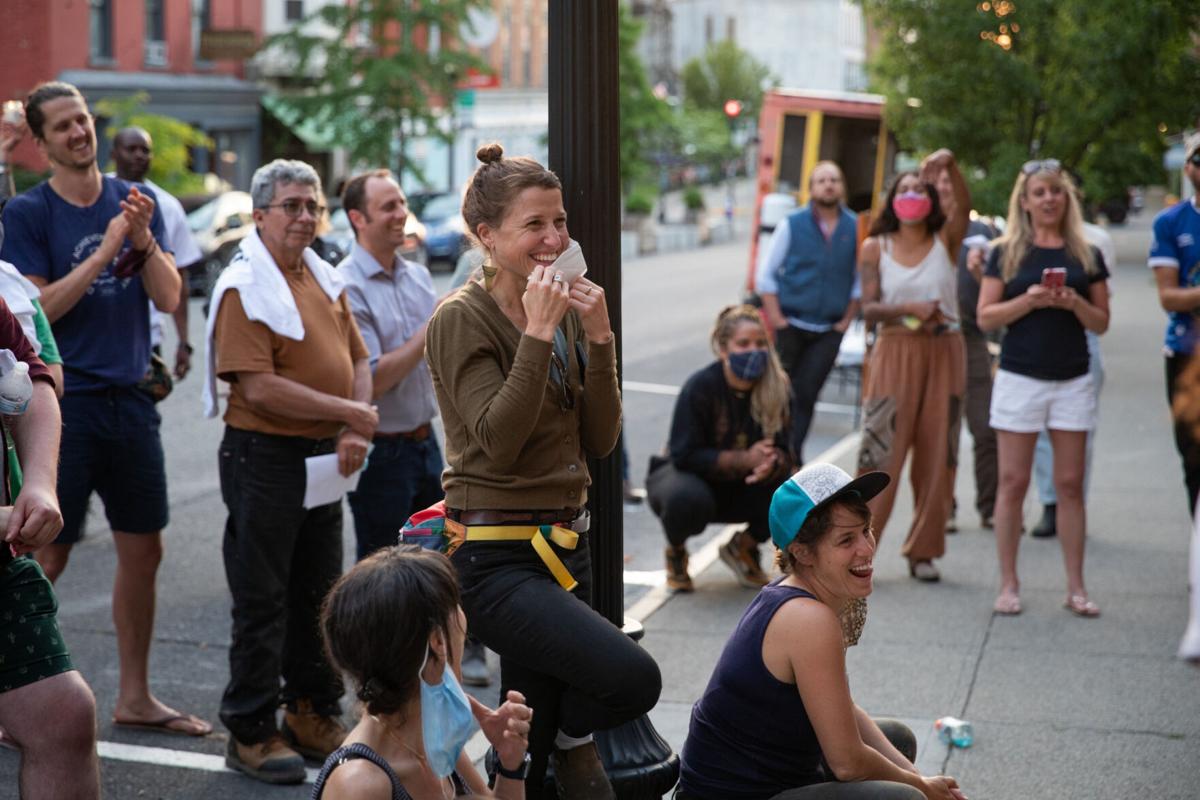 Members of the crowd laugh at a speaker’s joke. Aliya Schneider/Columbia-Greene Media 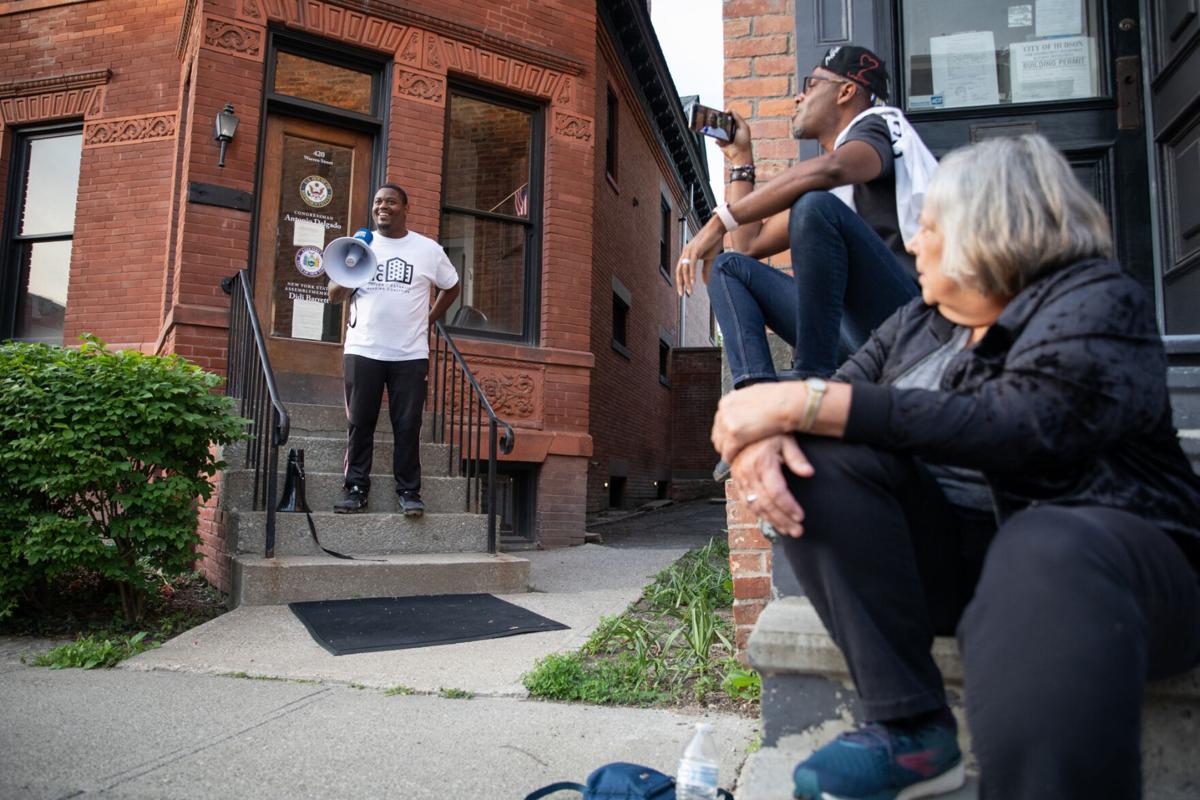 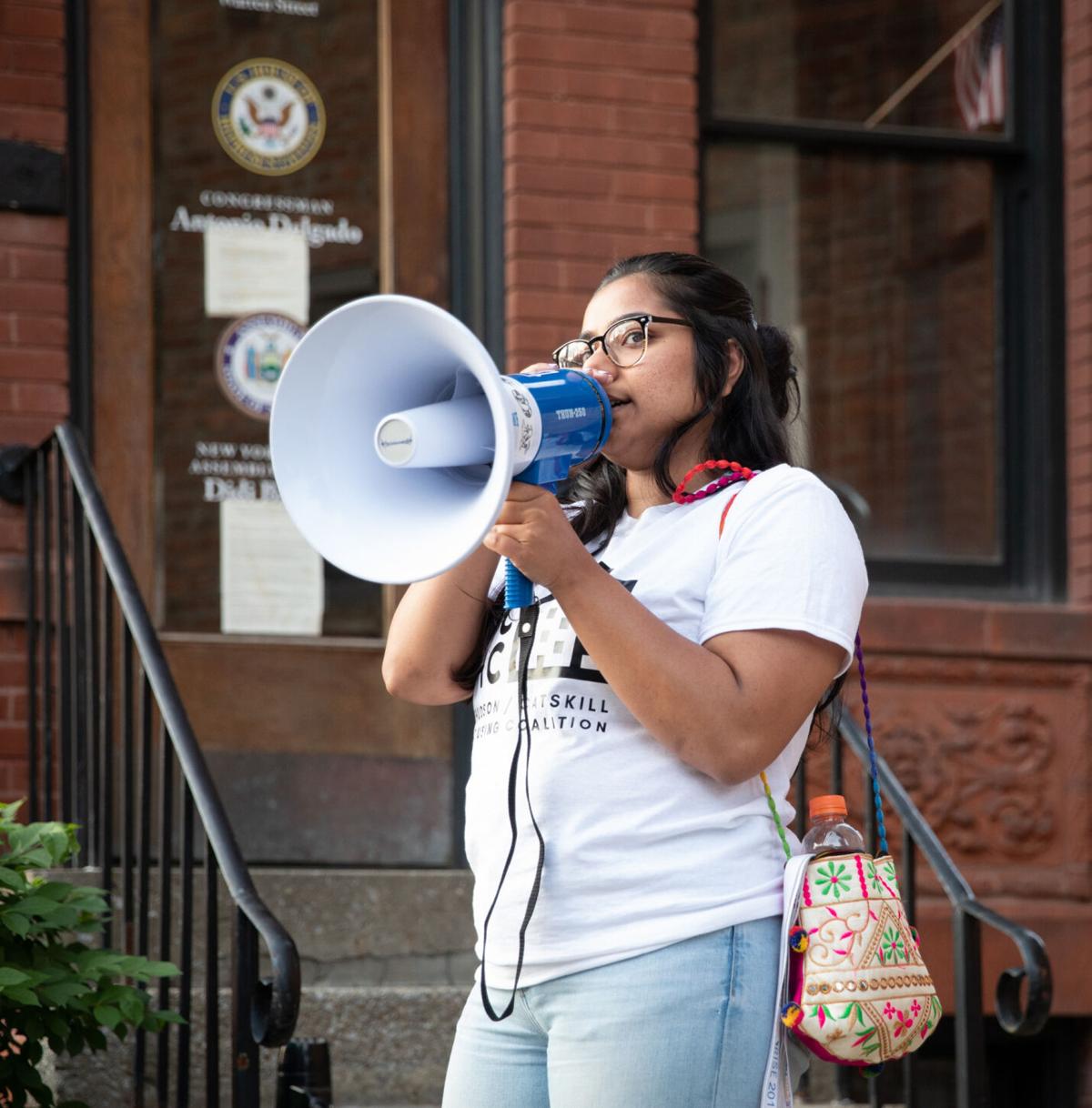 A young attendee holds a candle during the vigil. Aliya Schneider/Columbia-Greene Media

Members of the crowd laugh at a speaker’s joke. Aliya Schneider/Columbia-Greene Media

HUDSON — The Hudson-Catskill Housing Coalition hosted a speak-out and vigil to highlight housing displacement in front of 420 Warren St. Tuesday evening to celebrate its one-year anniversary.

The protest in April targeted Barrett, calling on her to vote in favor of the housing moratorium extension. Barrett was not present at the protest but her employees said they would pass the protesters’ messages on.

The moratorium was extended on May 3 until Aug. 31, but Barrett voted against the measure on May 2, which protesters criticized Tuesday.

Claire Cousin, Hudson 1st Ward Supervisor candidate, Hudson Housing Authority Vice Chairman and HCHC President, said Barrett voted against her, saying she did not have a great job, is now unemployed, has three children and is constantly at risk of losing housing.

“She voted against me,” Cousin said of Barrett. “And she voted against your neighbor who is not making rent and we have to hold them accountable and by doing that we have to get elected and get in their faces and tell them how to do their job because they don’t deserve their salary.”

Barrett said in a statement Wednesday that she voted for the eviction moratorium last winter and her vote against the extension was in response to the concerns of her constituents who are small landlords. Many small local landlords rent a room in their home to make ends meet and have not received rent payments for over a year, she said.

“Throughout the COVID-19 pandemic, my office and I have worked with many hundreds of constituents — financially stressed tenants, small landlords and small business owners — to get them immediate, tangible financial assistance to keep them in their homes,” she said. “I voted for the eviction moratorium last winter, as well as the $2.4 billion New York State Emergency Rental Assistance Program included in this year’s state budget, and co-sponsored an additional bill to expand eligibility, so that more of our neighbors can access this important program that opened up yesterday for applications.”

Cross spoke about his mother telling him about displacement beginning in Hudson, which is still happening, he said.

“One of the things she talked about, which was the first iteration of displacement for folks of color, was when urban renewal came to town,” he said. “She talked about her parents owning a bar and restaurant and at the end of the process they were living in Bliss Towers (public housing in Hudson) and their white neighbors were living on Joslen Boulevard and the boulevards and stuff, and not quite understanding how that happened.”

Hudson is in its fourth iteration of displacement, Cross said. Many people he knows who used to live on Warren Street could no longer afford to live in Hudson and moved to Albany. Visiting Albany is like a family reunion, he joked.

“I don’t know when you all came to town,” Cross said. “I don’t know if you got to meet some of the beautiful souls that I did. But I do know that I want Hudson to be a place where if people want to live here, they can. Period.”

The issues impacting people from Hudson are intersectional, Thomas Kearney, Capital Region organizer for Release Aging People in Prison, of Catskill, said. Mass incarceration, targeted policing of Black and brown people and housing displacement are tied together and are part of a planned effort since 1492 when Christopher Columbus arrived, he said. While people are being displaced from Hudson, antique shops and boutiques are coming in, he said, calling it unconscionable.

“They didn’t just think of this yesterday,” Kearney said. “They did not just come up with this plan. Okay, you can’t pay your rent, now you got to get out. And who comes in? Oh look, an antique shop, a dress shop where I can buy a prom dress for $1,700, if they accept food stamps ... This is unbelievable. It’s unconscionable. And there is no possible way that we can go on in this way.”

Kearny questioned how residents are supposed to pay off months of rent at the end of the moratorium if they could not pay one month.

“There is nothing given to the landlords, so when the rent moratorium is now up you don’t just owe this much rent, you owe all the rent from whenever the rent moratorium started,” he said. “How much does that add up? Six, seven hundred- Oh, I’m sorry, this is Warren Street, nine, 12, $1,500 a month, for how many months?”

Hudson-Catskill Housing Coalition Lead Organizer Farzana Moshi spoke about her efforts to organize a protest against sexual assault last year. The purpose of these gatherings are to direct attention to the district attorney, police department and elected officials. But she hasn’t seen action in response to her efforts, she said.

“It’s like the harder you keep pushing our elected officials to do their job the further and further away they get from it,” she said.

Moshi said there is a lack of resources for Bengali people in the area even though there is a large immigrant population.

Rebecca Garrard from Citizens Action of New York praised the housing coalition for its efforts.

“Didi is definitely getting the message and I can’t wait to see what 2022 session looks like. White moderate racist elected officials like this are never gonna do the right thing if the community doesn’t force them to, and that hasn’t been happening, and I know HCHC is absolutely the group that’s going to make that happen,” she said.

Columbia County Sanctuary Movement founder Juan Sanchez pointed out a lack of Latinos in the crowd. He said Latinos in the county are invisible, working in the back of restaurants.

It is important to question why Latinos are not participating in community events like this one, he said. He questioned why Columbia Memorial Health and Columbia County Department of Motor Vehicles do not have translation services.

“Reflect on why the Latino people are not at this meeting, or the next meeting,” he said. “It’s very important.”

Tanya Jackson, who is organizing a local Juneteenth event, said the speak-out fell on the anniversary of the Tulsa Massacre, which she called a "state sanctioned mass murder of an entire community."

Barrett acknowledged in her statement that the housing landscape has changed considerably in the region since she was elected, and the pandemic has exacerbated rising housing prices. Hudson has been hit particularly hard, she said.

“Representing a district made up of 19 towns and the City of Hudson, as well as several villages, I have worked since I was first elected to increase awareness in our Assembly conference of housing needs and tenants rights for our upstate communities,” she said. “In just the last two years alone, I supported and voted for more than 30 bills that worked to strengthen and protect tenant’s rights. I was a co-prime sponsor of the Housing Stability and Tenant Protection Act of 2019, a landmark law that codified and strengthened many of New York State’s tenant protections. I was especially proud to spearhead the effort to include manufactured, or mobile, home owners in these important protections, as these housing options are often the only form of affordable housing in many parts of upstate New York.”

Barrett recently met with Mayor Kamal Johnson and Mayoral Aide Michael Chameides to discuss affordable housing in the city, she said. She also met with Hudson Housing Authority leadership earlier this year and are planning to do so again soon.