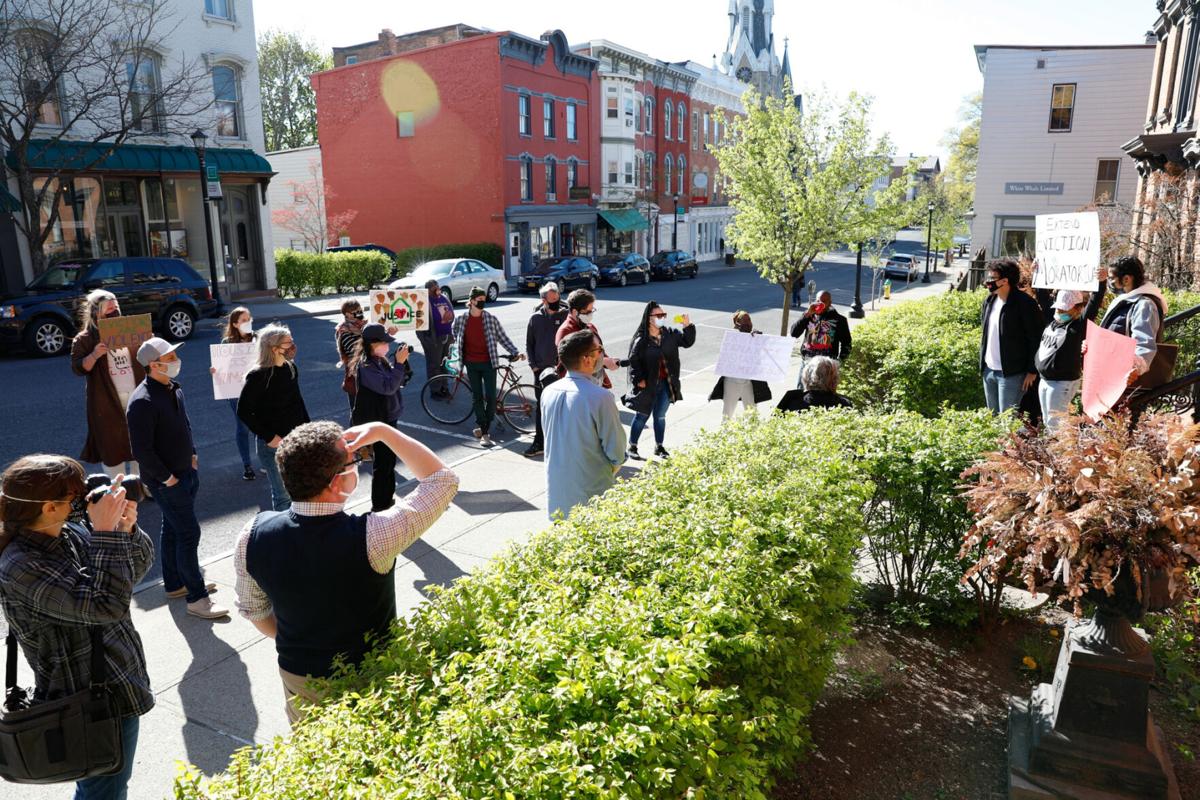 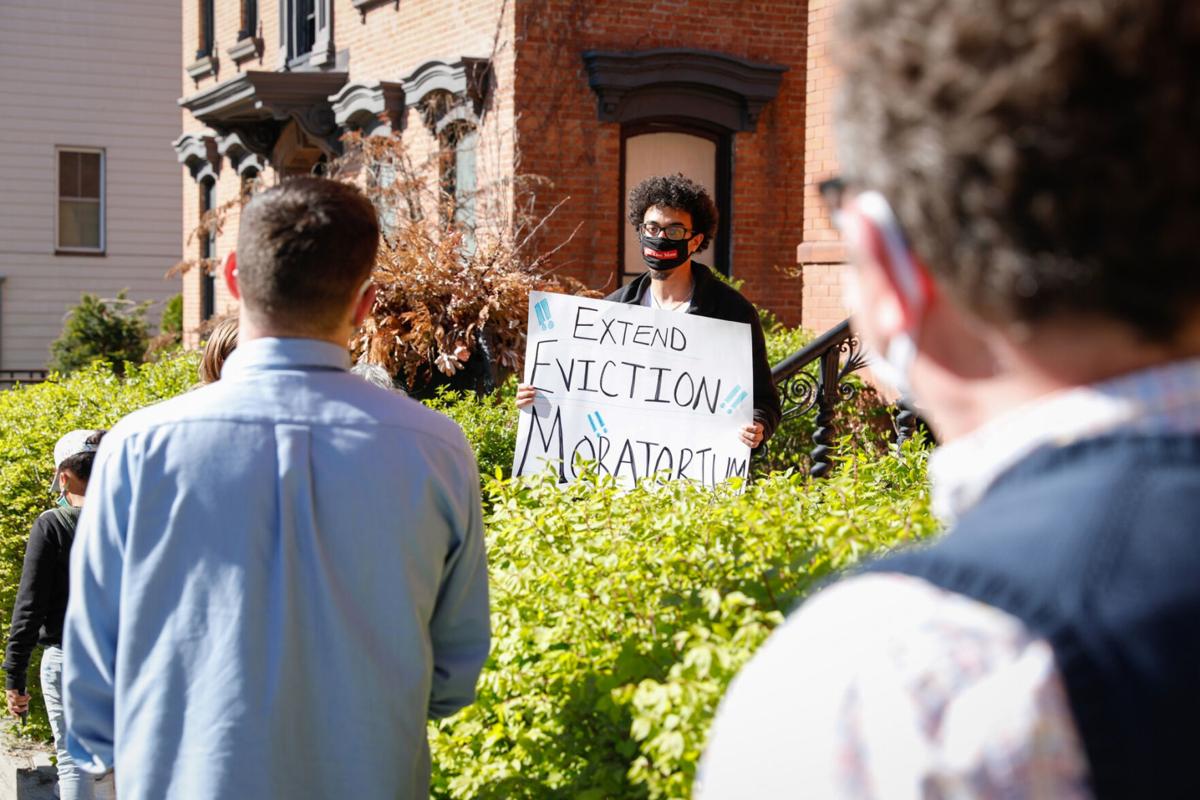 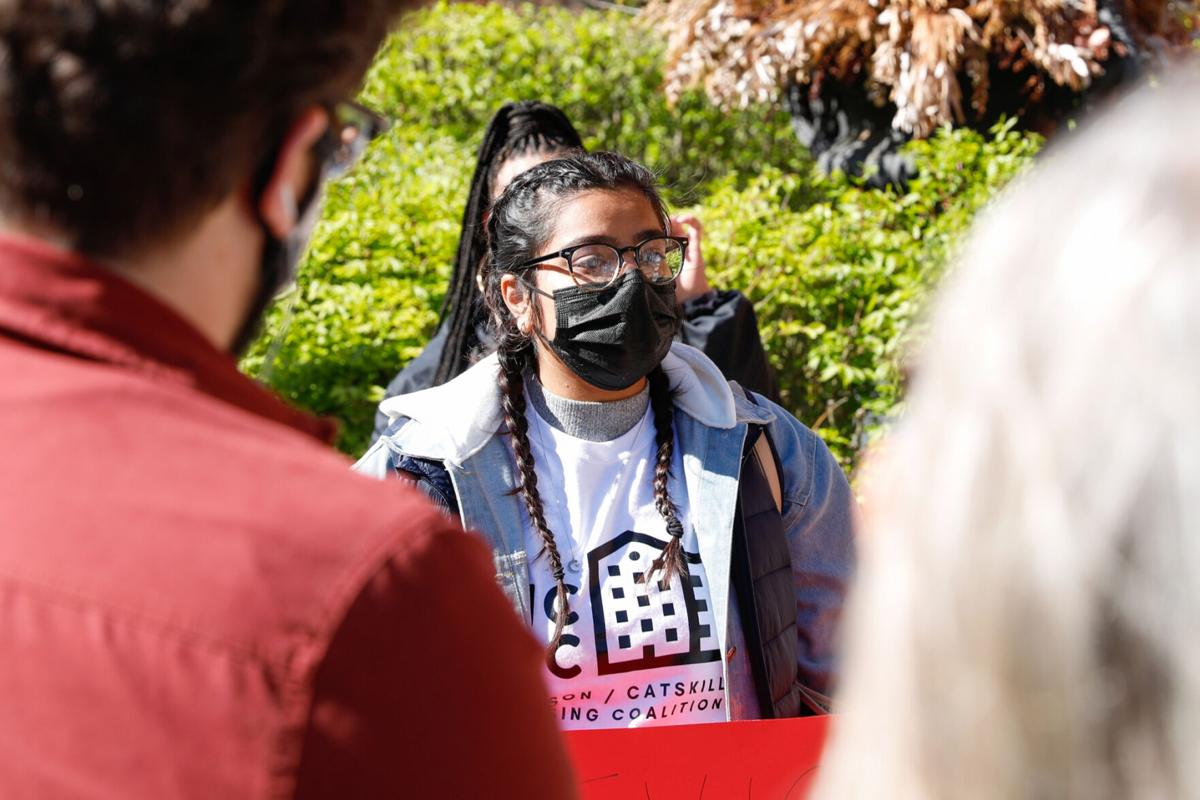 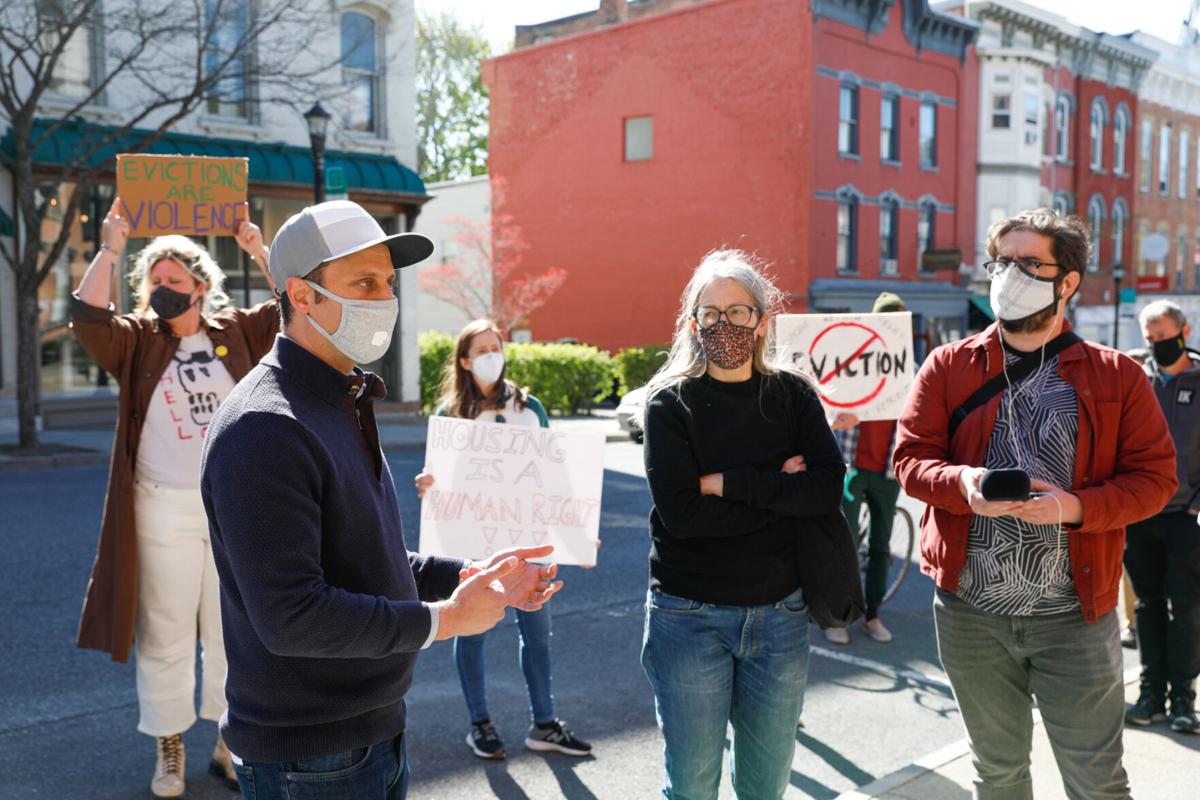 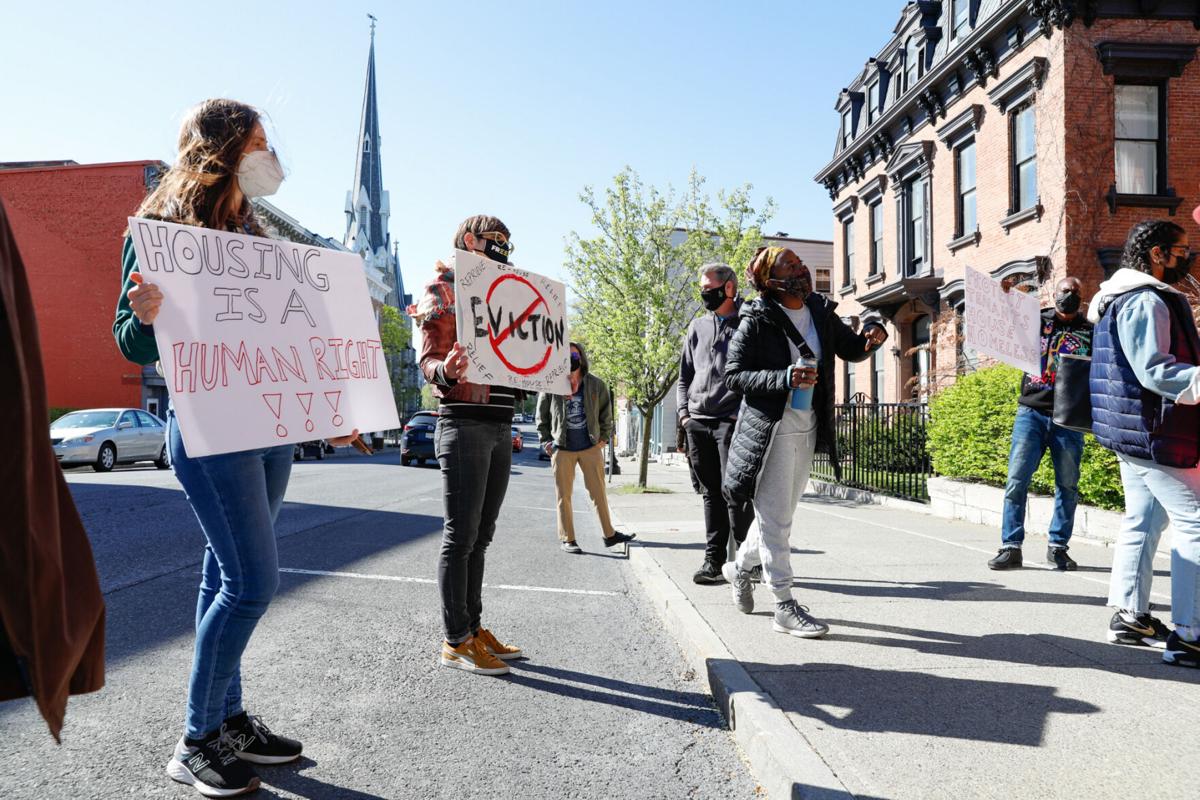 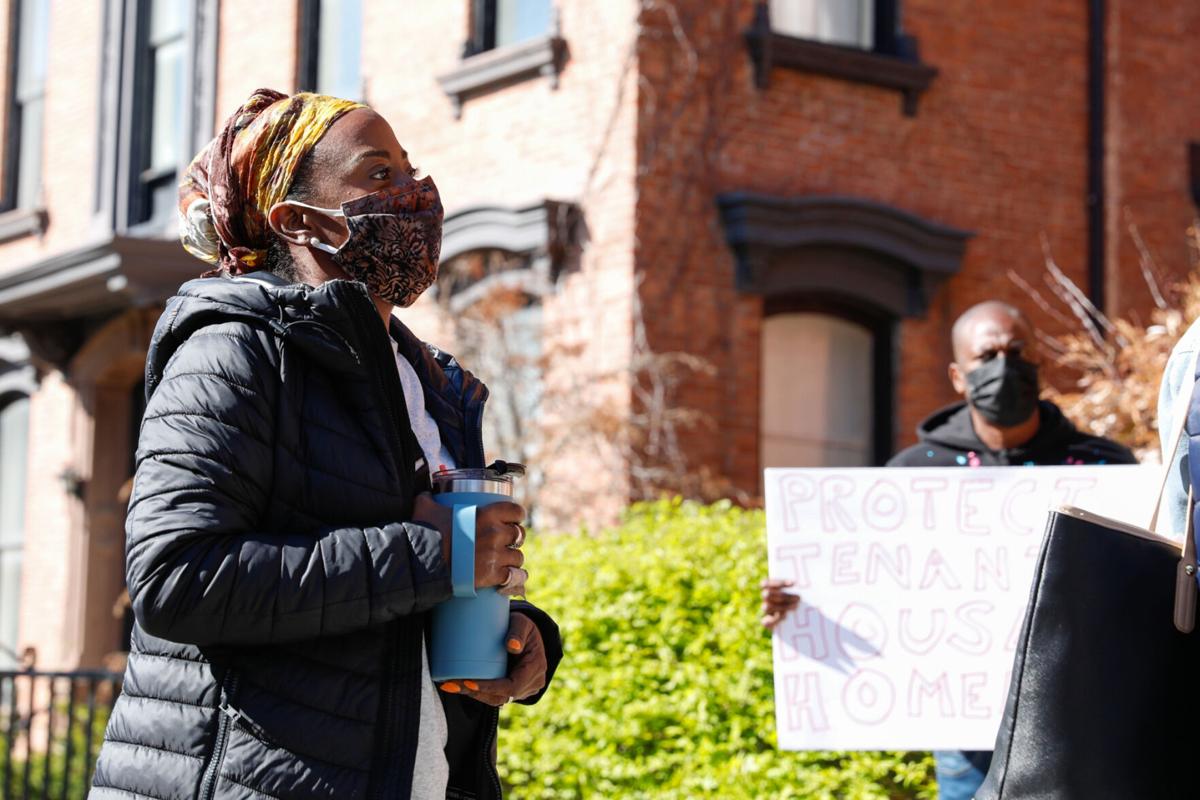 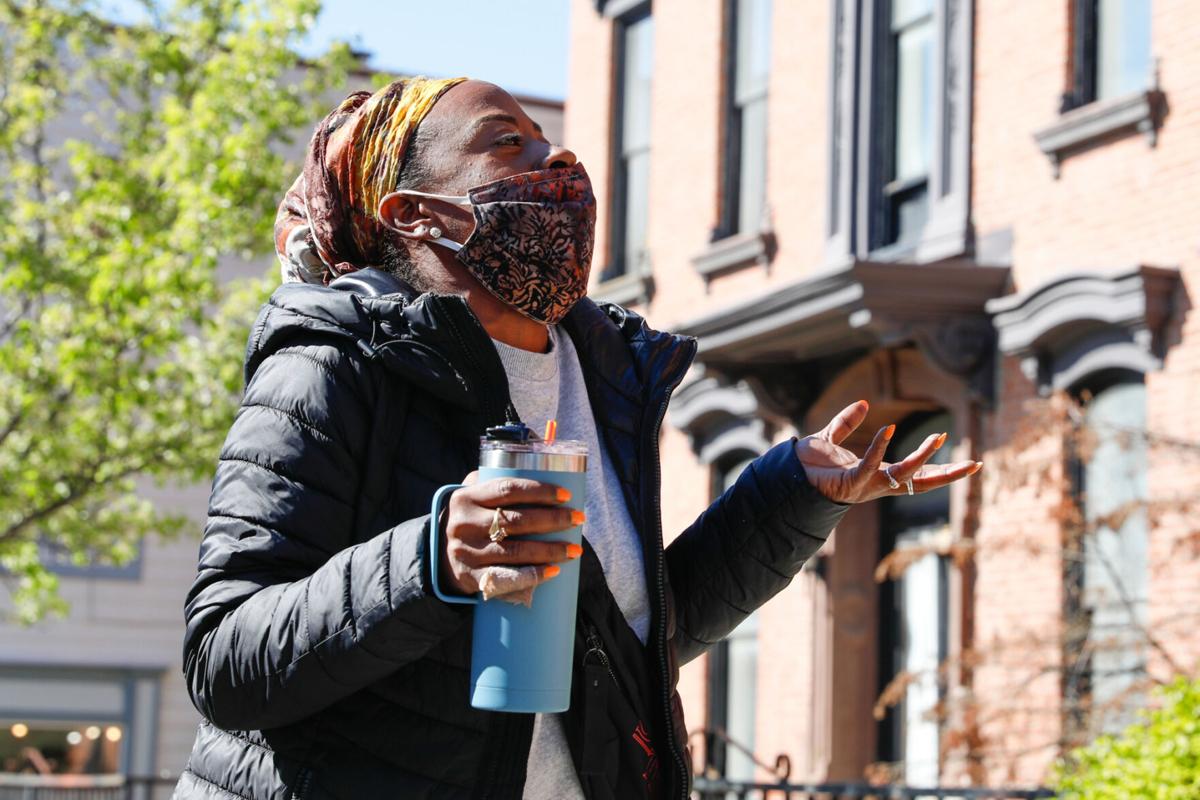 Second Ward Alderwoman and Majority Leader Tiffany Garriga said Barrett should hold a press conference on the issue before the governor makes a decision about the moratorium. 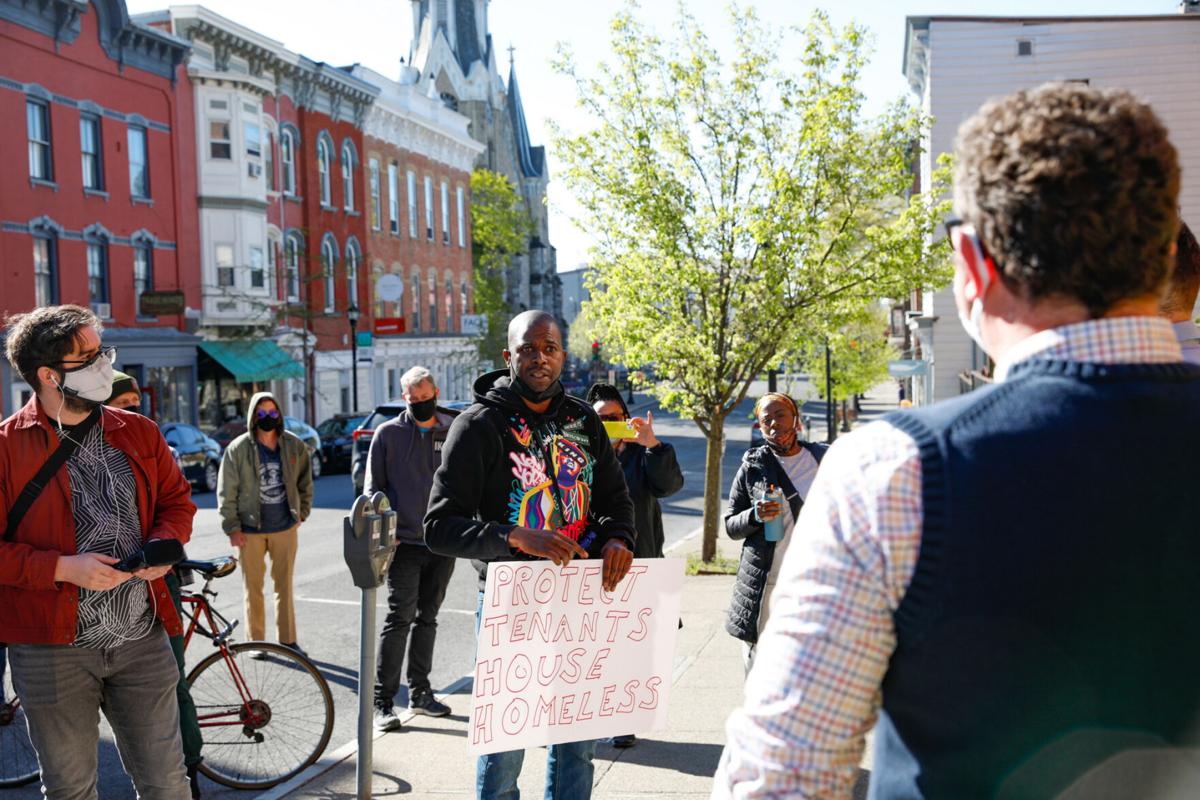 Protestor Cedric Fulton said he was not welcome in Hudson and moved to Albany. He said the issue of evictions is personal and he has spoken to Barrett about his concerns before. Aliya Schneider/Columbia-Greene Media 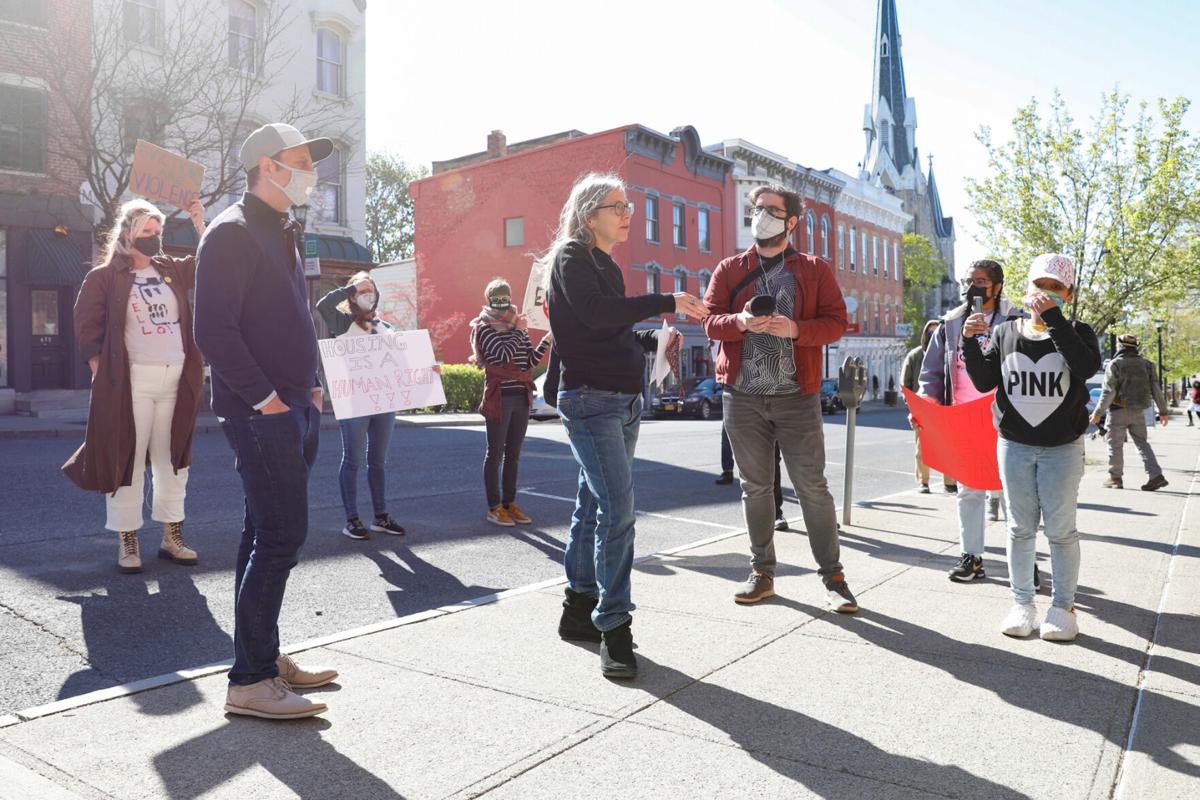 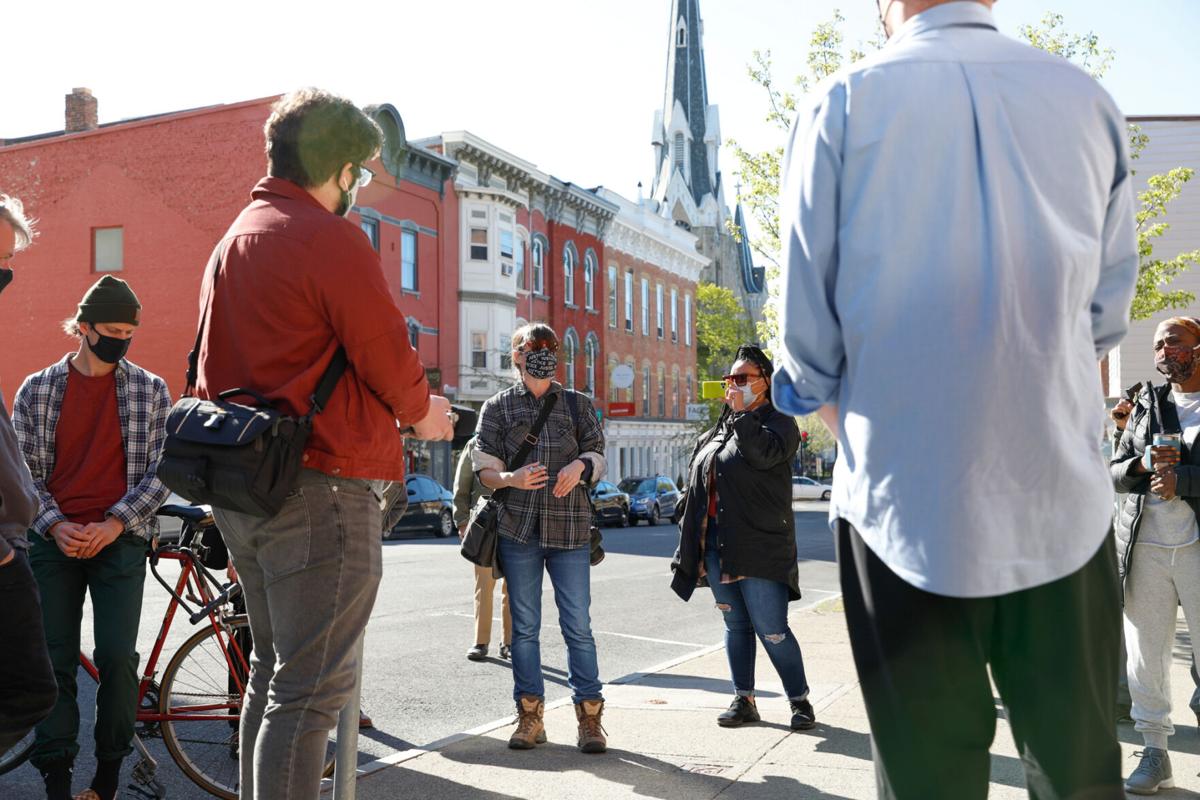 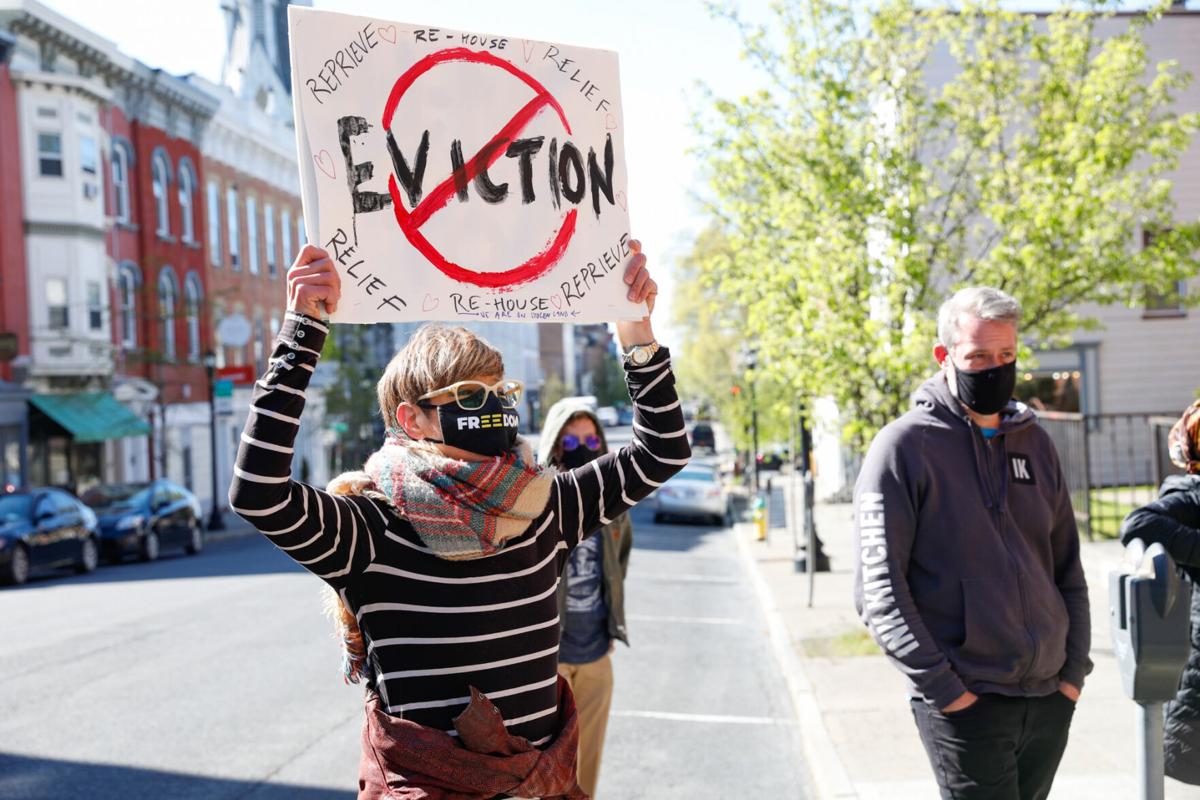 Protestor Stephanie Monseu, pictured left, said she is a gentrifier but is trying to do her part and not be part of the problem. Aliya Schneider/Columbia-Greene Media

Second Ward Alderwoman and Majority Leader Tiffany Garriga said Barrett should hold a press conference on the issue before the governor makes a decision about the moratorium.

Protestor Cedric Fulton said he was not welcome in Hudson and moved to Albany. He said the issue of evictions is personal and he has spoken to Barrett about his concerns before. Aliya Schneider/Columbia-Greene Media

Protestor Stephanie Monseu, pictured left, said she is a gentrifier but is trying to do her part and not be part of the problem. Aliya Schneider/Columbia-Greene Media

HUDSON — The Hudson-Catskill Housing Coalition held a protest in front of Assemblywoman Didi Barrett’s office at 420 Warren St. on Monday calling for an extension of the moratorium on evictions.

The organization identifies itself as a Black-led initiative that empowers public housing and low-income residents to fight for housing justice.

Over 92,000 New Yorkers are living in shelters or on the streets, according to the Hudson-Catskill Housing Coalition. The state risks significantly increasing that number on May 1, when New York’s statewide eviction moratorium will expire.

An influx of people moving to the area from big cities leads to gentrification and displacement, according to the organization.

“Housing is a human right and we must do everything we can to always protect that right, especially during a once in a lifetime pandemic,” Michael Gattine-Suarez, HCHC’s managing director, said in a statement. “We have no idea when the $2.4 billion reserved in the budget for relief will be available, and people’s lives are at stake while we ‘wait and see.’ Gov. (Andrew) Cuomo and the state Legislature must do what is necessary to protect our vulnerable residents and extend the moratorium.”

Between 20 and 25 protesters gathered Monday to voice their concerns about residents at risk of being evicted and to ask Barrett to support an extension of the eviction moratorium. Protestors came from both Hudson and Catskill.

The issue of displacement is both one triggered by the COVID-19 pandemic and one that the city has faced for years, protesters said.

Gattine-Suarez said he heard some of Barrett’s colleagues want to extend the moratorium to Aug. 31, but the moratorium should last until the end of the pandemic. “That sounds cool, but that is not enough,” he said. “This is a public health emergency and I do not want to be back here on Aug. 29 doing this over again.”

Barrett, D-106, was not in her office during the demonstration but two of her staff, Office Director Matt Hartzog and Communications Director Gunnar Wordon, came outside to hear protesters and said they would relay the messages to Barrett. Some protesters knew Wordon, saying he is from Columbia County.

The city’s housing crisis has been reducing the population of people of color in the community, Garriga said. “We see our neighbors disappearing,” she said.

Garriga criticized Barrett for not sending a message on to the protesters even though her staff said she knew they were coming.

“We don’t even have a message from our elected officials, we have a human tape recorder,” Garriga said.

Garriga invited people passing by to join the protest. A few drivers honked their car horns and raised thumbs up in support of the protest as they passed.

Chameides said the county has hundreds of thousands of dollars set aside for COVID-19 relief for housing but people cannot access the funds during the moratorium. Those funds should be unlocked before the moratorium ends, he said.

“Why would we design the system like that?” Chameides said to Barrett’s employees. “This is our system, that we’re designing.”

Various protesters shared the sentiment that their points are not their feelings, but facts.

Chameides said while the county has seen huge economic growth, poverty numbers have increased. The pandemic has drastically accelerated this problem.

Employment rates have significantly dropped for the bottom third income bracket in the county but the middle and upper brackets have stayed the same, he said.

The moratorium is a necessary bandaid while long term solutions are found to address housing stability. Chameides said the issue should be on all elected officials radars.

Protestors shared the sentiment that their frustration should not come as a surprise because housing issues in the area are not new.

Gattine-Suarez said the protest should not come as a surprise because the issue has been ongoing. His nine year old daughter should not have to switch schools because he can not live in Hudson anymore, he said. “The time for listening has been for the last year and a half,” he said, saying it is time for action.

The end of the moratorium mixed with the influx of new residents can only result in people being kicked out of their homes, Farzana Moshi, of Hudson Catskill Housing Coaltiion, said to the crowd. Moshi said politicians can not just focus on Warren Street and should focus more on the city’s residents and less on the city being a “tourist trap.”

Protester Stephanie Monseu emphasized the trauma displacement causes children. She said families end up forced into overcrowded shelters that are not COVID-19 safe. “That line of trauma lasts,” she said. “That kind of trauma burns itself into human hearts.”

People want Barrett to be an advocate for them, protestor Cedric Fulton said. He said he met with her in the past and she made promises that did not come true. “We don’t need steps anymore, we need leaps from our leaders,” he said.

Fulton said Hudson locals have pride and would back Barrett if she stands up for them. “We would love to have a champion,” he said.

Monseu said it should not take a pandemic to draw light to the issue of housing. “We shouldn’t be standing on the edge of five days to fix a problem,” she said. “It has been a slow bleed. ... We need some action on systemic change too, before Covid, after Covid, all the way through Covid.”

Protestor Mercedes Brantley said people are in a state of emergency. “People are still fighting every day and we need her (Barrett) to fight for all of us,” she said.

Garriga said rent owed should be cancelled after the moratorium. Gattine-Suarez agreed, saying people, not businesses, should be bailed out.

Hartzog suggested protestors also email and call Barrett’s office with their concerns. Protestors responded they have been showing up and contacting the office.

When Garriga said she has contacted the office and Hartzog said he has not noticed any emails from her, protestor Cedric Fulton came to Garriga’s defense, saying Hartzog, as a white man, should not question a Black woman fighting for liberation. Hartzog and Garriga ended up talking over one another. Hartzog said it was not his intention to insult Garriga.

Protestor Isabelle Legare said Barrett should go out of her way to speak with community groups in multi-pronged ways.

Moshi said the group wants to hear from Barrett by 11:59 p.m. Tuesday. She said there was a similar march last summer when the pandemic started. “Why are we here again, barely 12 months later?”

Garriga suggested Wordon call Barrett and put the protestors on speaker and he said he would not do that but will speak with anyone who wants to and will relay the messages to Barrett.

Monseu called Barrett on Facebook Messenger and left a message saying, “Save Hudson’s families. We voted for you!”