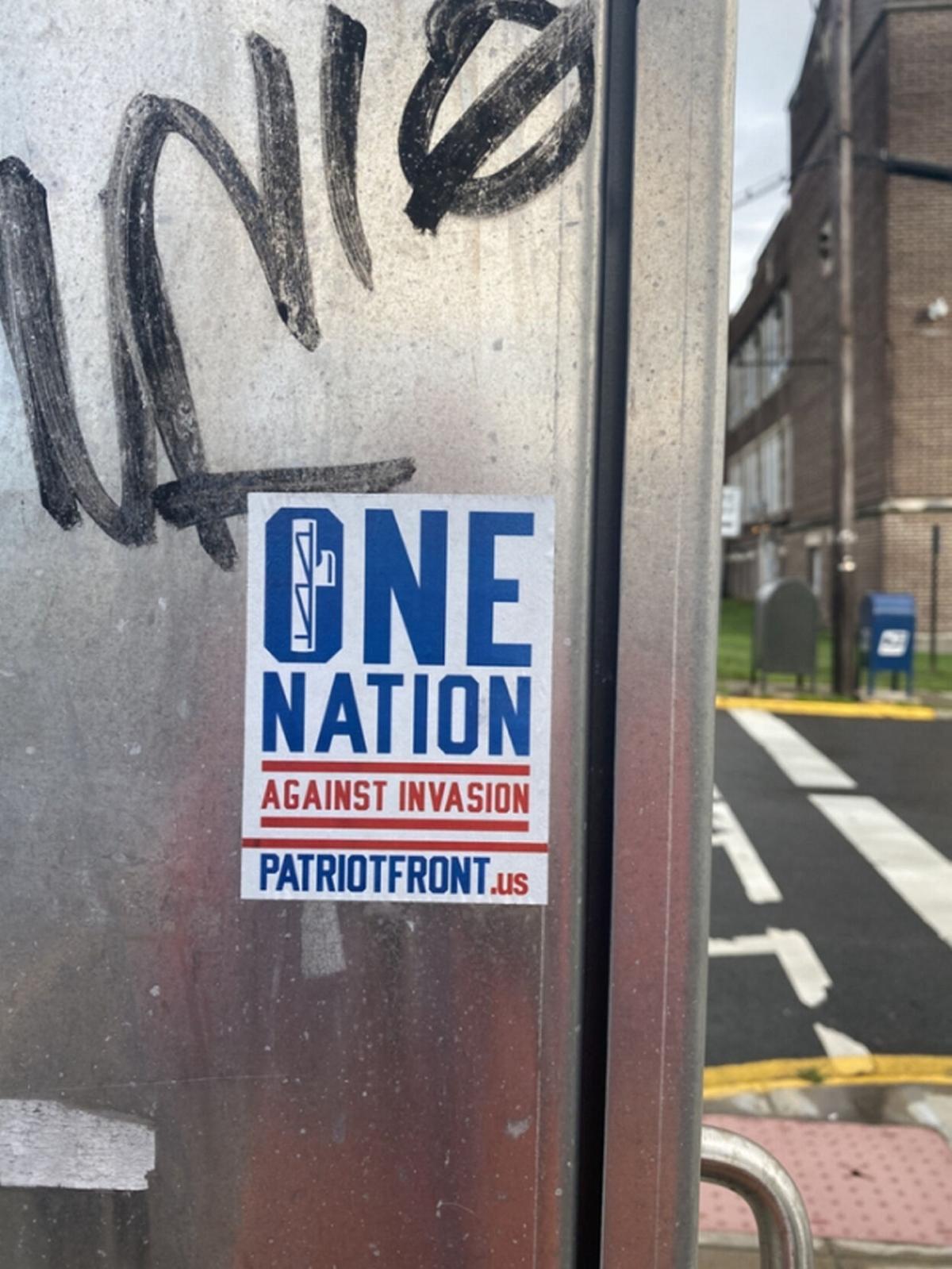 A Patriot Front Sticker was found across from 401 State Street in Hudson. Photo contributed by Hate Watch Report 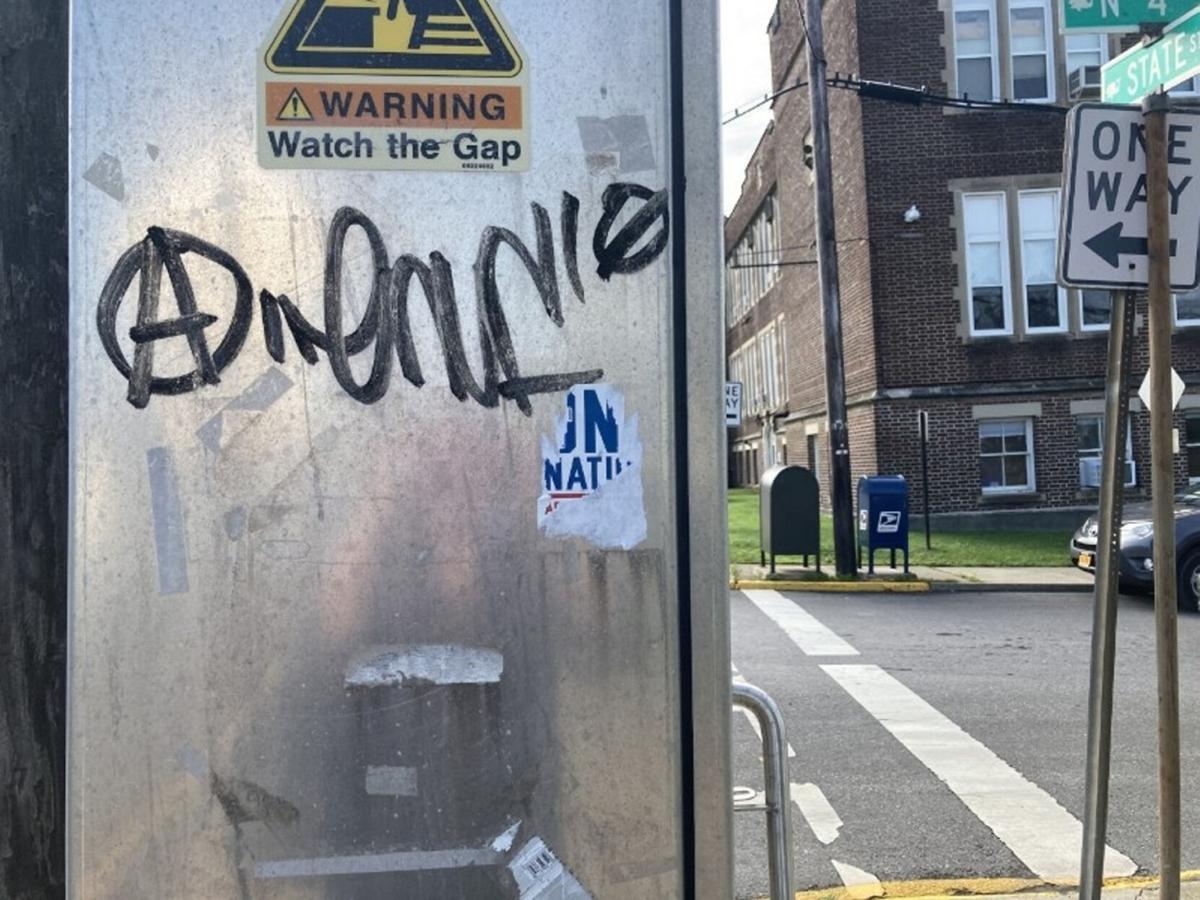 The remnants of a Patriot Front sticker found in Hudson. Natasha Vaughn/Columbia-Greene Media

A Patriot Front Sticker was found across from 401 State Street in Hudson. Photo contributed by Hate Watch Report

The remnants of a Patriot Front sticker found in Hudson. Natasha Vaughn/Columbia-Greene Media

HUDSON — A Patriot Front sticker was found across from the Columbia County Office Building in Hudson.

Patriot Front is a white supremacist group known for spreading its message through distribution of banners, fliers, posters and stickers, according to the Anti-Defamation League.

Rick Werwaiss was on his way to a meeting of the Environment Management Council on Monday when he saw the Patriot Front sticker, he said he reported the sticker to Hate Watch Report, a tool used for receiving and reporting news about hate or extremist groups and informing the public about them.

“It looked like it was relatively new, so it hadn’t been there a while,” Werwaiss said. “I took the picture of it. I took a picture of the intersection and then I peeled it off, quite honestly.”

The sticker was found near the intersection of Fourth Street and Columbia Street across from the county office building at 401 State St. in Hudson.

“I think this a big problem that we have at least one person running around trying to recruit for this group,” Werwaiss said. “That’s a scary thought.”

The Southern Poverty Law Center calls Patriot Front a white nationalist hate group. The group broke off from Vanguard America in the aftermath of the “Unite the Right” rally in Charlottesville, Virginia, in August 2017.

“People should be aware of what the messaging is,” Werwaiss said. “It’s coded. If you read what it says on that sticker it seems harmless enough at first glance, but it’s really got trigger words and it’s a coded message.”

This is the second Patriot Front sticker found in the city, Hudson Police Chief L. Edward Moore said. Another sticker was found earlier this month near the Hudson Dog Park.

“We put out orders to the officers to try to see if we could observe, check video, or on patrol see if we could see anyone actually applying these stickers,” Moore said. “It’s an ongoing order, so we haven’t arrested anybody, we haven’t charged anybody with anything, so other than just trying to identify who’s putting them around, that’s about the size of it.”

The county office building has security, Moore said, but he did not disclose any details.

“I don’t feel like this is a real thing,” Hudson Mayor Kamal Johnson said. “I think this is something somebody is doing for attention.”

“There seems to be certainly a heightened activity,” local activist Michael Richardson said. “Which indicates to me there is a small club, a small group of people, that is organizing to get this done.”

Lt. John Rivero of the Columbia County Sheriff’s Office said they had a deputy who had taken a report about some of the previous stickers in Germantown and were looking into that.

“They are being done in small batches, ones, twos, that other day maybe four,” Richardson said. “And that’s not the indication of a blitz, that’s more of an indication of somebody that resides in the community is putting them up.”

Patriot Front is active online and uses social media to promote racism, anti-Semitism and intolerance, according to the Anti-Defamation League.

“We want to think that all this alt-right behavior is happening down in Washington, D.C., or someplace else, but it’s right here in our backyard,” Richardson said. “And we need to keep our eyes open to it so that we’re aware that it’s not so far away.”