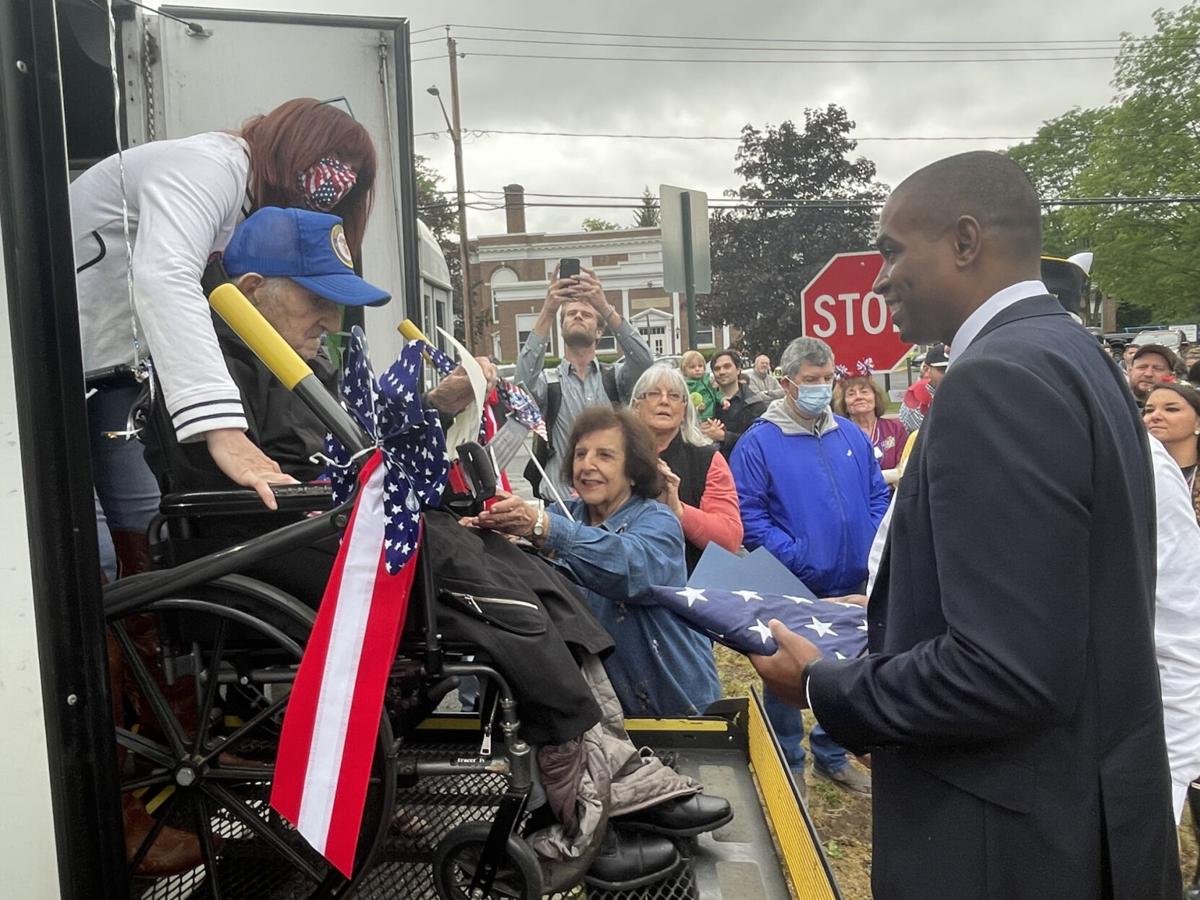 Samuel Gamello, 99, a World War II veteran from Kinderhook, was presented with a certificate during the town’s Memorial Day ceremony on Monday by U.S. Rep. Antonio Delgado, D-19, and American Legion Post 47 Cmdr. Tom Burrall to recognize Gamello’s 75 years as a legion member and his service to the nation. Kate Lisa/Johnson Newspaper Corp. 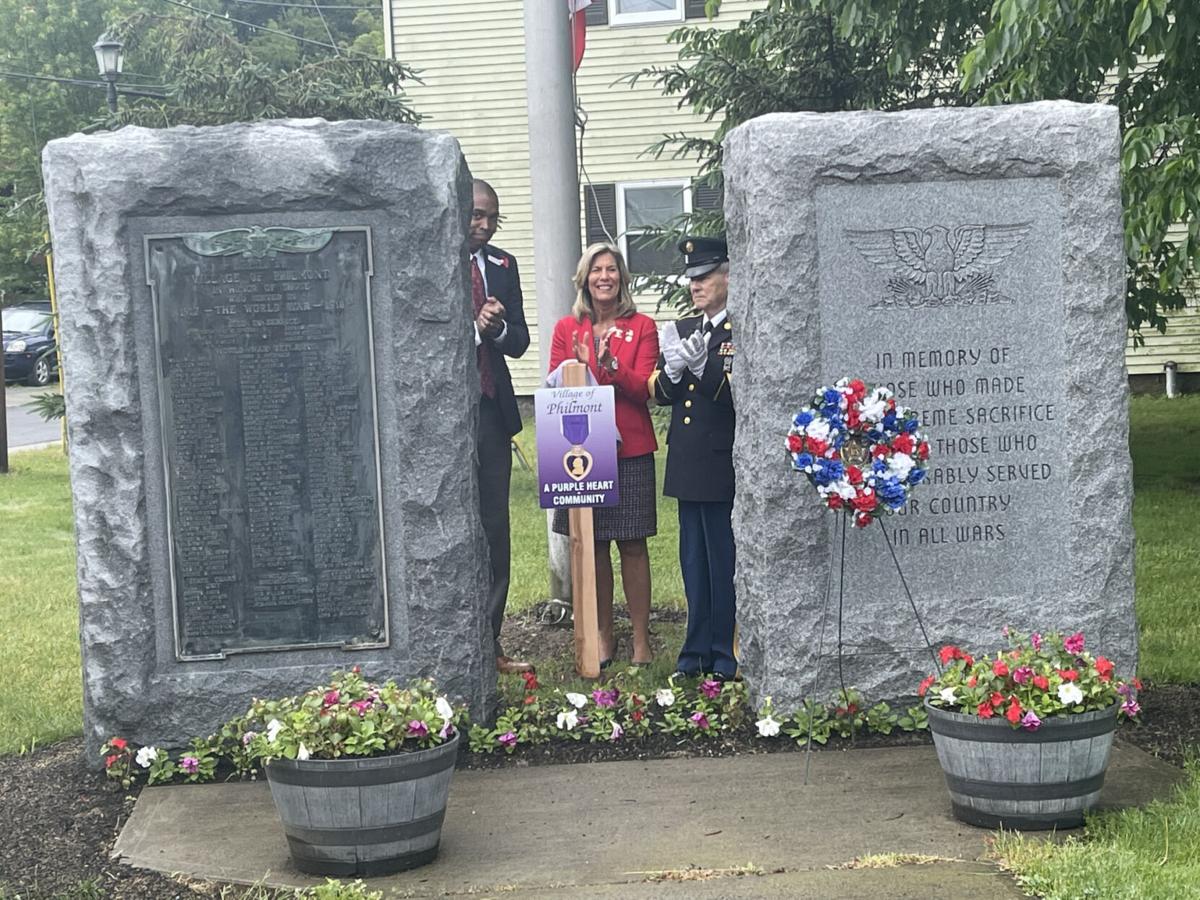 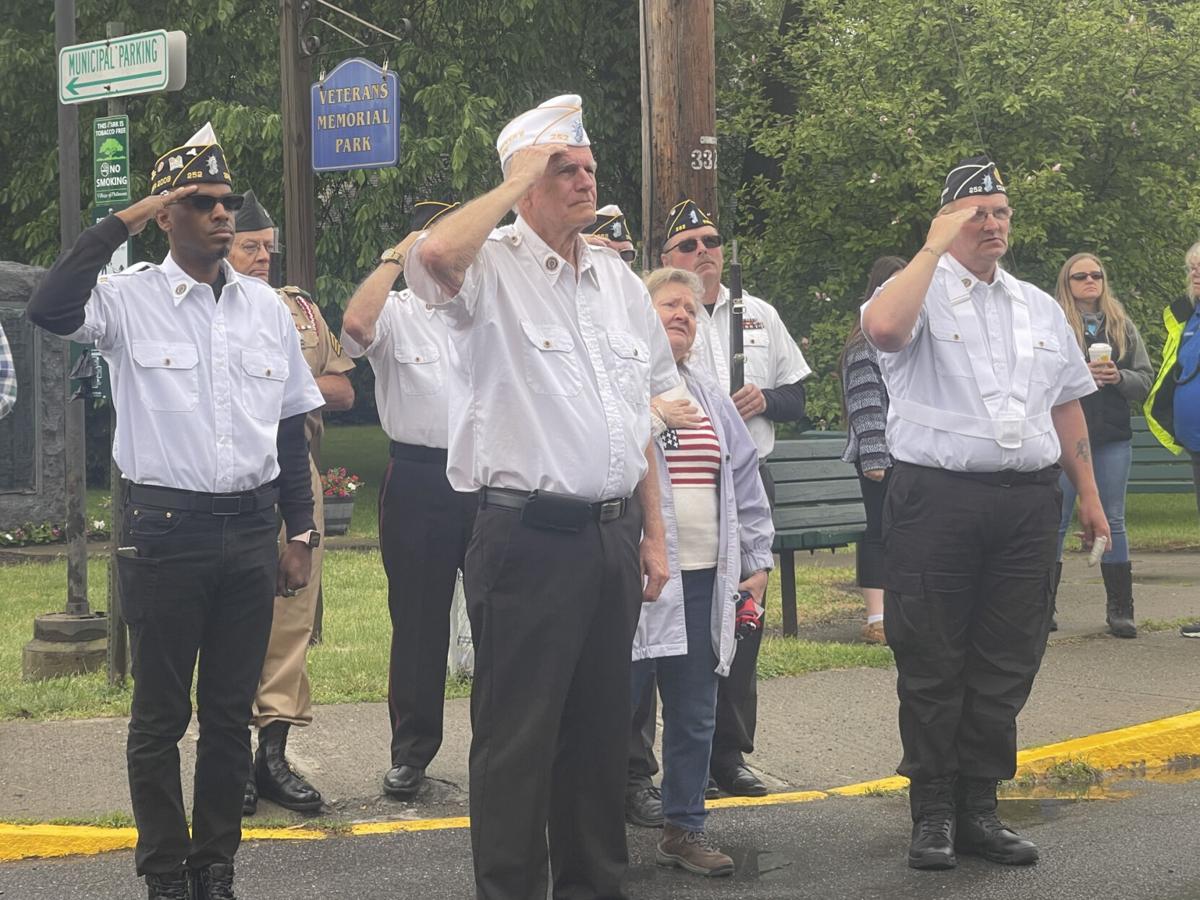 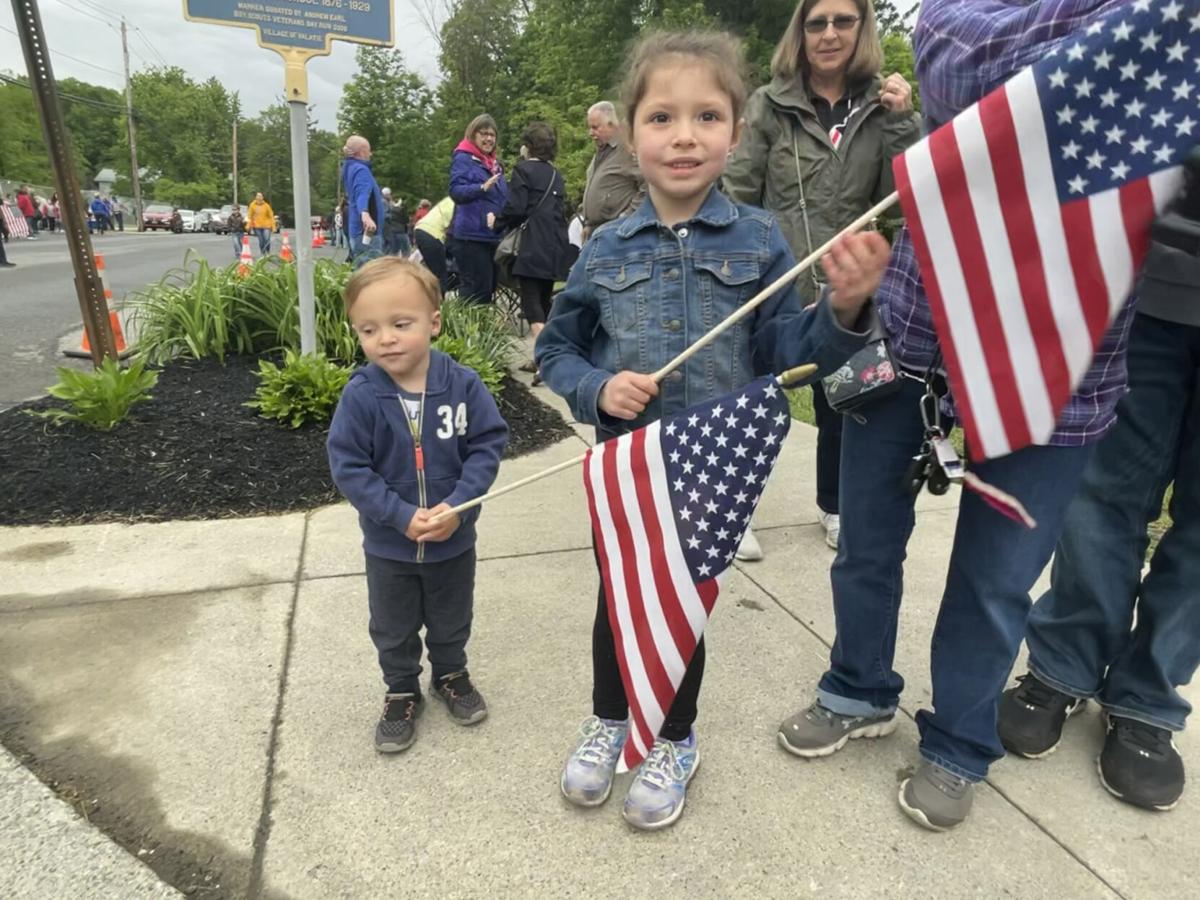 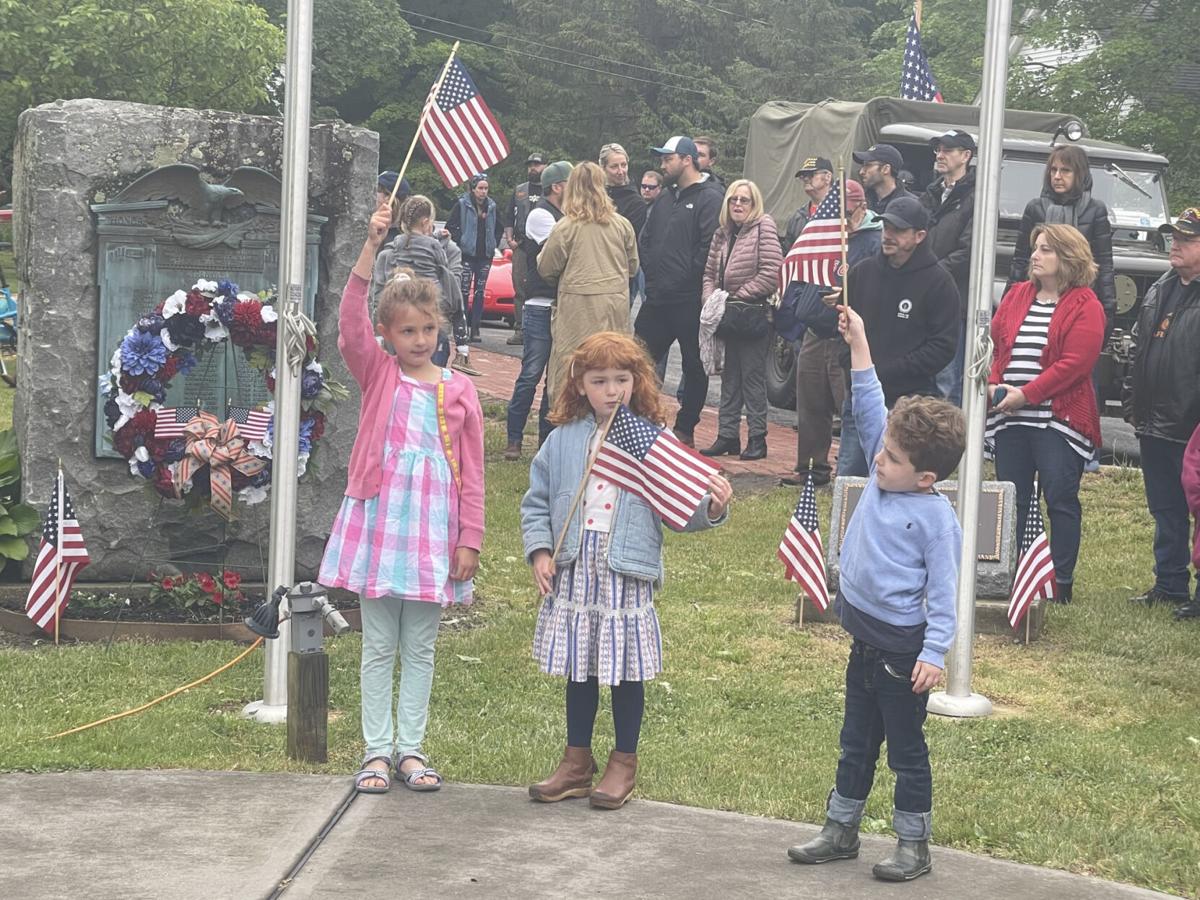 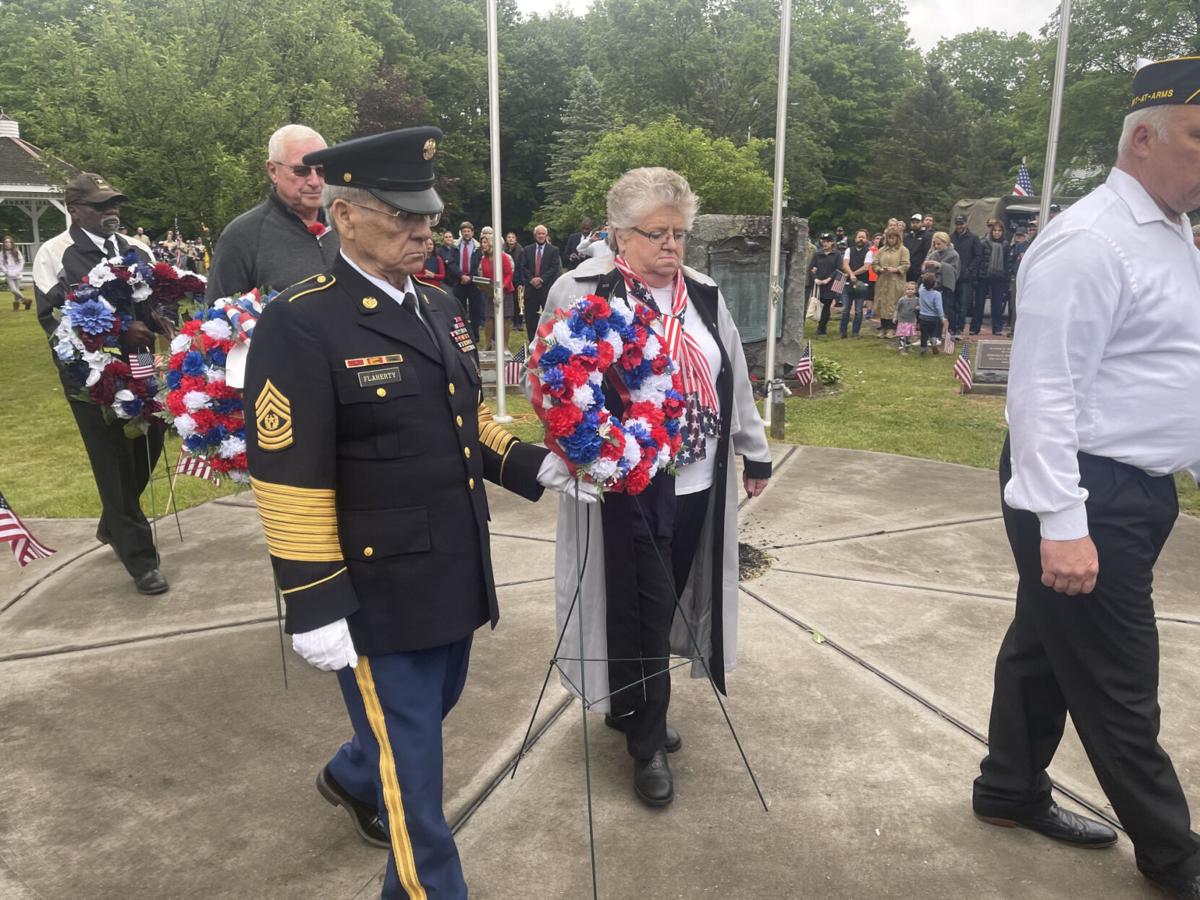 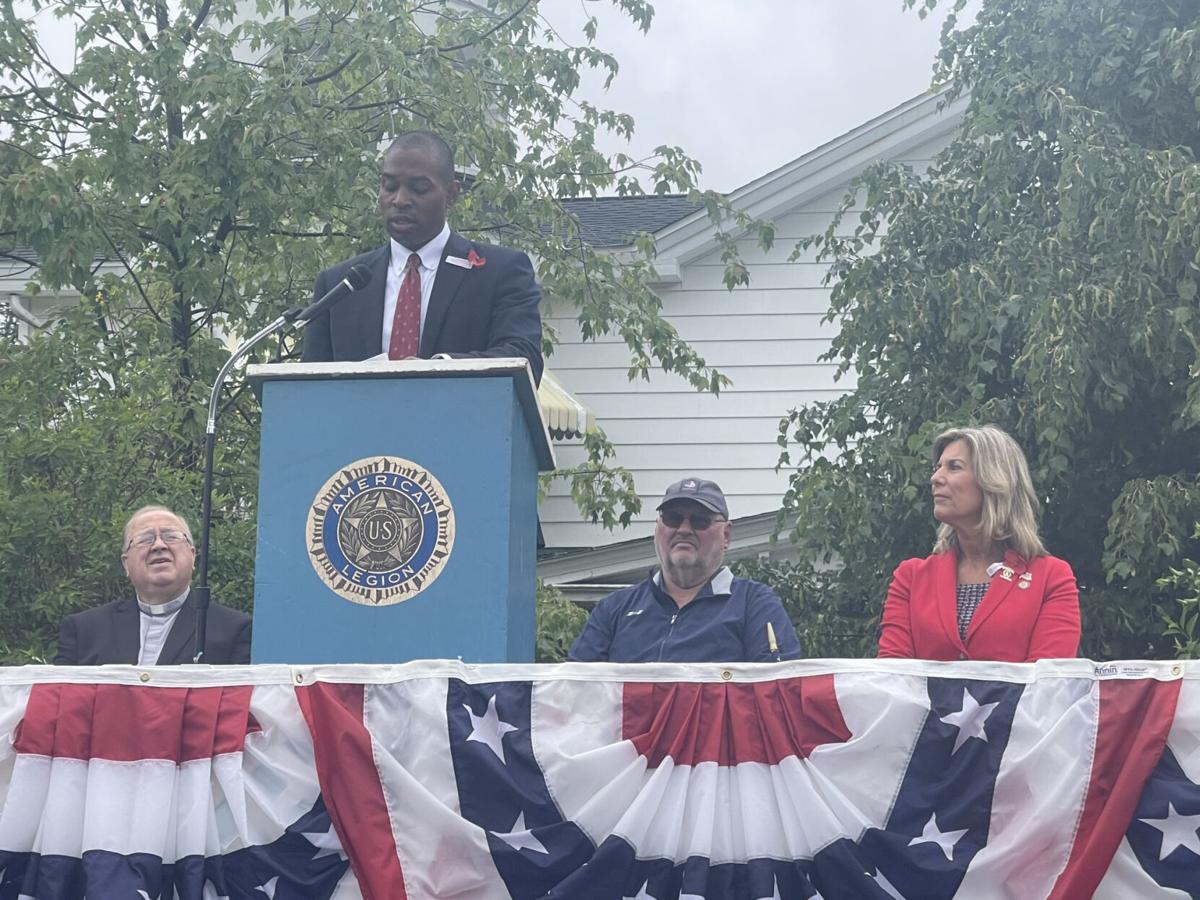 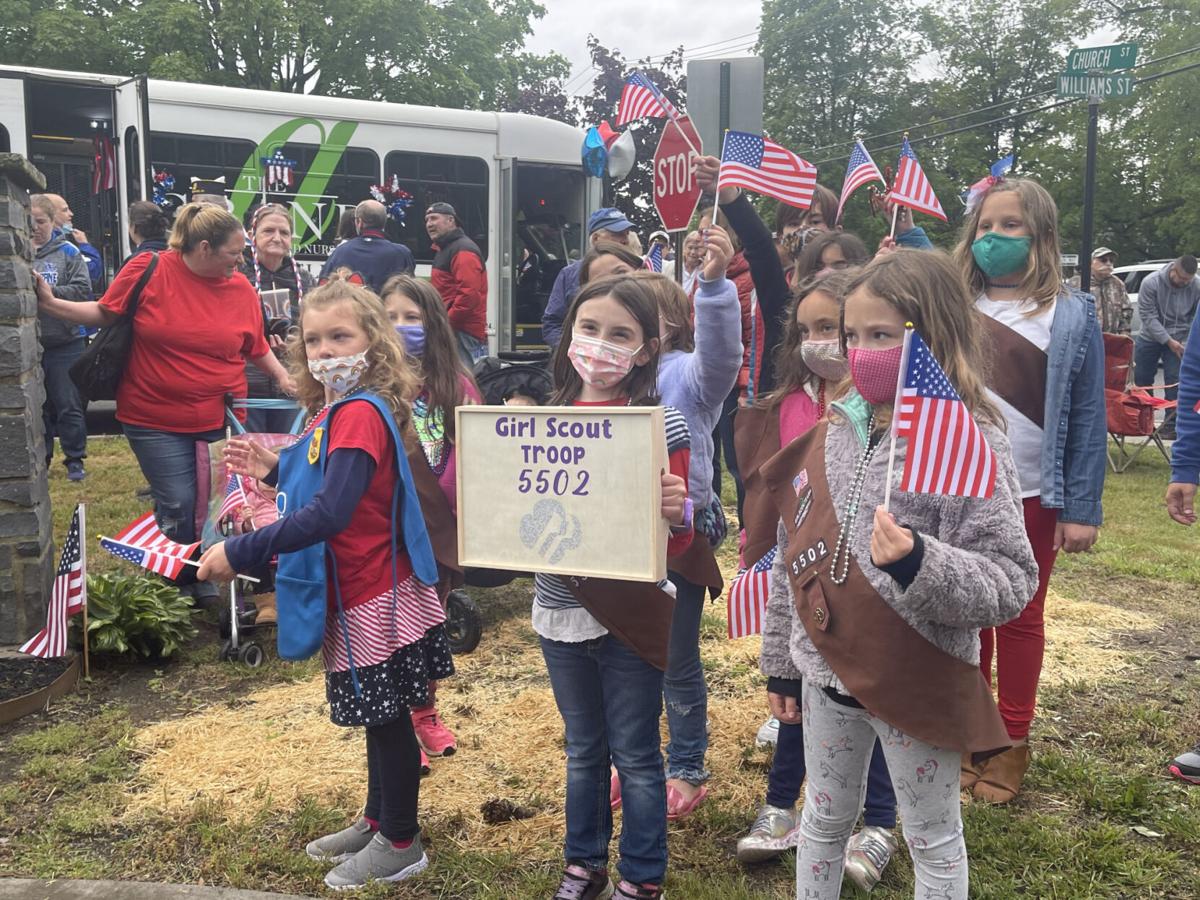 Samuel Gamello, 99, a World War II veteran from Kinderhook, was presented with a certificate during the town’s Memorial Day ceremony on Monday by U.S. Rep. Antonio Delgado, D-19, and American Legion Post 47 Cmdr. Tom Burrall to recognize Gamello’s 75 years as a legion member and his service to the nation. Kate Lisa/Johnson Newspaper Corp.

Columbia County residents ended a rainy weekend with sentiments of hope in commemorating Memorial Day and the sacrifices of those who died to preserve the nation’s freedoms.

Kinderhook and Valatie’s joint Memorial Day parade and commemoration and Philmont and Claverack’s ceremony Monday morning was filled with patriotic music, colors and speeches with heartfelt gratitude for the brave men and women who died for their country.

Hundreds of people waved American flags, smiled, waved and took time Monday to reflect on the American soldiers who gave everything for liberty.

Kinderhook’s parade and ceremony, held for Kinderhook town and village and Valatie village residents, started at Nursery Lane in Valatie at 10 a.m. and ended at Martin Glynn Square.

Ava and Logan Cotsonas, ages 4 and 1 1/2, stood with their mother, Sarah Cotsonas, on Church Street waving flags and smiling at veterans, officials and cars that passed by.

“It’s important to teach them respect and patriotism for our country,” Sarah said of bringing Ava and Logan to Monday’s parade.

“I keep telling them to keep the flag off the ground, or put your hand on your heart for the flag,” she continued. “You have to start them young.”

Samuel Gamello, a 99-year-old World War II veteran who served in the U.S. Navy, was honored by U.S. Rep. Antonio Delgado, D-19; and American Legion Post No. 47 Cmdr. Tom Burrall for remaining a member of the local post for 75 years.

Gamello, who lives at The Grand Rehabilitation and Nursing at Barnwell in Valatie, is the legion’s longest-serving member.

Delgado recognized Gamello’s service, thanking him, and said, “It’s an honor to be in your presence, sir.”

“It’s hard not to well up for me, personally, given the weight and the magnitude of the sacrifice,” the congressman said. “This profound purpose to service, no one knows this more than Mr. Gamello and the men and women who lost their lives to defend our nation.

“Our fallen heroes have embodied the preamble of our Constitution,” Delgado added. “They’ve embodied it — perfecting our union, establishing justice, ensuring domestic tranquility, providing for the common defense, promoting the general welfare and securing the blessing of liberty to ourselves and to our posterity.

“They fought to uphold the founding of our nation. Let us never forget what they died for.”

Delgado wiped a tear from his eye after handing Gamello the certificate and American flag, which flew atop the nation’s Capitol in Washington, D.C.

“Today is not about the day off, it’s not about the barbecue — it’s about them,” Kinderhook Town Supervisor Patsy Leader said of honoring all fallen soldiers, past and present. “From the town of Kinderhook, we honor you, we thank you. Enjoy the day, but don’t forget to say thank you to all of them.”

Officials and local veterans posthumously awarded several Purple Heart medals on Monday — a high-honor U.S. military decoration awarded by the president to soldiers who were wounded or died in combat created by George Washington.

Army Cpl. Clifford S. Johnson, a Korean War veteran, was recently laid to rest at Gerald B.H. Solomon Saratoga National Cemetery after he had been missing in action for more than 70 years.

Each were enrolled in the National Purple Heart Hall of Honor in New Windsor, Orange County.

“We can never forget the incredible deep debt of honor ... the timeless values of duty, honor and country,” Sen. Daphne Jordan, R-43, said during the ceremony. “Our nation is free and we are a free people because of our veterans. We stand on the shoulders of giants, and we walk in the footsteps of true heroes.”

Jordan presented the three municipalities with a proclamation from the state Senate.

The Niverville, Valatie and Kinderhook village fire companies and the Valatie Rescue Squad were among the first responders to participate in this year’s parade. New York State Police also joined the procession.

State officials unveiled a new sign in the village of Philmont to highlight its new status as a Purple Heart community — first bestowed last September — and its dedication to honoring veterans.

Officials received a congressional letter, American flag that flew atop the U.S. Capitol in Washington, D.C. and a proclamation from the state Senate recognizing Philmont as a designated Purple Heart community.

“We’re grateful to have the recipients of this medal with us,” Philmont Mayor Brian Johnson said. “The designation means our village recognizes [recipients’] sacrifices to our country. We have a number of veterans in Philmont and they should be honored as often as possible for their services.”

Claverack Town Supervisor Clifford Weigelt remarked on how uplifting it was to gather and honor the community and nation’s soldiers who died for our freedom — especially after most people were consumed with isolation or illness from the COVID-19 pandemic over the last 15 months.

“With any luck, we are beginning to see the end of the pandemic, which we have been living and dealing with for over a year now,” Weigelt said, adding Memorial Day puts the pain of the pandemic into perspective. “Far too many military families will never see their loved ones again. ...They can no longer call them to share exciting news or tell them they loved them. The pain of being isolated from loved ones we’ve felt in recent months is permanent for the hearts of our Gold Star families.

“Let us never forget them or their sacrifice.”

“Help us to remember the reverence and vow of our departed comrades — not only those bodies, but also those who sleep beyond the seas and other resting places,” French said before a member played “Amazing Grace” on the bagpipes.

Delgado pleaded with his constituents to never forget the sacrifices of fallen American soldiers or their families.

“May we always stand ready to declare our allegiance to our flag, country and Constitution, express our shared commitment to the unity of our nation and promise to defend liberty and justice for all,” he said. “For our fallen soldiers, their families and the meaning behind their sacrifice, let us never forget. Let us bless their souls, and let us never forget.”

The Mellenville and Churchtown fire companies participated in Philmont’s procession down Maple Avenue.