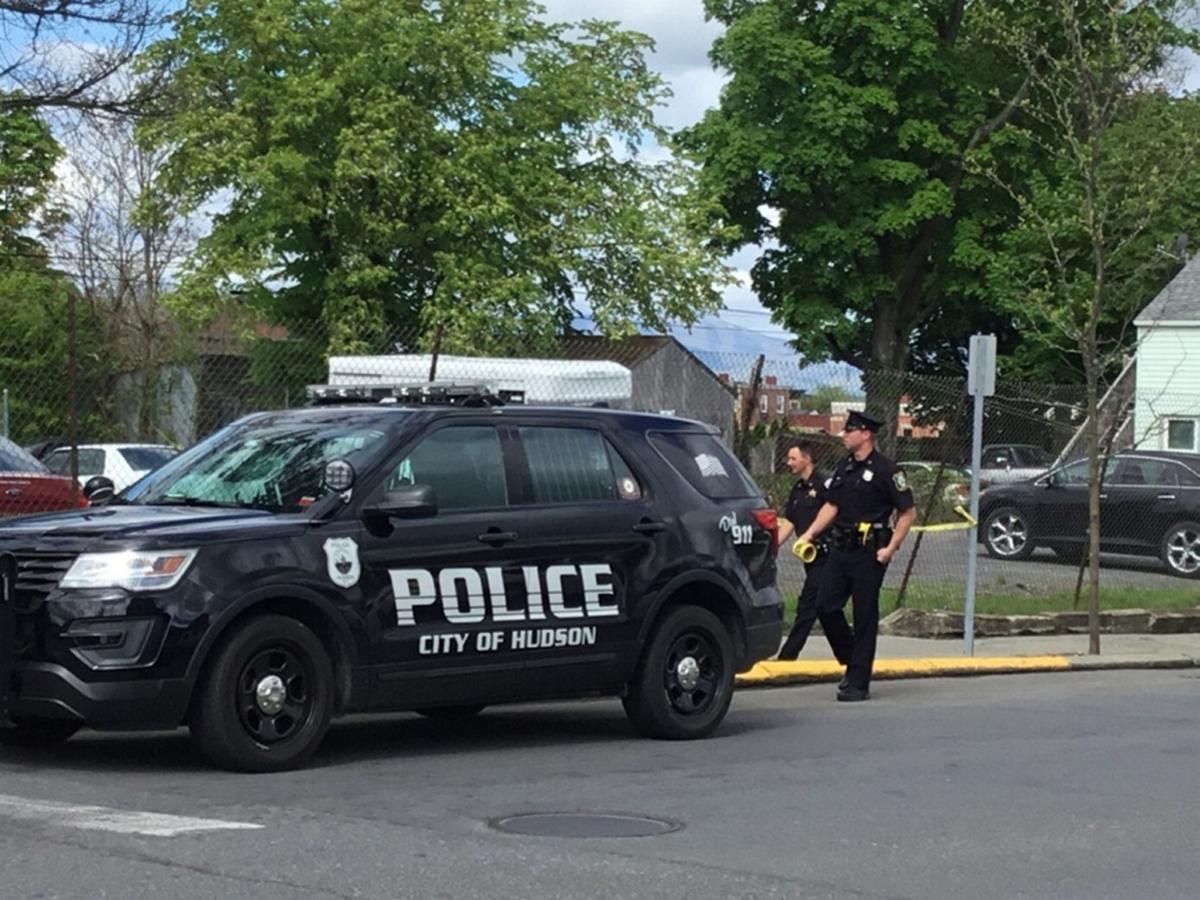 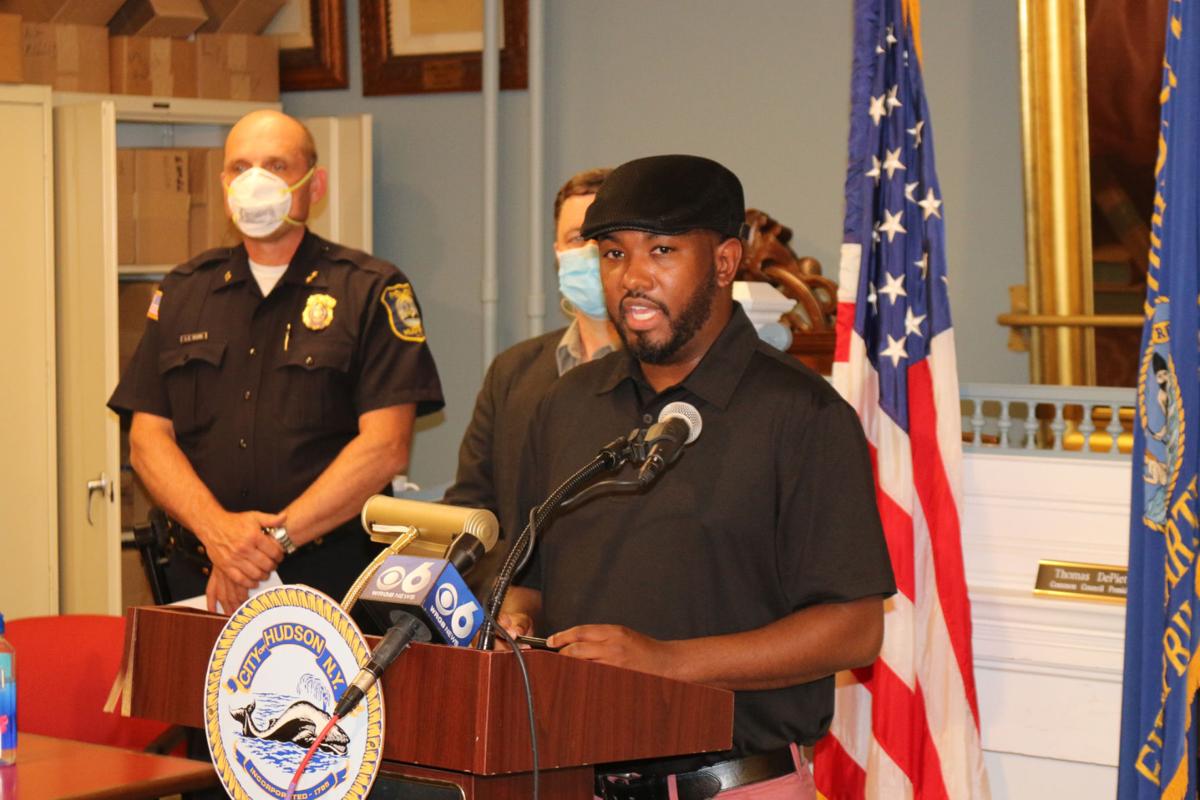 HUDSON — Mayor Kamal Johnson cut the police budget by 10% and announced efforts to improve relations between the police and community members in an executive order Monday.

In addition to the police budget cut, Johnson ordered a freeze on police hiring and created a commission to study police-resident interactions, particularly those involving people of color, mental health issues or substance abuse.

Johnson announced the changes at a press conference at city hall alongside Hudson Police Commissioner Peter Volkmann, Corporation Counsel Cheryl Roberts, and Police Chief L. Edward Moore, who received a copy of the executive order shortly before the press conference was set to begin.

The mayor called for an initial 10% budget reduction and said the police chief and commissioner are considering where cuts can be made. The cuts follow a steep drop-off in city revenues due to the coronavirus shutdown, which temporarily shuttered businesses and halted ticketing.

The 10% reduction will come from equipment and supplies, not personnel, Volkmann said Tuesday.

The order creates a Police Reconciliation and Advisory Commission, made up of two police officers, Dewan Sarowar, who serves as chairman of the Common Council’s police committee, and four Hudson residents, who will be appointed by the mayor.

The commission, which will meet regularly to advise the mayor, will produce a report addressing community concerns by the end of the year.

In an effort to demilitarize the image of the police force, officers may eschew military-style uniforms in favor of less formal attire for certain duties and the city will not accept equipment or vehicles formally used for military purposes.

Johnson, who campaigned on a pledge to improve community policing, said the nationwide protests spurred by the death of George Floyd at the hands of the Minneapolis police have created the conditions for reform.

“There is no better time than now,” Johnson said, noting that the city needs to be “proactive and not reactive.”

As part of the reform package, the city will facilitate conversations between community members and police officers every three months. Officers will be required to attend at least one of the two-hour sessions.

The facilitated conversations are intended to foster improved relationships between the police and Hudson residents, “in the hope of forging better community and race relations,” according to the mayor’s Executive Order No. 21-20, which is available on the city’s website.

The police chief said he welcomes the chance for residents to interact with officers.

“This is a way to clean up some of the ignorance about my department,” Moore said Tuesday, noting that the mayor and the police commissioner will take the lead on facilitating the discussions.

Moore said he believes the community’s confidence in its police officers will increase as a result of the dialogue.

“I support this initiative to the end that I think the public will get a greater opportunity to see what fine young people we have in our department,” Moore said.

Johnson said the conversations will be about building trust.

“We have had numerous situations where there has been violence in our community and no one has come forward to the police because of that lack of trust,” he said. “We want to be able to mend that here in Hudson.”

The city chose to host quarterly community conversations instead of implementing training on race and bias for officers, which Johnson said are not effective in combating systemic racism or racist attitudes.

The four sessions will be about building a bridge between the police and the community, said Volkmann, whom Johnson appointed as police commissioner in December.

Johnson hinted at what a streamlined police force might look like in Hudson if issues related to substance abuse, mental health and homelessness were removed from police duties.

“[Police officers] are not social workers and they are not always equipped to handle these situations,” Johnson said.

The executive order calls for increased funding of social service agencies to direct people away from the criminal justice system and creates a program called Hudson Cares, which will link residents to resources for substance abuse.

Hudson Cares will follow the Police Assisted Addiction and Recovery Initiative model, known as PAARI, which has already been used as part of the Chatham Cares 4 U program that Volkmann implemented as Chatham police chief.

The program sees addiction as a disease, not a crime, and allows for residents to voluntarily seek help without risk of arrest. Hudson will follow PAARI’s national standards to integrate residents’ recovery needs into law enforcement policies, Volkmann said.

As mayor-elect, Johnson said he hoped to tackle the opioid epidemic and cited Chatham Cares 4 U as a possible model for Hudson.

Chokeholds are barred, as is the practice known as a “hog-tie,” in which a person’s hands are tied behind their ankles behind their back.

Body cameras must be worn by officers at all times, as is already required, but supervisors will now be required to review footage on a routine basis.

“This is going to take some patience, but together we are going to make things happen here that should happen nationally,” Johnson said.