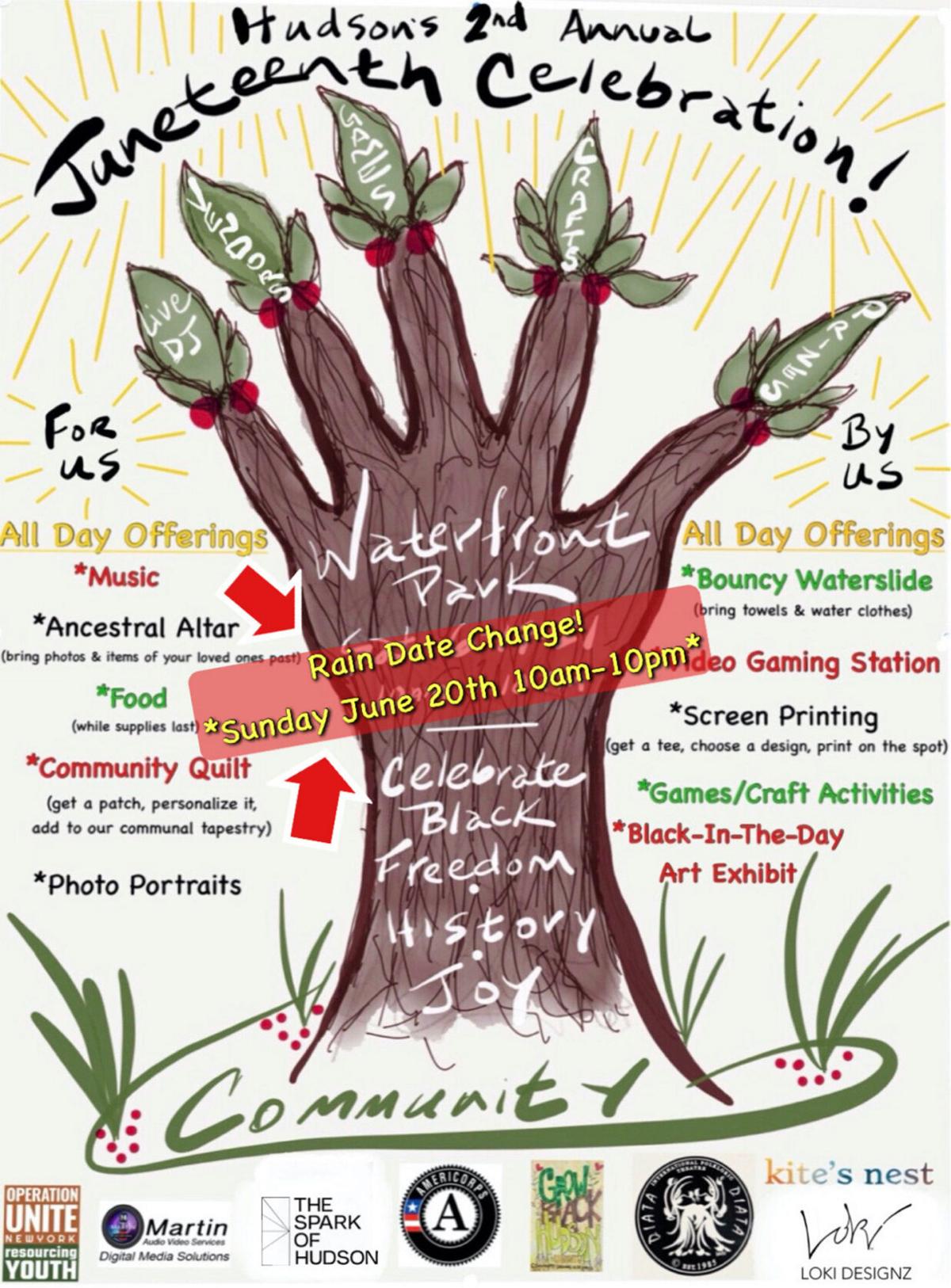 A flyer announcing the events of the Second Annual Juneteenth Celebration on Sunday. 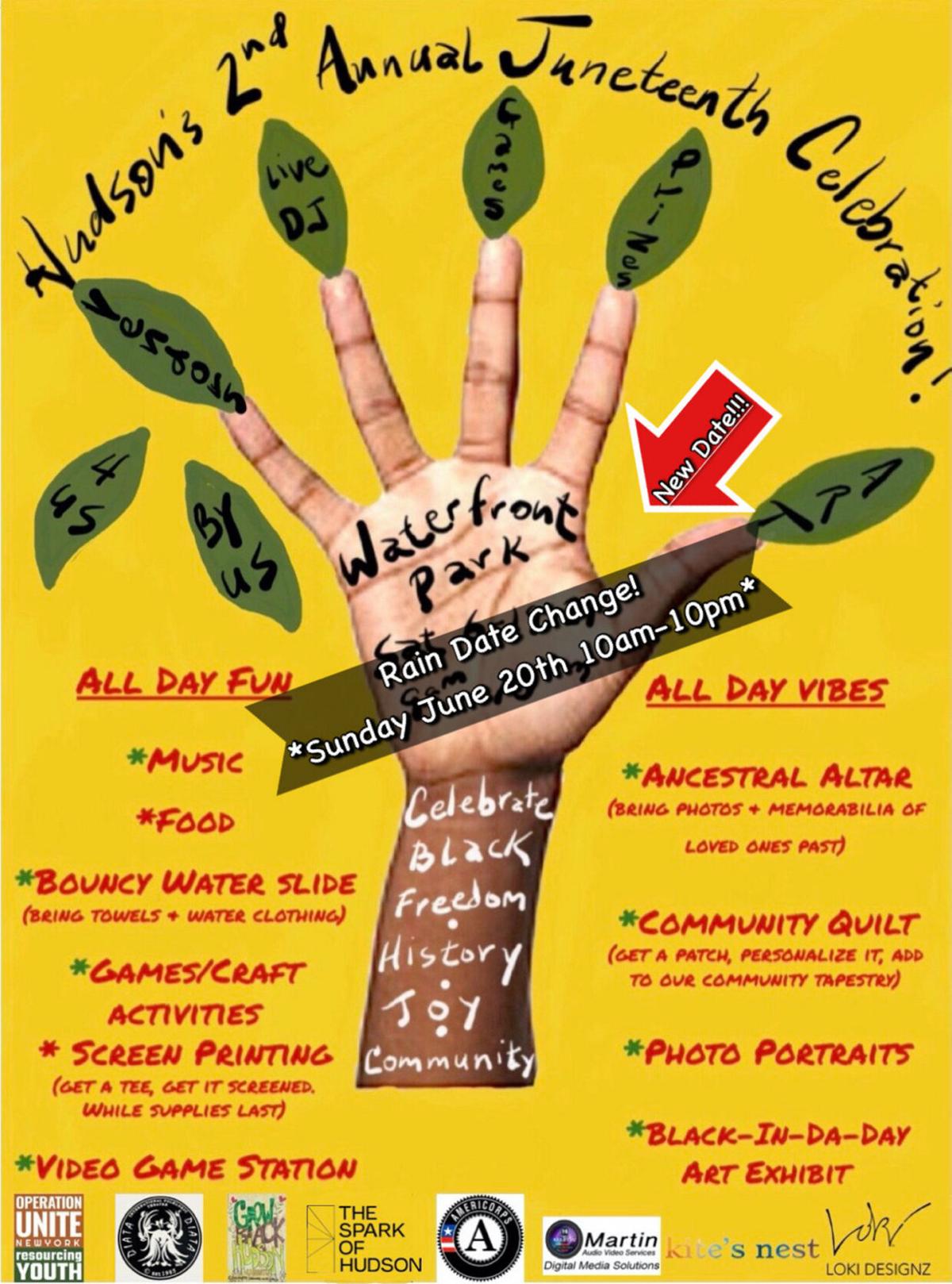 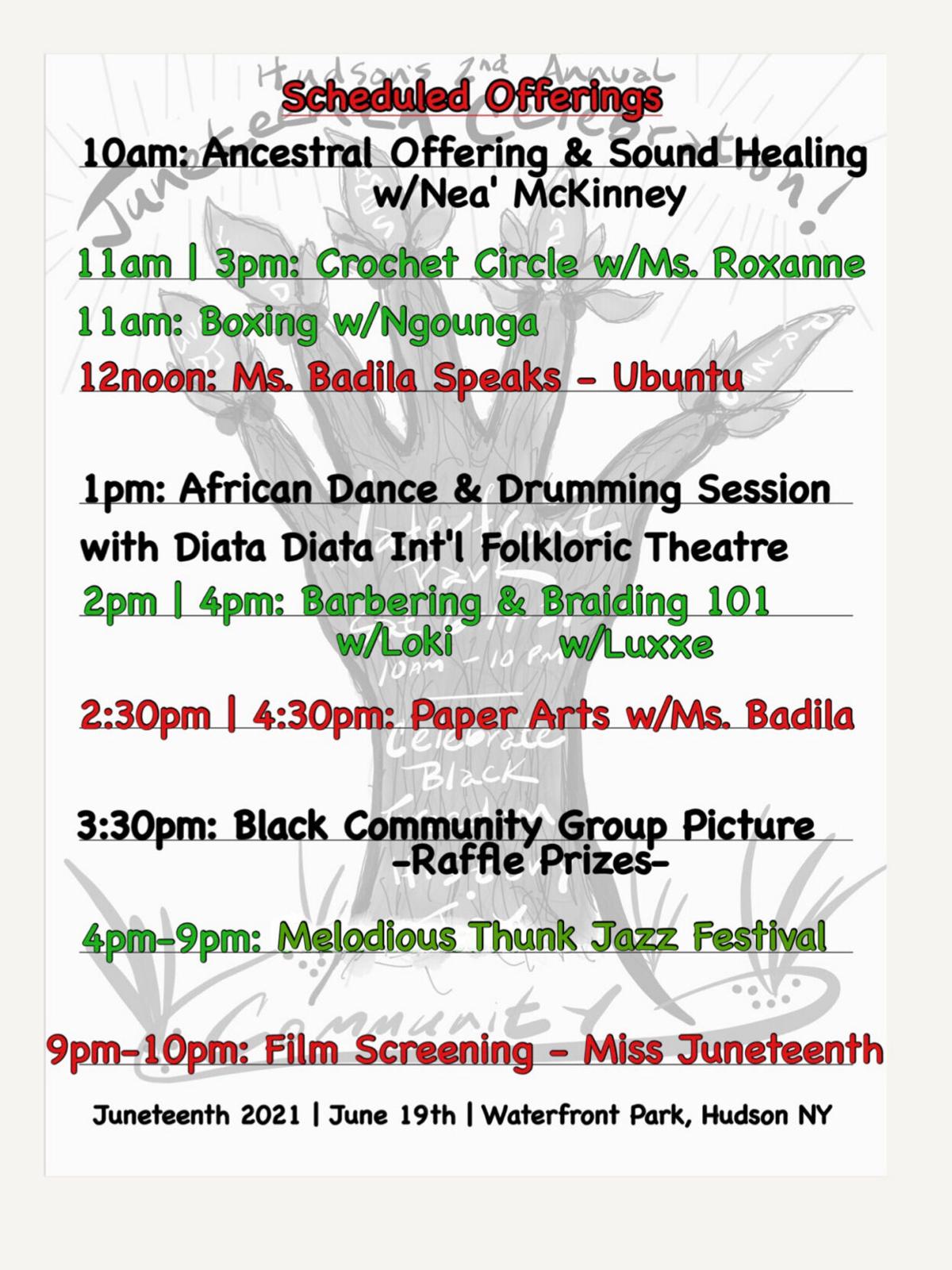 A flyer announcing the events of the Second Annual Juneteenth Celebration on Sunday.

HUDSON — As Hudson celebrates Juneteenth this weekend, an organizer welcomes all but encourages people to be aware of the space they are taking up at the Black cultural festival.

Juneteenth — June 19 — is the day to commemorate the end of slavery in the United States. President Joe Biden this week signed legislation making Juneteenth a federal holiday.

Poet and artist Ifetayo Cobbins and drummer Ngounga Badila will perform on an outdoor stage in front of the Flow Chart Foundation at 348 Warren St. at 3 p.m. Saturday. The event is free and open to the public.

Hudson’s Second Annual Juneteenth Celebration will have festivities from 10 a.m. to 10 p.m. Sunday. The event, initially planned for Saturday but changed to Sunday due to rain forecasts, is organized by Tanya Jackson of Hudson.

Last year’s celebration took place in the form of a block party around Bliss Towers. Jackson described Bliss Towers as ground zero for Black residents in Hudson who were displaced and moved there.

The event had a DJ, free food, drum circle, street activities for kids, Black history coloring pages and community conversations, including one led by LGBTQ community members and another lead by elders.

This year’s waterfront event will be a celebration, Jackson said.

The festival is free and open to the public, but its target audience is the Black community, Jackson said. While all are welcome, those who are not part of the community should be aware of the space they are occupying — for example, giving up their spot to a Black person if an activity is full.

“We welcome everyone but we do want folks to be mindful,” she said, adding the event’s purpose is to celebrate Black culture and freedom.

The activities are designed to reach all age groups, targeted toward children, teens, adults and elders, Jackson said.

“We’re trying to have intergenerational activities that are both specific to certain age groups but also invite the different ages to come together and do things together,” she said.

There will be arts and crafts tables with painting, water-coloring and coloring sheets, lawn activities, as well as a water slide.

Attendees can join a crochet circle, a braiding workshop and learn basics from a local barber.

There will be visual displays exhibiting and honoring Hudson’s Black cultural institutions, past and present.

Jackson has been researching Black community spaces that no longer exist in the city and believes each generation has been losing a space centered on Black culture.

Jackson grew up in Hudson and when she returned as an adult she has struggled to gather Black history in the city. Jackson wants to help create archives moving forward.

On Sunday, people can decorate quilt patches to be made into a community quilt, which Jackson hopes will be assembled in time for the Black Arts Festival in August.

A photographer will be taking free portraits, which Jackson hopes will fill the pages of a community photo album.

There will also be vendors in the park who did not have to pay a fee to set up, Jackson said.

“A lot of Black residents are doing things as entrepreneurs, but they don’t have spaces, so community events become the place they get to sell their works and their goods,” she said.

Jackson emphasized that the event is free to attend.

The Hudson Tourism Board, Spark of Hudson and Out Hudson all donated to the event, along with countless community members who donated in-kind or provided services at a discounted rate, such as Randall Martin’s audio-visual services, Waterfront Wednesday, workshop leaders, Signs & Wonders, A and G Amusements Party Rentals and Staples, Jackson said. Workshop leaders who are getting an honorarium committed to the event before knowing they would be able to get one, she added.

“People are really just coming out and saying, how can we help?” she said.

Melodious Thunk, a jazz and world music festival, starts at 3 p.m. with a free music workshop following by performances at 4 p.m. Bands play until 9 p.m.

After the music, there will be screening of “Miss Juneteenth” at 9 p.m.

Jackson has mixed feelings about Juneteenth being recognized as a federal holiday, saying the acknowledgement is good, but she has concerns about how federal holidays get commodified.

“I have mixed feelings about that,” she said. “I like the recognition as part of American history. It might get in front of the world with really dealing with American history, as far as acknowledgement of and kind of reconciliation of the enslavement, but the way that things get commodified and become superficial is where I get really hesitant.”

While Juneteenth is about celebrating healing and Black people loving themselves, the community continues to struggle, Jackson said.

“Tomorrow and the next time, and up until Juneteenth 2022, we have real community issues,” she said. “So what makes me nervous around things becoming federalized that are pertaining to something that we’re still struggling with, that is where I get hesitant.”

As an example, Jackson saw a car dealership flyer about people freeing themselves from interest rates.

Jackson doesn’t think people really understand the significance of the holiday, she added.

“While Black Americans have been celebrating Juneteenth since 1865, it’s been really recent that so many other people are becoming aware of it,” Jackson said.