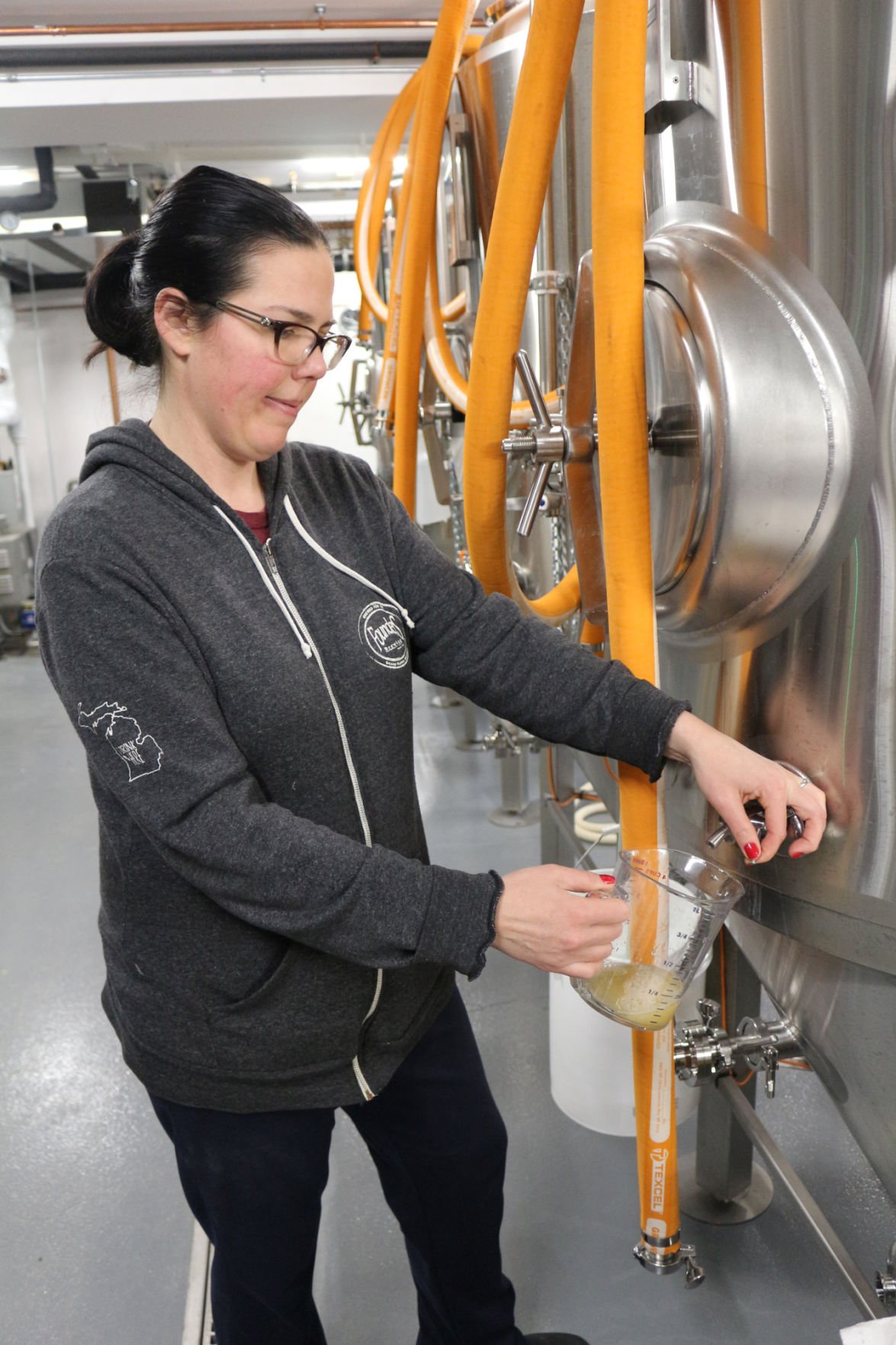 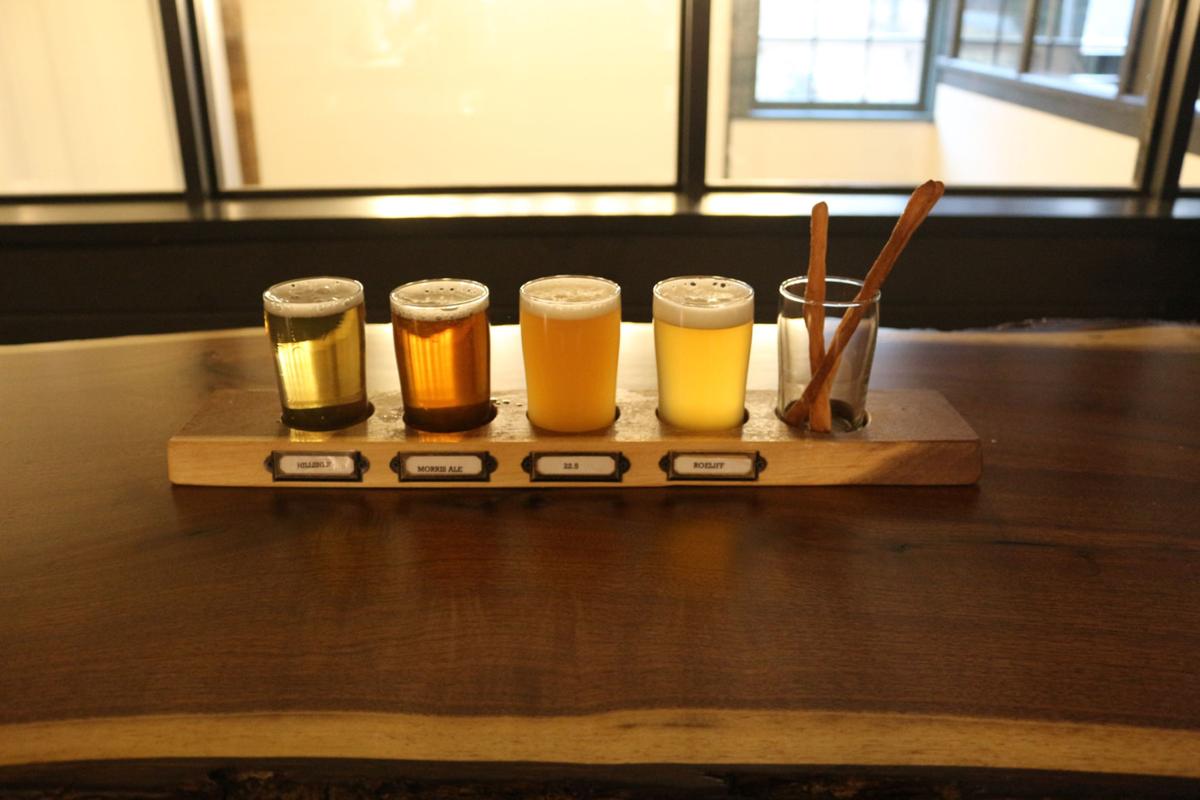 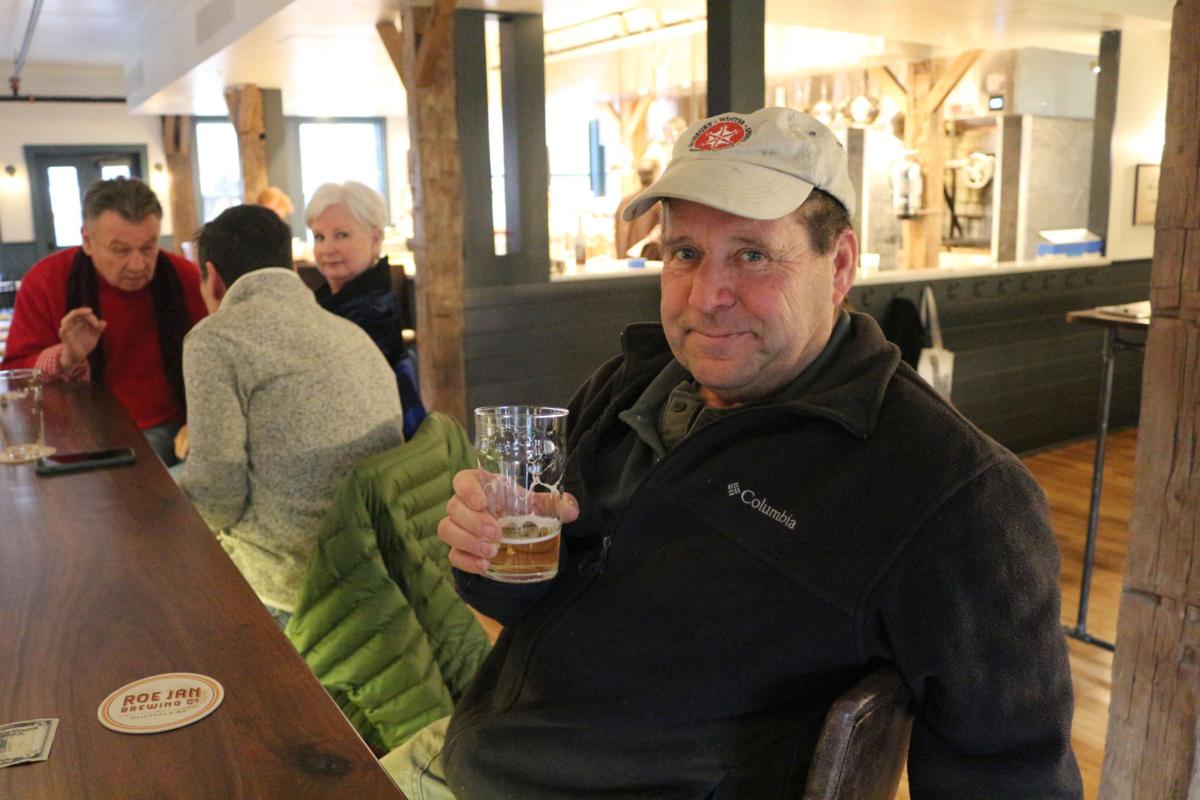 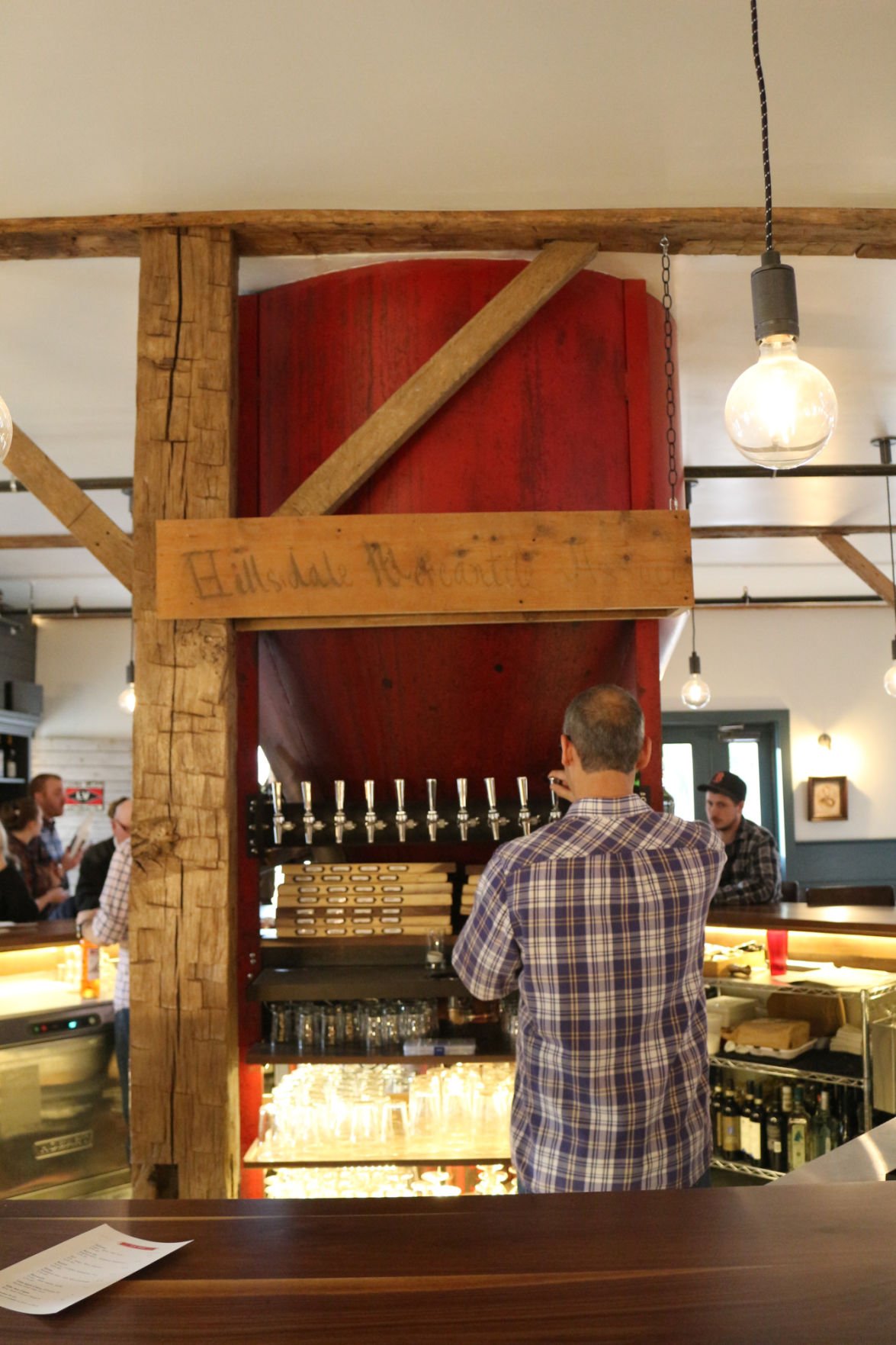 Abby Hoover\Columbia-Greene Media A grain hopper remaining from the building's feed store days has been converted into beer taps.

Abby Hoover\Columbia-Greene Media A grain hopper remaining from the building's feed store days has been converted into beer taps.

HILLSDALE — The old Agway is full of life once again as Roe Jan Brewing Company opened Feb. 5 at 32 Anthony St.

Built in 1851, when it was known as the Hillsdale Mercantile Building, Roe Jan owners Steve and Kathy Bluestone bought the building in June 2018.

Over the past 20 months, the building has been restored to its former glory with careful consideration to restore original features, such as the wraparound porch and a grain hopper from its days as a feed store.

“At one point they bottled beer in the basement,” General Manager Joanna Virello said. “I call it the circle of life. It’s appropriate that used grains make beer, so we kept that and put taps on it.”

Guest William Anstett stopped in after his visit at Herrington’s next door to see if the beer was good. He sat at the octagonal bar wrapped around the hopper, which has been converted into taps. He gave the beer a thumbs-up.

Kathy Bluestone said opening a brewery was on her husband’s bucket list.

“It was a surprise to me, but something he had been thinking about for a while,” Kathy Bluestone said.

Downstairs in the brewery, Head Brewer Hayley Shine was hard at work crafting both traditional beers, such as ales and lagers, and trendy craft beers like IPAs and sours. Shine studied bioengineering at Berkeley University in California and also makes cider at Little Apple Cidery in Hillsdale.

“When I was in college I had a little chapter where I became interested in wanting to learn how to make everything from the most basic ingredients,” Shine said. She made cheese, coffee and beer, and has been brewing ever since, calling it a “good mixture of art and science.”

The brewery, which uses a seven-barrel Portland Kettle Works system, can produce up to 217 gallons at a time. Guests can purchase a growler of their favorite brew to take home.

The beer is brewed on-site, then stored in large industrial fridges, from which it is pumped directly into the taps above. Six beers and one cider, which will rotate, are on tap.

“We’ve been hard at work creating the opening roster of beers,” Shine said. “Balance is at the heart of our brewing philosophy, both in terms of our range of offerings and the flavor harmony we seek in each beer.”

Shine took a gravity sample of a new beer to test the sugar levels. Once all the sugar is gone, fermentation is done, and the beer is ready to serve. With about 1 percent of the sugar left, Shine said, beer needs a couple of more weeks.

“I’m most proud that there’s a well-balanced lineup of styles,” Shine said. “There’s a mix of modern, traditional, it’s like I’m happiest with the whole picture than any particular one. I’m proud of each beer. They’re exactly what I was going for.”

Shine said she is not just focused on balancing the variety of beers, but on each beer itself.

“Beer’s great with food,” Shine said. “I think a lot of times people talk about wine and food pairings, but I would argue that beer is even better.”

Shine recommends pairing the Emma, a blackberry sour with a hint of lavender, with the Matchstick Salad, which features beets, kohlrabi, apple, celery root and walnuts, because the acidity will brighten the other flavors.

The Mercantile, a smoked porter, is inspired by the wood-fired grill that takes center stage in the open concept kitchen.

The grill is commanded by Executive Chef Charles Kiely, former owner and chef of the Grocery in Carroll Gardens in Brooklyn, for the past 16 years. Kiely has described the fare as an inventive, upscale pub menu.

“We’re dry-curing sausages for our charcuterie plate, baking sourdough bread to turn into bruschetta, and making small-batch spicy ketchup, malolactic fermented pickles, and hand-rolled buns to serve with our burgers,” Kiely said. “There will be plenty of meat and fish coming off the wood-fired grill, and vegetables everywhere, all prepared with skill and thoughtful joy.”

Kathy Bluestone said the wood-fired grill was a natural choice because the woodiness and saltiness of the food makes people want to drink beer. Virello noted that she has seen more and more women drinking beer over the past decade.

“There’s a lot of vegetables on the menu, which I think is really special,” Kathy Bluestone added. “It’s unusual for restaurants in general, and a brewery in particular.”

The brewery created about 30 new jobs in the community, but the Bluestones have found that many of their customers on opening weekend were traveling through Hillsdale on their way to other destinations.

The establishment is named for the Roeliff Jansen Kill, a river that flows through Columbia County, Hillsdale and south through Dutchess County, where it meets the Hudson River.

The brewery is situated along the Harlem Valley Rail Trail, which stretches about 11 miles from Hillsdale to Wassaic.

The trail includes a five-mile section completed from Under Mountain Road to Orphan Farm Road and a 1.5-mile section from Black Grocery Road to Anthony Street in Hillsdale.

The section connecting Millerton Station to Under Mountain Road is scheduled to be completed by October 2020.

Additional construction is planned and awaiting funding on sections expanding to Craryville, then north to Philmont, Ghent and Chatham.