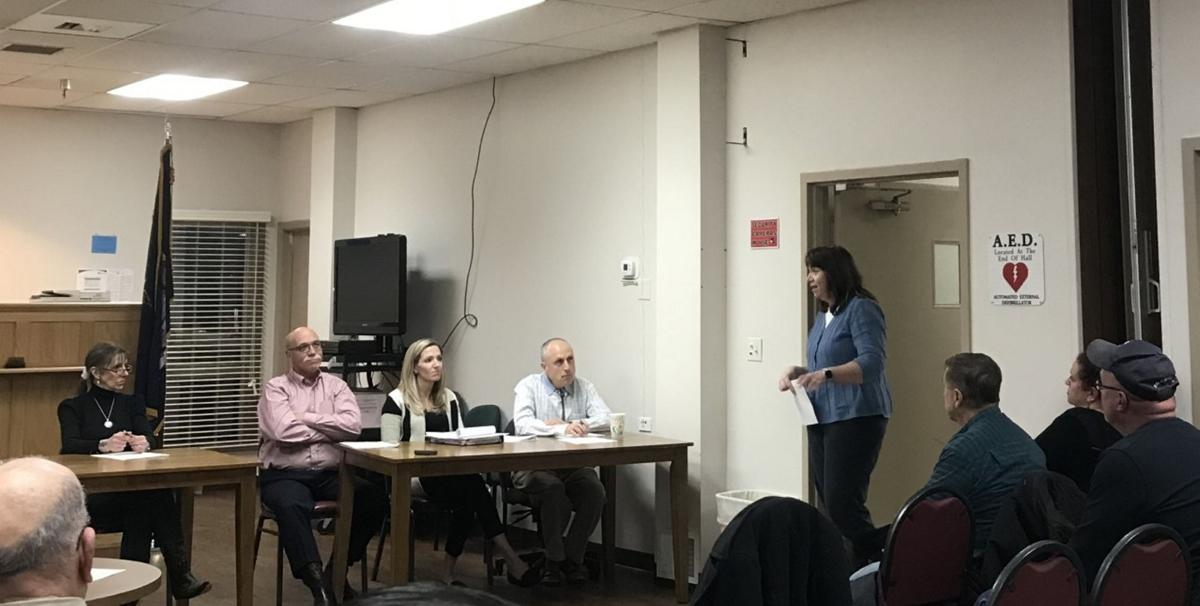 Abby Hoover/Columbia-Greene MediaColumbia County Real Property Director Suzette Booy speaks to the Town Board of Greenport about the revaluation of assessments happening townwide. 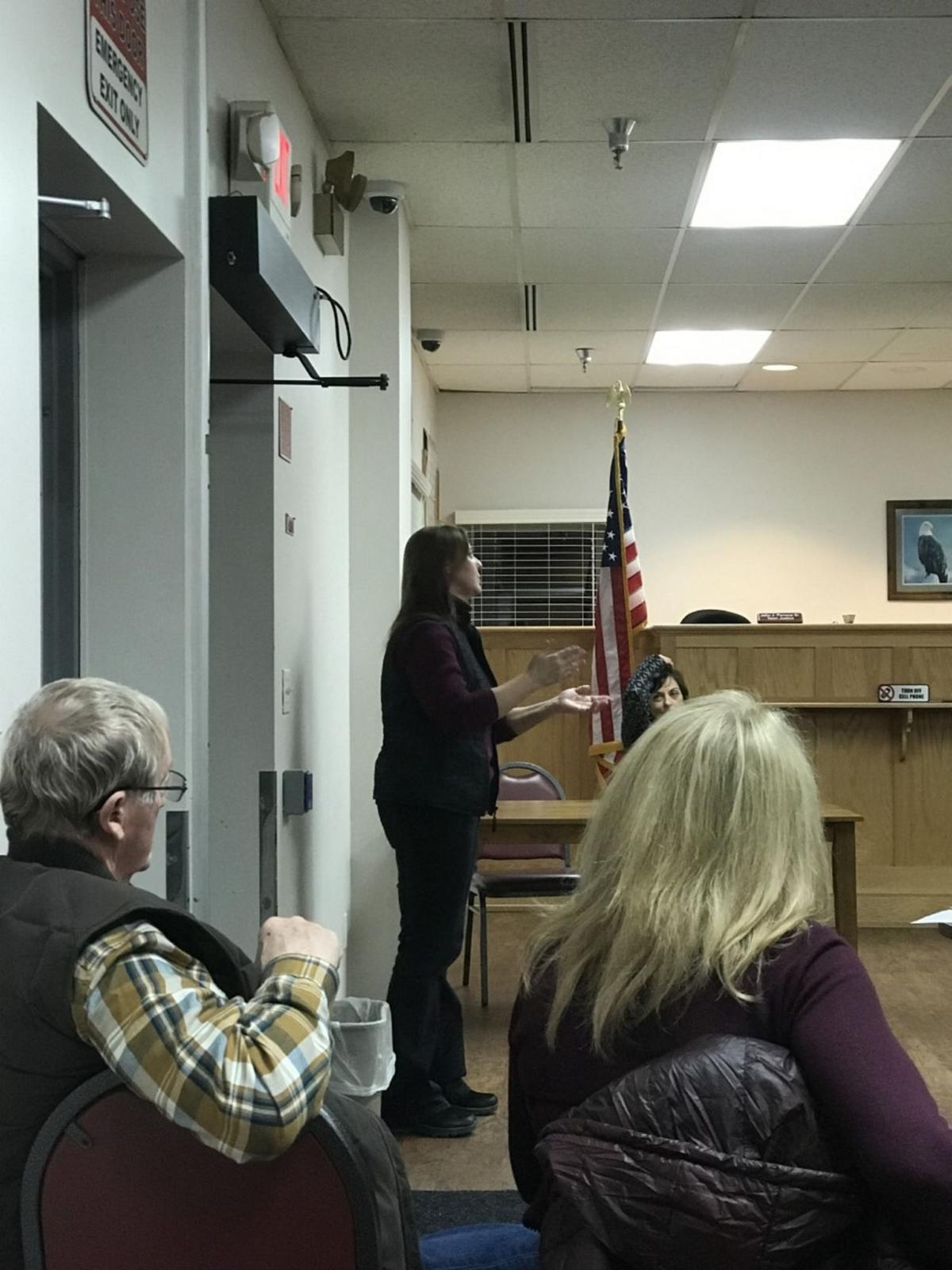 Abby Hoover/Columbia-Greene MediaGreenport Town Assessor Kim Smith explains the process to make a grievance for assessments to the Town Board of Greenport.

Abby Hoover/Columbia-Greene MediaColumbia County Real Property Director Suzette Booy speaks to the Town Board of Greenport about the revaluation of assessments happening townwide.

Abby Hoover/Columbia-Greene MediaGreenport Town Assessor Kim Smith explains the process to make a grievance for assessments to the Town Board of Greenport.

GREENPORT — Town Assessor Kim Smith spoke to the town board Wednesday evening at its regular meeting at Greenport Town Hall about the current townwide reassessment project.

“We’ve worked in cooperation with the county instead of hiring out to another company and we saved thousands of dollars,” Smith said. Columbia County Real Property Director Suzette Booy joined Smith for the presentation.

The last assessment was done in 2015, but Smith said it was not as in-depth as this year’s. The town decided to do a reassessment a couple of years ago since the market in the area continues to change.

“There are going to be some shifts this time,” Smith said. “We’re cleaning it up. This was in-depth [revaluation].”

This is Smith’s fourth revaluation in Columbia County. She previously conducted two in New Lebanon and one in Canaan.

“The county, we contracted with them,” Smith said. “They went around, they did a data collection and verified much of the data that could be seen, more or less, from the public right of way, and then that was entered into the system and notices were sent out to everybody with residential properties asking, ‘Is this correct? And if not, please send it back with corrections on it.’ So, everybody’s had a chance to do that.”

Smith provided an example where she compared four houses and how the effects of the revaluation would impact taxes owed.

Booy said it is not a perfect system, and the county has learned a lot in the process of following Real Property Tax Law. Columbia County Real Property has been credited by the state in the projects that Smith has been completed. She said the goal is to be able to evaluate everyone in the same manner.

“I don’t like to talk about taxes because I don’t make taxes,” Smith said. “We put values on properties; however, people always put the two together, so I though let me just get in front of this and put this out there.”

Smith said the total amount of taxes being collected is not going up, but instead the amount owed is being redistributed to reflect more current property values.

“Sometimes your assessment is one number, and your full value is another number,” Smith said. If this happens, the assessment is not accurate.

If the town did not do a reassessment this year, it would be around 84 percent accurate. With the work already done in this assessment, Smith said it is up 15 percent.

“That’s [a] reason why we like to stay at 100 percent so that everybody understands what they’re actually paying taxes on and being assessed for,” Smith said. “It’s just more transparent and easier for people to understand because this is a complicated system.”

While doing regular maintenance on houses will not likely raise property values, additions such as a deck or new windows, or any substantial remodeling will. However, not everyone’s taxes will increase, even if the assessed value increases. The assessor also uses factors such as recent sales and neighborhoods to value a property.

The notices being sent out toward the end of February will have the prior assessment and the new assessment, as well as instructions for what to do next if recipients disagree. Smith will be available for four days in March to meet about informal grievances by appointment only by calling the County Office at (518) 828-7334. An Informal Complaint form can be found at https://www.townofgreenport.com/assessors-office.html and may be completed and mailed in or dropped off at Greenport Town Hall.

The assessor’s website also has resources such as information on how to estimate the market value of a home, an explanation of assessments versus taxes, and property assessments from past years. Smith said she will leave a list of recent sales in Greenport she has compiled at Greenport Town Hall if people want to come in and use it as a resource.

If property owners, purchasers, or tenants required to pay property taxes, believe the assessment does not accurately reflect the current market value of their property. Smith said property owners will have to do the work and have proof that the assessment in inaccurate and bring that information to their informal meeting. This proof can include a recent appraisal, a comparative market analysis from a realtor or a recent listing agreement.

After March 1, those wishing to contest their assessment must follow the grievance process and submit a grievance form, found on the Town of Greenport website.

“The assessor has the final say in all of the values, but you are lucky to have a very professional, knowledgeable assessor in Kim,” Booy said.