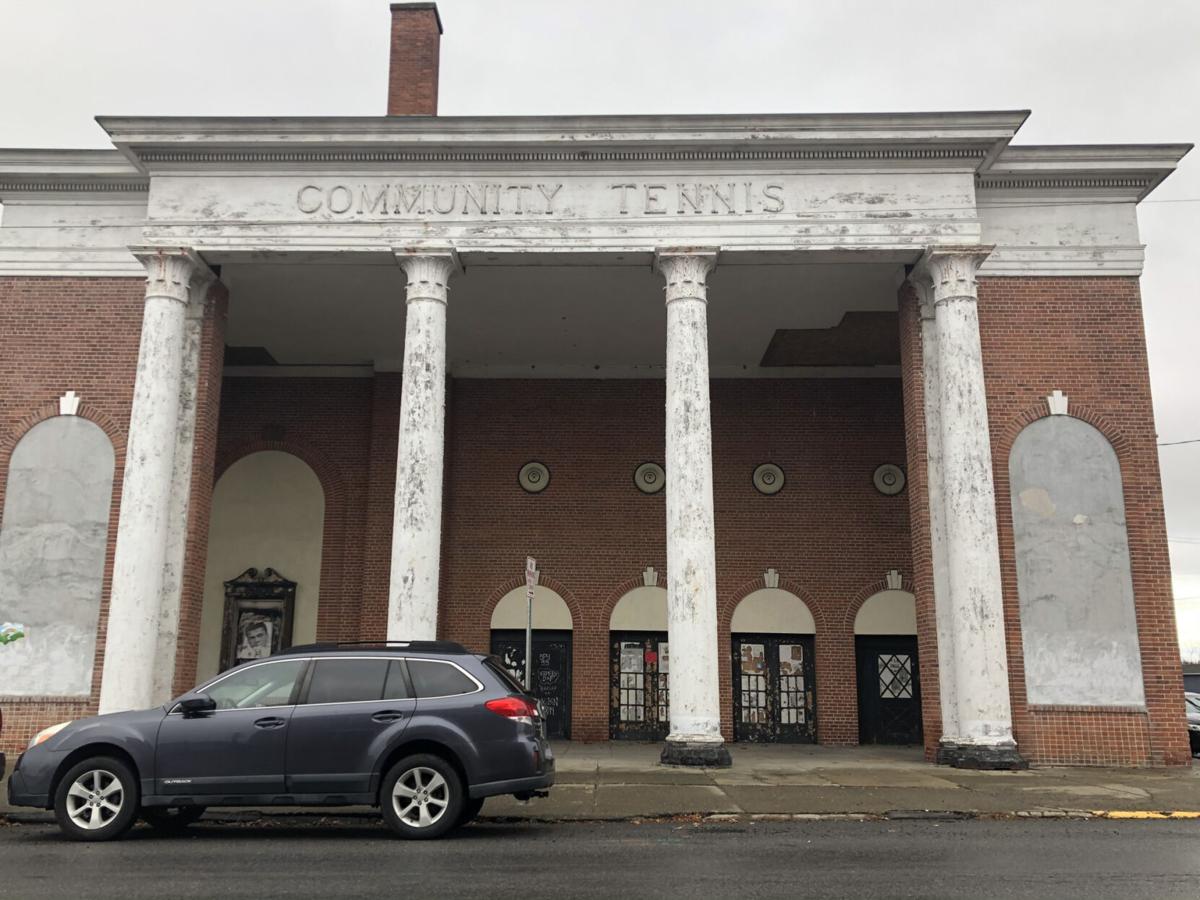 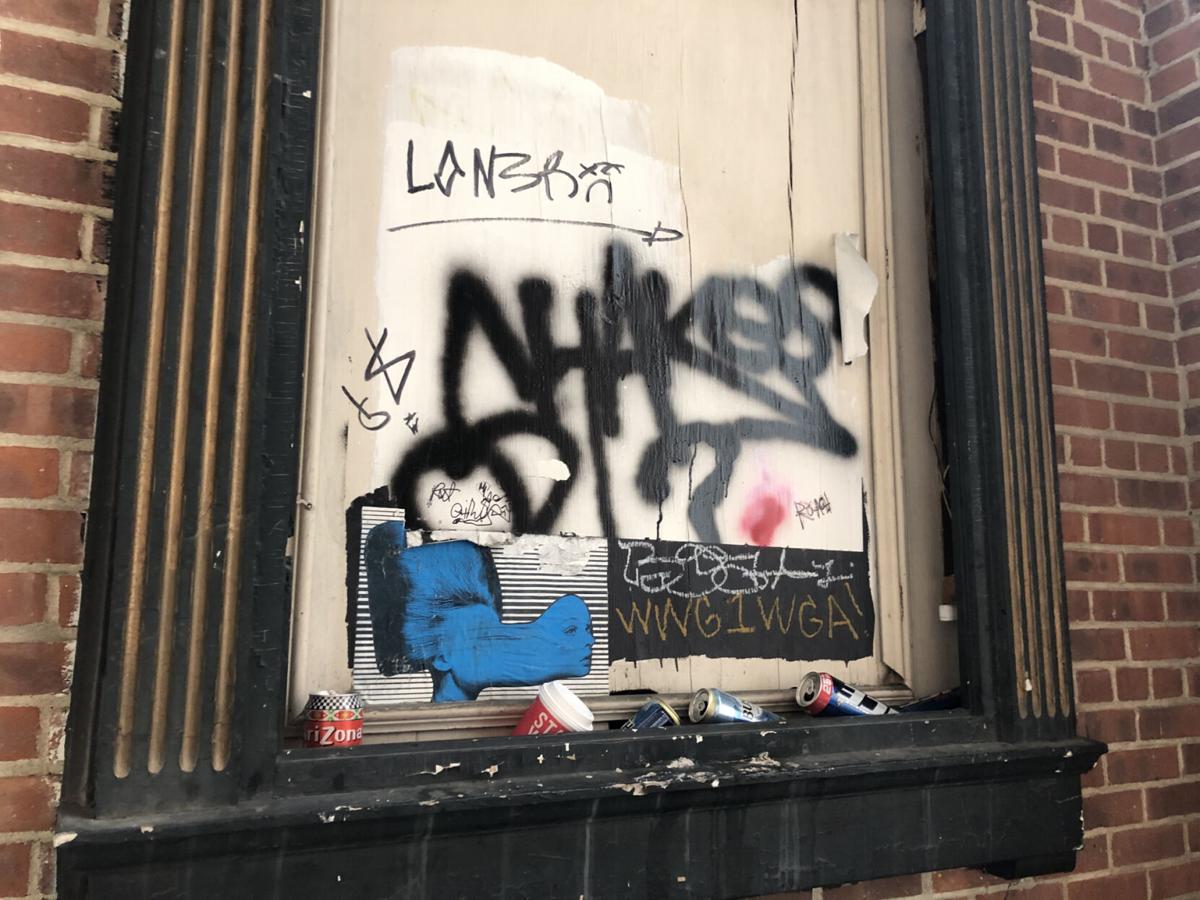 Graffiti and trash mark the former Hudson Community Theater, which has been closed for years. Aliya Schneider/Columbia-Greene Media 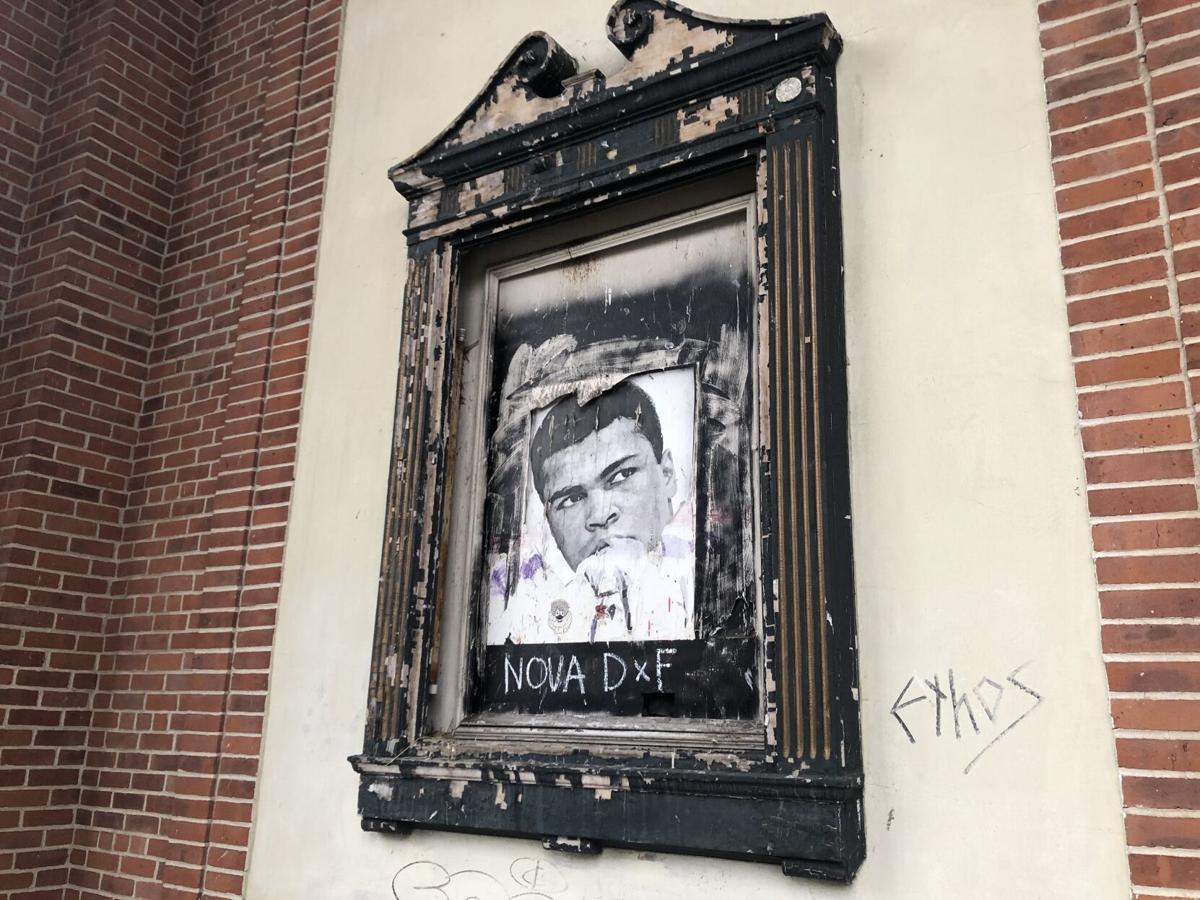 A photograph of heavyweight champion Muhammad Ali outside the building. Aliya Schneider/Columbia-Greene Media 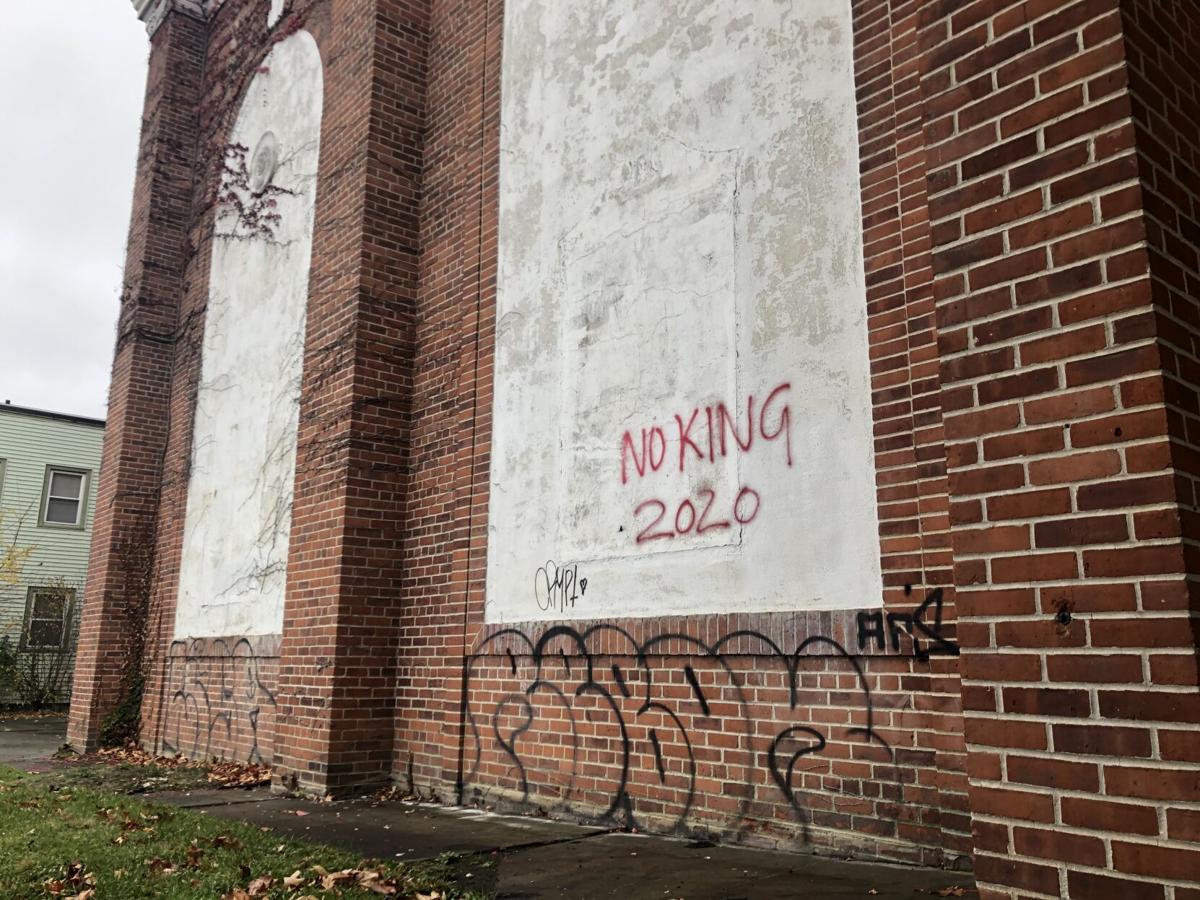 Graffiti on the outside of the former Community Theater. Aliya Schneider/Columbia-Greene Media 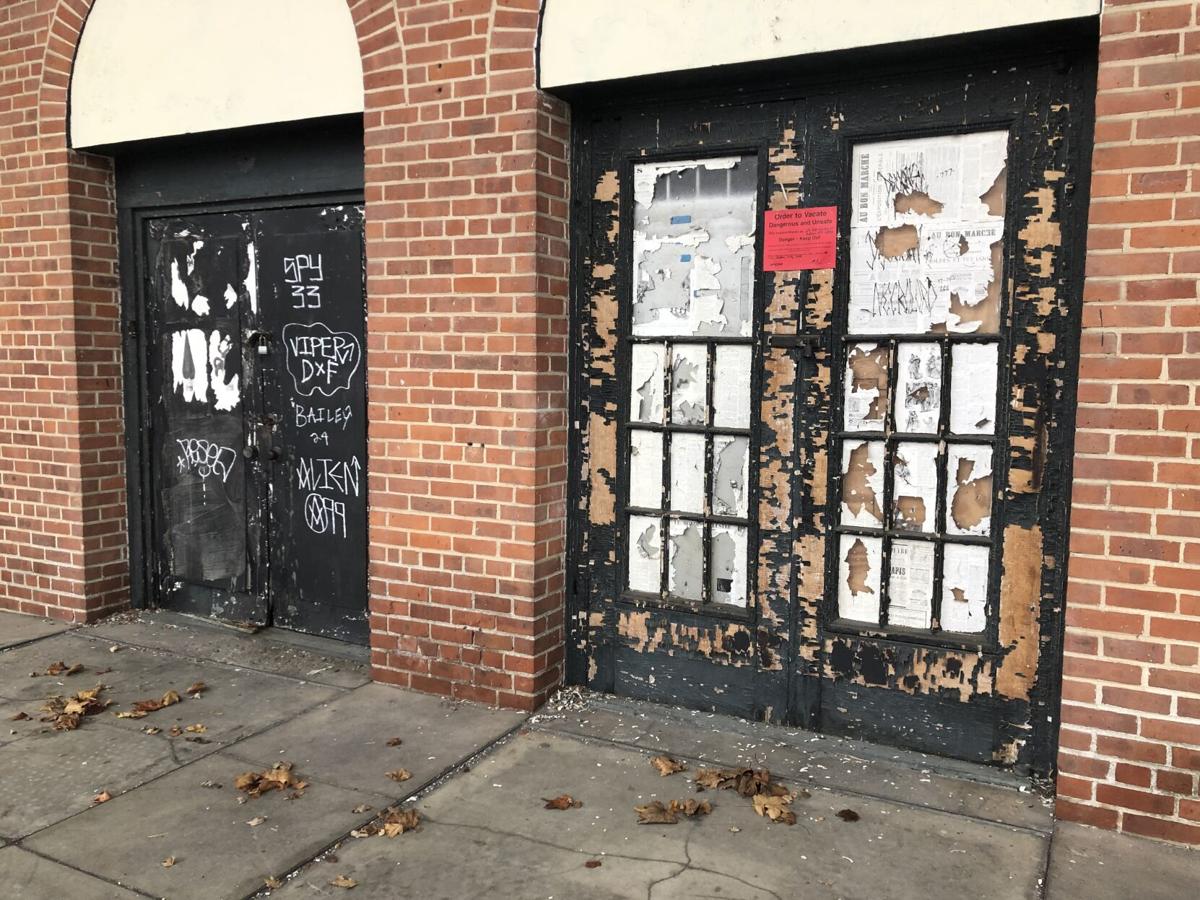 The building is being acquired by the Galvan Foundation. Aliya Schneider/Columbia-Greene Media

Graffiti and trash mark the former Hudson Community Theater, which has been closed for years. Aliya Schneider/Columbia-Greene Media

A photograph of heavyweight champion Muhammad Ali outside the building. Aliya Schneider/Columbia-Greene Media

Graffiti on the outside of the former Community Theater. Aliya Schneider/Columbia-Greene Media

The building is being acquired by the Galvan Foundation. Aliya Schneider/Columbia-Greene Media

The large brick building, which has “Community Tennis” engraved atop its distinctive pillars, is listed for $990,000 on Zillow, a real estate listing site.

One marquee in front of the old movie theater is lined with beer cans and a coffee cup, and another has peeling paint surrounding a picture of heavyweight champion Muhammad Ali, with graffiti below.

The pillar paint is also peeling and graffiti on the doors accompanies a stapled-on sign that reads “Order to Vacate, Dangerous and Unsafe” under Hudson city code.

Galvan’s purchase of the property could be finalized within the next couple of months.

“We expect to complete the transaction in January 2021,” Galvan said in a statement Friday.

The Foundation is purchasing the property from artist Marina Abramovic, Galvan spokesman Dan Kent confirmed. Abramovic, 66, had planned to transform the old theater into a performance art space, but the project never came to fruition.

The 16,665-square-foot building, constructed in the mid-1920s, began as Hudson’s Community Theater, according to Halstead Real Estate’s Zillow listing.

In January, the property was listed by Halstead for $1.4 million, according to Brownstoner Realty in New York City.

“Later uses were an indoor tennis court, movie theater, antiques warehouse and market,” according to the listing.

Williams is now a reporter with Columbia-Greene Media.

The building was divided into a tennis court on one side and a disco-bar on the other, said 5th Ward Alderman Dominic Merante, who grew up in Hudson.

“The bar-disco was in the lobby of the theater,” Williams said. “The tennis court was on the other side of the wall, where the theater used to be. The old balcony was used for storage.”

Nightlife in Hudson meant hopping from one bar to another, Merante said.

“There used to be bars on every corner,” Merante said.

Arthur’s Court would be on the list, Merante said.

Thursday nights were the most popular at Arthur’s Court, Williams said.

“No other bar had customers on Thursdays,” he said. “Everyone was at Arthur’s Court.”

The Department of Youth ran a teen center in the building briefly after Arthur’s Court closed, Merante said.

Later, another bar called “Park 7,” co-owned by a local chiropractor, was in business for a year or two, Merante recalled.

James Goodman Jr. purchased the building from Columbia-Greene Tennis in 1998, according to property records.

He sold the building to Abramovic’s company in 2007, according to county records. Abramovic called off her plan for the building in October 2018.

Abramovic told art curator and critic Hans Ulrich Obrist at a symposium hosted by Swiss museum Fondation Beyeler and UBS Art at Serpentine Galleries in London that the project was cost prohibitive at a price tag of $31 million.

Marina Abramovic did not respond to multiple requests for comment.

The acquisition of the building is part of Galvan’s Depot District Initiative, a mixed-use commercial and residential development.

The Depot District Initiative is intended to create commercial and residential spaces that come together as a new district in Hudson, Kent said.

The building is expected to lead people walking up from Warren Street into the planned Depot District, Kent said.

“It’s the perfect kind of welcome into this exciting new district as people are walking up from Warren Street,” he said.

Galvan does not know how the space will be used, Kent said.

“We haven’t identified a specific use yet,” Kent said. “We’d certainly be interested to hear from potential partners, people with ideas of how they could utilize the space.”

When Galvan purchased the Hudson Armory building, where the public library is now located, they did not know how it would be used, but after conversations with potential partners, they realized a library could meet a community need, Kent said.

“We are open to making exciting ideas possible,” he said. “So part of the ‘how’ is talking to people in the community who want to improve the quality of life in Hudson.”

Galvan Foundation is in the planning stage for their district and expects to present plans in the next couple of months, Kent said.