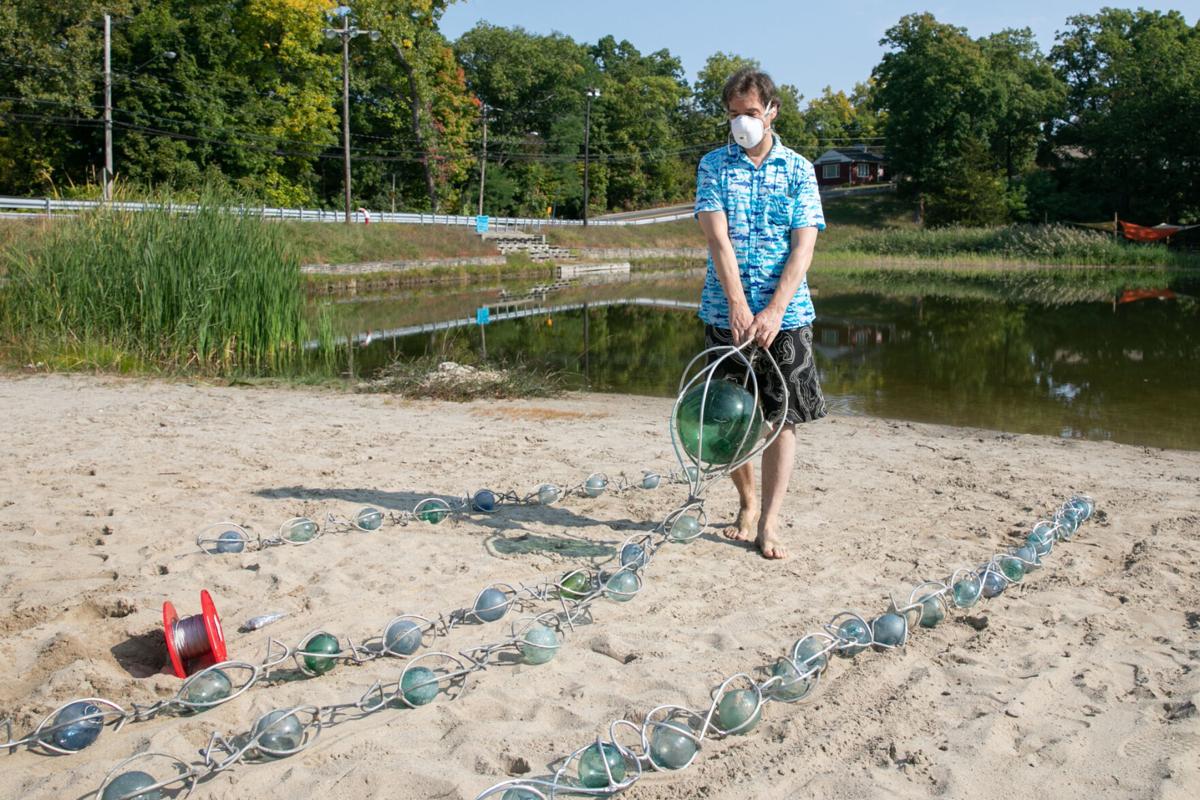 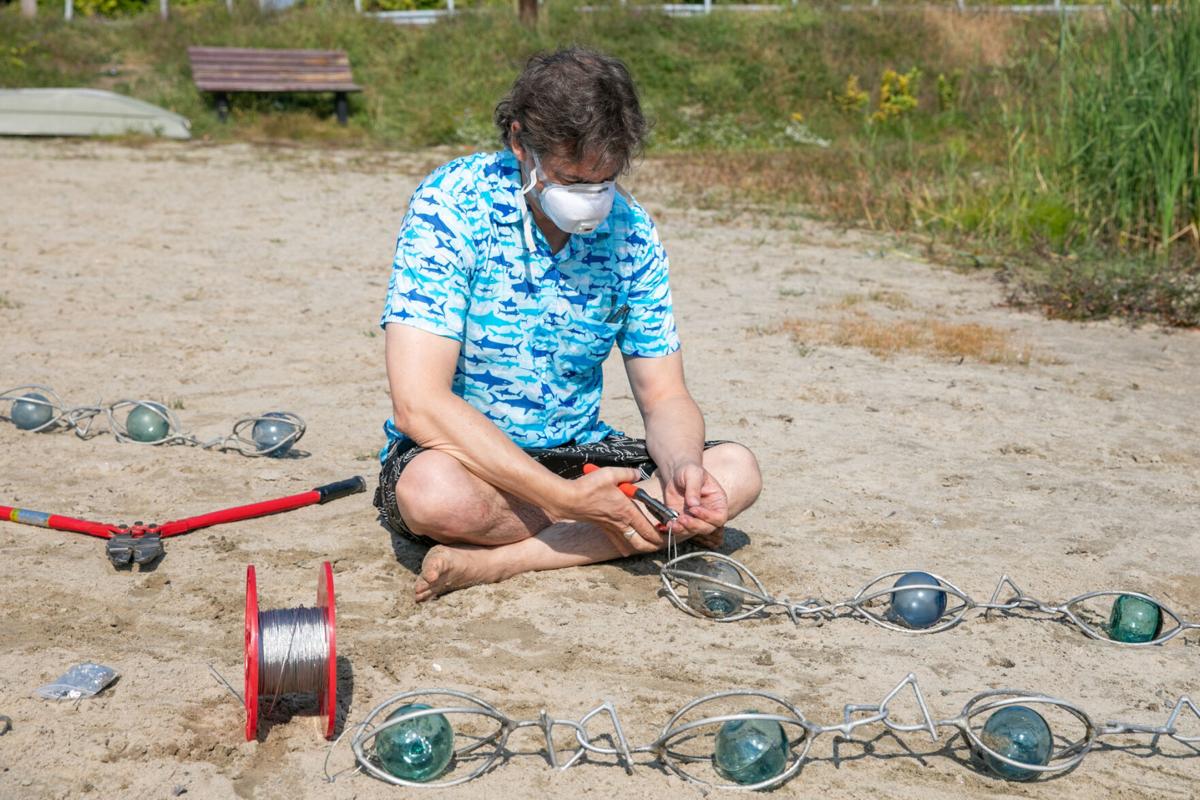 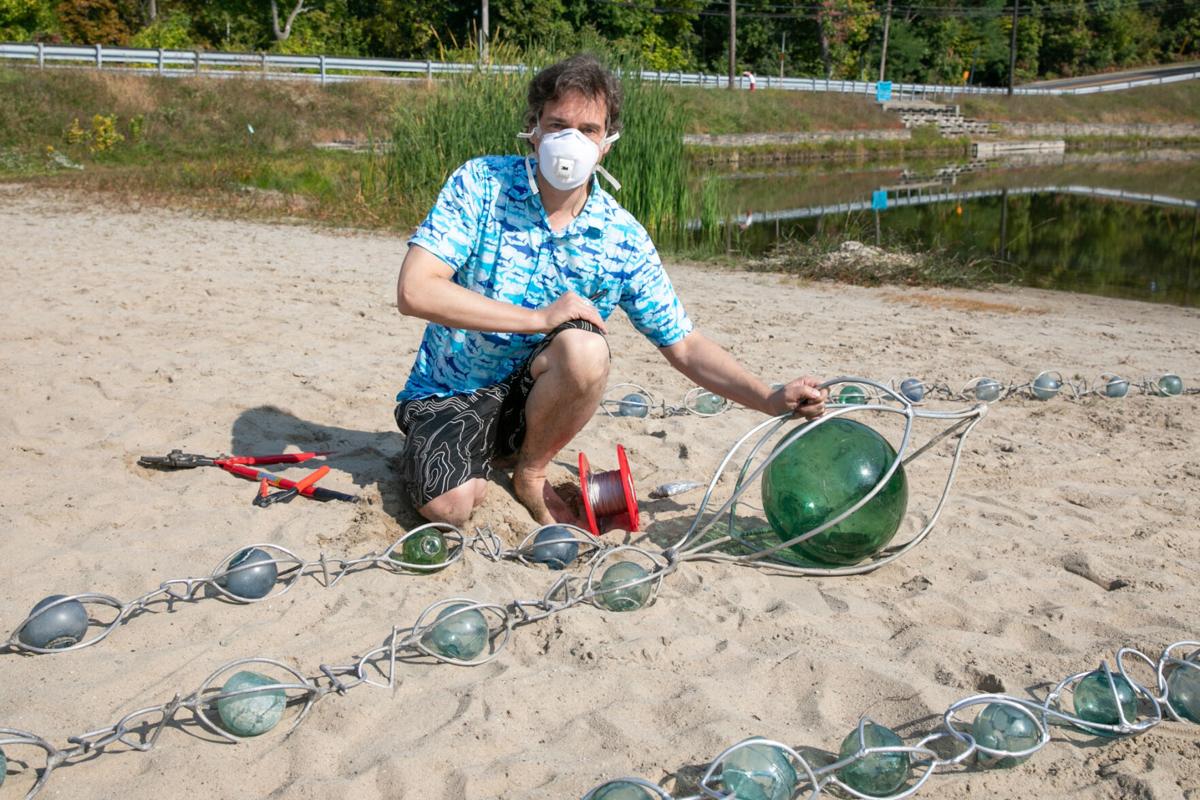 “Also, it is kind of fantastical, the idea of these floating sculptures. It’s very unexpected and it gets you more in tune in a funny way, the kind of unseen qualities of the lake, the movement of the water,” he said.

The installation includes structures made from Venetian glass and aluminum.

The glass pieces were displayed in another version of Flotilla at the Hotel Excelsior in Venice, Italy, as part of the 2007 OPEN10 International Exhibition of Sculpture and Installations curated by Enrico Pedrini.

“These things are hardy enough to live in a Venetian canal,” he said of the glass structures.

The others are welded from aluminum. “They emulate nature, but also suggest civilization,” he said of the aluminum objects.

Rothbart anchored the pieces in the lake, but they are free to float.

Rothbart describes them as kinetic.

“They’re in harmony with the environment to the extent that the wind and water determine their motion,” he said. “Also, they’re very reflective and they suggest nature in certain ways, but they’re not natural.”

The shapes are inspired by animal and tree forms.

The fusion of nature and artifice lends his installation vitality.

“There’s something a little science fiction also, but for me, it’s really inspired by the natural world,” he said.

Flotilla will be accompanied by musical performances and poetry readings. Rothbart will videotape the performers in front of the installation, and they will be viewable on www.danielrothbart.com to comply with COVID-19 safety precautions.

Wayne Koestenbaum and Carter Ratcliff will read poetry and Vladimir Shvets and Oleksandra Hrabova will sing opera arias. Rothbart will record them Oct. 10, Oct. 11 and Oct. 17 and post them online later.

Rothbart, 54, was born in Stanford, California, and lived for a time in Rhode Island. Since 2011, Rothbart has migrated between New York City and Hudson with his wife, Francine Hunter McGivern, a multidisciplinary artist who works with photography and performance. They moved to Hudson full-time following the outbreak of the coronavirus pandemic. Hunter McGivern exhibited “Episodic Memory: 1977 to the Present” at Hudson Hall in 2018. The exhibition will be open by appointment at the Frank Center in Linlithgo.

Rothbart initially applied for a $5,000 grant for Flotilla to be installed in Henry Hudson Park over the summer, but because of the tourism board’s concerns over site permission and project expenses, Rothbart modified his proposal to change the site to Oakdale Park and remove his honorarium, he said, making the grant $1,000.

“All of the grant money now covers honoraria for the performers and some of my out-of-pocket expenses,” he said.

Modifications that delayed Rothbart’s initial proposal turned out for the better.

“Now that it’s ready, the water is so cold that there aren’t swimmers and I can put them where I want,” he said. “The lake is like a canvas.”

Rothbart has always been drawn to Oakdale Lake, he said.

“I always found the lake to be extremely pristine and beautiful and moody and very mutable — always changing,” he said.

Tourism board member Tamar Adler said Rothbart spoke with the Youth Department staff at Oakdale about why he wanted to install Flotilla there, and invited them to his studio to see the development of the pieces.

“He did community building as part of his installation, which is valuable,” she said.

“Him showing the diversity of art is educational for our community overall,” Lewis said. Lewis said he commends the artists who continue to pour their passion into public art displays.

“Projects like this are proof that Hudson can be, and continues to be, an art community while still being a destination for tourists,” he said.

“We place a high value on walkability, equitability, access for all and tactical urbanism,” Adler said. “Rothbart’s engagement with a city-owned park that has historical underinvestment touched on a number of those values.”

She noted his piece allows viewing from a distance, which is particularly accessible in the time of COVID-19.

“He’s created a COVID-safe public artwork that can be seen from a car or on foot on the Oakdale Trail, or by bike,” she said. “Continuing to provide accessible outdoor recreation is an important part of keeping Hudson open, engaging and safe.”

Oakdale Park is free and open to the public.

“It’s very calm and in my mind, it’s kinda wild, too. It’s got a lot of fish and wildlife around. When I came here this morning there were hoofprints in the sand. It’s not like an urban waterway. I’ve done more with that,” he said.

Rothbart contrasted Flotilla to his exhibit “WATERLINES,” which he performed with dancer Jessica Harris in the Gowanus Canal in Brooklyn in June 2014.

“It was a matter of trying to reframe the way people see this really polluted waterway, but that’s not so much the case here [in Oakdale Lake]. It’s kind of romantic here. It’s sublime nature,” he said.