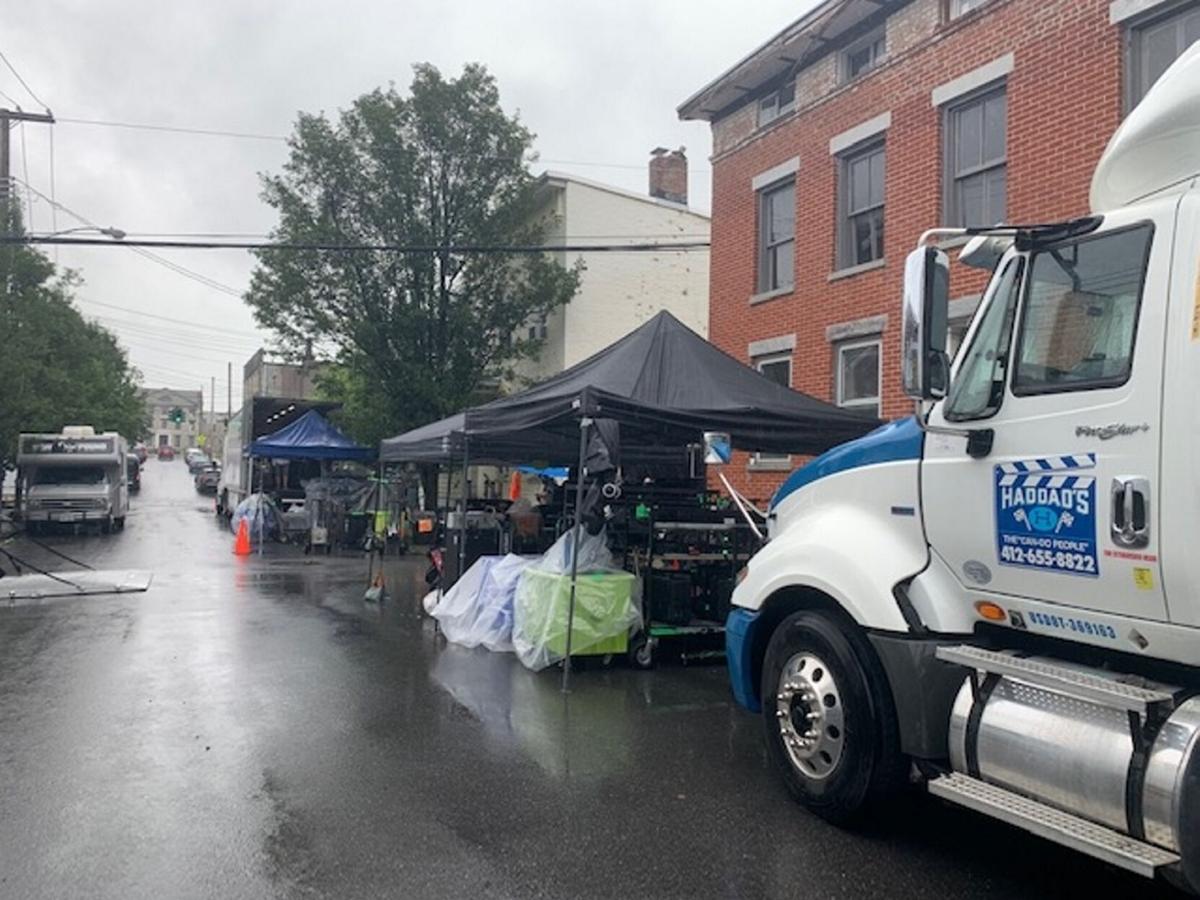 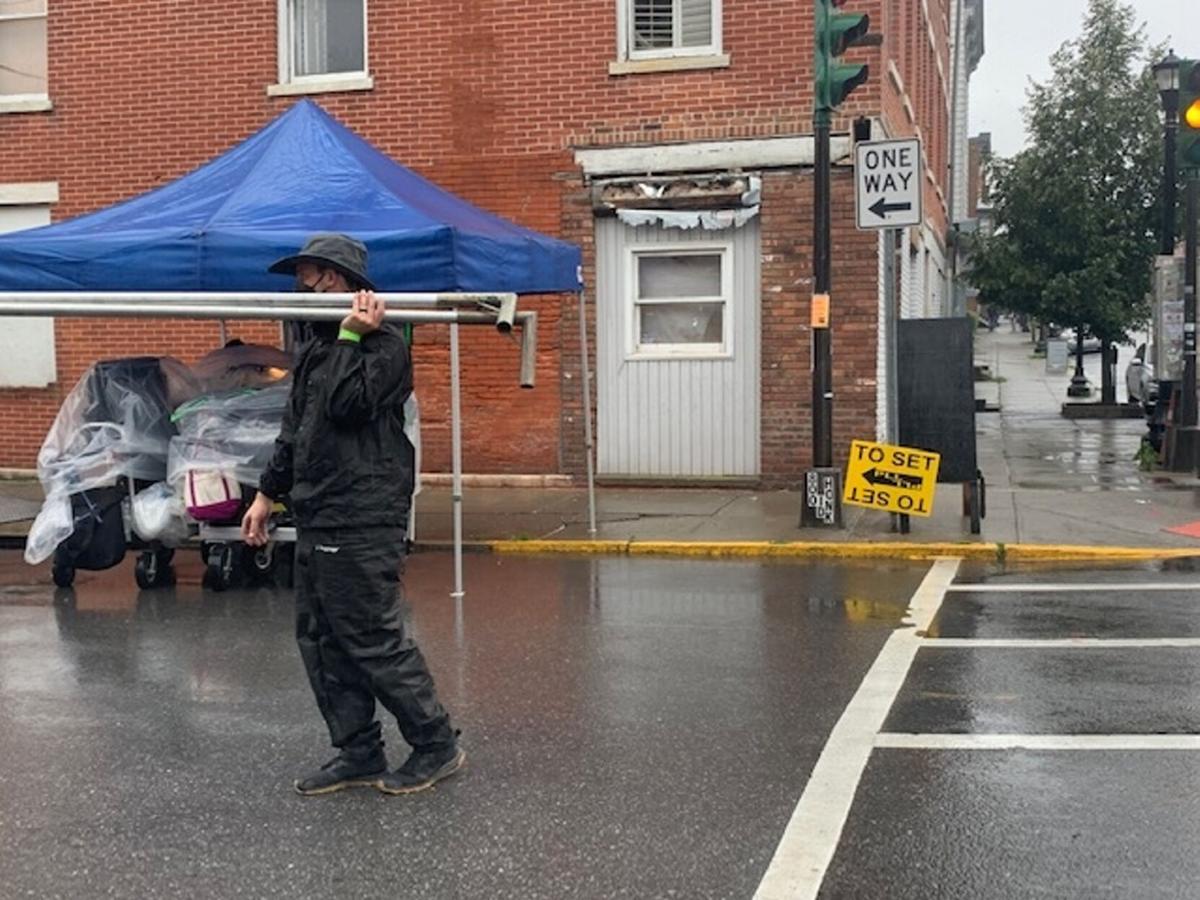 A sign on the corner of Fourth and Warren Streets points toward the “Pretty Little Liars: Original Sin” set.

A sign on the corner of Fourth and Warren Streets points toward the “Pretty Little Liars: Original Sin” set.

HUDSON — On a dark and stormy day, filming began for HBO’s “Pretty Little Liars: Original Sin” in the alleyways of Hudson.

North Center Productions was set up in Prison Alley off Fourth Street on Monday despite the rain with a fog machine and and vintage police car.

Assistant location manager Tim O’Hanlon said about 120 people are working on the set.

The new “Liars,” which is set in the same time and place as the original series that aired for seven seasons on Freeform beginning in 2010, is based on a series of dark youth-adventure novels written by Sara Shepard.

The new series will air on HBOMax.

“Twenty years ago, a series of tragic events almost ripped the blue-collar town of Millwood apart. Now, in the present day, a group of disparate teen girls — a brand-new set of Little Liars — find themselves tormented by an unknown assailant and made to pay for the secret sin their parents committed two decades ago ... as well as their own,” according to a Warner Media statement. “In the dark, coming-of-rage, horror-tinged drama ‘Pretty Little Liars: Original Sin,’ we find ourselves miles away from Rosewood, but within the existing ‘Pretty Little Liars’ universe - in a brand new town, with a new generation of Little Liars.”

The original series starred Sasha Pieterse, Lucy Hale, Ashley Benson, Shay Mitchell and Troian Bellisario. Roberto Aguirre-Sacasa, creator of “Riverdale” (The CW) and “The Chilling Adventures of Sabrina” (Netflix), will serve as executive producer and writer, and Lindsay Calhoon Bring, writer for “Sabrina,” will be co-executive producer and writer, according to Warner Media.

O’Hanlon said the rain from Hurricane Henri, which made landfall on the East Coast this weekend, didn’t disrupt the Monday’s filming.

“The way it works is that they try to build scenarios with interior sets,” O’Hanlon said. Because the scene being filmed in the alley is self-contained, it doesn’t require continuity with other scenes, so the rain isn’t an issue, he said.

Interior sets are located in Saugerties, he said.

The crew planned to be on set the entire day, and with filming set to continue throughout the Capital Region until April, O’Hanlon said filming will probably return to Hudson a few more times in the coming months.

“It’s a very attractive town, but we’re (filming) in the most unattractive parts,” he said.

O’Hanlon said despite some inconveniences for locals, the film industry benefits the community, as the cast and crew require food, lodging and other amenities.

“Any time filming goes on, it boosts the economy,” he said.

Debra Samuels, a resident of Cedar Street, said HBO has been talking with residents of the street about potential houses to film. She and other residents plan to address the village board at Wednesday’s meeting to ask questions about the potential impact of filming.

Cedar Street has homes that were built in the 1920s, and Samuels said her home was built in 1927, which could contribute to HBO’s interest in the street.

Village President Peter Grasse Jr. said at the time the company has been scouting Main Street, the Thompson Street Cemetery and residential Cedar Street for potential filming locations. He said he was “100% sure” at least some filming will take place in Catskill.

According to Warner Media, Chandler Kinney and Maia Reficco have been cast as two of the liars. Kinney plays Tabby, an aspiring director and horror movie buff, and Reficco plays Noa, a striving, sardonic track star who’s working hard to get her life back to normal after a summer spent in juvenile detention.

Bailee Madison has also joined the cast as Imogen Abel, according to a social media post by Madison. Aguirre-Sacasa posted on social media that Malia Pyles was cast as Minnie and Zaria Simone would play Faran, completing the set of five “little liars.”

Aguirre-Sacasa said on social media that Aug. 23 marked the first day of filming and that the first script was titled “Chapter One: Spirit Week.”

“Enjoy the fun times for now, Ladies, the screaming starts on August 23,” he wrote.