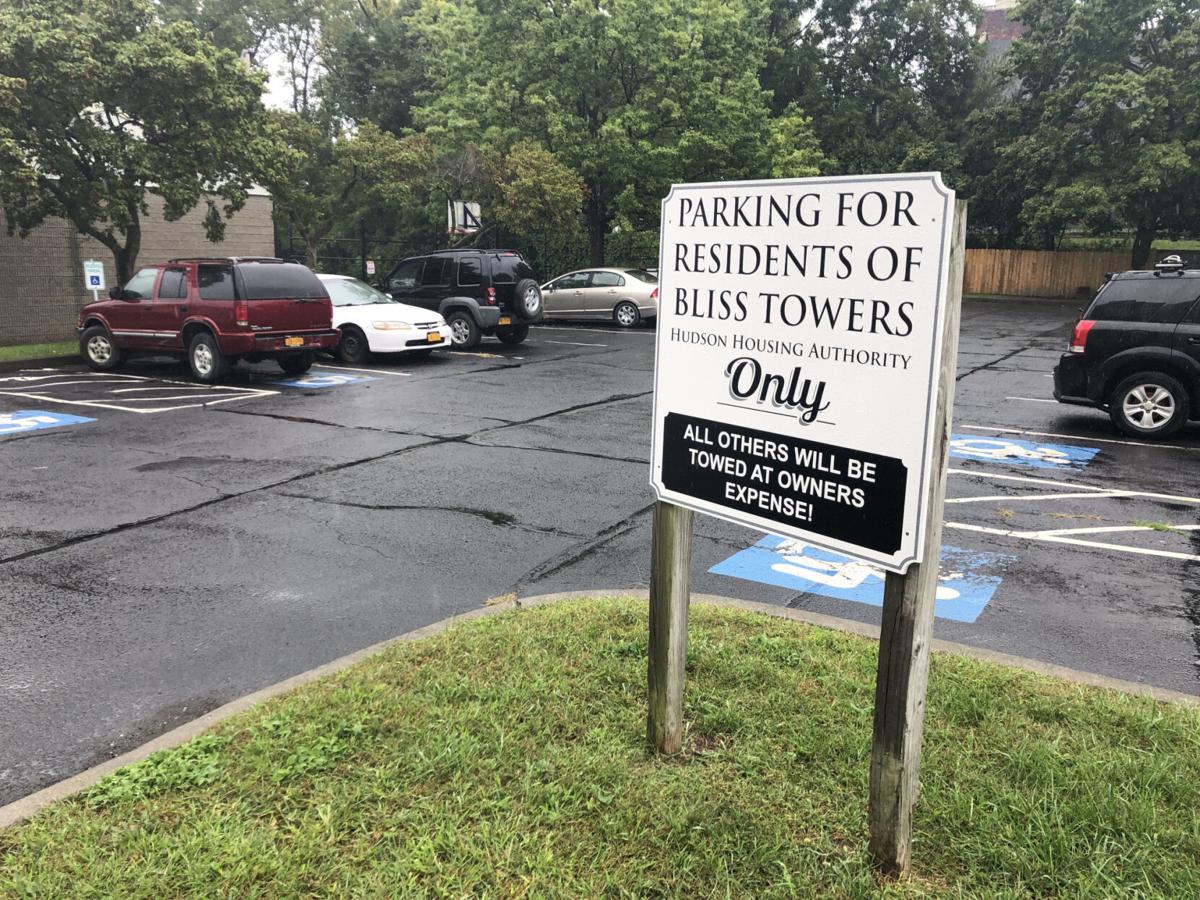 Nonresidents have been parking in Bliss Towers’ residential parking lot next to the basketball court. Aliya Schneider/Columbia-Greene Media Nonresidents have been parking in Bliss Towers’ residential parking lot next to the basketball court. Aliya Schneider/Columbia-Greene Media

Davis brought up the issue at the Hudson Housing Authority meeting Wednesday night.

“It has been a nice quiet summer around the building, I gotta say that. But the problem we did have during the summer was this basketball court situation,” he said.

The basketball court has been the only one in Hudson open to the public, and crowds have been leaving trash and using the tenants’ parking spaces, Davis said.

“Everyone comes down there and the tenants have nowhere to park because the people who come to play basketball are parking in the parking lot. I don’t think that’s fair to the tenants that they can’t park in their parking lot. I understand that’s the only place they can play,” he said. “They should respect that area because that is the only place to play so they should show some courtesy, which they don’t.”

But the courts at Oakdale could not open safely because of the summer camp and swimming that takes place there, Mayor Kamal Johnson said.

“Oakdale is a much larger court and draws a pretty huge crowd,” he said.

Housing Authority Executive Director Tim Mattice agreed that Bliss Towers has experienced problems with visitors using the basketball courts, and even though they still exist, conditions have improved.

“I made the decision to put the hoops back up at Bliss Towers. I didn’t realize that we were the only ones that had basketball hoops available for the community, which was no big deal, at least initially, until large crowds started to gather and the tenants started being inconvenienced because other people were parking in the parking lot. There was lots of garbage, there was drug and alcohol paraphernalia being left behind, and that’s when I contacted Randall [Martin, the Hudson Housing Association chairman],” he said.

Johnson got involved by helping talk to people about being more respectful on the courts.

“I went down and talked to the players directly,” Johnson said, adding they were receptive.

“We were just trying to figure out the best approach to make everybody happy and at the same time allow for them to utilize the court,” Mattice said.

Claire Cousin, 27, of Hudson, a new Housing Authority commissioner, said the best way to continue regulating the courts is to have trusted members of the community approach people in person who are using the courts.

“Yes, the basketball court is for Bliss Tower residents, but let’s be realistic. It’s the only basketball court in walking distance of most housing in Hudson. It’s a place to gather. Unfortunately that comes with some trash, but again let’s look at how many trash cans are actually on State Street,” she said. “That’s a city problem. We can ask the city to provide more trash cans, no? I mean, it’s a bigger picture.” She voiced the value of having the basketball courts available to the public. Hudson Housing Authority Chairman Randall Martin agreed, but added that he doesn’t think there should be negotiations about the parking.

“People playing, that’s the community utilizing the court and being respectful. That’s fine and we want community engagement. But the parking really is just for the tenants,” he said.

Cousin lives in the Hudson Terrace Apartments and usually receives a respectful response when she asks non-residents to move their cars, she said.

“I live in the terrace, so if one of my neighbors decides to throw a party, my parking lot is full. Or if the people that go out for dinner across the street, they take our parking all the time,” she said. “But if I see someone pulling into our parking lot and I notice they’re going across the street, I know that I can take it upon myself to politely ask them, ‘Hey, there’s hundreds of tenants up here, can you try to park on street parking?’ And most times they respect that, and they get in their car and turn around and go away,” she said.

She also said she has seen community members volunteer to pick up trash from the courts after games.

Cousin was appointed a member of the board that day, Martin said.

Cousin is president of the Hudson-Catskill Housing Coalition. She has been an advocate for eight years, she said.

“My hope on the board is just to continue advocating for the people, to get more people involved paying attention to local government and I think it starts where you live,” she said. “I have good intentions and I’m excited to help make some change.”

“You will be a great asset to our board,” Martin said to Cousin.

Also at the meeting, the board of commissioners voted to eliminate fees to residents for the rest of the year after Smith shared that a tenant on unemployment was charged $40 for losing their electronic key.

The charge is to cover the cost of making the key, but the tenant should not have been charged, Mattice said.

“If you give me the name of that individual tomorrow I’ll make sure to reimburse. They shouldn’t even be charged,” he said. “I’ll make sure that my staff knows that there will be no additional charges of that nature. Thank you for letting me know,” Mattice said.