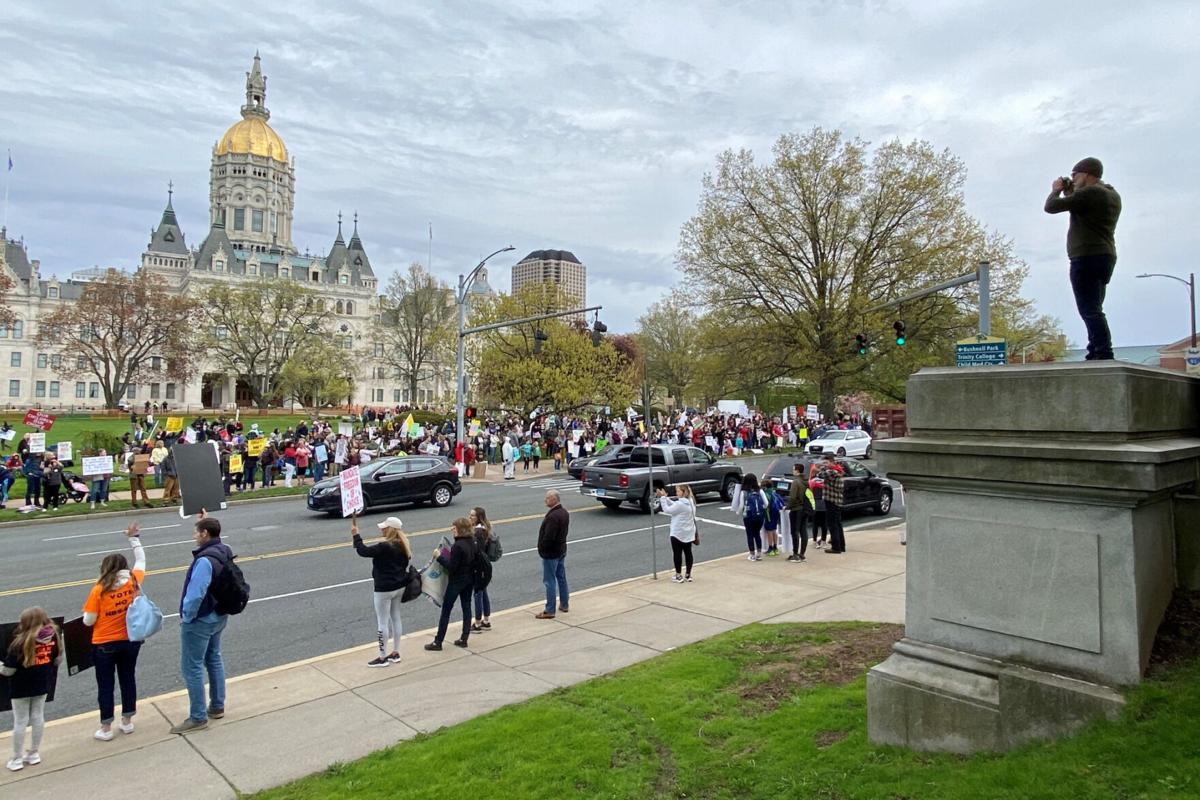 Columbia County locals are pictured at the protest in Connecticut Tuesday with some Albany and Poughkeepsie residents, according to Kress. Contributed photo 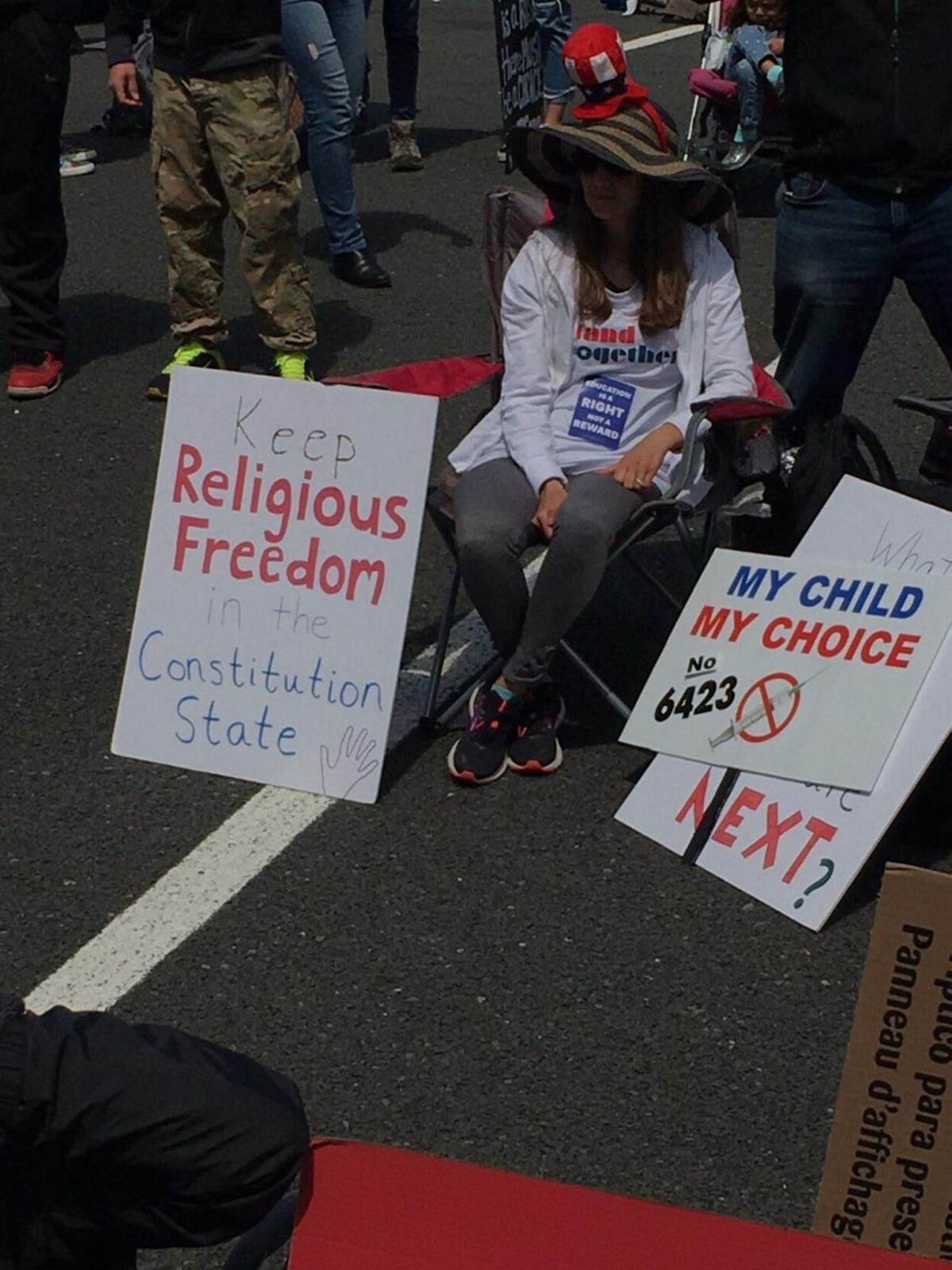 Columbia County locals are pictured at the protest in Connecticut Tuesday with some Albany and Poughkeepsie residents, according to Kress. Contributed photo

Members of a Columbia County anti-vaccination group joined thousands at the Connecticut State Capitol on Tuesday to push to prevent legislation to repeal a religious exemption for required school vaccinations.

Students in Kindergarten through 12th grades required to be vaccinated for measles, mumps and other communicable diseases before entering school. The COVID-19 vaccination is not among the mandated inoculations.

Protesters called on the state Senate to reject House Bill 6423, a repeal of the religious exemption for school vaccinations.

Do We Need This, a Columbia County-based group, urged members in an email to participate in the Hartford, Connecticut, protest as officials push for people to get vaccinated against the novel coronavirus.

“I CAN’T THINK OF ANYTHING MORE WORTH DOING!” Erich Kress, of Livingston, wrote in capital letters in an email Sunday. “PLEASE SET ASIDE WHATEVER ELSE YOU HAVE GOING ON AND BE THERE!”

The rally began with a prayer service and featured several nationally known critics of vaccination mandates, including Robert F. Kennedy Jr. Protesters broke out in occasional chants of “kill the bill,” they vowed to remain on the grounds outside the Capitol until the Senate votes.

“If you have enough people outside it helps the people remember and follow their conscious because they’re actually there to be representing the people, not Big Pharma,” he said.

About 2,000 protesters remained by 9 p.m., Kress said Wednesday. Roughly 30-150 people participate in county-based initiatives, he said. Bigger events in Albany draw around 500, and 2,000 at its largest.

The Connecticut Senate on Tuesday approved a measure to end its religious exemption for mandatory school vaccinations after nine hours of debate. The vote was 22-14, with two Democrats joining Republicans in rejecting the measure. Only students who obtain a medical exemption would be permitted to attend public or private school in the state without a vaccine.

The proposal cleared the House of Representatives last week after 16 hours of discussion. It now goes to Gov. Ned Lamont, a Democrat who has pledged to sign it quickly, making Connecticut the sixth state to eliminate the religious exemption.

Kress, a local farmer, carpenter, beekeeper and woodworker, helped establish the local group Do We Need This. Membership is casual and unofficial, he said, and the organization plans to collaborate with non-profit organization Autism Action Network to send mailers with information throughout the county.

Kress is disappointed the repeal passed, but said the adoption is not unexpected. He argued people should have the choice of what they inject into their body, he said.

Jill Montag, a spokesperson with the state Health Department, recalled Tuesday how vaccines have eradicated debilitating diseases, such as polio, that parents raising children through the 20th Century used to live in fear their children would contract.

“...Thanks to science and the widespread use of vaccines, these fears have become just a footnote in medical school textbooks,” Montag said in a statement. “Let’s be clear, the COVID-19 vaccines are not only safe and effective, they are the weapon that will help us win the war against this dangerous virus and we encourage New Yorkers to heed the advice of trusted public health experts and get vaccinated.”

Health Department representatives did not respond to a query about which demographics or communities in the state are most hesitant to receive the vaccine, or what region of the state hesitancy is most prominent.

The state started several public initiatives, including a Roll Up Your Sleeves and Vaccinate NY campaign with ongoing state-sponsored advertisements, to encourage New Yorkers to get vaccinated against COVID-19.

The Health Department is sensitive about addressing misinformation about the vaccine, according to DOH, which frames graphics as a question-and-answer to refrain from shaming people with concerns about the injection.

Tuesday’s protest focused on repealing the religious exemption. While this week’s fight was largely about religious freedom, Kress said it isn’t about just one religion.

Kress has nine children who are homeschooled or help homeschool the younger kids, he said. Some of his children were vaccinated with certain inoculations, like the tetanus shot. He is not opposed to every vaccine, just the ones that aren’t safe, which he believes to be most of them, he said.

The group handed out fliers in Hudson’s 2nd Ward with information discouraging people from getting vaccinated March 6 — the day of a pop-up vaccine clinic for 2nd Ward elderly, minority and poor residents, according to Bill Hughes. The group had trucks with signs near the clinic.

Hughes, who coordinated the pop-up vaccine site, said most city residents signed up for the clinic and received their inoculations by the time Do We Need This members came by, but he believes others were scared away from getting the vaccine in the future.

A 2nd Ward resident Hughes knows came to get her second shot, but was wracked by anxiety after speaking with members of the group, Hughes recalled.

Pop-up vaccine sites were intended to target vaccinating minority and low-income people who have been hardest hit by the pandemic, Hughes said.

“There’s still a whole lot of people downtown that haven’t been vaccinated and need to be vaccinated and now they’re either apprehensive or they’re not going to do it at all and that’s unfortunate,” he said.

Kress was hesitant to share recent initiatives because of the COVID-19 regulations.

Columbia County Department of Health Director Jack Mabb supports the group’s right to protest, but does not think their views are rooted in good science.

Mabb spoke with some city residents who said some people handing out mailers on March 6 were aggressive in pushing anti-vaccine argument on others. “...Some of the folks that were out, were what they would describe as a little bit more aggressive about it and kind of in people’s faces,” Mabb said, adding the vaccine scares some residents.

Some people who have come to get their inoculation were “shaking like a leaf, afraid to get the vaccine,” yet come anyway, which is courageous, Mabb said.

Kress confirmed Do We Need This members went door-to-door the day of the 2nd Ward pop-up clinic. The purpose of the effort was to educate the public, he said.

“The purpose is just to educate people so they can make good choices for themselves,” Kress said.

Kress stressed that group members should be polite and friendly if they want people to listen to them, but people passionate about their causes can sometimes get excited.

Kristin Buckbee, who participated in the group’s effort the day of the pop-up clinic, said the group went only to one home and rejected claims that members were aggressive.

“We are not interested in coercing people and certainly do not threaten people,” Buckbee said.

Mabb is concerned the group will show up at the school district during vaccinations for 16- and 17-year-old students.

Kress said Wednesday the group does not have plans to visit a local school, but wants to educate parents.

About 150 students expressed interest in getting the vaccine out of 900 eligible in the Hudson City School District, Mabb said. Mabb expressed disappointment in the turnout, but said it’s consistent with county participation at local vaccine pods.

Mabb said some residents believe myths about the vaccine, such as the injection containing a microchip for the government to track people. He is not sure how many people believe the claim seriously.

“Everybody needs to educate themselves when it comes to the vaccine,” he said. “...I trust the science and I think that’s what it needs to come down to.”

Hudson Mayoral Aide and 3rd Ward Supervisor Michael Chameides emphasized Wednesday the importance of the vaccine to curb the spread of COVID-19.

“The key thing is that the vaccine is the most critical thing that we have to avoid the continued spread of coronavirus,” he said, adding the vaccine has been thoroughly tested and is continually monitored at the federal, state and local levels.

“It’s the most important thing we can do to avoid the spread, as a public health issue,” Chameides said.

Chameides has interacted with people with concerns about the vaccine and appreciates due diligence, but said ultimately the science shows the healthy thing to do is get vaccinated.

“Anybody who is actively trying to convince others to not get the vaccine is doing a disservice to the community,” he said.

If you are not opposed to all vaccines then why do your billboards tell people that vaccines are harmful....these folks need to get their message straight!

If they don't want their kids caccinated they have to home school or whatever. They should not be allowed to endanger children or faculty in school