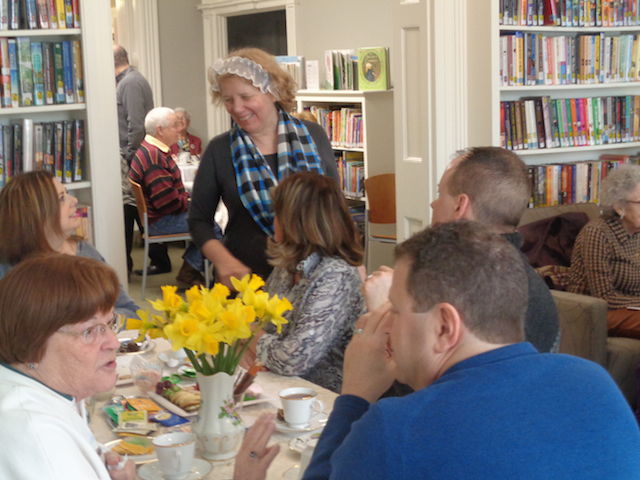 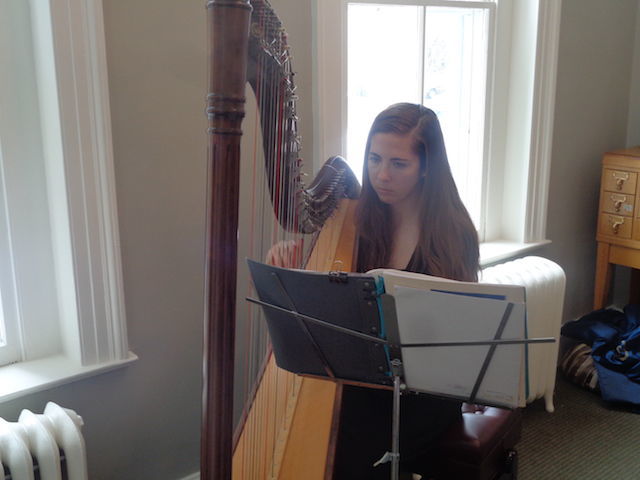 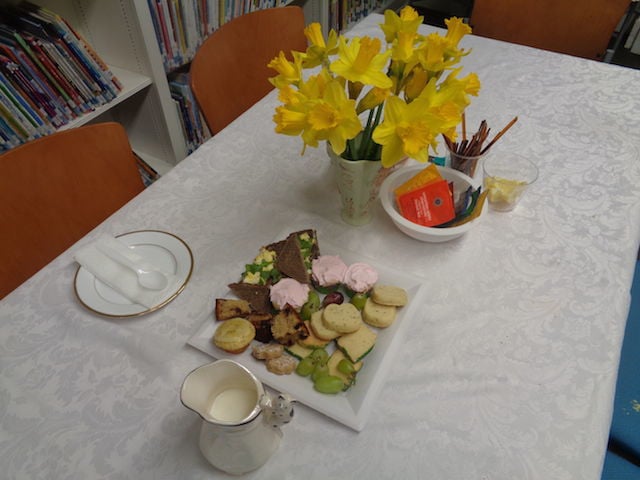 A table at the Heermance Memorial Library set up with bags of tea, flowers, and a plate of sweet and savory finger foods.

A table at the Heermance Memorial Library set up with bags of tea, flowers, and a plate of sweet and savory finger foods.

Tables in three rooms in the library were set up with tea bags, finger sandwiches, fruit and desserts, while Shannon Friel, of Coxsackie, performed music on the harp.

The library has held a tea every year since the village’s 100th anniversary, but because it was the 150th anniversary it was decided that the event would be Victorian-themed, Friends of the Heermance Memorial Library President Cindy Vanhorn said.

The tea is typically held in February, but it was rescheduled this year so the library’s interior could receive a new coat of paint, Vanhorn said.

“We waited until March because the work crew from the prison [Coxsackie Correctional Facility] repainted the whole place,” Vanhorn said.

The foods served used ingredients that were available during the Victorian era like lemon, poppy seeds, lavender and geranium, a type of bedding plant, Vanhorn said. Cucumber was used on sandwiches because it was a vegetable that grew in abundance in England, she added.

“Some of the savory [foods] is done with chives and some is done with rosemary,” Vanhorn said. “All the cheeses came from local farms, believe it or not.”

Eleanor Heermance, the library’s namesake, was active in the village community, as was her father William, who served as county superintendent during his life, Vanhorn said. Heermance’s father served as supervisor from 1828 to 1829 and founded the National Bank of Coxsackie, according to a booklet about Eleanor Heermance, written by Sandra Stephen.

“They were very involved with the [Second] Reformed Church,” Vanhorn said.

Heermance set aside money for what is now the library district, which consists of the village and town of Coxsackie and New Baltimore, in an endowment prior to her death in 1907, Vanhorn said. This endowment was set up so Coxsackie residents could have a library, which was constructed in 1908, according to the booklet.

The money from Heermance’s endowment proved helpful when the library needed a new roof and chimney in 2014, Vanhorn said.

“The money came exactly out of the endowment she had put aside in 1907,” Vanhorn said.

Visitors also had a chance to bid on a painting of a tea bag by local artist Ruby Silvious, which fit in with the theme of the event, Vanhorn said. Silvious had painted pictures of tea bags for a year, which she compiled for a book called “365 Days of Tea” that was also on display, Vanhorn said.

“That’s part of the reason we did it,” Vanhorn said.

Stephanie Stogner, of Coxsackie, brought her 3-year-old niece and was surprised to find her niece enjoyed the cupcakes that were flavored with geranium, she said.

“We can come out and bring my niece and she can experience what people would do back then,” Stogner said.

Becky O’Connell and her husband Rob, also of Coxsackie, visit the library frequently and heard about the event while visiting one day, she said.

“We’re in this library three to four times a week,” Becky O’Connell said.

Becky O’Connell appreciated the paintwork done by inmates from the Coxsackie Correctional Facility and thought the tea was a great opportunity for people to be social and enjoy the beauty of the library.

“I think it’s a great way for people to come out and meet other people,” Becky O’Connell said.

Rob O’Connell enjoyed the snacks available during the tea and Friel’s music.

Courtney Chambers, of Selkirk, has been coming to the tea for several years and believes the $2 cover charge is a good value for all the food visitors get, she said.

“It’s always been a good time — it’s definitely worth the price,” Chambers said. “The harpist is a nice touch.”

For Chambers, who grew up in Coxsackie, it has become a yearly tradition to come to the library for tea.

A spot of afternoon tea